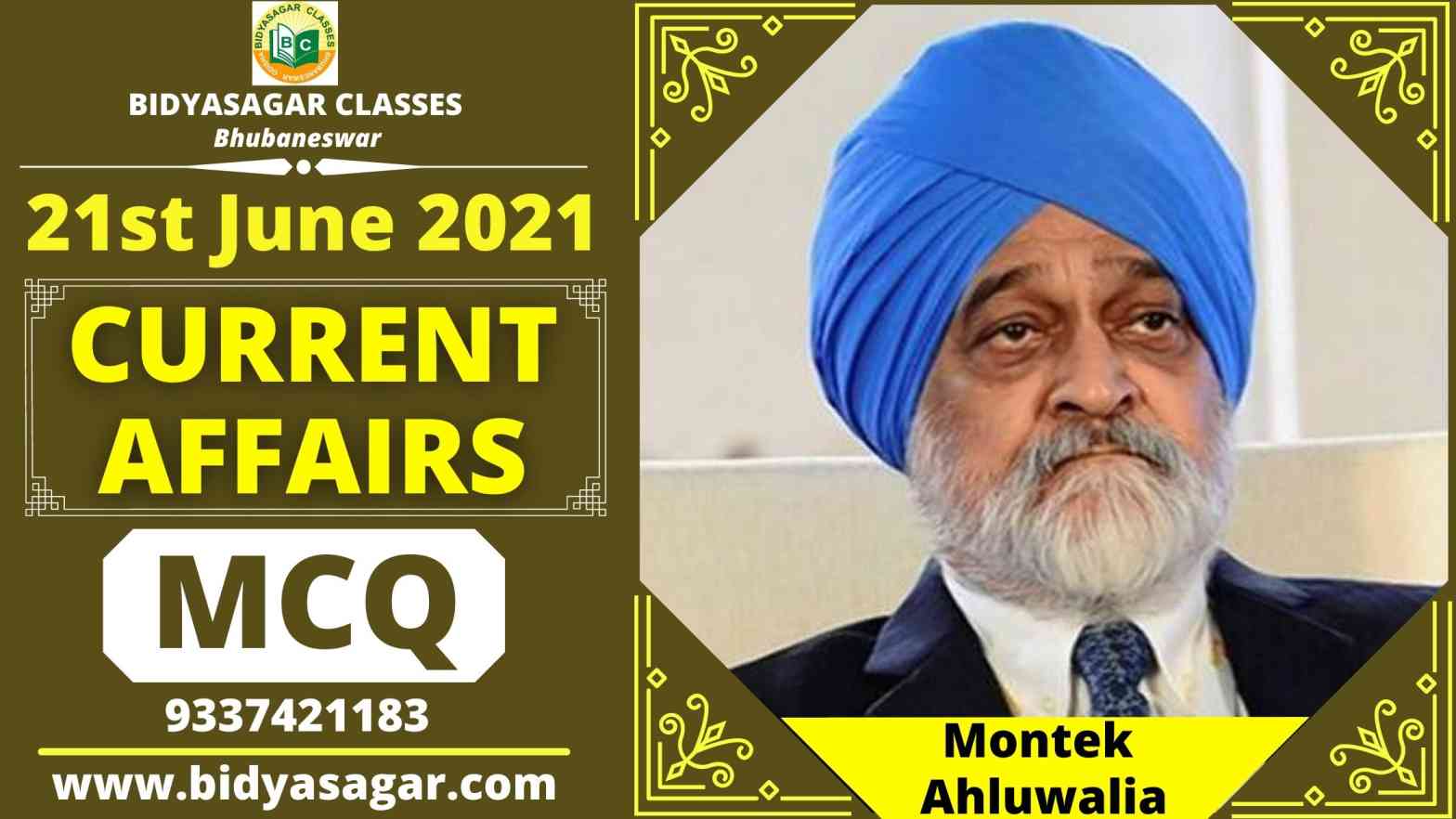 In this article, we will discuss MCQ on important current affairs of 21st June 2021 and their answers with explanations.

1. Who has won the 2021 Presidential Elections in Iran?
A. Ebrahim Raisi
B. Hassan Rouhani
C. Lungi Ngidi
D. Omar Abdullah
2. World Refugee Day is observed on ___ June every year.
A. 19th
B. 20th
C. 21st
D. 22nd
3. Which is the number one test cricket team as per the recent ICC Test Rankings 2021?
A. Australia
B. India
C. New Zealand
D. England
4. World’s 3rd largest diamond has been found in _________.
A. Argentina
B. Lufthansa
C. Lithuania
D. Botswana
5. The EUNAVFOR naval exercise was held in _____________.
A. Bay of Bengal
B. Gulf of Aden
C. Pacific Ocean
D. Indian Ocean
6. Which country will issue vaccine passports?
A. India
B. Brazil
C. China
D. Japan
7. India has signed an MoU with Bhutan for strengthening cooperation in the field of ____________.
A. tourism
B. spirituality
C. environment
D. technology
8. Government of India has set a target to reduce road accidents by ____ % by the year 2024.
A. 25 %
B. 50 %
C. 75 %
D. 80 %
9. Which state government will set up Vedic Education and Sanskar Board?
A. Haryana
B. Meghalaya
C. Tamil Nadu
D. Rajasthan
10. Who has been roped in as the brand ambassador of OnePlus for its wearables?
A. Virat Kohli
B. MS Dhoni
C. Jaspreet Bumrah
D. Sanju Samson
11. Which of the following international organization has recently organized a four-day summit for Vaccine Internationalism?
A. World Health Organization
B. Progressive International
C. World Bank
D. NITI Aayog
12. Which of these ministries has recently released 3 draft strategies to boost the tourism sector after the COVID-19 pandemic?
A. Ministry of Sports
B. Ministry of Education
C. Ministry of Tourism
D. Ministry of Science
13. The central government has recently set a target to reduce road accident deaths by 50% by which year?
A. 2021
B. 2022
C. 2023
D. 2024
14. Which day is celebrated around the world on 21st June?
A. World Music Day
B. International Yoga Day
C. Both A & B
D. None of these
15. National Internet Exchange of India has recently celebrated which of its foundation day?
A. 10th
B. 12th
C. 18th
D. 24th
16. Kannada cinema’s famous actor Sanchari Vijay has passed away recently in a road accident at the age of?
A. 28 Years
B. 38 Years
C. 48 Years
D. 58 Years
17. Indian female wrestler Vinesh Phogat has recently won gold medal in Poland Open in how many Kg Category?
A. 43 Kg Category
B. 53 Kg Category
C. 63 Kg Category
D. 73 Kg Category

1. A
Ebrahim Raisi has won the 2021 Presidential elections of Iran. He won the elections by securing 62 % of the total votes. He is currently serving as the Chief Justice of Iran. He will succeed incumbent Hassan Rouhani from August 2021.
2. B
World Refugee Day is observed on 20th June every year. It is globally observed to make people aware of the hardships of the refugees across the world. The theme of 2021 World Refugee Day was ‘Together we heal, learn and shine’.
3. C
New Zealand is currently the number one test cricket team. New Zealand currently has 123 points followed by India with 121 points.
4. D
The world’s 3rd largest diamond has been found in Botswana of South Africa. Botswana is the world’s largest producer of diamonds.
5. B
The EUNAVFOR naval exercise was held in the Gulf of Aden. EUNAVFOR stands for European Union Naval Force Somalia. The two-day naval exercise was held on 18th and 19th June 2021 for a counter-piracy mission off the coast of Somalia.
6. D
Japan will issue vaccine passports from July 2021. The vaccine will include details like the holder’s date of inoculation and vaccine manufacturer.
7. C
India has signed an MoU with Bhutan for strengthening cooperation in the field of the environment. Under the MoU, an exchange of best practices in areas like climate change and air pollution will be carried out.
8. B
The government of India has set a target to reduce road accidents by 50 % by the end of 2024. The objective was officially announced by the Union Minister of Road Transport and Highways, Shree Nitin Gadkari.
9. D
The government of Rajasthan will set up Vedic Education and the Sanskar Board for the revival of knowledge on Vedas and Sanskrit scriptures. The board will be constituted with the next 4 to 5 months.
10. C
Indian fast bowler, Jaspreet Bumrah has been roped in as the brand ambassador of the wearable lineup of OnePlus. He will be promoting the OnePlus Watch and the OnePlus Band.
11. B
The Progressive International has recently organized a four-day summit for vaccine internationalism. This summit has been started with the objective of “ending the COVID-19 pandemic as quickly as possible and making the COVID-19 vaccines safe for all”.
12. C
The Ministry of Tourism has recently released 3 draft strategies with a roadmap to promote India as a rural and medical tourism destination in the aftermath of the COVID-19 pandemic. This draft will also help in reducing migration from rural areas, eradicating poverty, and sustainable development.
13. D
The central government has recently set a target to reduce road accident deaths by 50% in the year 2024. Recently, Road Transport and Highways Minister Nitin Gadkari had said that the need to identify “black spots” in each state, district, and the city will be emphasized.
14. C
World Music Day and International Yoga Day are celebrated all over the world on 21st June. This year 7th International Yoga Day is being celebrated. The theme of this year’s Yoga Day is “Yoga for Wellness”. Which will be dedicated to physical and mental well-being.
15. C
National Internet Exchange of India has recently celebrated its 18th Foundation Day. A webinar on “Digital Economy – Growing Scope” was organized on this occasion. NIXI is the first internet exchange in the country that provides interconnection of ISPs by routing domestic internet traffic within the country rather than in the US or abroad.
16. B
Kannada cinema’s famous actor Sanchari Vijay has recently died in a road accident at the age of 38. He was known for his special and different acting in films. Sanchari Vijay made his debut in the year 2011 with the film Rangappa Hogbitna.
17. B
Indian female wrestler Vinesh Phogat has recently won the gold medal in the 53 Kg Category at the Poland Open. This is his third title of the season, having won the Matteo Pelicone in March and the gold medal at the Asian Championship in April.