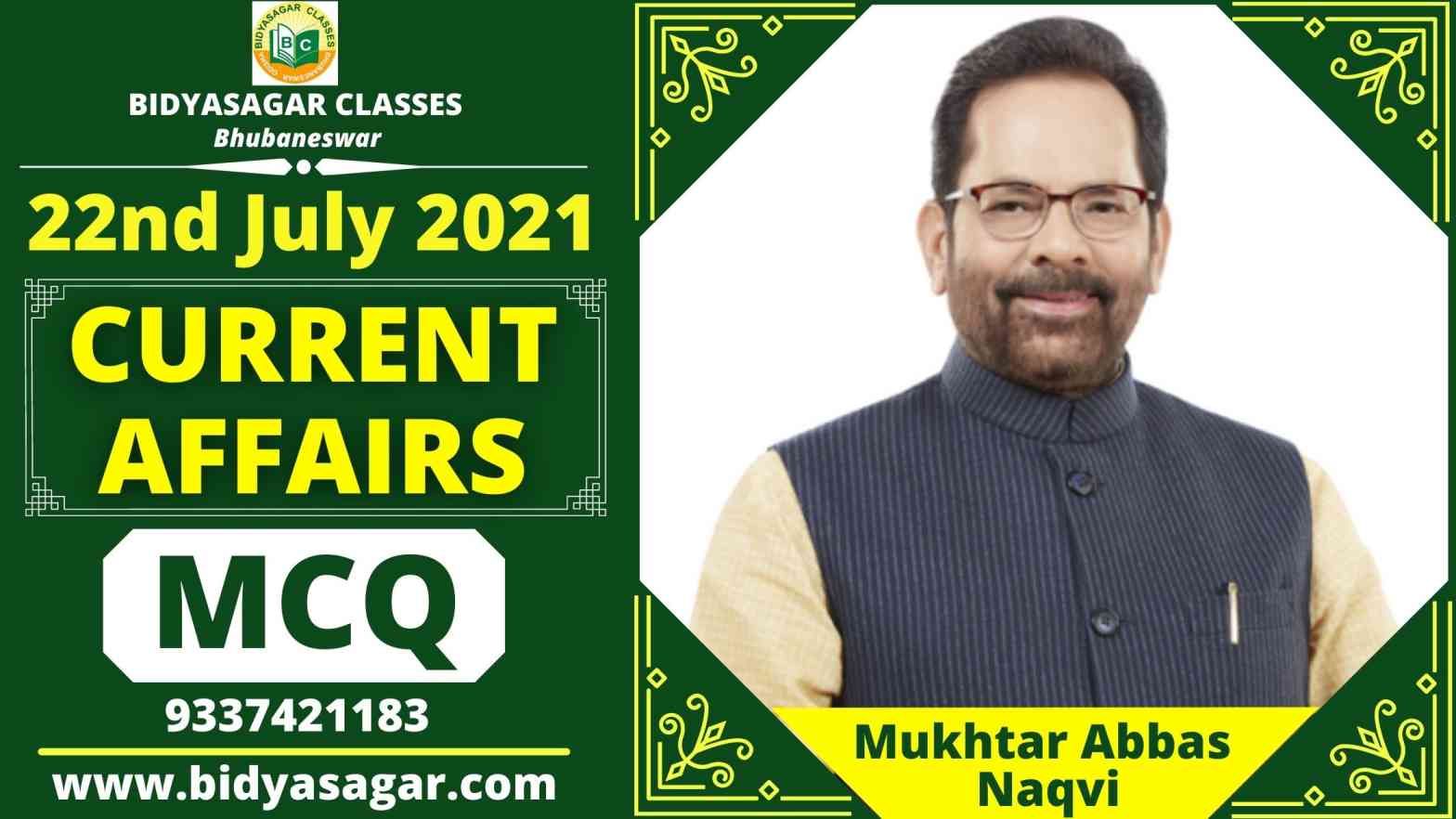 In this article, we will discuss MCQ on important current affairs of 22nd July 2021 and their answers with explanations.

1. Name the air defence missile systems, which was recently test-fired by Russia.
(A) S-300
(B) S-400
(C) S-500
(D) S-600
2. The Government of India has extended the duration of the ‘Stand Up India Scheme’ up to the year _______.
(A) 2025
(B) 2022
(C) 2028
(D) 2030
3. Indian Oil Corporation, India’s largest oil firm, to set up first ‘green hydrogen’ plant at?
(A) Kolkata
(B) Dehradun
(C) Kanpu
(D) Mathura
4. Name the IIT Ropar develops first-of-its-kind Oxygen Rationing Device.
(A) YUVA
(B) FEDDY
(C) ROGER
(D) AMLEX
5. Who has been appointed as the Deputy Leader of Rajya Sabha?
(A) Thambi Durai
(B) Mukhtar Abbas Naqvi
(C) Keshav Prasad Maurya
(D) Ram Govind Chaudhary
6. Banking and financial services major Goldman Sachs has opened a global centre in ______________.
(A) Kochi
(B) Chennai
(C) Hyderabad
(D) Bengaluru
7. Fifteen 12.7 mm M2 NATO Stabilized Remote Control Gun is manufactured with transfer of technology agreement from Elbit Systems. Which of the following nation is associated with Elbit Systems?
(A) UK
(B) USA
(C) UAE
(D) Israel
8. Which of the state government to provide jobs for all national games medalists, guarantees sports pension?
(A) Gujarat
(B) Bihar
(C) Punjab
(D) Assam
9. Asian Development Bank projected India’s economic growth forecast at ______ iA FY22.
(A) 10%
(B) 09%
(C) 11%
(D) 12%
10. In which of the following city government has decided to set up the Indian Institute of Heritage?
(A) Srinagar
(B) Leh
(C) Noida
(D) Chennai
11. Name the billionaire, who has made a short journey to space, in the first crewed flight of his rocket ship, New Shepard.
(A) Larry Ellison
(B) Bill Gates
(C) Elon Musk
(D) Jeff Bezos
12. Which of the following country has unveiled a maglev train capable of a top speed of 600 kph?
(A) China
(B) Germany
(C) Japan
(D) USA
13. Which of the following insurance company has introduced Arogya Rakshak, a non-linked, non-participating, regular premium, individual, health insurance plan?
(A) Aegon Life Insurance Corporation
(B) Life Insurance Corporation of India
(C) Bajaj Allianz Life Insurance
(D) Bharti AXA Life Insurance
14. Name the village, which has been bestowed with the title Kerala’s first ‘Book Village’.
(A) Kombanad
(B) Marampilly
(C) Perumbavoor
(D) Perumkulam
15. NMCG has approved new projects for the rejuvenation of six rivers in Uttarakhand. NMCG stands for_______________.
(A) National Mission for Clean Ganga
(B) National Mission for Clean Ghandak
(C) National Mission for Cover Ganga
(D) National Mission for Clean Grama Panchayath
16. According to Oxfam’s “The Hunger Virus Multiplex” report, how many people die of starvation every minute in the world?
A. 5 people
B. 7 people
C. 9 people
D. 11 people
17. India’s largest oil company IOC has announced to build the country’s first green hydrogen plant in which city of India?
A. Pune
B. Delhi
C. Hyderabad
D. Mathura
18. Which day is celebrated across India on 22nd July?
A. National Flag Day
B. National Knowledge Day
C. National Women’s Safety Day
D. National Flag Adoption Day
19. China has recently started high-speed maglev train with a speed of how many kmph in Qingdao?
A. 300 km/h
B. 400 km/h
C. 500 km/h
D. 600 km/h
20. Which of the following country has successfully test-fired the world’s most advanced anti-missile system S-500?
A. Japan
B. America
C. China
D. Russia

1. C
Russia has successfully test-fired its new S-500 air defence missile systems, from a southern training range, Kapustin Yar, on July 20, 2021.
2. A
The Government of India has extended the duration of the ‘Stand Up India Scheme’ up to the year 2025. The scheme was launched by the Prime Minister on 05 April 2016 to facilitate loans to Scheduled Caste, Scheduled Tribe and women borrowers, to promote entrepreneurship among them.
3. D
Indian Oil Corporation (IOC), India’s largest oil firm, will build the first ‘green hydrogen’ plant of the country at its Mathura refinery, to meet the growing demand for both oil and cleaner forms of energy.
4. D
The Indian Institute of Technology (IIT), Ropar has developed a first-of-its-kind Oxygen Rationing Device called AMLEX, to save the oxygen which otherwise gets wasted unnecessarily, and in turn, increase the life of medical oxygen cylinders three folds.
5. B
Union minister Mukhtar Abbas Naqvi has been appointed as the deputy Leader of the House in Rajya Sabha. Mukhtar Abbas Naqvi is one of the few leaders in BJP who is believed to have a good working relationship with other political parties.
6. C
Banking and financial services major Goldman Sachs has opened a new facility in Hyderabad as part of its commitment to expand its global centre for engineering and business innovation in India. The new office is expected to have about 800 people by year-end and grow to over 2,500 people by 2023.
7. D
Ordnance Factory Tiruchirappalli hands over Fifteen 12.7 mm M2 NATO Stabilized Remote Control Gun to Indian Navy & 10 to Indian Coast Guard. It is manufactured with transfer of technology agreement from Elbit Systems, Israel.
8. D
Chief Minister Himanta Biswa Sarma said that along with Olympics, Asian and Commonwealth games medalists, the medal winners in National Games would also get government job.
9. A
The Asian Development Bank (ADB) has downgraded India’s economic growth forecast for the financial year 2021-22 (FY22) to 10 per cent, in its Asian Development Outlook (ADO) Supplement for July.
10. C
The government has decided to set up the Indian Institute of Heritage at Noida, Gautam Buddha Nagar.
11. D
Billionaire Jeff Bezos has made a short journey to space, in the first crewed flight of his rocket ship, New Shepard. He was accompanied by Mark Bezos, his brother, Wally Funk, an 82-year-old pioneer of the space race, and an 18-year-old student.
12. A
China unveiled a maglev train capable of a top speed of 600 kph. The maximum speed would make the train, self-developed by China and manufactured in the coastal city of Qingdao, the fastest ground vehicle globally.
13. B
The Life Insurance Corporation of India (LIC) has introduced Arogya Rakshak, a non-linked, non-participating, regular premium, individual, health insurance plan.
14. D
Perumkulam, in Kollam District, has been bestowed with the title Kerala’s first ‘Book Village’. This claim to fame results from years of concerted efforts aimed at encouraging the habit of reading.
15. A
The National Mission for Clean Ganga (in its 36th Executive Committee) approved new projects for rejuvenation of six rivers in Uttarakhand.
16. D
According to Oxfam’s “The Hunger Virus Multiplex” report, every minute in the world, 11 people die due to starvation. Whereas last year during the Corona period, the number of people facing famine-like situation 7 in the whole world has increased 6 times. According to the report, due to Kovid-19, about 7 people die every minute in the world.
17. D
India’s largest oil company Indian Oil Corporation has announced to soon build the country’s first green hydrogen plant at its refinery in Mathura city. Whereas in the past “grey hydrogen” production projects using fossil fuels such as natural gas have been announced.
18. D
National Flag Adoption Day is celebrated all over India on 22nd July. After the adoption of the tricolor on this day, for the first time, Pandit Jawaharlal Nehru hoisted this tricolor on 15 August 1947. Whereas in the year 1947, on 22 July, the assembly headed by Dr. Rajendra Prasad adopted the national flag.
19. D
China has recently introduced high-speed maglev train with a speed of 600 km/h in Qingdao. Now from the start of this train, the journey from Shenzhen to Shanghai, which used to take 10 hours, will now take only 5 hours. It took 19 months to develop the magnetic poles for the whirlpool brakes on this train. There is only 5G Wi-Fi system and wireless charging facility inside this train to ensure smooth telecommunication.
20. D
Russia has successfully test-fired the world’s most advanced anti-missile system, the S-500 air defense missile system. Expected to have a range of 600 km, this missile system is also capable of countering attacks from space. This S-500 air defense missile system is also called Triumpheter-M and Prometheus.