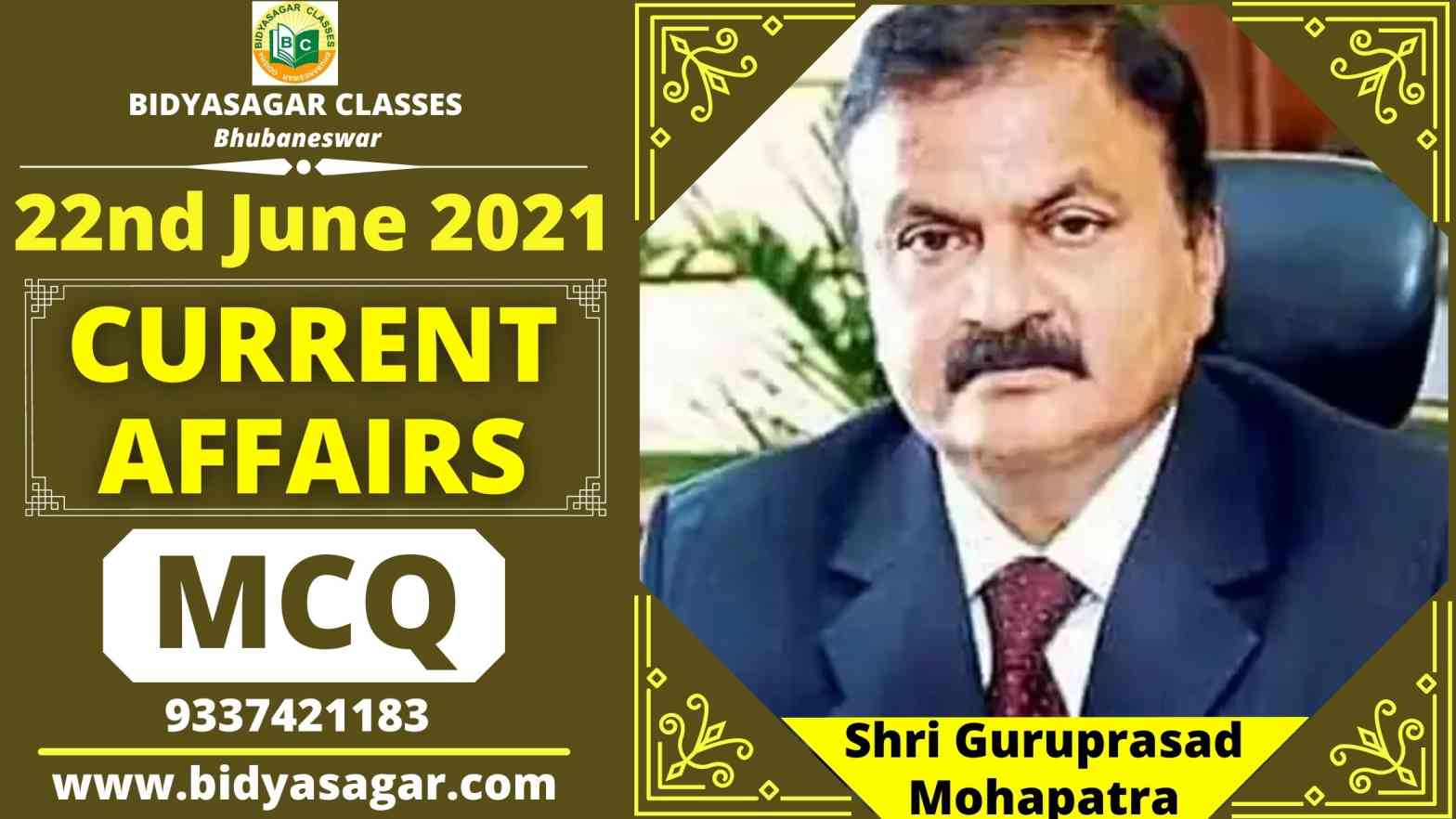 In this article, we will discuss MCQ on important current affairs of 22nd June 2021 and their answers with explanations.

3. Ebrahim Raisi has won the 2021 Iranian presidential election of which country recently?

4. Name the author of the book ‘Beyond Here and Other Poems’.

5. ‘The Nutmeg’s Curse: Parables for a Planet in Crisis’ is the latest book by which of the following renowned authors?

6. What is India’s Rank in Sustainable Development Report 2021?

A) Yoga for Health – Yoga at Home

B) Yoga for well-being

8. What is the rank of India in terms of Money Deposited in Swiss Banks?

11. Which of the following city has been named as the most liveable city of India, in the Ease of Living Index 2020?

A) We stand together with refugees

B) Step With Refugees — Take A Step on World Refugee Day

D) Together we heal, learn and shine

13. Guruprasad Mohapatra, who has passed away recently was serving as a top bureaucrat in which department of Central Government?

A) Department of Expenditure

B) Department of Industry and Internal Trade

14. Who was named a member of a high-level Advisory Group formed by the World Bank and IMF?

15. As per the data of the Swiss National Bank (SNB), which country has topped in the terms of funds held by individuals and firms in Swiss banks in 2020?

16. As per the World Investment Report 2021, which country was the largest recipient of FDI inflows in 2020?

17. As per the data by the Swiss National Bank (SNB), India has been ranked at ——– place in terms of money parked by its citizens and enterprises with Swiss bank in 2020?

18. As per the World Investment Report 2021 by the UN Conference on Trade and Development (UNCTAD), India was at ——— place in the terms of the recipient of Foreign Direct Investment (FDI) inflows in the year 2020

19. How many Years old Mavya Sudan has recently become the first woman fighter pilot of Jammu and Kashmir’s Air Force?

United Nations celebrates International Day of Yoga globally on 21 June every year to raise awareness worldwide of the many benefits of practising yoga.

A 1,098-carat diamond has been discovered in Botswana, by Debswana Diamond Company, a joint venture between the government of Botswana and the South African diamond company De Beers.

Ebrahim Raisi has won the 2021 Iranian presidential election, winning 62 percent of the vote with about 90 percent of ballots counted.

Chief Minister Naveen Patnaik released a book of poems ‘Beyond Here and Other Poems’ written by senior bureaucrat Bishnupada Sethi.

Jnanpith Awardee and renowned author Amitav Ghosh’s authored a book titled, ‘The Nutmeg’s Curse: Parables for a Planet in Crisis’. It is published by John Murray.

Recognizing this important role of Yoga, this year’s commemoration of the International Day of Yoga focuses on “Yoga for well-being” – how the practice of Yoga can promote the holistic health of every individual.

World Music Day is observed globally on 21st June every year. This day is celebrated to honour amateur and professional musicians.

Max Verstappen (Netherlands-Red Bull) has won the 2021 French Grand Prix. This race is the seventh round of the 2021 FIA Formula One World Championship.

Bengaluru has been named as the most liveable city of India, in the Ease of Living Index 2020, released by the Centre for Science and Environment (CSE).

This year the theme for World Refugee Day is ‘Together we heal, learn and shine’. The United Nations has stated that the coronavirus disease (Covid-19) pandemic has made it evident that we can only succeed by standing together.

Shri Guruprasad Mohapatra, the Secretary in the Department of Industry and Internal Trade (DPIIT), has passed away due to COVID-19 related complications.

Former Deputy Chairman of the Planning Commission, Montek Singh Ahluwalia was named a member of a high-level Advisory Group formed by the World Bank and IMF.

As per the Data, United Kingdom has topped with CHF 377 billion and followed by United States, West Indies, France, and Hong Kong have been ranked 2nd, 3rd, 4th, and 5th place respectively.

In the terms of money parked by its citizens and enterprises with a Swiss bank in 2020, India has been placed at 51st compared to the last year, India was at 77th position.

the UN Conference on Trade and Development (UNCTAD) has released World Investment Report 2021. as per the report, India was the 5th largest recipient of Foreign Direct Investment (FDI) inflows in the world in 2020.

23 year old Mavya Sudan has recently become the first woman fighter pilot in the Air Force of Jammu and Kashmir. He has been made a flying officer. She is the 12th female fighter pilot of the country to do so, hailing from Rajouri.

Answer: United Nations – According to the UN’s Refugee Agency Commissioner Filippo Grandi, every 96th person in the world is homeless. The report says that the reason for human homelessness is war, repression and depleting resources in many countries. Whereas in Syria 11 million people have become homeless. Which is 45% of the country’s population.