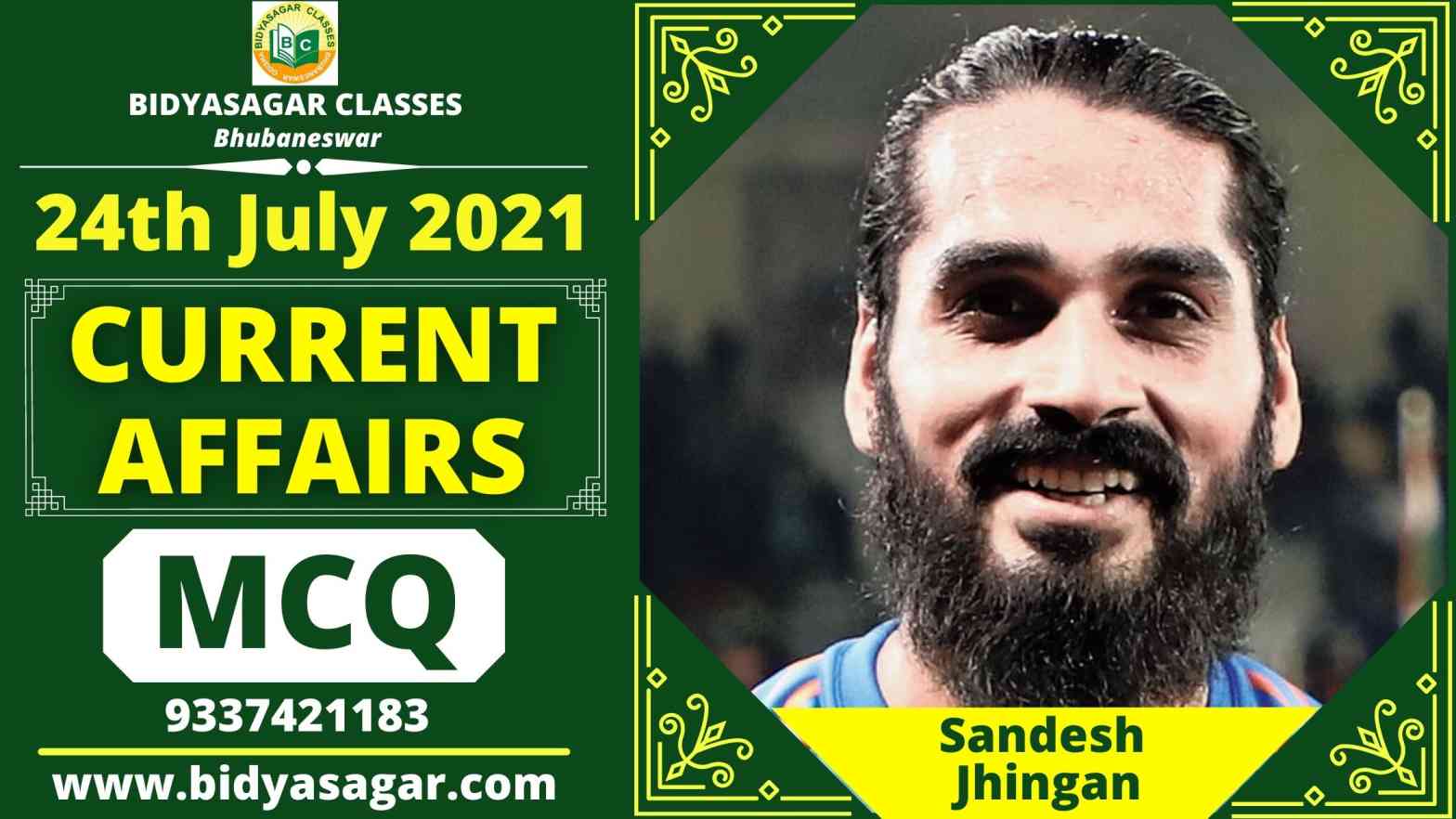 In this article, we will discuss MCQ on important current affairs of 24th July 2021 and their answers with explanations.

1. ‘The Stranger in The Mirror’ is the autobiography of _______________.
(A) Shekhar Kapur
(B) Kabir Bedi
(C) Naseeruddin Shah
(D) Rakeysh Omprakash Mehra
2. U GRO Capital announced the launch of a co-lending partnership for micro, small and medium enterprises with which of the following bank?
(A) SBI
(B) IDBI
(C) BOB
(D) HDFC
3. Recently, Vice President released a book ‘Palleku Pattabhishekam’ . Which one of the following sectors is associated with this book?
(A) Energy Sector
(B) Rural India and Agriculture
(C) Mining
(D) Export Development
4. Para shooter Rubina Francis created a world record at the ongoing Para Sport Cup in Peru. She belongs to________________.
(A) Punjab
(B) Bihar
(C) Kerala
(D) Madhya Pradesh
5. Gira Sarabhai passed away recently. She was the co-founder of _______.
(A) National Institute of Design
(B) National Human Genome Research Institute
(C) National Eye Institute
(D) National Institute of Technology
6. Who is the author of the book ‘Bank with a Soul: Equitas’?
(A) Duvvuri Subbarao
(B) C K Garyali
(C) Yalamanchili Sivaji
(D) NV Ramana
7. Which one of the following can identify by the ‘Surabhi e-Tag’?
(A) Fastag issue
(B) Electricity bill
(C) E- documentation of land
(D) Cattle based on muzzle
8. Who among the following has been named the AIFF men’s Footballer of the Year 2020-21 season?
(A) Sunil Chhetri
(B) Sahal Abdul Samad
(C) Gurpreet Singh Sandhu
(D) Sandesh Jhingan
9. UNESCO removes _______ from the world heritage list.
(A) Great Barrier Reef
(B) Liverpool
(C) Mesa Verde National Park
(D) Ha Long Bay
10. Who was picked as the AIFF men’s Emerging Player for the year award for 2020-21?
(A) Suresh Singh Wangjam
(B) Rahul Bheke
(C) Anirudh Thapa
(D) Glan Martins
11. What is the theme of World Brain Day 2021?
(A) Stroke is a brain attack – prevent it and treat it
(B) Clean Air for Brain Health
(C) Migraine: The Painful Truth
(D) Stop Multiple Sclerosis
12. What is the theme of the G20 Environment Ministers’ Meeting 2021?
(A) Climate Change, Oceans and Clean Energy
(B) Realizing Opportunities of the 21st Century For All
(C) People, Planet, Prosperity
(D) Empowering People
13. ‘Kalaimaamani’ Sikkil Shri R Bhaskaran passed away recently. He was famously known for____________________.
(A) Violinist
(B) Guitarist
(C) Sitarist
(D) Shehnai
14. In which of the following city the world’s first 3D printed steel bridge has been opened?
A. Washington DC
B. Amsterdam
C. Pune
D. Tokyo
15. A group of scientists has discovered an ancient virus in Tibetan glaciers dating back nearly 15,000 Years?
A. 15,000 Years
B. 25,000 Years
C. 35,000 Years
D. 45,000 Years
16. NTPC of Odisha has recently completed the testing of second unit of how many MW capacity at Darlipali?
A. 400 Megawatt
B. 800 Megawatt
C. 1200 Megawatt
D. 1600 Megawatt
17. The government of Taiwan has announced the establishment of which office in Lithuania named “Taiwan”?
A. First
B. Third
C. Fourth
D. Fifth
18. Orchha in the state of Madhya Pradesh and which city has been selected by UNESCO under its “Historic Urban Landscape Project”?
A. Indore
B. Bhopal
C. Jabalpur
D. Gwalior
19. The Joint Secretary of which ministry in India Rashmi Ranjan Das has been appointed to the United Nations Tax Committee?
A. Ministry of Education
B. Ministry of Sports
C. Ministry of Finance
D. Ministry of Information and Broadcasting
20. The Union Cabinet has recently approved the formation of a Central University in which Union Territory?
A. Mumbai
B. Kolkata
C. Ladakh
D. Dadar Nagar Haveli

1. D
Filmmaker Rakeysh Omprakash Mehra on 21th July said he is coming up with his autobiography, The Stranger In The Mirror. Published by Rupa Publications, the book will hit the stands across the country on July 27.
2. C
U GRO Capital announced the launch of a co-lending partnership for micro, small and medium enterprises with Bank of Baroda.
3. B
Vice President Releases Book ‘Palleku Pattabhishekam’ On Rural India And Agriculture. Releasing the book ‘Palleku Pattabhishekam’ by former MP Shri Yalamanchili Sivaji at Dr Marri Channa Reddy Human Resource Development Institute in Hyderabad, the Vice President said that villages and agriculture are intrinsically connected and we must address their issues holistically to bring ‘Gram Swarajya’ to our villages.
4. D
Madhya Pradesh shooter, Rubina Francis has set a world record at the ongoing Para Sport Cup in Peru.
5. A
Gira Sarabhai Co-founder Of National Institute of Design Passes Away At 98. The pioneer of design education in the nation has played a vital part in establishing several other institutions and also made remarkable contributions in the field of art and architecture.
6. B
Duvvuri Subbarao, Former Governor, RBI released Dr. C K Garyali’s book, ‘Bank with a Soul: Equitas’. Dr. C K Garyali is a founder trustee of EDIT (Equitas Development Initiative Trust) and the book chronicles the journey of Equitas and EDIT in transforming the lives of women with frequent social reform initiatives helping them setup micro-enterprises.
7. D
Dvara E-Dairy Solutions, a portfolio company of Dvara Holdings has launched an artificial intelligence (AI) led digital tag ‘Surabhi e-Tag’ to identify cattle based on muzzle identity (muzzle images of the cattle are collected through the Surabhi mobile application).
8. D
Senior India defender, Sandesh Jhingan was named the AIFF men’s Footballer of the Year 2020-21 season.
9. B
The UN’s cultural agency UNESCO has voted narrowly to remove Liverpool’s waterfront from its list of world heritage sites, citing concerns about overdevelopment, including plans for a new football stadium.
10. A
While midfielder Suresh Singh Wangjam was picked as the Emerging Player for the year award for 2020-21.
11. D
The theme for this World Brain Day is “Stop Multiple Sclerosis”. World Brain Day advocates early diagnosis of this condition that can help improve the quality of life of the patient.
12. C
The 16th G20 Summit under Italian Presidency is slated to revolve around its primary theme of “People, Planet and Prosperity”.
13. A
Noted Carnatic Classical Violinist ‘Kalaimaamani’ Sikkil Shri R Bhaskaran passed away. He started learning the Violin at the age of 11 from Thiruvarur Shri Subba Iyer and later trained under Mayuram Shri Govindarajan Pillai.
14. B
The world’s first 3D printed steel bridge has recently been opened in Amsterdam, Netherlands. The project is opened on the Oudezijds Achterbergwal Canal in the city of Amsterdam. This bridge has been made by Amsterdam based 3D metal printing company MX3D. 4500 kg of stainless steel has been used to make this bridge.
15. A
A group of scientists have recently discovered an ancient virus frozen in Tibetan glaciers for about 15,000 Years. Most of these viruses are different from any viruses that have been listed to date because they have been frozen for thousands of Years.
16. B
Odisha’s National Thermal Power Corporation Limited (NTPC) has recently completed the testing of the second unit of 800 Megawatt capacity at Darlipali. With this, the total installed capacity of NTPC has now reached 66875 Megawatt. At present, NTPC Group has 71 power stations including 29 renewable projects.
17. A
The government of Taiwan has announced to set up its first office named “Taiwan” in Lithuania soon. Taiwan’s government has made this announcement as it seeks to strengthen its diplomatic presence around the world with increasing pressure from Beijing.
18. D
Recently Orchha and Gwalior city in the state of Madhya Pradesh has been selected by UNESCO under its “Historic Urban Landscape Project”. This project was started in the year 2011. While 6 cities of South Asia including Varanasi and Ajmer are already involved in this project.
19. C
Rashmi Ranjan Das, Joint Secretary, Ministry of Finance has been appointed to the United Nations Tax Committee. She will serve in this post from 2021 to 2025. This committee also focuses on developing countries and their various policy environments. Most of the newly appointed members of this committee are from developing countries.
20. C
The Union Cabinet has recently approved the formation of a Central University in the Union Territory of Ladakh under a project costing Rs 750 crore. The first phase of this university will be completed in the coming 4 Years. A bill will be introduced to amend the Central Universities Act, 2009 for the formation of this Central University.