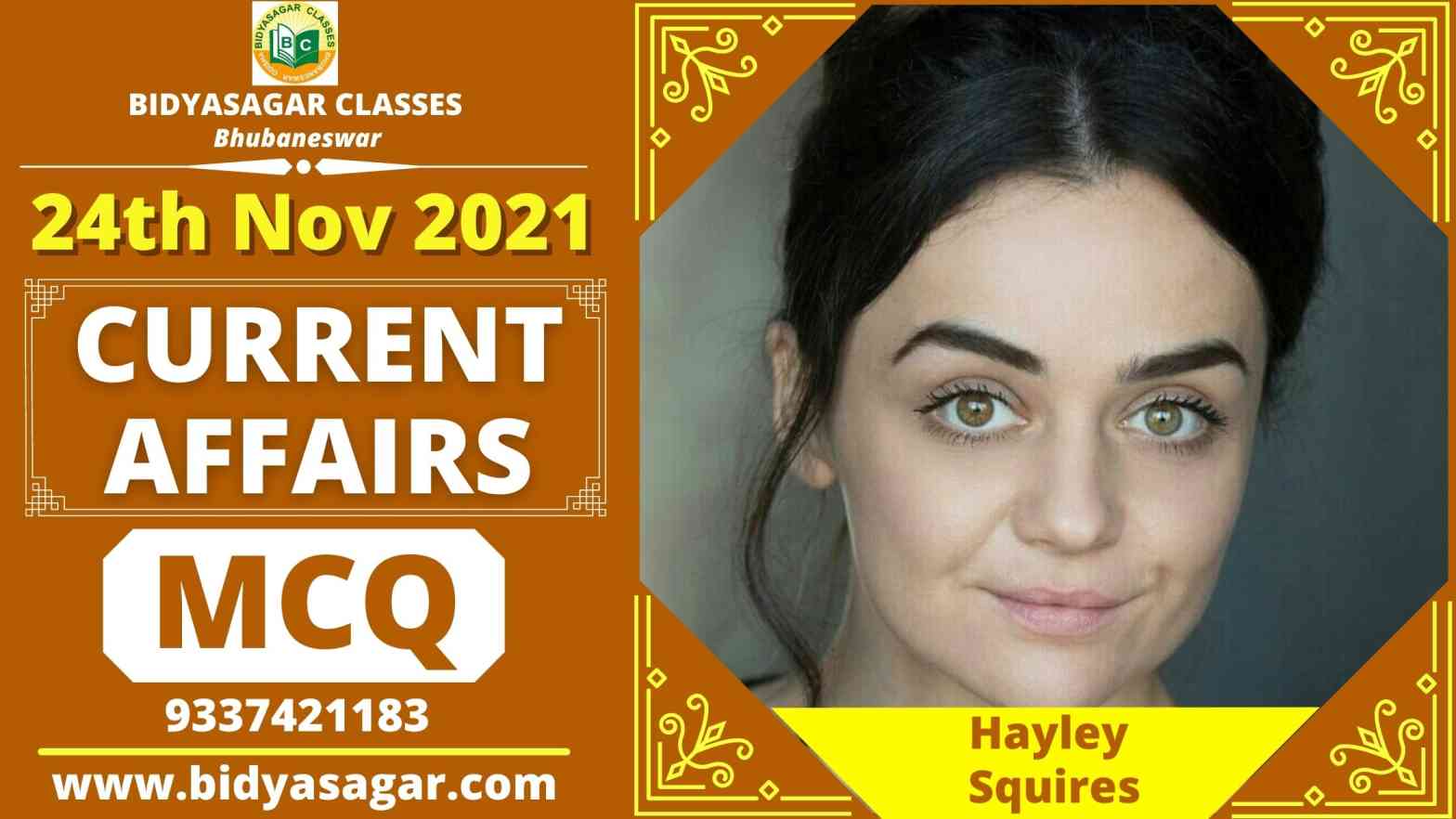 In this article, we will discuss MCQ on important current affairs of 24th November 2021 and their answers with explanations.

1. The foundation stone for the Rani Gaidinliu Tribal Freedom Fighters Museum has been laid down in which state recently?
A) Manipur
B) Gujarat
C) Telangana
D) Nagaland
2. As per the recent report of Goldman Sachs , what is the projected GDP growth rate of Indian economy in the financial year 2021-22?
A) 8.8%
B) 9.1%
C) 10.5%
D) 7.2%
3. The traditional festival Boita Bandana is observed by which state annually?
A) West Bengal
B) Telangana
C) Odisha
D) Bihar
4. Who has been conferred with the 2021 International Emmy Awards for Best Actor?
A) David Tennant
B) Matt Smith
C) Peter Capaldi
D) Michael Sheen
5. India has signed loan agreement with which financial institution worth USD 250 million to improve quality of learning in the state of Andhra Pradesh?
A) Asian Development Bank (ADB)
B) World Bank
C) United Nations Development Programme (UNDP)
D) Asian Infrastructure Investment Bank (AIIB)
6. In India, November 24 is celebrated as Martyrdom Day of Guru Tegh Bahadur. He was the _________ Guru of Sikhs
A) 2nd
B) 4th
C) 7th
D) 9th
7. Which bank has launched the online platform called ‘Trade Emerge’ to offer digital banking and value-added services to Indian exporters and importers?
A) ICICI Bank
B) State Bank of India
C) Punjab National Bank
D) HDFC Bank
8. Name the recipient of the 2021 Indira Gandhi Prize for Peace, Disarmament and Development
A) Goonj
B) SEEDS
C) Pratham
D) HelpAge
9. Who is the author of the book-India Vs UK: The Story of an Unprecedented Diplomatic Win?
A) T. S. Tirumurti
B) Syed Akbaruddin
C) Harsh Vardhan Shringla
D) Vijay Keshav Gokhale
10. In November 2021, Indian and Indonesian Navy undertook which edition of the Coordinated Patrol (CORPAT) in the Indian Ocean region?
A) 39
B) 34
C) 35
D) 37
11. What is the revised estimated GDP growth rate of India in the Calendar Year 2021 according to Goldman Sachs?
A) 8%
B) 9%
C) 7%
D) 10%
12. Lachit Day is celebrated by which Indian state annually?
A) Tamil Nadu
B) Goa
C) Assam
D) Haryana
13. The social service organization “Pratham” has been awarded with which award for its work in the field of ensuring quality education?
A) Jawaharlal Nehru Peace Prize 2021
B) Mahatma Gandhi Peace Prize 2021
C) Indira Gandhi Peace Prize 2021
D) Science Collaboration Awards 2021
14. In which of the following state “Patalpani Railway Station” has been announced to be renamed as “Tantya Mama” railway station?
A) Uttar Pradesh
B) Madhya Pradesh
C) Uttarakhand
D) Gujarat
15. Name the Indian Railway Minister, who has recently announced to start the third section of trains for tourism “Bharat Gaurav” train?
A) Piyush Goyal
B) Ashwini Vaishnav
C) Rajnath Singh
D) Hardeep Singh Puri
16. In which Indian state a group of scientists has identified a new plant species from the forest area of Idamalakkudi colony?
A) Gujarat
B) Odisha
C) Kerala
D) Mumbai
17. The Balasore district of which of the following state has been given the country’s “Best Marine District Award”?
A) Gujarat
B) Maharashtra
C) Jharkhand
D) Odisha
18. Which of the following state government has recently set up a “Fintech Governing Council” to become a global fintech hub?
A) Government of Kerala
B) Government of Jharkhand
C) Government of Maharashtra
D) Government of Tamil Nadu

1. A
Union Home Minister Amit Shah laid the foundation for ‘Rani Gaidinliu Tribal Freedom Fighters Museum’ in Manipur
2. B
Wall Street brokerage Goldman Sachs has predicted India’s GDP for FY22 at 9.1% in its recent Macro Outlook 2022 report.
3. C
The traditional Odia festival Boita Bandana was celebrated throughout Odisha on November 19, 2021 with fervor. The festival is commemorated on Kartika Purnima, or the full moon day of the Kartika month as per Hindu Calendar. Boita Bandana literally means sanctifying of boats.
4. A
Best Actor – David Tennant for Des (UK); Best Actress – Hayley Squires for Adult Material (UK)
5. B
The Government of India has signed a legal agreements with the World Bank worth $250 million for a project to improve quality of learning in the state of Andhra Pradesh.
6. D
Every year, November 24 is celebrated as Martyrdom Day of Guru Tegh Bahadur, the ninth Guru of Sikhs, of Sikh religion.
7. A
Private sector lender ICICI Bank has launched an online platform called ‘Trade Emerge’ for Indian exporters and importers to offer them digital banking and value-added services.
8. C
Pratham, Mumbai-based civil society organization, has been conferred with the prestigious Indira Gandhi Prize for Peace, Disarmament and Development for 2021 by the Indira Gandhi Memorial Trust.
9. B
Syed Akbaruddin, the former India’s Permanent Representative to the UN has come out with a book titled ‘India Vs UK: The Story of an Unprecedented Diplomatic Win’
10. D
The 37th edition of India-Indonesia Coordinated Patrol (CORPAT) is being held in the Indian Ocean region on November 23 and 24, 2021.
11. A
Goldman Sachs pegged the economy to grow at 8 percent in Calendar Year 2021 and 9.1 percent in Calendar Year 2022.
12. C
Lachit Divas (Lachit Day) is celebrated annually in the Indian state of Assam on November 24, to mark the birth anniversary of the legendary Ahom army general Lachit Borphukan.
13. B
from “Indira Gandhi Peace, Disarmament and Development Award 2021” for work in the field of ensuring quality education to social service organization “Pratham”. has been awarded. “Pratham” has been selected for the award by a jury headed by former Chief Justice TS Thakur.
14. B
Patalpani railway station in Indore, Madhya Pradesh has been renamed as “Tantya Mama” railway station. The bus stand and Patalpani railway station being built at a cost of 53 crores in Indore will be named after Tantya Mama. This railway station is a small station on the Indore-Akola rail line.
15. B
Indian Railways Minister Ashwini Vaishnav has recently announced to start the third section of trains for tourism “Bharat Gaurav” train after passenger and freight section. These trains will be based on a theme showcasing the culture and heritage of India. Railway Minister Ashwini Vaishnav has announced the tourism segment after the passenger and freight vertical of Indian Railways.
16. C
A new plant species has been identified by a group of scientists from the forest area of Idamalakkudi colony in Idukki in the Indian state of Kerala. Where the Muthuvar tribal community lives. The new species of this plant has been named after the Muthuvar tribal community “Cryptocarya muthuvariana”.
17. D
Balasore district of Odisha state has been given the “Best Marine District Award” of the country. The state of Odisha is the fourth largest fish producing state in the country. During 2020-21, it has produced 8.73 lakh metric tonnes of fish. There is a huge demand for fish in this state.
18. D
The Government of Tamil Nadu has recently set up a “Fintech Governing Council” under the chairmanship of Industry Minister Thangam Thennarasu to become a global fintech hub. While Chief Secretary V. Irai Anbu will act as the Vice-Chairman of the Governing Council.