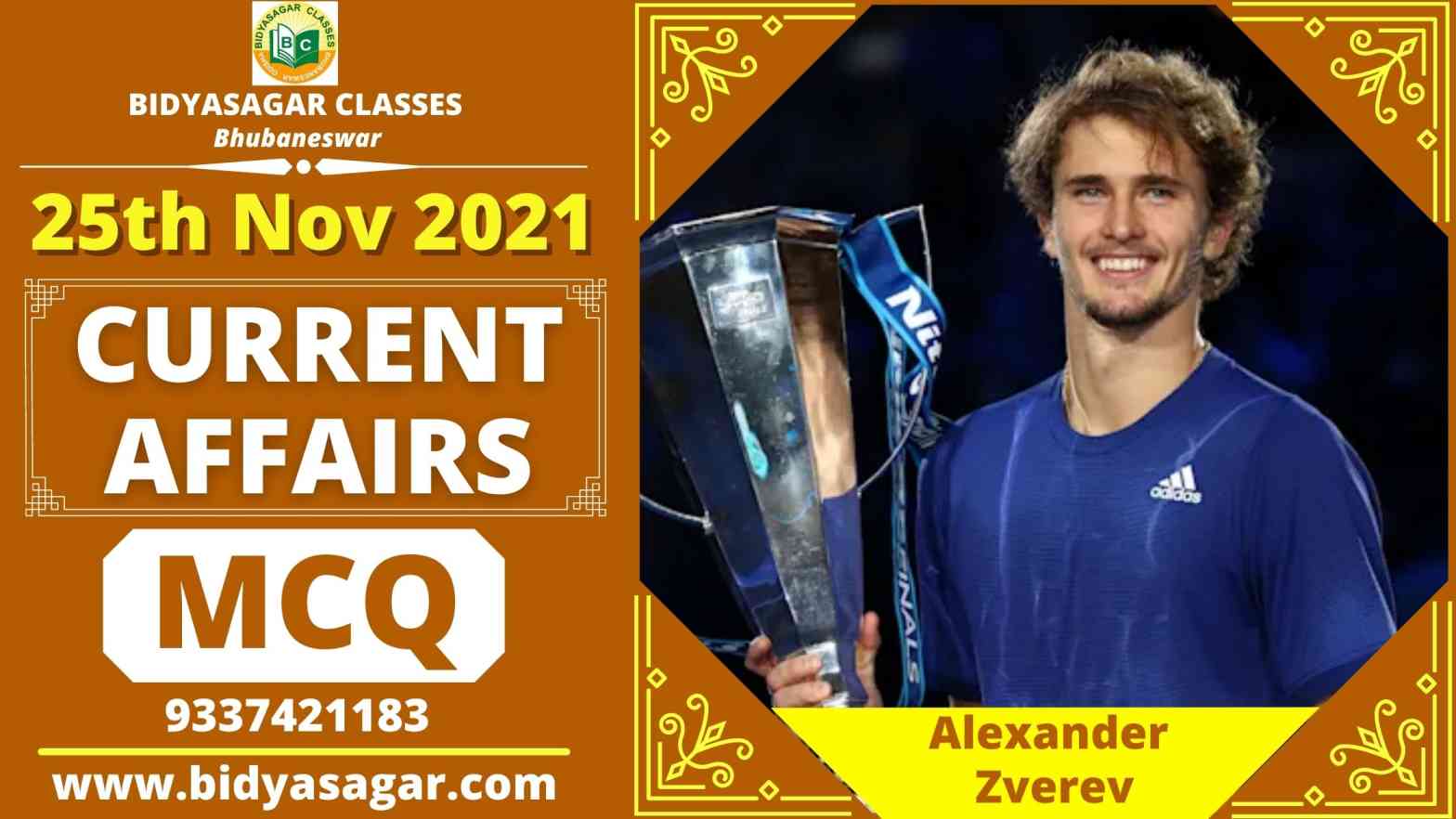 In this article, we will discuss MCQ on important current affairs of 25th November 2021 and their answers with explanations.

1. Which city has achieved top rank in the inaugural SDG Urban Index & Dashboard 2021-22?
A) Shimla
B) Guwahati
C) Chandigarh
D) Kochi
2. Which bank has topped the 2021 list of globally systemic banks (G-SIBs) released by the Financial Stability Board (FSB)?
A) Wells Fargo
B) JP Morgan Chase
C) Morgan Stanley
D) Goldman Sachs
3. The space agency of which country has launched DART mission to intentionally crash a spacecraft into asteroids?
A) Russia
B) Israel
C) China
D) United States
4. Union Minister Pralhad Joshi inaugurated the E-portal of accreditation scheme for Mineral exploration at the 5th National conclave on Mines and Minerals. The Conclave was held in which city?
A) Pune
B) Ranchi
C) New Delhi
D) Indore
5. The autobiography titled “Resolved: Uniting Nations in a Divided World” has been written by which diplomat?
A) Tedros Adhanom
B) Ban Ki-moon
C) António Guterres
D) Moon Jae-in
6. Which tennis player has won the 2021 ATP Finals?
A) Alexander Zverev
B) Novak Djokovic
C) Stefanos Tsitsipas
D) Daniil Medvedev
7. Which financial institutions has approved $300 million loan to strengthen and improve access to comprehensive primary health care in urban areas in India?
A) Asian Infrastructure Investment Bank
B) World Bank
C) Asian Development Bank (ADB)
D) New Development Bank (NDB)
8. When is the International Day for the Elimination of Violence Against Women celebrated?
A) 24 November
B) 25 November
C) 23 November
D) 21 November
9. Magdalena Andersson is the newly elected first prime minister of which country?
A) Turkey
B) Netherlands
C) Sweden
D) Finland
10. Who is the author of the book titled ‘Cooking To Save Your Life’?
A) Abhijit Banerjee
B) Kailash Satyarthi
C) Amartya Sen
D) Venkatraman Ramakrishnan
11. Which team has won the Syed Mushtaq Ali Trophy 2021-22 in cricket?
A) Karnataka
B) Tamil Nadu
C) Madhya Pradesh
D) Gujarat
12. What is the theme of the 2021 International Day for the Elimination of Violence Against Women?
A) Orange the World: End Violence against Women Now!
B) Orange the World: Fund, Respond, Prevent, Collect!
C) Orange the World: Raise Fund to End Violence against Women Now!
D) Orange the World:#HearMeToo
13. Which of the following Department of Economic Research has released the SBI Ecowrap report?
A) Ministry of Finance
B) NITI Aayog
C) State Bank Of India
D) SEBI
14. Name the Union Minister of Science and Technology, who has recently launched India’s first virtual science lab for children?
A) Dr. Harsh Vardhan
B) Dr. Ajay Singh
C) Rajnath Singh
D) Dr. Jitendra Singh
15. Which state’s four-day Sagar Shakti exercise was organized in the Creek sector of the Kutch peninsula?
A) Kerala
B) Punjab
C) Gujarat
D) Maharashtra
16. Which of the following commission has launched “Sustainable Development Goals SDG Urban Index and Dashboard 2021-22”?
A) Planning Commission
B) NITI Aayog
C) Sports Commission
D) Education Commission
17. According to IQAir data, how many Indian cities are among the world’s 100 most polluted cities in the year 2020?
A) 12 cities
B) 25 cities
C) 46 cities
D) 66 cities
18. Which day is celebrated around the world on 25th November?
A) World No Tobacco Day
B) World No Drugs Day
C) World Gutkha Prohibition Day
D) World Prohibition Day

1. A
Shimla has topped among the 56 urban areas while Dhanbad in Jharkhand is at the bottom.
2. B
JP Morgan Chase has topped the 2021 list of globally systemic banks (G-SIBs) released by the Financial Stability Board (FSB). In total 30 banks have been identified as globally systemic banks (G-SIBs) by FSB. These 30 banks are divided into four “buckets”.
3. D
The US space agency NASA has launched a first-of-its-kind mission named DART to change the path of an asteroid by intentionally crashing a spacecraft into it. DART stands for Double Asteroid Redirection Test.
4. C
The Union Minister of Coal, Mines and Parliamentary Affairs Shri Pralhad Joshi inaugurated the E-portal of accreditation scheme for Mineral exploration on November 23, 2021. The portal was inaugurated at the 5th National conclave on Mines and Minerals in New Delhi.
5. B
The former United Nations Secretary-General Ban Ki-moon has come out with his autobiography titled ‘Resolved: Uniting Nations in a Divided World’.
6. A
In Tennis, Alexander Zverev of Germany beat World No.2 Daniil Medvedev of Russia, 6-4, 6-4, in the men’s single finals to clinch 2021 ATP Finals title on November 21, 2021, held at Turin in Italy
7. C
The Government of India and the Asian Development Bank (ADB) have signed loan agreement worth $300 million on November 23, 2021 to strengthen and improve access to comprehensive primary health care in urban areas.
8. B
The United Nations designated International Day for the Elimination of Violence Against Women is celebrated worldwide on November 25.
9. C
Social Democratic party leader Magdalena Andersson has been elected as the first woman prime minister of Sweden during Parliamentary election on November 24, 2021.
10. A
Nobel Prize-winning economist Abhijit Banerjee has come out with his new book titled “Cooking To Save Your Life”.
11. B
In Cricket, Tamil Nadu has won the Syed Mushtaq Ali Trophy for 2021-22 by defeating Karnataka in the finals by four wickets.
12. A
2021 Theme “Orange the World: End Violence against Women Now!”.
13. C
The Department of Economic Research, State Bank of India has released the SBI Ecowrap report. In which SBI has published its report in the background of withdrawal of three agricultural laws. SBI has proposed 5 agricultural reforms (quantity guarantee clause, floor price auction, APMC infrastructure, institution of contract farming and symmetric procurement).
14. D
Union Minister of Science and Technology, Dr. Jitendra Singh has recently launched India’s first virtual science lab for children. This lab will give a virtual tour of the CSIR laboratories, which will connect the students with scientists from across India, as well as explain the research infrastructure to the students.
15. C
A four-day Sagar Shakti exercise was organized in the Creek sector of Kutch Peninsula of Gujarat. During which India’s capability and readiness to face any multi-faceted security threat has been thoroughly tested.
16. B
NITI Aayog has recently launched “Sustainable Development Goals SDG Urban Index and Dashboard 2021-22”. In which Shimla has been ranked first in the list with the highest marks, while Coimbatore and Chandigarh have been ranked second and third. Of the 56 urban areas selected in this index, 44 have a population of more than one million
17. C
According to IQAir data, India has 46 cities in the world’s 100 most polluted cities in the year 2020, followed by 42 cities of China, Pakistan. There are 6 cities of Bangladesh, 4 cities of Bangladesh. The air quality rating of PM 2.5 in all these cities was above 50. IQAir is a Swiss air quality technology company.
18. D
World Prohibition Day is celebrated on 25th November all over the world. The main objective of this day is to bring sensitivity towards the treatment of violence towards animals and to inspire people towards vegetarianism so that a civilized and better society can be built.