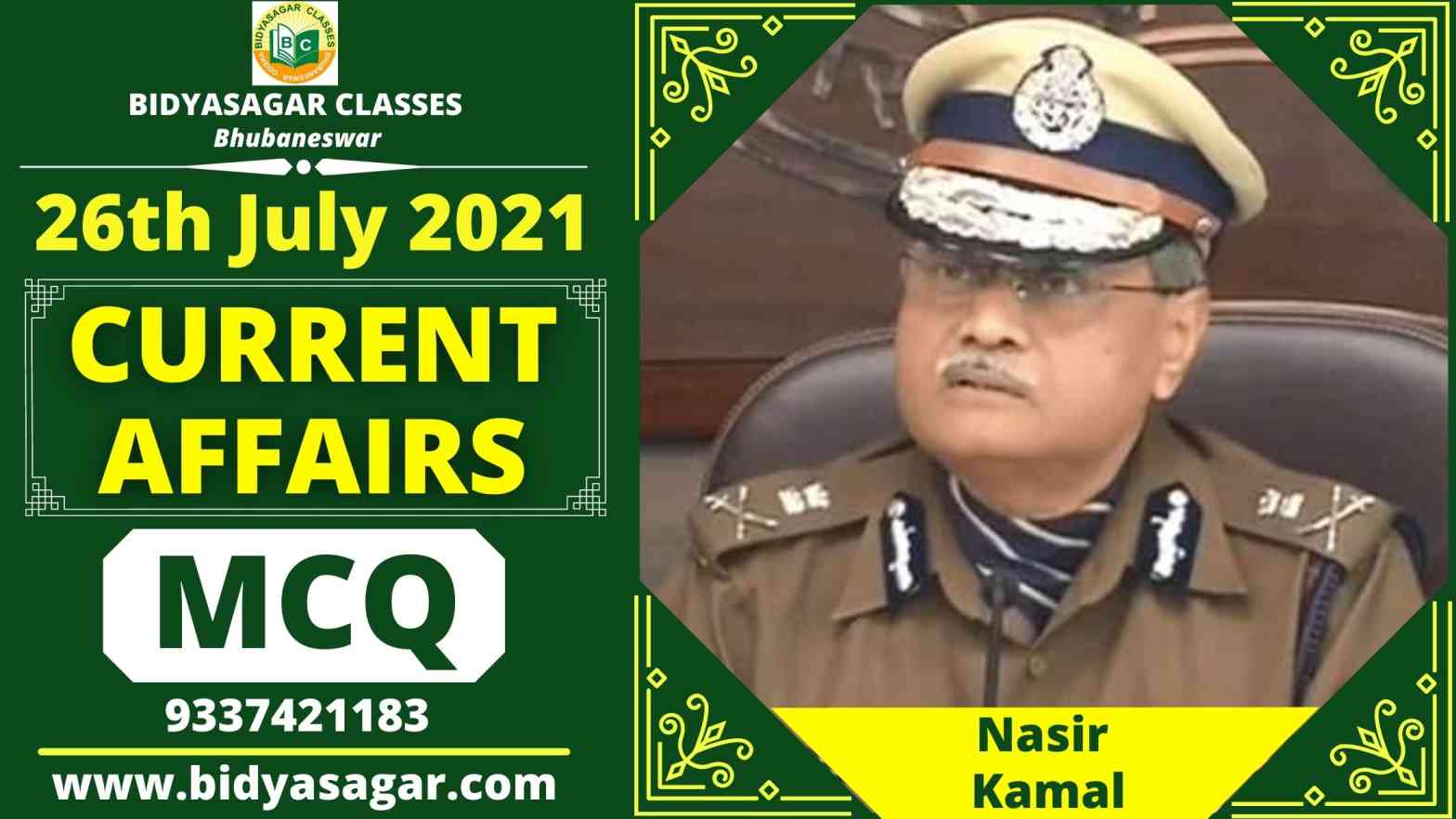 In this article, we will discuss MCQ on important current affairs of 26th July 2021 and their answers with explanations.

1. C. Vijayakumar has been appointed the which of these IT companies as the new Chairman and MD?
A. Wipro
B. HCL
C. TCS
D. Microsoft
2. Recently the Union Cabinet has approved the production incentive scheme for specialty steel with an incentive of how many Crores?
A. Rs 3322 Crores
B. Rs 4322 Crores
C. Rs 5322 Crores
D. Rs 6322 Crores
3. Which day is celebrated all over India on 26th July?
A. National Post Day
B. Kargil Vijay Diwas
C. National Science Day
D. National Knowledge Day
4. International Energy Agency and who has launched the report “Renewables Integration in India 2021”?
A. Planning Commission
B. NITI Aayog
C. Election Commission
D. Central Government
5. Which of the following IIT institute has launched Innovation Hub to find solutions for anti-drone technologies?
A. IIT Delhi
B. IIT Madras
C. IIT Delhi
D. IIT Kanpur
6. US President Joe Biden has approved how many Million Dollars emergency fund for Afghan migrants?
A. 100 Million Dollars
B. 200 Million Dollars
C. 300 Million Dollars
D. 400 Million Dollars
7. Indian tennis player Sumit Nagal has become which Indian tennis player to win a men’s singles match at the Olympic Games?
A. First
B. Second
C. Third
D. Fourth
8. Which of the following country has approved genetically modified “Golden Rice”?
A. Japan
B. China
C. Philippines
D. India
9. Government of India’s ‘Stand Up India Scheme’ has been extended to ______.
A. 2022
B. 2023
C. 2024
D. 2025
10. CRPF has signed an MoU with _______ for providing training to their personnel in advanced technologies.
A. C-DAC
B. Wipro
C. HCL
D. Google
11. India has been ranked ___ in the Top 10 Agricultural Produce Exporters 2019.
A. 7th
B. 8th
C. 9th
D. 10th
12. Who has won the Sparkassen Trophy?
A. Abhimanyu Mishra
B. Nihal Sarin
C. Ravichandran Ashwin
D. Vishwanathan Anand
13. Which Indian bureaucrat has been included in the UN Committee of Experts on International Cooperation in Tax Matters?
A. Rasmi R Das
B. Vinod Khanna
C. Vibhu Mishra
D. Nitin Arora
14. Who has been appointed as the Director General of Bureau of Civil Aviation Security?
A. Artika Shukla
B. Gaurav Kaushal
C. Nasir Kamal
D. Athar Aamir
15. Government of India has recently capped the trade margins of ___ medical devices.
A. 4
B. 5
C. 6
D. 7
16. Which state’s higher education board has added Environmental Studies and Disaster Management as a compulsory subject in higher education?
A. Odisha
B. Kerala
C. Punjab
D. Gujarat
17. Which country is all set to activate the world’s first clean nuclear reactor?
A. India
B. USA
C. Japan
D. China

1. B
Answer:HCL – C. Vijayakumar has been appointed as the new Chairman and MD of HCL IT Company following the resignation of Shiv Nadar, who played a leading role in the development of the Indian IT sector. He will serve in this post for 5 years. Shiv Nadar is a pioneer of computing and IT industry in India. He started HCL Group in 1976.
2. D
The Union Cabinet has recently approved a production linked incentive scheme of Rs 6322 crores for specialty steel. The objective of which is to promote domestic exports and manufacturing from this sector, this amount will be encouraged over five years and more than 5,25,000 jobs will be created through this scheme.
3. B
On 26 July, Kargil Vijay Diwas is celebrated all over India. On this day, the Kargil war took place between the armies of India and Pakistan in the year 1999 and lasted for about 60 days and ended on 26 July. India was victorious in this. This day is celebrated to honor the Indian soldiers who were martyred in the Kargil Vijay Diwas war.
4. B
International Energy Agency and NITI Aayog have jointly launched the report “Renewables Integration in India 2021”. The report is based on the results of workshops conducted in three states with the governments of Karnataka, Maharashtra and Gujarat to understand the energy transition challenges facing renewable-rich states.
5. D
IIT Kanpur has recently launched Innovation Hub to find solutions for Intrusion Detection System, Anti Drone Technology, Cyber Security System. IIT Kanpur’s C3i Hub is committed to fostering a vibrant ecosystem of cyber security start-ups.
6. A
US President Joe Biden has approved a 100 Million Dollars emergency fund for Afghan migrants. Which stems from the geopolitical situation in Afghanistan, including special immigration Afghan visa applicants. Also, about 2,500 Afghans can be brought in different batches to Fort Lee where they will be stationed.
7. C
Indian tennis player Sumit Nagal has recently become the third Indian tennis player to win a singles men’s match at the Olympic Games. He has become the first player to win for India in 25 years. He achieved this feat by defeating Istomin 6-4, 6-7(6), 6-4 in the match. Whereas in the 1996 Atlanta Games, Zeeshan Ali became the first Indian to win a singles match by defeating Fernando Meligeni of Brazil.
8. C
The Philippines has recently approved genetically modified “Golden Rice”. This “golden rice” has been approved for commercial production by the Philippines. This decision will save the lives of children in developing regions of the world and combat childhood blindness.
9. D
Government of India’s ‘Stand Up India Scheme’ has been extended to 2025. The scheme aims to extend loans via Scheduled Commercial Banks to the MSMEs. Government has recently included agriculture and allied activities to the beneficiary list.
10. A
Central Reserve Police Force (CRPF) has signed an MoU with Centre for Development of Advanced Computing (C-DAC) for training their personnel in advanced technologies. The troops of CRPF will be trained for using Internet of Things (IoT), Artificial-Intelligence (AI) and Cyber Security.
11. C
India has been ranked 9th in the Top 10 Agricultural Produce Exporters 2019. The ranking was prepared by the World Trade Organization. India has a share of 3 % in Global Agricultural Exports.
12. D
India’s Grand Master, Vishwanathan Anand has won the Sparkassen Trophy. He defeated Russia’s Vladmir Kramnik in the final round.
13. A
Rasmi R Das has been included in the UN Committee of Experts on International Cooperation in Tax Matters. He is currently serving as a Joint Secretary in the Ministry of Finance and Corporate Affairs.
14. C
Nasir Kamal has been appointed as the Director General of Bureau of Civil Aviation Security. Kamal is a 1986-batch senior IPS Officer from Uttar Pradesh Cadre.
15. B
Government of India has recently capped the trade margins of 5 medical devices. Those 5 medical devices are- Glucometer, Digital Thermometer, Nebulizer, Blood Pressure Monitoring devices and Pulse Oximeter.
16. A
The higher education board of Odisha has added Environmental Studies and Disaster Management as a compulsory subject. It will be added in the curriculum of 1st year of Arts, Commerce and Science.
17. D
China is all set to activate the world’s first clean nuclear reactor. The reactor will run on liquid thorium which is much cleaner and safer than uranium.