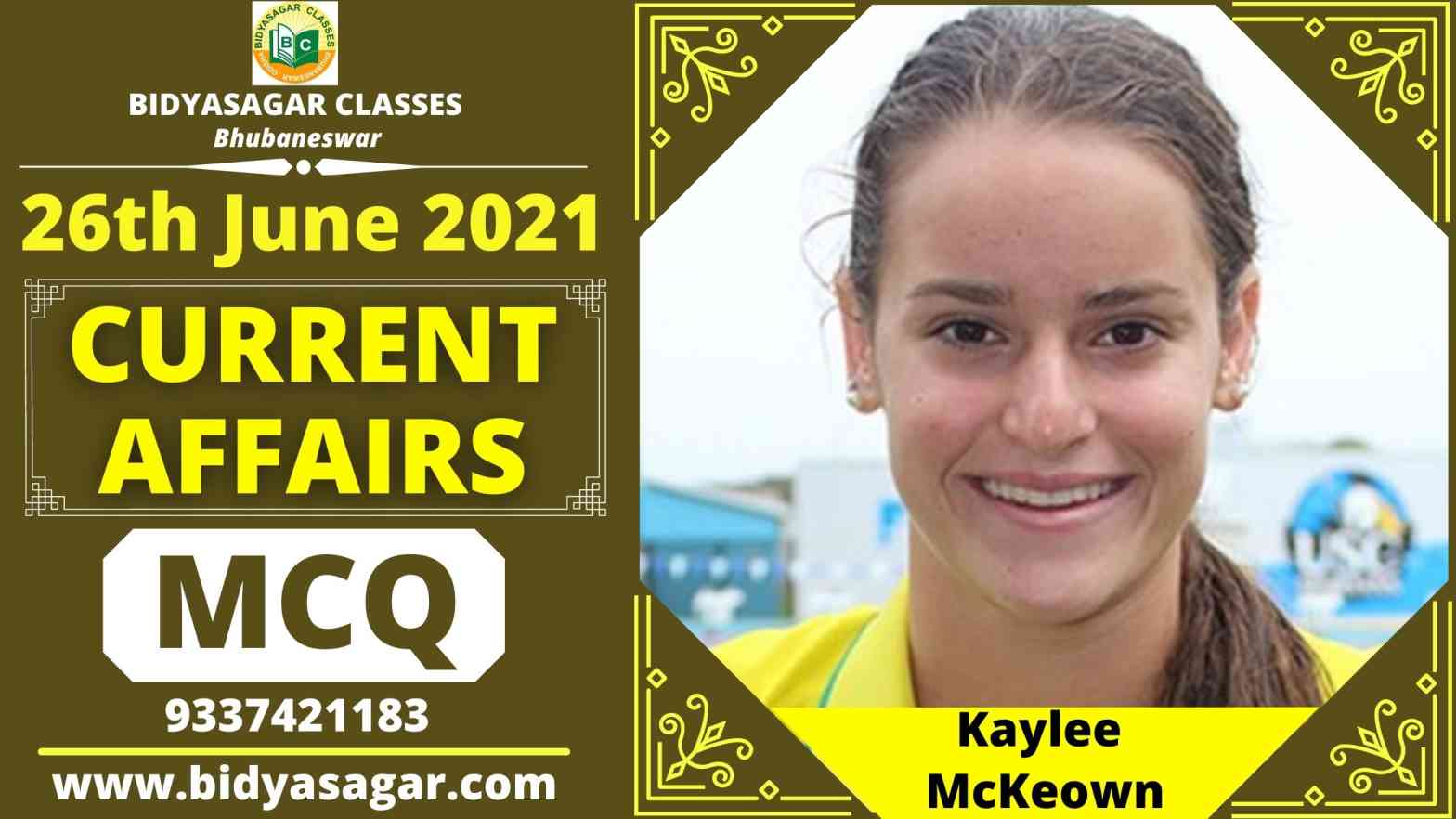 In this article, we will discuss MCQ on important current affairs of 26th June 2021 and their answers with explanations.

1. The government of India has signed a $32 million loans with which organization for improving healthcare services in Mizoram?
A. World bank
B. Asian Development Bank
C. International Monetary fund
D. Asian Infrastructure Investment Bank
2. S&P has projected India’s FY22 GDP growth forecast at ____________.
A. 8.5 %
B. 9.5 %
C. 10.5 %
D. 11.5 %
3. Which Airport has been awarded with Airport Council International (ACI) Director General’s  Roll of Excellence honour in Airport Service Quality?
A. Indira Gandhi International Airport, New Delhi
B. Chhatrapati Shivaji International Airport, Mumbai
C. Cochin International Airport, Cochin
D. Kempegowda International Airport, Bengaluru
4. UN body has endorsed a multinational project called “Committee on Earth Observation Satellites Coastal Observations, Applications, Services, and Tools (CEOS COAST)”. CEOS COAST Programme is co-led by _______________ and NOAA, US.
A. NASA
B. CNSA
C. Roscosmos
D. ISRO
5. With which country, Indian Navy has conducted a Passage Exercise in Indian Ocean Region on 23 June 2021?
A. Italy
B. France
C. Australia
D. USA
6. Olympic Medallist Karnam Malleswari Appointed First Vice-Chancellor Of Delhi Sports University. Karnam Malleswari is associated with which of the following sport?
A. Sprinting
B. Swimming
C. Weight-Lifting
D. Volleyball
7. Which of the following country will host the 9th Asian Ministerial Energy Roundtable (AMER9)?
A. China
B. Sri Lanka
C. Pakistan
D. India
8. ‘It’s a wonderful Life’ is a book authored by who among the following?
A. Arundhati Roy
B. Ruskin Bond
C. Vikram Seth
D. Salman Rushdie
9. World Vitiligo Day is observed on __________to build global awareness about vitiligo.
A. June 21
B. June 22
C. June 23
D. June 25
10. Name the subsonic cruise missile, which was recently test-fired by DRDO from an Integrated Test Range (ITR) at Chandipur in Odisha’s Balasore.
A. BrahMos
B. Nirbhay
C. BrahMos II
D. Naag
11. Australian swimmer _________ breaks the 100-meter backstroke world record at the South Australian Aquatic Centre with a time of 57.45 seconds.
A. Cate Campbell
B. Leisel Jones
C. Emily Seebohm
D. Kaylee McKeown
12. Which of the following bank has launched the Aarogyam healthcare business loan to provide enhanced support to the healthcare sector amid the pandemic?
A. State Bank of India
B. Central Bank of India
C. Bank of Baroda
D. Canara Bank
13. The renowned software developer and the creator of the McAfee antivirus software has passed away. Name that software pioneer?
A. Kim McAfee
B. Charles McAfee
C. Nick McAfee
D. John McAfee
14. Which bank has launched the ‘Pay Your Contact’ payment feature to enable its customers to send money using the beneficiary’s mobile number?
A. Axis Bank
B. Kotak Mahindra Bank
C. ICICI Bank
D. HDFC Bank
15. International Maritime Organization (IMO) celebrates the annual Day of the Seafarer (DoS) on ________ each year.
A. June 25
B. June 24
C. June 23
D. June 22
16. Which day is celebrated across the world on 26th June?
A. International Day in Support of Victims of Atrocities
B. World Refrigeration Day
C. International Day Against Drug Abuse and Illicit Trafficking
D. All of Above Days
17. Defence Minister Rajnath Singh has announced the induction of indigenous aircraft carrier INS Vikrant in the Indian Navy’s fleet from which year?
A. 2021
B. 2022
C. 2023
D. 2024
18. Shri Satyen Vaidya has been appointed as Additional Judge in which court recently?
A. Delhi High Court
B. Rajasthan High Court
C. Kolkata High Court
D. High Court of Himachal Pradesh
19. According to a recent astronomical finding, by what year could a dwarf planet-sized mega-comet pass Saturn?
A. 2022
B. 2025
C. 2029
D. 2031
20. Which of the following state government has recently announced a subsidy of up to Rs 1.5 lakh on electric vehicles?
A. Government of Kerala
B. Government of Gujarat
C. Government of Punjab
D. Government of Maharashtra

1. A
The Government of India, Government of Mizoram and the World Bank have signed a $32 million Mizoram Health Systems Strengthening Project to improve management capacity and quality of health services in Mizoram, particularly for the benefit of under-served areas and vulnerable groups.
2. B
S&P Global Ratings on 24th June cut India’s growth forecast for the current fiscal to 9.5 per cent, from 11 per cent earlier, and warned of risk to the outlook from further waves of COVID pandemic.
3. C
Cochin International Airport (CIAL) won Airport Council International (ACI) Director General’s Roll of Excellence honour in Airport Service Quality.
4. D
CEOS COAST Programme is co-led by ISRO and NOAA from US. This Programme aims to improve accuracy of coastal data on the basis of satellite and land-based observations.
5. D
India and USA are conduct Passage Naval Exercise on 23 June 2021. Indian naval ships will carry maritime patrol & other aircraft to participate the exercise with US Navy’s Ronald Reagan Carrier Strike Group during its transit through Indian Ocean Region.
6. C
The Delhi government appointed former Olympic medalist weightlifter Karnam Malleswari as the first Vice-Chancellor of Delhi Sports University.
7. B
Indian British author Ruskin Bond authored a new book titled ‘It’s a Wonderful Life’ is published by Aleph Book Company.
8. D
World Vitiligo Day is observed on June 25 to build global awareness about vitiligo. Vitiligo is a skin disorder leading to loss of colour in the skin creating a variety of patterns on the skin from loss of pigment.
9. B
The Defence Research and Development Organisation (DRDO) successfully test-fired the subsonic cruise missile ‘Nirbhay’ on June 24, 2021, from an Integrated Test Range (ITR) at Chandipur in Odisha’s Balasore.
10. B
The Defence Research and Development Organisation (DRDO) successfully test-fired the subsonic cruise missile ‘Nirbhay’ on June 24, 2021, from an Integrated Test Range (ITR) at Chandipur in Odisha’s Balasore.
11. D
Australian swimmer Kaylee McKeown breaks the 100-meter backstroke world record at the South Australian Aquatic Centre with a time of 57.45 seconds from the previous mark of 57.57 seconds set by American Regan Smith in 2019.
12. A
The State Bank of India (SBI) has launched the Aarogyam healthcare business loan to provide enhanced support to the healthcare sector amid the pandemic.
13. D
British-American Software pioneer, John David McAfee, the creator of the McAfee antivirus software, has passed away.
14. B
Kotak Mahindra Bank (KMBL) has launched an innovative payment feature called ‘Pay Your Contact’, for its customers, on its mobile banking app.
15. A
The International Maritime Organization (IMO) celebrates the annual Day of the Seafarer (DoS) on June 25 each year to pay respect to Seafarers and sailors who help the entire world function by conducting sea transport.
16. D
June 26 is celebrated worldwide as “International Day in Support of Victims of Atrocities”, “World Refrigeration Day” and “International Day Against Drug Abuse and Illicit Trafficking”. The International Day against Drug Abuse and Illicit Trafficking is observed worldwide to spread awareness against drug abuse and illegal trafficking.
17. B
Defense Minister Rajnath Singh has announced the induction of indigenous aircraft carrier INS Vikrant in the Indian Navy’s fleet from the year 2022. INS Vikrant is also known as IAC-1. It is being manufactured by Cochin Shipyard Limited. Its length is 260 meters, width 60 meters and its weight is 40000 tons.
18. D
The President of India has recently appointed Mr. Satyen Vaidya as Additional Judge in the Himachal Pradesh High Court under clause (1) of Article 224 of the Constitution. His tenure will be of 2 years. Shri Satyen Vaidya got himself registered as an advocate on 03 November 1986 as an advocate.
19. D
According to a recent astronomical findings, by the year 2031, a dwarf planet-sized mega-comet can cross the planet Saturn and will pass near the Sun. Mega-comets have recently entered the solar system. The width of this comet is estimated to be between 100 to 370 km.
20. B
The Government of Gujarat has recently announced the Gujarat Electric Vehicle Policy 2021, under which a subsidy of up to Rs 1.5 lakh will be given on electric vehicles. Now the state government will give Rs 870 crore as subsidy assistance in the next 4 years. Also, a subsidy of up to Rs 1.5 lakh or up to Rs 10,000 per kilowatt will be given on the purchase of an electric car.