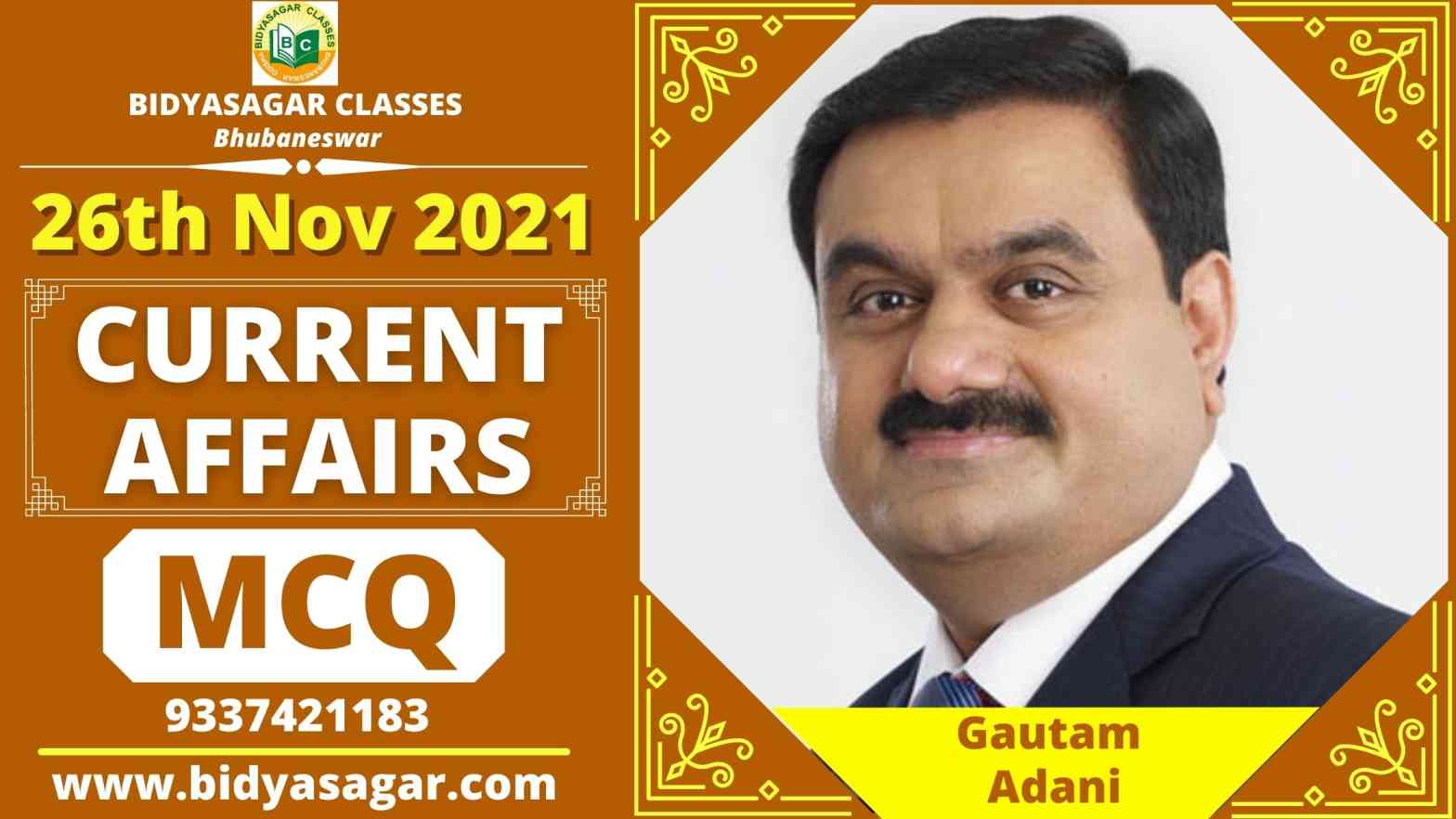 In this article, we will discuss MCQ on important current affairs of 26th November 2021 and their answers with explanations.

1. The Noida International Airport is the ____________ international airport of Uttar Pradesh
A) 4th
B) 5th
C) 6th
D) 3rd
2. What is the GDP growth rate prediction of India as per Moody’s in FY22?
A) 9.3%
B) 8.7%
C) 10.1%
D) 7.6%
3. Union Cabinet has approved to further extend the Pradhan Mantri Garib Kalyan Ann Yojana (PMGKAY) till which period?
A) July 2022
B) January 2022
C) May 2022
D) March 2022
4. Which country is hosting the 13th ASEM Summit in 2021?
A) Thailand
B) Singapore
C) Cambodia
D) South Korea
5. The 15th Trilateral Coast Guard Exercise ‘Dosti’ was held among the Indian Coast Guards with which countries?
A) Singapore and Nepal
B) Maldives and Sri Lanka
C) Australia and Maldives
D) Singapore and Sri Lanka
6. Government has changed the changed the base year for Wage Rate Index (WRI). What is the new base year?
A) 2018
B) 2020
C) 2014
D) 2016
7. When is the Constitution Day of India observed?
A) 26 November
B) 25 November
C) 24 November
D) 22 November
8. The 5th World Congress on Disaster Management (WCDM) was held in which city?
A) Hyderabad
B) Mumbai
C) Delhi
D) Guwahati
9. Which financial body has approved $1.5 billion loan to India for procuring safe and effective COVID Vaccine?
A) Asian Development Bank (ADB)
B) World Bank
C) New Development Bank (NDB)
D) European Bank for Reconstruction and Development (EBRD)
10. Who represented India at the 13th ASEM Summit?
A) Om Birla
B) Rajnath Singh
C) Nitin Gadkari
D) M. Venkaiah Naidu
11. Who is the author of the book ‘Conversations: India’s Leading Art Historian Engages with 101 themes, and More’?
A) Jyotindra Jain
B) Brijinder Nath Goswamy
C) Mahesh Sharma
D) Naman Ahuja
12. National Milk Day is commemorated every year in India on November 26 to mark the birth anniversary of_________
A) C. Rangarajan
B) M. S. Swaminathan
C) Dr. Verghese Kurien
D) R.S. Sodhi
13. Chun Doo-hwan who has passed away recently was the former President of which country?
A) Malaysia
B) Taiwan
C) Vietnam
D) South Korea
14. Name the head of the Expert Group on Minimum Wages & National Floor Wages which recommended change in the base year?
A) Arup Bose
B) S.P.Mukherjee
C) C. R. Rao
D) Biswatosh Sengupta
15. What is the GDP growth rate projection for India in FY23 as per Moody’s
A) 7.9%
B) 8.1%
C) 6.5%
D) 9.0%
16. Who has become the richest person in Asia, leaving behind Mukesh Ambani of Reliance Industries Limited?
A) Gautam Adani
B) Aziz Premji
C) Bill Gates
D) Gorg Bailey
17. The Government of India and which bank have recently signed a $300 million loan agreement to improve primary healthcare?
A) NABARD
B) Swiss Bank
C) Asian Development Bank
D) SBI
18. Name the Union Minister of Coal, Mines and Parliamentary Affairs, who has recently inaugurated the e-portal of Accreditation Scheme?
A) Rajnath Singh
B) Pralhad Joshi
C) Hardeep Singh Puri
D) Piyush Goyal
19. Recently who has started a new scheme named “Bharat Gaurav Yojana”?
A) NITI Aayog
B) Planning Commission
C) Indian Railways
D) Ministry of Finance
20. Which edition of “Maritime SheEO Conference” has been announced recently?
A) First
B) Second
C) Third
D) Fourth

1. B
Prime Minister Narendra Modi laid the foundation Stone of Noida International Airport at Jewar in Uttar Pradesh on November 25, 2021. The Jewar airport is the second international aerodrome in Delhi-National Capital Region (NCR). It is the fifth international airport in Uttar Pradesh. Uttar Pradesh has now become the state with the highest number of international airport in India.
2. A
India’s GDP growth rate prediction for FY22 as per Moody’s : 9.3%.
3. D
The Union Cabinet chaired by Prime Minister Narendra Modi has approved the extension of Pradhan Mantri Garib Kalyan Ann Yojana (PMGKAY) for another four months. The Phase V of PMGKAY scheme will be operational from December 2021 till March 2022.
4. C
The 13th edition of the ASEM (Asia-Europe Meeting) Summit has been organised on November 25 and 26, 2021. The Summit is being hosted by Cambodia as ASEM Chair.
5. B
The 15th edition of the biennial Trilateral Coast Guard Exercise ‘Dosti’ between the Maldives, India, and Sri Lanka was held from November 20 to 24 in Maldives. Indian Coast Guard was represented by ICGS Vajra and ICGS Apoorva.
6. D
Ministry of Labour & Employment has changed the base year for Wage Rate Index (WRI) from 1963-65=100 to 2016=100.
7. A
In India, the Constitution Day is observed every year on November 26 to mark the anniversary of the adoption of the Constitution of the country.
8. C
The fifth edition of the World Congress on Disaster Management (WCDM) was virtually inaugurated by the Union Defence minister Shri Rajnath Singh on November 24, 2021. The event has been organised at the Indian Institute of Technology (IIT) Delhi campus from November 24-27, 2021.
9. A
The Asian Development Bank (ADB) has approved $1.5 billion loan (approx Rs 11,185 crore) to help the Government of India purchase safe and effective vaccines against the coronavirus (COVID-19)
10. D
The Indian delegation is being led by Vice President M. Venkaiah Naidu through virtual platform.
11. B
Renowned art historian and critic Brijinder Nath Goswamy has announced his new book based on and around the Indian arts. The book is titled “Conversations: India’s Leading Art Historian Engages with 101 themes, and More”.
12. C
Every year November 26 is celebrated as National Milk Day in India.The day is being observed since 2014 to commemorate the birth anniversary of the Father of India’s White Revolution, Dr. Verghese Kurien.
13. D
Former South Korean President Chun Doo-hwan has passed away due to cancer. He was 90 years old.
14. B
The government had formed an Expert Group on Minimum Wages & National Floor Wages headed by Prof. S.P.Mukherjee. Based on the recommendation of this committee, the base year has been changed.
15. A
India’s GDP growth rate prediction for FY23 as per Moody’s : 7.9%.
16. A
According to experts this group is based on market cap According to a report, Gautam Adani, the founder and chairman of the Adani Group, was recently Mukesh Ambani of Reliance Industries Limited. He has become the richest person in Asia, leaving behind. Gautam Adani’s net worth has seen an increase of over USD 83.89 billion in the last 20 months.
17. C
The Asian Development Bank and the Government of India have recently signed a $300 million loan agreement to improve primary healthcare. which aims to strengthen the comprehensive primary healthcare and epidemiological preparedness in urban areas program.
18. B
Union Minister of Coal, Mines and Parliamentary Affairs Shri Pralhad Joshi has recently inaugurated the e-portal of the Accreditation Scheme. In the year 2016, the first National Conference on Mines and Minerals was organized in Raipur. This portal will help in considering policy reforms to bring more growth in India’s mining sector.
19. C
Indian Railways has recently started a new scheme named “Bharat Gaurav Yojana”. Under this scheme, private tour operators can take trains on lease from the railways and run these trains on any circuit of their choice. Also, the railways has kept 3033 ICF coaches for this, which is equivalent to about 150 trains.
20. B
Recently the second edition of “Maritime SheEO Conference” has been announced. Which is conceptualized by Sanjam Shahi Gupta. who is its founder. It provides services focused on the business case for Maritime SheEO diversity.