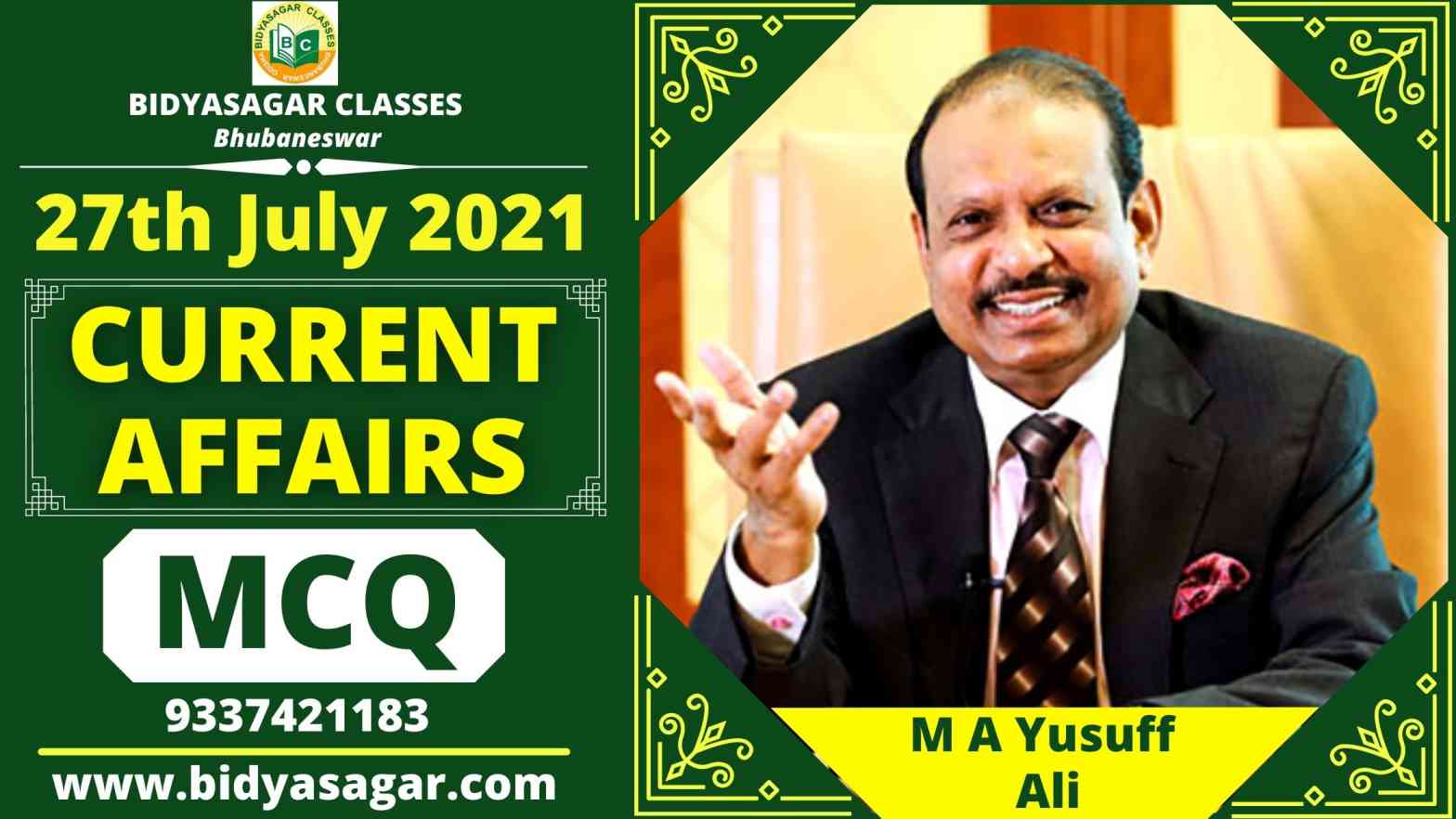 In this article, we will discuss MCQ on important current affairs of 27th July 2021 and their answers with explanations.

1. The Chief Minister of which of the following state BS Yediyurappa has recently resigned from his post?
A. Gujarat
B. Kerala
C. Karnataka
D. Punjab
2. From which state of India has recently the first consignment of vegetables been exported to UAE?
A. Gujarat
B. Punjab
C. Uttarakhand
D. Maharashtra
3. Home Minister Amit Shah has launched Green Sohra Afforestation Campaign in which city?
A. Pune
B. Ladakh
C. Cherrapunji
D. Delhi
4. The Rudreshwar Temple located in which state of India has been included in the UNESCO World Heritage List?
A. Kerala
B. Meghalaya
C. Sikkim
D. Telangana
5. ISRO has recently started Merchandiser Program with how many Companies?
A. 2 Companies
B. 4 Companies
C. 6 Companies
D. 8 Companies
6. On 27th July, whose foundation day is celebrated all over India?
A. Central Reserve Police Force Raising Day
B. Parliament Foundation Day
C. NITI Aayog Foundation Day
D. Indian Air Force Raising Day
7. Which of these countries has announced the launch of its own social media platform “Jogajog”?
A. Australia
B. Sri Lanka
C. Bangladesh
D. Japan
8. Which of the following country has announced to activate the world’s first nuclear reactor?
A. Japan
B. America
C. Russia
D. China
9. The book titled “An Ordinary Life: Portrait of an Indian Generation” has been authored by _______.
(A) T. N. Seshan
(B) Sunil Arora
(C) Ashok Lavasa
(D) Sushil Chandra
10. Which of the following site has been inscribed as India’s 39th UNESCO World Heritage List?
(A) Kakatiya Rudreswara Temple
(B) Bhimbetka Rock Shelters
(C) Mahabodhi Temple
(D) Gangaikonda Cholapuram
11. Which of the following country has joined International Solar Alliance (ISA) recently on July 17?
(A) Finland
(B) Norway
(C) Sweden
(D) Switzerland
12. Who among the following has been appointed as the Managing Director of HCL Technologies Ltd?
(A) Shiv Nadar
(B) C Vijayakumar
(C) Shyam Srinivasan
(D) Hitendra Dave
13. Yang Qian has won the first Gold Medal of the Tokyo Olympics in the women’s 10m air rifle. She is from which country?
(A) Vietnam
(B) Thailand
(C) Indonesia
(D) China
14. In 2019, India ranked which of the following position with a share of 3.1% in global agricultural exports?
(A) 10
(B) 11
(C) 15
(D) 09
15. Senior IPS officer Nasir Kamal has recently been designated to which of the following Portfolio?
(A) Director-General of the Bureau of Investigation
(B) Director-General of the Bureau of Civil Aviation Security
(C) Director-General of the Central Bureau of Investigation
(D) Director-General of Intelligence Bureau
16. Which one of the following has recently signed an MoU with C-DAC to train manpower of force in advanced technologies, undertake joint projects?
(A) BSF
(B) Assam Riffles
(C) CISF
(D) CRPF
17. Which of the following country has reported cases of ‘Norovirus’ infection
(A) United Kingdom
(B) USA
(C) Japan
(D) China
18. Who has been appointed as the Vice-Chairman of Abu Dhabi Chamber of Commerce and Industry (ADCCI)?
(A) Sheel P. Gautam
(B) M A Yusuff Ali
(C) Mohamed Saeed
(D) Chandrika Gunnarsson
19. Name the bank, who has got a loan of $250 million from International Finance Corporation (IFC), the investment arm of the World Bank Group.
(A) IDBI Bank
(B) Axis Bank
(C) ICICI Bank
(D) HDFC Bank
20. Name Bangladesh’s legendary folk singer and freedom fighter, passed away recently.
(A) Sabina Yasmin
(B) Habib Wahid
(C) Rezwana Choudhury Bannya
(D) Fakir Alamgir

1. C
The Chief Minister of Karnataka state, BS Yediyurappa has recently resigned from his post. Whereas recently, two years of BJP government have been completed in Karnataka. He first became the Chief Minister of Karnataka on 12 November 2007, but had to resign just seven days later on 19 November 2007. After this, on 30 May 2008, he became the Chief Minister for the second time.
2. C
The first consignment of vegetables including curry leaves, okra, pear and bitter gourd recently received from farmers from the state of Uttarakhand has been exported to UAE. The export of vegetables comes after a consignment of millet grown in Uttarakhand was exported to Denmark in May 2021.
3. C
Home Minister Amit Shah has recently launched Green Sohra Afforestation Campaign in Sohra, Cherrapunji. He has given the slogan “Evergreen Northeast” while launching the campaign. This campaign will be run by Assam Rifles and Meghalaya. Along with the Harit Sohra Afforestation Campaign, the Greater Sohra Water Supply Scheme has also been inaugurated.
4. D
The Rudreshwar Temple, located at Palampet in Mulugu district of Telangana state, India, has recently been included in the World Heritage List. They have become the 39th World Heritage Site of India. Rudreshwar Temple also known as Ramappa Temple was proposed by the Government of India for UNESCO World Heritage Site Tag, 2019.
5. D
Indian Space Research Organization has recently started the merchandiser program, which will be customized according to the space-themed, in collaboration with 8 Companies. After the launch of this program, all interested will be able to buy ISRO’s merchandise products like T-shirts, scale models, space-themed educational games, mugs, science toys etc.
6. A
On 27th July Central Reserve Police Force Raising Day is celebrated all over India. On the occasion of this day, traditional programs held annually in the CRPF campus are organized through webinar. On 27 July 1939, the Central Reserve Police Force was established in Neemuch itself. During the then British rule, it was named ‘Crown Representative Police’.
7. C
Bangladesh has recently announced the launch of its own social media platform “Jogajog”. Which will be an alternative to the worldwide popular Facebook and “Alapone” will be an alternative to WhatsApp. Through the Jogajog app, the country’s entrepreneurs will be able to create their own versions of online marketplaces and clusters for data, information and communication.
8. D
A scientist from the Chinese government has announced to activate the world’s first nuclear reactor. Which does not require water for cooling. This reactor will run on liquid thorium instead of uranium and is expected to be safer than conventional reactors.
9. C
Former election commissioner Ashok Lavasa has come out with a book titled “An Ordinary Life: Portrait of an Indian Generation.”
10. A
The Kakatiya Rudreswara Temple, (also known as the Ramappa Temple) at Palampet, Mulugu district, near Warangal in Telangana has been inscribed on UNESCO’s World Heritage list, during the 44th session of the World Heritage Committee of UNESCO. With this latest induction, there are 39th World Heritage Sites located in India.
11. C
Sweden has ratified the framework agreement for the International Solar Alliance (ISA) and is now a member of the global platform, which is an initiative of India aimed at promoting renewable energy and sustainable development.
12. B
Vijayakumar, president and chief executive officer, has been appointed as the managing director for five years.
13. D
Yang Qian of China took gold in the women’s 10m air rifle final to secure the first gold medal of the 2020 Summer Games at the Asaka Shooting Range
14. D
India cracked into the top ten list of agricultural produce exporters in 2019 with a significant share within the export of rice, soya beans, cotton and meat, according to a World Trade Organisation (WTO) report on trends in world agricultural trade in recent 25 years.
15. B
Senior IPS officer Nasir Kamal has been appointed the Director-General of the Bureau of Civil Aviation Security (BCAS).
16. D
The Central Reserve Police Force, CRPF has signed a MoU with Centre for Development of Advanced Computing C-DAC to train the manpower of the force in advanced technologies and undertake joint projects.
17. A
The United Kingdom is now reporting an outbreak of norovirus. Public Health England (PHE) recently issued a warning regarding Norovirus. England has recorded 154 cases of norovirus in the country.
18. B
Lulu Group chairman, M A Yusuff Ali has been appointed as the Vice-Chairman of Abu Dhabi Chamber of Commerce and Industry (ADCCI).
19. D
HDFC Ltd has got a loan of $250 million from International Finance Corporation (IFC), the investment arm of the World Bank Group, to be used by India’s largest housing finance company for green housing.
20. D
Bangladesh’s legendary folk singer, Fakir Alamgir has passed away due to complications from COVID-19. He was born on February 21, 1950, in Faridpur, Alamgir began his music career in 1966.