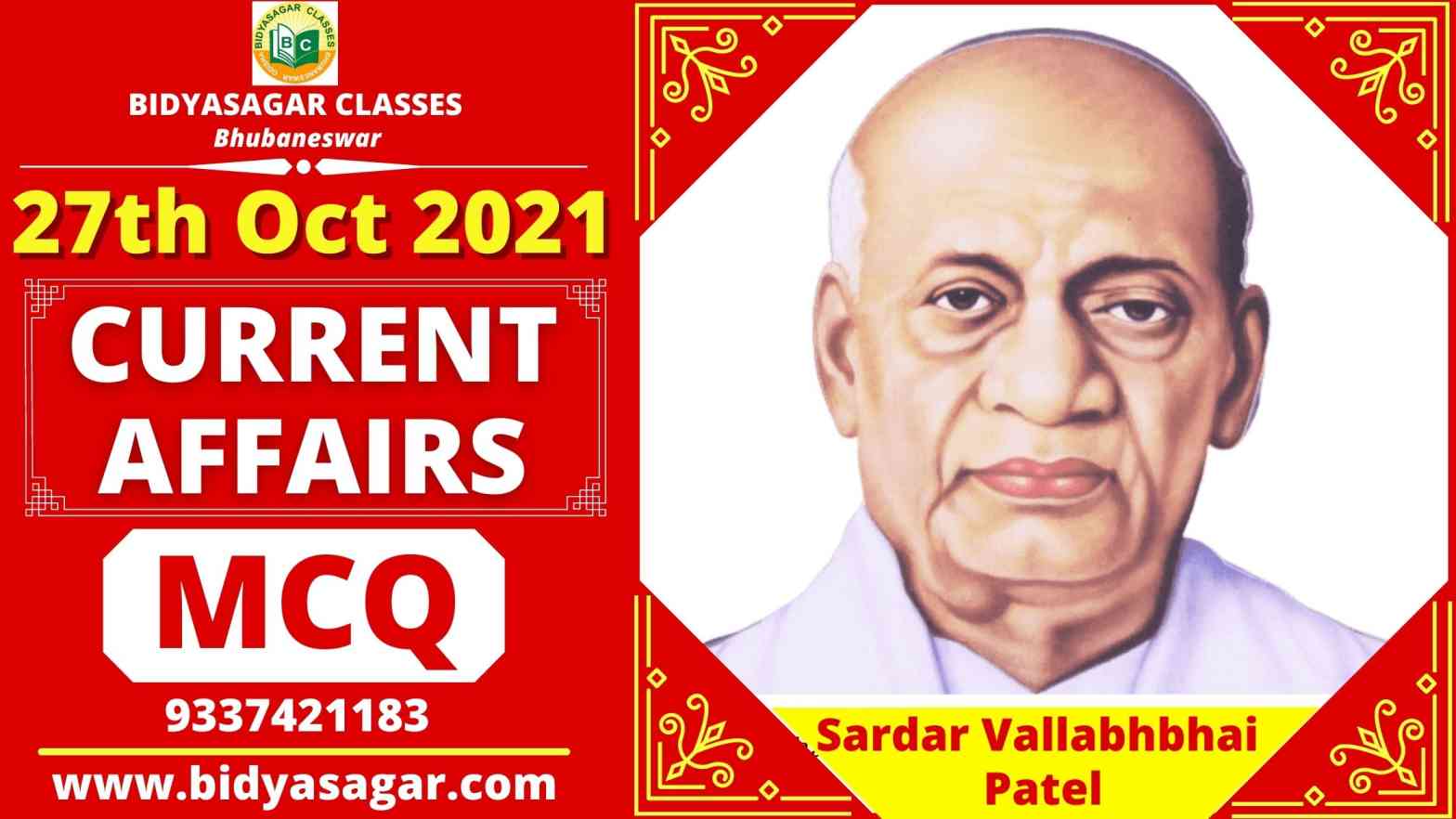 In this article, we will discuss MCQ on important current affairs of 27th October 2021 and their answers with explanations.

1. The Hyderabad Cricket Association has launched Guinness Book of World Records certified, world’s biggest bat in the city. What is the height of the bat?
A) 56.10 feet
B) 35.50 feet
C) 48.60 feet
D) 60.80 feet
2. India’s first ever Radio over Internet Protocol (ROIP) System for Major port of the country has been unveiled at which of these ports?
A) Kandla Port
B) Jawaharlal Nehru Port
C) Paradip Port
D) Syama Prasad Mookerjee Port
3. The first-ever state-government-owned Wildlife DNA analysis laboratory has been launched in which city?
A) Guwahati
B) Hyderabad
C) Nagpur
D) New Delhi
4. Which ministry has launched the Amrit Mahotsav Podcast as a part of Azadi ka Amrit Mahotsav celebration?
A) Ministry of Health & Family Welfare
B) Ministry of Culture
C) Ministry of Education
D) Ministry of Power
5. The exercise “Konkan Shakti 2021” is a maiden Tri-Service exercise of Indian Armed Forces with which country?
A) United Kingdom
B) Australia
C) Israel
D) Sri Lanka
6. Finance Minister Nirmala Sitharaman attended the 6th Annual Meeting of the Board of Governors of Asian Infrastructure Investment Bank (AIIB) virtually. What was the theme of the meeting?
A) Mobilizing Finance for Infrastructure: Innovation and Collaboration
B) Connecting For Tomorrow
C) Cooperation and Connectivity
D) Investing Today and Transforming Tomorrow
7. What amount of project readiness financing (PRF) loan has been signed between India and ADB to support urban mobility in Aizawl in Mizoram?
A) $2.5 million
B) $4.5 million
C) $3.5 million
D) $5.5 million
8. Which bank has launched the QR Code Sound Box to provide instant voice-based payment alerts to merchant partners?
A) Punjab National Bank
B) IndusInd Bank
C) AU Small Finance Bank
D) Equitas Small Finance Bank
9. Every year the week from October 24 to 30 is marked as ____________
A) Week of Deaf People
B) Space Week
C) Investor Week
D) Disarmament Week
10. In 2021, the Central Vigilance Commission (CVC) has organised the Vigilance Awareness Week from 26 October to 01 November. The Vigilance Awareness Week is organised annually during the week in which the birthday of _________ is held
A) Chandra Shekhar Azad
B) Sardar Vallabhbhai Patel
C) Sarvepalli Radhakrishnan
D) Subhas Chandra Bose
11. What is the theme of Vigilance Awareness Week 2021?
A) Independent India @75: Self Reliance with Integrity
B) Integrity A way of life
C) Vigilant India, Prosperous India
D) Eradicate Corruption-Build a New India
12. The United Nations observes the World Day for Audiovisual Heritage on which of these days?
A) 25 October
B) 27 October
C) 26 October
D) 24 October
13. What is the theme of the World Day for Audiovisual Heritage?
A) Discover, Remember and Share
B) Engage the Past Through Sound and Images
C) Your Window to the World
D) It’s your story – don’t lose it
14. The 6th Annual Meeting of the Board of Governors of Asian Infrastructure Investment Bank (AIIB) was organised by AIIB in partnership with which country?
A) UAE
B) India
C) South Korea
D) China
15. The sea phase of the exercise “Konkan Shakti 2021” has been organised at which place?
A) Bay of Bengal
B) Pacific Ocan
C) Indian Ocean
D) Arabian Sea
16. According to the data released by the Sample Registration System, the infant mortality rate in India has come down to how much?
A) 20
B) 30
C) 40
D) 45
17. Who among the following plans to constitute a panel for the National Employment Policy?
A) Planning Commission
B) Central Government
C) World Bank
D) World Health Organization
18. First case of Zika virus has been reported from Kanpur in which state of India?
A) Madhya Pradesh
B) Arunachal Pradesh
C) Uttar Pradesh
D) Kerala
19. Which of the following ministry has recently constituted a National Steering Committee?
A) Ministry of Information and Broadcasting
B) NITI Aayog
C) Cultural Ministry
C) Ministry of Education
20. Government of India and who has signed an agreement to finance loan to promote urban mobility in Mizoram?
A) NABARD
B) Asian Development Bank
C) Ministry of Finance
D) State Bank Of India