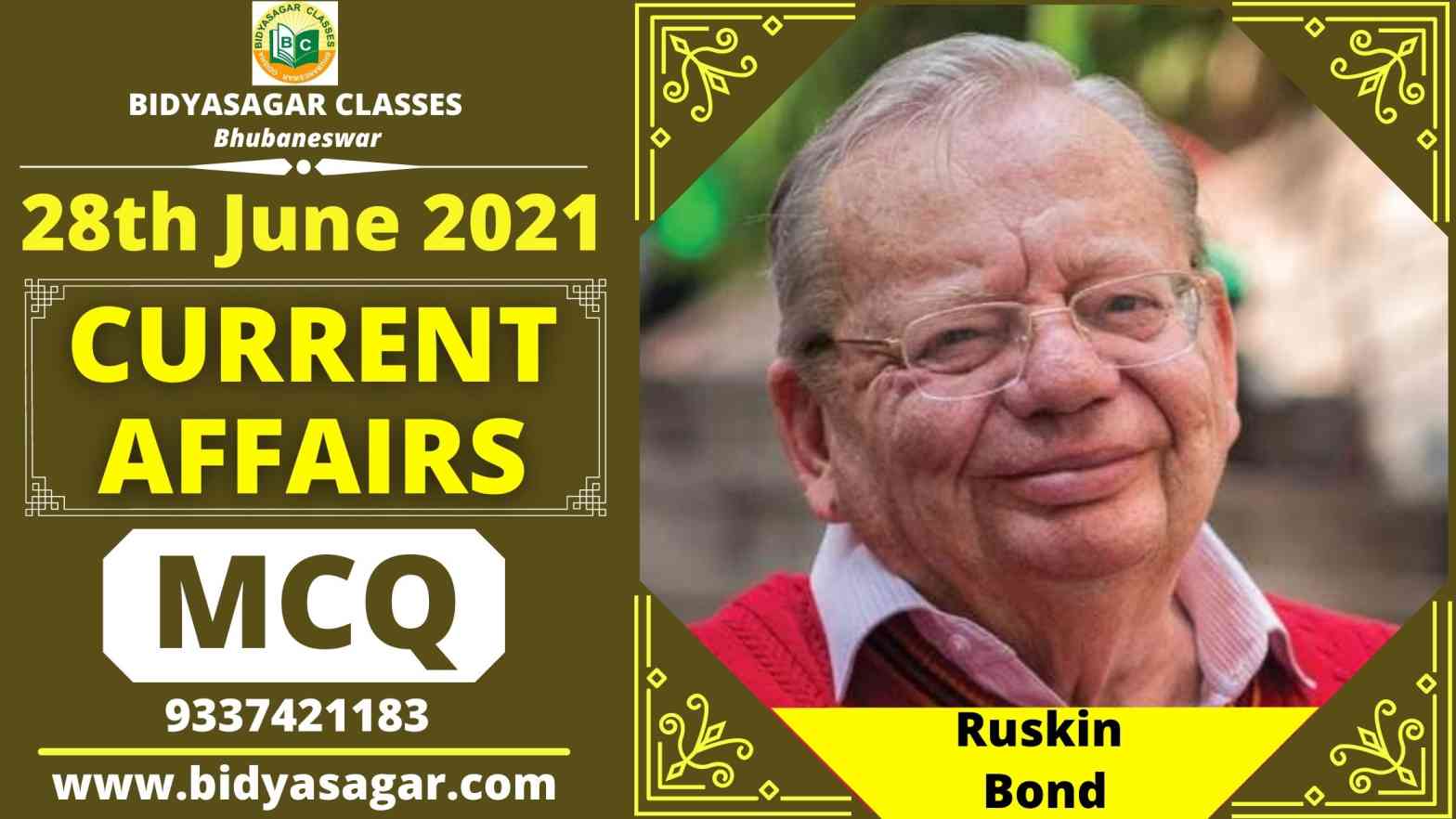 In this article, we will discuss MCQ on important current affairs of 28th June 2021 and their answers with explanations.

1. In which Indian State Recently inaugurated Zen Garden and Kaizen Academy by Prime Minister Shri Narendra Modi?
A. Pune
B. Chennai
C. Delhi
D. Ahmedabad
2. Who has recently inaugurated in Jammu and Kashmir Kathua district mega quintal capacity seed processing plant?
A. Dr. Manmohan Singh
B. Dr. Harshvardhan Singh
C. Dr. Jitendra Singh
D. Dr. Ram Vilas Sharma
3. In Which Indian State Chandipur coast DRDO has recently successfully test-fired an upgraded version of the 122 mm caliber rocket?
A. Pune
B. Odisha
C. Kerala
D. Uttarakhand
4. Recently India has crossed how many Croress Covid-19 vaccination?
A. 32 Crores
B. 40 Crores
C. 55 Crores
D. 65 Crores
5. Kerala Swimmer Sajan Prakash has recently become which Indian swimmer to qualify for the Tokyo Olympics?
A. First
B. Third
C. Fourth
D. Seventh
6. Which of the following IIT institute has recently developed Rapid Antigen Test Kit for Covid-19?
A. IIT Pune
B. IIT Chennai
C. IIT Kharagpur
D. IIT Delhi
7. In which country order to promote the export of fruits containing exotic species, “Dragon Fruit” has been recently exported?
A. Sri Lanka
B. United Arab Emirates
C. Nepal
D. Afghanistan
8. In Which country’s health minister Matt Hancock has recently resigned from his Designation?
A. Japan
B. Britain
C. Austria
D. America
9. As per the Mercer Cost of Living Survey, __________ is the world’s most expensive city for foreign workers.
A. Mumbai
B. Sarjah
C. Gurgaon
D. Ashgabat
10. Which of the following has been named as the ‘Strongest Hotel Brand’ in the world?
A. Taj
B. Oberoi
C. Trident
D. Synergy
11. India has been ranked ___ among 46 countries in the Reuters Institute Digital News Report, 2021 on the level of trust in news.
A. 29
B. 30
C. 31
D. 32
12. Government of India has extended the FAME-II Scheme till March, ________.
A. 2022
B. 2024
C. 2026
D. 2028
13. Who has become the 1st Indian swimmer to qualify for the Tokyo Olympics?
A. Pankaj Singh
B. Vinod Sinha
C. Vinod Sinha
D. Sajan Prakash
14. United Nations MSME Day is globally observed on ___ June every year.
A. 27th
B. 26th
C. 25th
D. 24th
15. ________________ has been appointed as the acting Central Vigilance Commissioner of India.
A. Praveen Sinha
B. Nittoor Srinivasa
C. Suresh N Patel
D. K V Chowdhary
16. Which Operating System has been recently launched by Microsoft?
A. Windows 10.1
B. Windows 11
C. Windows 12
D. Android 11
17. US-based EV manufacturer, Triton will set up its plant in _________.
A. Karnataka
B. Tamil Nadu
C. Telangana
D. Gujarat
18. Which international monetary organization has approved a USD 125 million program for the 2nd phase of ‘Resilient Kerala’ Program?
A. IMF
B. ADB
C. UNEP
D. World Bank
19. “It’s a Wonderful Life: Roads to Happiness” book has been authored by?
A) Arundhati Roy
B) Krishna Saksena
C) Jhumpa Lahiri
D) Ruskin Bond
20. Micro, Small and Medium-sized Enterprises Day is observed on?
A) 27 June
B) 28 June
C) 29 June
D) 30 June

1. D
Prime Minister Shri Narendra Modi has recently inaugurated Zen Garden and Kaizen Academy at AMA, Ahmedabad through video conference.
2. C
Union Minister Dr. Jitendra Singh has recently inaugurated a mega quintal capacity seed processing plant with 16 lakh seed production and 24 lakh seed processing capacity in Kathua district of Jammu and Kashmir.
3. B
Defense Research and Development Organization recently successfully test fired advanced range versions of indigenously developed 122 mm caliber rocket from a multi-barrel rocket launcher at the Integrated Test Range off Chandipur coast of Odisha.
4. A
Recently, the number of Covid-19 vaccinations in India has crossed 32 Croress. So far 32,11,43,649 people have been vaccinated.
5. A
Kerala swimmer Sajan Prakash recently became the first Indian swimmer to qualify for the Tokyo Olympics. He achieved the feat by clocking 1 minute 56.38 seconds in the men’s 200m butterfly at the Sete Colli Trophy in Rome.
6. D
IIT Delhi has recently developed Rapid Antigen Test Kit for Covid-19 which was recently launched by the Minister of State for Education, Mr. Sanjay Dhotre. This kit has been developed by researchers under the leadership of Dr. Harpal Singh. He is a professor at the Center for Biomedical Engineering, IIT Delhi.
7. B
To boost export of exotic species of fruits recently the first consignment of fiber and mineral rich ‘Dragon Fruit’, also known as Kamalam was sent to UAE. Exported to Dubai. The scientific name of this dragon fruit is Hyloceresundatus.
8. B
Britain’s Health Minister Matt Hancock has recently resigned from his post due to allegations of breaking the rules of social distancing.
9. D
As per the Mercer Cost of Living Survey, Ashgabat is the world’s most expensive city for foreign workers. Mumbai has been named as India’s most expensive city for the migrant workers.
10. A
Taj has been named as the ‘Strongest Hotel Brand’ in the world by Brand Finance. The report has been titled as ‘Hotels 50 2021’ Report. Hotel Taj secured a score of 89.3 out of 100.
11. C
India has been ranked 31st among 46 countries in the Reuters Institute Digital News Report, 2021 on the level of trust in news. Finland topped the list with an overall trust of 65 % whereas USA secured the last rank with 29 % trust on the news.
12. B
Government of India has extended the FAME-II Scheme till March, 2024. The Faster Adoption and Manufacturing of (Strong) Hybrid and Electric Vehicles in India) (FAME-II) was supposed to expire in 2022.
13. C
Sajan Prakash has become the 1st Indian swimmer to qualify for the Tokyo Olympics. He completed 200m butterfly stroke in 1 minute 56.38 seconds at the Sette Colli Trophy held in Rome.
14. A
United Nations Micro Small and Medium Enterprises (MSME) Day is globlly observed on 27th June every year. It was declared by the UNGA on 27th June, 2017 to celebrate the work of MSMEs in global and local economy.
15. C
Suresh N Patel has been appointed as the acting Central Vigilance Commissioner of India. He will succeed Sanjay Kothari as his tenure got completed on 23rd June, 2021.
16. B
Windows 11 has been recently launched by Microsoft. The new OS is being said to bring the next generation of computing.
17. C
US-based electric vehicle manufacturer, Triton will set up its plant in Telangana. Triton will directly compete with Tesla India in the luxury EV segment.
18. D
World Bank has approved a USD 125 million program for supporting the 2nd phase of ‘Resilient Kerala’ Program. This will improve the preparedness against natural disasters.
19. D
The famous author Ruskin Bond has come out with his new book named “It’s a Wonderful Life: Roads to Happiness“. Ruskin Bond is a recipient of the Padma Bhushan award.
20. A
The day of 27th June is observed as United Nations Micro, Small, and Medium-sized Enterprises Day. it aims to celebrate the work of MSMEs in local and global economies and their contribution to sustainable development.