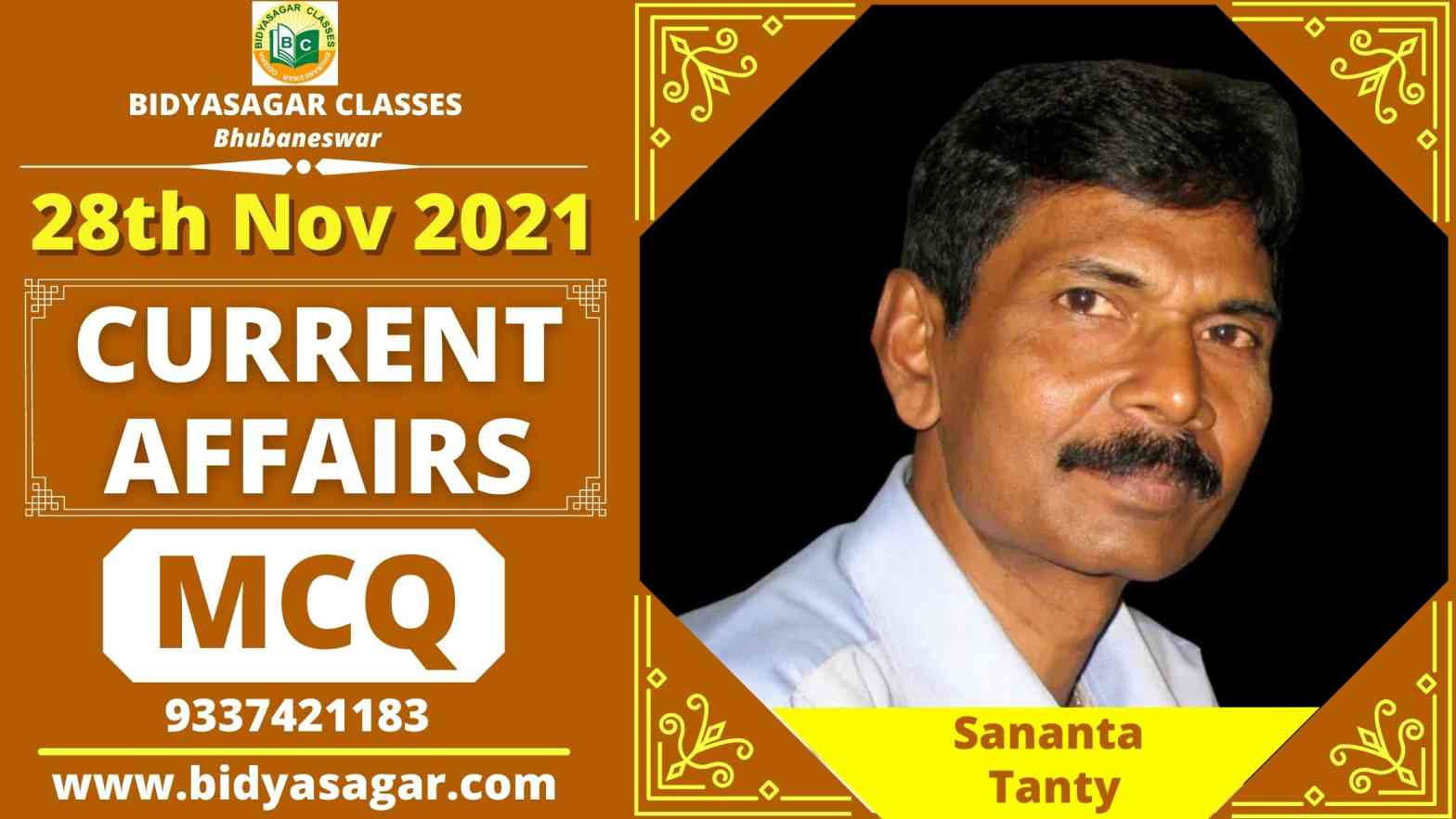 In this article, we will discuss MCQ on important current affairs of 28th November 2021 and their answers with explanations.

1. The Reserve Bank of India has recently increased the cap on promoters’ stake in private bank to ___ percent of the paid-up voting equity share capital of the bank.
A) 26%
B) 15%
C) 21%
D) 18%
2. Who has been appointed as the new President of INTERPOL?
A) Juan Carlos HERNÁNDEZ
B) Garba Baba UMAR
C) Michael A. HUGHES
D) Ahmed Nasser AL-RAISI
3. Under RBI’s new directives, what is the minimum initial capital requirement to set up a new universal bank?
A) Rs 1000 crore
B) Rs 800 crore
C) Rs 700 crore
D) Rs 500 crore
4. Which state has emerged as the poorest state in India at all dimensions in the inaugural national Multi-dimensional Poverty Index (MPI) released by NITI Aayog?
A) Andhra Pradesh
B) Uttar Pradesh
C) Bihar
D) Punjab
5. The joint Armed Force Exercise Dakshin Shakti 2021 was held in which place recently?
A) Pithoragarh
B) Jaisalmer
C) Agra
D) Pune
6. RBI has recently imposed Rs 1 crore penalty on the State Bank of India for violating norms related to holding shares of amount exceeding 30 percent of the paid-up share capital of the companies as stated in subsection (2) of section ______of the Banking Regulation Act defines this rule?
A) Section 19
B) Section 21
C) Section 15
D) Section 28
7. Sananta Tanty who has passed away recently was a Sahitya Akademi Award-winning Indian poet of which literature?
A) Malayalam
B) Marathi
C) Bengali
D) Assamese
8. INS Vela has been commissioned at which place by the Indian Navy?
A) Goa Shipyard Limited
B) Naval Dockyard Mumbai
C) Hindustan Shipyard Limited, Visakhapatnam
D) Jawaharlal Nehru Port Trust
9. Name the Indian candidate who has recently been elected as ‘Delegate for Asia’ on the executive committee of the INTERPOL?
A) Praveen Sinha
B) Srinivasan Doraiswamy
C) Anand Mahto
D) Ramani Bharadwaj
10. Which state in India has approved the proposal to launch the first Cyber Tehsils?
A) Gujarat
B) Uttarakhand
C) Madhya Pradesh
D) Rajasthan
11. The world’s first multimodal brain imaging data and analytics has been developed at DBT-National Brain Research Center in which state of India?
A) Pune
B) Mumbai
C) Haryana
D) Kerala
12. Which of the following ministry has recently organized a three-day International Tourism Mart in Kohima, Nagaland?
A) Ministry of Tribals
B) Ministry of Tourism
C) Ministry of Transport
D) Ministry of Culture
13. Which of the following ministry has recently released a new series of Wage Rate Index with base year 2016?
A) Ministry of Tribals
B) Ministry of Sports
C) Ministry of Education
D) Ministry of Labor
14. According to the recently released figures, the total debt and liabilities of Pakistan has exceeded how many Trillion Pakistani rupees?
A) 50.5 Trillion
B) 70.5 Trillion
C) 80.5 Trillion
D) 95.5 Trillion
15. For which scheme has the Government of India recently allocated more than Rs 10000 crore?
A) self-reliant India plan
B) Curiosity Plan
C) ownership plan
D) MNREGA Scheme
16. Supporting India against climate change, which country has recently announced 1.2 billion euros for India’s aid?
A) UK
B) England
C) Austria
D) Germany

1. A
The cap on promoters’ stake in long run of 15 years has been raised from 15 percent (earlier) to 26 percent of the paid-up voting equity share capital of the bank.
2. D
Ahmed Nasser Al Raisi of the United Arab Emirates (UAE) has been elected as the new President of INTERPOL (Headquarters: Lyon, France).
3. A
The initial paid-up voting equity share capital/ net worth required to set up a new universal bank has been increased to ₹1000 crore (from present ₹500 crore).
4. C
The government think tank Niti Aayog has released the first ever Multi-dimensional Poverty Index (MPI) to measure poverty at the national, State/UT, and district levels. As per the inaugural index, Bihar has been adjudged as the state with highest level of multidimensional poverty. 51.91 percent of the state’s population are multidimensionally poor.
5. B
The Indian Army had organised the biggest military exercise called Dakshin Shakti in Rajasthan’s Jaisalmer from November 19 to 22, 2021. Exercise Dakshin Shakti witnessed the participation of over 30,000 troops from the Army, Navy, IAF, Coast Guard, BSF and intelligence.
6. A
The Reserve Bank of India (RBI) has imposed a monetary penalty of Rs 1 crore on State Bank of India (SBI) on November 26, 2021, for violating sub-section (2) of section 19 of the Banking Regulation Act, 1949. SBI held shares in the borrower companies of an amount exceeding 30 percent of the paid-up share capital of those companies.
7. D
Sahitya Akademi Award-winning Indian poet of Assamese literature Sananta Tanty has passed away after a prolonged illness. He was 69.
8. B
The Indian Navy formally commissioned the fourth Scorpene-class submarine INS Vela at the Naval Dockyard in Mumbai on November 25, 2021. INS Vela is the fourth in the series of six submarines being developed under the Kalvari-class submarine Project-75.
9. A
The Central Bureau of Investigation (CBI) Special Director Praveen Sinha has been elected as ‘Delegate for Asia’ on the executive committee of the International Criminal Police Organization (Interpol).
10. C
The Madhya Pradesh Cabinet has approved the proposal to create Cyber Tehsils. Madhya Pradesh will be the first state in India to create Cyber Tehsil.
11. C
World’s first multimodal brain imaging data and analytics developed project indigenously developed at DBT-National Brain Research Center in Haryana State. Which is a unique brain initiative. It focuses on proven neuroimaging, neurochemical, neuropsychological data and analytics made accessible to researchers for the management of brain disorders.
12. B
Ministry of Tourism has recently organized a three-day International Tourism Mart in Kohima, Nagaland. Which will highlight the tourism potential of the region in domestic and international markets. This International Tourism Mart is attended by student delegations from across the country as part of a study tour under Ek Bharat Shreshtha Bharat.
13. D
Ministry of Labor has recently released a new series of Wage Rate Index with base year 2016. The new series of WRI with base 2016=100 is going to replace the old series with base 1963-65. While the new WRI series will be compiled twice a year.
14. A
According to the recently released data, the total debt and liabilities of Pakistan has exceeded 50.5 Trillion Pakistani rupees. Out of which the loan addition of PKR 20.7 Trillion is under the present government alone. Recently State Bank of Pakistan has released the loan figures till September 2021.
15. D
The Government of India has recently allocated more than Rs 10000 crore for MNREGA scheme. This Mahatma Gandhi National Rural Employment Guarantee Scheme (MNREGA) is a demand based scheme. While at the same time more than Rs 68,568 crore has been released to implement this scheme in the states and union territories.
16. D
Supporting India against climate change, recently Germany has announced 1.2 billion euros for India’s aid. Which will also be used for cooperation on clean energy. While both India and Germany are working together for energy, sustainable urban development, management of natural resources and agriculture, and health and social security.