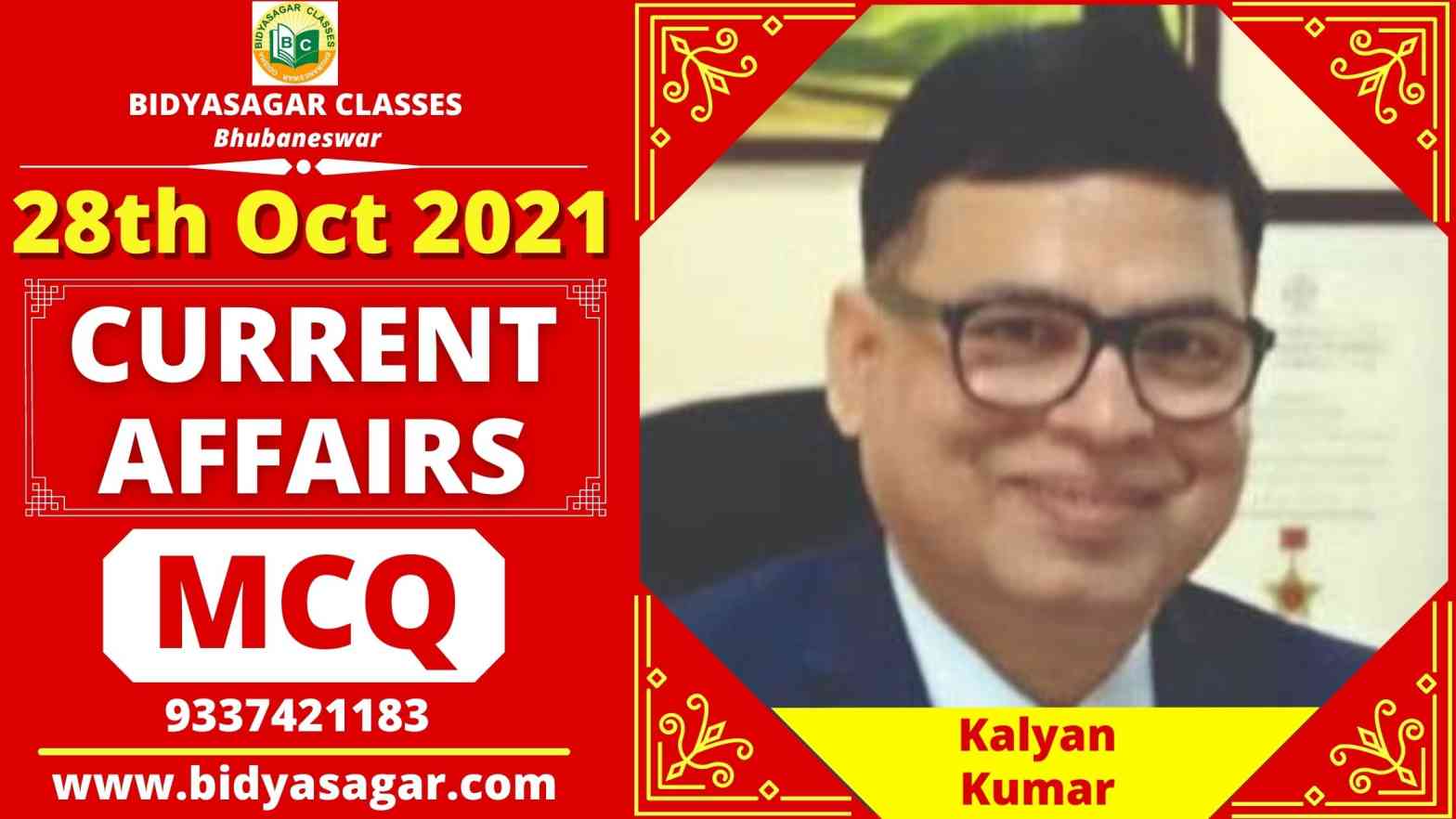 In this article, we will discuss MCQ on important current affairs of 278h October 2021 and their answers with explanations.

1. Prime Minister Narendra Modi attended the 16th East Asia Summit (EAS) virtually on October 27, 2021. The Summit was hosted under the Chairperson of which country?
A) Bahrain
B) Brunei
C) Malaysia
D) Singapore
2. Government of India has planned to set up two container-based mobile hospitals under the PM Ayushman Bharat Health Infrastructure Mission. The hospital will be set up in which cities?
A) Hyderabad and Pune
B) Mumbai and Delhi
C) Delhi and Chennai
D) Bengaluru and Ahmedabad
3. The Green Day Ahead Market (GDAM) is a new market segment launched by which ministry?
A) Ministry of Road Transport and Highways
B) Ministry of New and Renewable Energy
C) Ministry of Petroleum and Natural Gas
D) Ministry of Rural Development
4. The Nag River revitalization project, approved by Expenditure Finance Committee, has been launched for which city?
A) Nagpur
B) New Delhi
C) Chennai
D) Lucknow
5. Which ministry has launched the e-National Level Awareness Programme ‘SAMBHAV”?
A) Ministry of Social Justice and Empowerment
B) Ministry of Women and Child Development
C) Ministry of Food Processing Industries
D) Ministry of Micro, Small & Medium Enterprises (MSME)
6. When is the International Animation Day observed annually?
A) 25 October
B) 28 October
C) 26 October
D) 27 October
7. DRDO recently test fired long range nuclear capable ballistic missile ‘Agni-5’. The new missile falls under which category?
A) surface-to-air
B) air-to-surface
C) surface-to-surface
D) air-to-air
8. Which financial institution has inked $251-million loan agreement with India for Integrated Urban Flood Management in Chennai?
A) Asian Development Bank
B) Asian Infrastructure Investment Bank
C) World Bank
D) United Nations Development Programme
9. The AI Innovate initiative has been launched by which entity to support startup ecosystem in India?
A) Google
B) Microsoft
C) Facebook
D) NPCI
10. CCI has approved the acquisition of stake in HDFC ERGO General Insurance Company by HDFC Bank. What percent of stake will be acquired by the bank in the insurance firm?
A) 5.11%
B) 3.55%
C) 4.99%
D) 5.22%
11. Who is the author of the biography ‘Kamala Harris: Phenomenal Woman’?
A) Sunjeev Sahota
B) Mahmood Mamdani
C) Megha Rajagopalan
D) Chidanand Rajghatta
12. The Indian Army is celebrating which edition of the Infantry Day in 2021?
A) 72nd
B) 75th
C) 79th
D) 77th
13. National Sports Award Committee has proposed the names of how many Players including Neeraj Chopra for Major Dhyan Chand Khel Ratna Award 2021?
A) 5 Players
B) 7 Players
C) 9 Players
D) 11 Players
14. Which of the following space agency has recently detected a planet outside our galaxy for the first time?
A) Space X
B) ESA
C) NASA
D) ISRO
15. Kalyan Kumar has been appointed as the new executive director of which bank recently?
A) State Bank Of India
B) Canara Bank
C) Yes Bank
D) Punjab National Bank
16. In association with which of the following company, National Skill Development Corporation has launched Skill India Impact Bond?
A) Google
B) Microsoft
C) Facebook
D) British Asian Trust
17. Prime Minister Narendra Modi has recently launched “Ayushman Bharat Health Infrastructure Mission” in which city of Uttar Pradesh?
A) Lucknow
B) Kanpur
C) Varanasi
D) Hamirpur

1. B
Prime Minister Narendra Modi participated in the 16th East Asia Summit (EAS) through video conference on October 27, 2021, during which he re-affirmed India’s focus on a free, open and inclusive Indo-Pacific and the principle of ASEAN Centrality in the region. The 16th EAS was hosted under the Chairmanship of Brunei.
2. C
The Union Health Minister Mansukh Mandaviya has announced that up two container-based mobile hospitals with all healthcare facilities is planned to be set up under the PM Ayushman Bharat Health Infrastructure Mission. The hospital will be first of its kind in Asia. The unique feature of the hospitals will be that they can be rushed to any place, by rail or air to address a health emergency. The two hospitals will be placed in Delhi and Chennai.
3. B
The Union Minister of Power & New and Renewable Energy, Shri R K Singh, launched a new market segment, “Green Day Ahead Market (GDAM)” on October 25, 2021. This makes India as the only large electricity market in the world to implement a GDAM exclusively for renewable energy.
4. A
The Expenditure Finance Committee (EFC) of Department of Expenditure, under Ministry Of Finance has approved the Nag River revitalization project. The project was conceptualised by Union Minister for Road Transport and Highways Nitin Gadkari for Nagpur in Maharashtra. The Rs 2,117 crore ambitious project includes construction of three STP projects, a 500-kilometer sewerage network, a pumping station and community toilets.
5. D
The Ministry of Micro, Small & Medium Enterprises (MSME) has launched an e-National Level Awareness Programme ‘SAMBHAV”, to promote engagement of the youth in promoting entrepreneurship. The e-National Level Awareness Programme 2021 ‘SAMBHAV” was launched by Union Minister of MSME Shri Narayan Rane in New Delhi on October 27, 2021.
6. B
The International Animation Day is observed every year on October 28 to celebrate the art of animation and also recognise the artists, scientists and technicians behind animation. The day was created in 2002 by ASIFA, an International Animated Film Association, a member of UNESCO.
7. C
The Defence Research and Development Organisation (DRDO) carried successful test-firing of surface-to-surface ballistic missile Agni-5 on October 27, 2021 from APJ Abdul Kalam Island in Odisha.
8. A
The Government of India and Asian Development Bank (ADB) have signed $251-million loan for climate-resilient, integrated urban flood protection and management in the Chennai–Kosasthalaiyar basin to strengthen the resilience of Chennai city to floods.
9. B
Microsoft has announced the launch of a new program to support the startup ecosystem in India. The“Microsoft AI Innovate” is a 10-week initiative that will support startups in India that are leveraging Artificial Intelligence (AI), to scale operations, drive innovation, and build industry expertise.
10. C
The Competition Commission of India (CCI) has approved the acquisition of 4.99 percent of the outstanding equity share capital in HDFC ERGO General Insurance Company by private sector lender HDFC Bank. HDFC Bank will acquire 3.56 crore shares or 4.99% stake for Rs 1,906 crore from the parent company Housing Development Finance Corporation (HDFC).
11. D
US-based Indian journalist and author Chidanand Rajghatta has come out with the biography of US Vice President Kamala Harris titled “Kamala Harris: Phenomenal Woman”.The biography has been published by HarperCollins Publishers India.
12. B
Every year, October 27 is celebrated as Infantry Day by the Indian Army across the country, to honour the supreme sacrifice of the gallant soldiers in fighting the Pakistani invaders, in Jammu and Kashmir, in 1947. October 27, 2021 marks the 75th Infantry Day on October 27, 2021.
13. D
The National Sports Award Committee has recently proposed the names of 11 Players including Gold Medalist Javelin Thrower Neeraj Chopra for Major Dhyan Chand Khel Ratna Award 2021. In which 5 para athletes are also included, while last year 5 Players were selected for the Khel Ratna Award.
14. C
Answer:- NASA – The US space agency NASA has recently detected a planet outside our galaxy for the first time. While about 5000 extraterrestrials have been discovered so far. But they were all in the interior of our Milky Way galaxy. These extraterrestrials revolve around our own Sun.
15. D
Kalyan Kumar has recently been appointed as the new Executive Director of Punjab National Bank. Punjab National Bank is a major and old bank of the country, which is a scheduled bank.
16. D
National Skill Development Corporation has recently floated the first and largest of its kind “Skill India Impact Bond” for skill development in India in collaboration with global partners in association with British Asian Trust. “Launched. Which includes a fund of 14.4 million US dollars.
17. C
Prime Minister Narendra Modi has recently launched Rs 5000 crore “Ayushman Bharat Health Infrastructure Mission” in Varanasi, Uttar Pradesh. This is India’s biggest scheme launched to increase health infrastructure. Also, 11,024 urban health and wellness centers will be set up under this scheme.