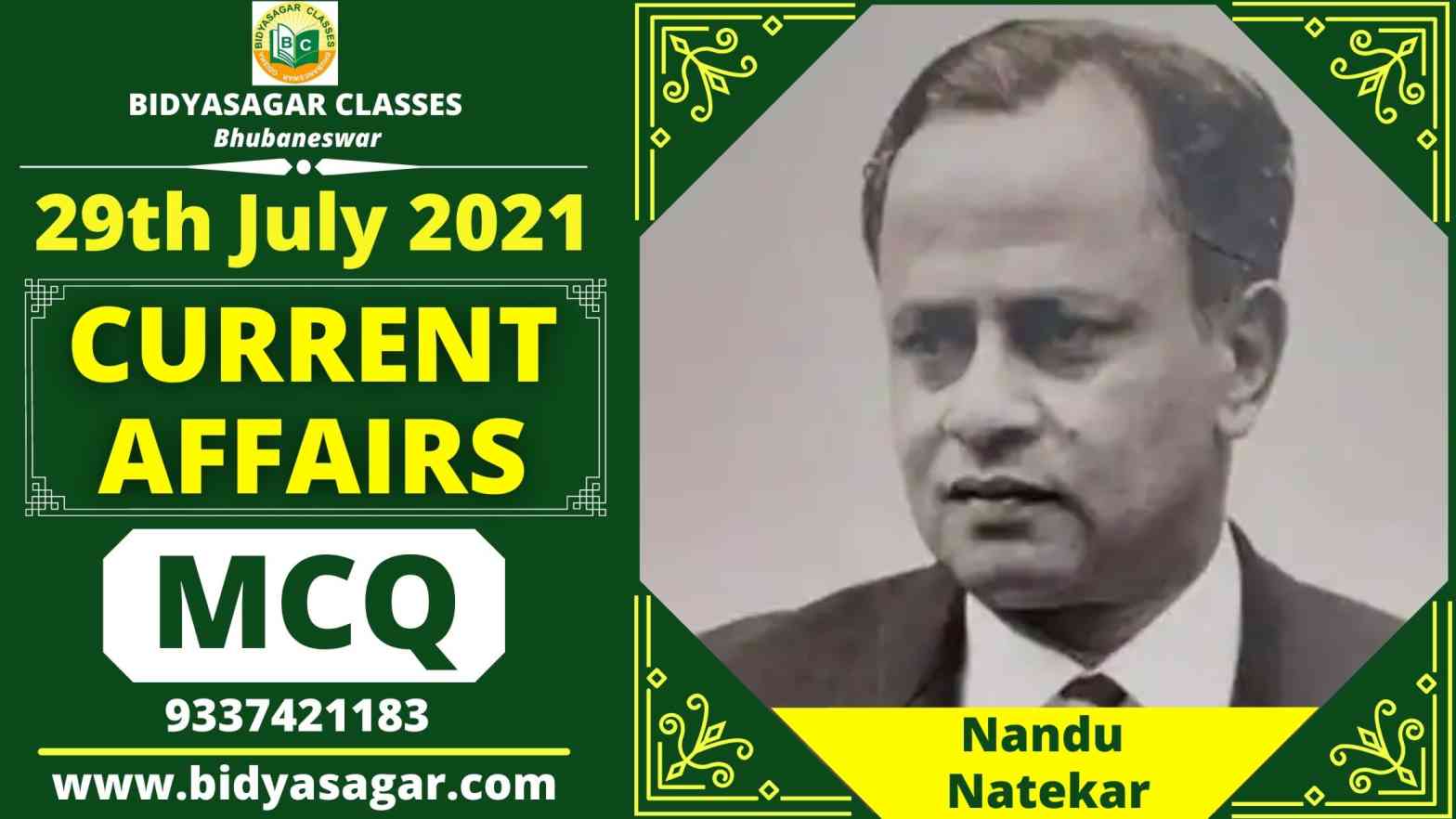 In this article, we will discuss MCQ on important current affairs of 29th July 2021 and their answers with explanations.

1. The International Tiger Day falls on which day of the year annually?
A) Last Monday of July
B) 28 July
C) Last Sunday of July
D) 29 July
2. Which Indian city is the only one from the country to be chosen for the International Clean Air Catalyst Programme of USAID?
A) Ahmedabad
B) Pune
C) Indore
D) Mumbai
3. Which state has launched the Ayush-based economic upgradation scheme named Devaranya Yojana to boost livelihood opportunities in tribal areas?
A) Madhya Pradesh
B) Telangana
C) Uttarakhand
D) Haryana
4. Name the first Indian city to fully implement safe drinking water from tap facility?
A) Hyderabad
B) Puri
C) Indore
D) Surat
5. Who among these has been sworn in as the Delhi Police Commissioner recently?
A) Subodh Kumar Jaiswal
B) Mannem Nageswara Rao
C) Rishi Kumar Shukla
D) Rakesh Asthana
6. One of India’s legendary sportsperson, Nandu Natekar, has passed away at the age of 88. He was associated with which game?
A) Badminton
B) Hockey
C) Volleyball
D) Football
7. The Sitio Burle Marx has been inscribed as the UNESCO World Heritage site on July 27, 2021. The site is based in which country?
A) France
B) Brazil
C) United Kingdom
D) Germany
8. What is the theme of the 2021 International Tiger Day?
A) Fresh Ecology For Tigers’ Protection.
B) Connect2Tiger
C) Their Survival is in our hands
D) Save Tigers Now
9. The Union Cabinet has approved the DICJEC Amendment Bill, under which now how much amount of customers will be safe if the bank sinks?
A. Rs 2 Lakh
B. Rs 3 Lakh
C. Rs 4 Lakh
D. Rs 5 Lakh
10. Governor Thawar Chand Gehlot has sworn in Basavaraj Bommai as the new Chief Minister of which state?
A. Uttarakhand
B. West Bengal
C. Karnataka
D. Gujarat
11. Gujarat cadre IPS officer Rakesh Asthana has been made the new police commissioner of which city?
A. Mumbai
B. Delhi
C. Kolkata
D. Pune
12. Which House of Parliament has recently passed the Factoring Regulation Amendment Bill 2021 amid opposition from the opposition?
A. Rajya Sabha
B. Lok Sabha
C. NITI Aayog
D. Planning Commission
13. Which day is celebrated all over India on 29th July?
A. Mohun Bagan Day
B. National Science Day
C. National Knowledge Day
D. National Post Day
14. Recently who has approved the first ever proposal on vision?
A. Central Government
B. United Nations
C. UNESCO
D. NITI Aayog
15. Which parent company of Google has announced the launch of a new robotics company “Intrinsic”?
A. Youtube
B. Alphabet
C. Fitbit
D. Waymo
16. Which medal has India’s Priya Malik won in the World Cadet Wrestling Championship held in Hungary?
A. Gold Medal
B. Silver Medal
C. Bronze Medal
D. Aluminum Medal
17. A joint military exercise between India and which country will be organized in Volgograd from August 1 to 13?
A. Japan
B. China
C. America
D. Russia
18. Raksha Mantri Rajnath Singh to attend SCO Defence Ministers’ meeting in ______.
(a) Kyrgyzstan
(b) China
(c) Afghanistan
(d) Tajikistan
19. The Reserve Bank of India is currently working on a phased implementation strategy for its own digital currency named “CBDC”. What is the full of CBDC?
(a) Central Business Digital Currency
(b) Central Bureau Digital Currency
(c) Central Bank Digital Currency
(d) Central Broker Digital Currency
20. Which of the following state government made the ‘Devaranya’ scheme to promote Ayurveda?
(a) Uttarakhand
(b) Tamil Nadu
(c) Gujarat
(d) Madhya Pradesh

1. D
International Tiger Day ( also called Global Tiger Day) is celebrated every year on July 29 to raise awareness for tiger conservation.
2. C
The Indore city of Madhya Pradesh, or the cleanest city of India, has become the only city from the country to be selected for International Clean Air Catalyst Programme.
3. A
The State Government of Madhya Pradesh has prepared an Ayush-based economic upgradation scheme named Devaranya Yojana, to bring together AYUSH and tourism to boost employment opportunities in tribal areas.
4. B
Puri, in Odisha has become the first city in India to implement Drink-from-Tap project. The city now offers safe drinking water directly from the tap on 24 hours basis, through a smart water management technology.
5. D
Border Security Force (BSF) Director General (DG), Rakesh Asthana has been appointed as the Delhi Police Commissioner on July 27, 2021, with immediate effect..
6. A
Legendary Indian badminton player Nandu Natekar, who became the first Indian to win the international title in 1956, has passed away, suffering from age-related ailments. He was 88.
7. B
The Sitio Burle Marx site, a landscape garden in Brazilian city Rio de Janeiro has been added to UNESCO’s list of World Heritage sites.
8. C
The theme/Slogan for 2021 International Tiger Day celebration is “Their Survival is in our hands”.
9. D
The Union Cabinet has recently approved the Deposit Insurance and Credit Guarantee Corporation Act (DICJEC) Amendment Bill, under which now any bank will be liable to customers in case of sinking or closure. 5 Lakh rupees will be safe. Depositors will get this amount within 90 days. Only this amendment bill is yet to get the approval of the Parliament.
10. C
The Governor of Karnataka, Thaawar Chand Gehlot has recently administered the oath of Basavaraj Bommai as the new Chief Minister of Karnataka. Bommai’s name was proposed after the resignation of former Chief Minister BS Yediyurappa. Born in the year 1960, Basavaraj Somappa Bommai was also the Minister of Home, Law, Parliamentary Affairs of Karnataka before assuming the chair of Chief Minister.
11. B
IPS officer of Gujarat cadre Rakesh Asthana, who was posted as Director General of Border Security Force, has recently been made the new Police Commissioner of Delhi. Also, ITBP Director General Surjit Singh Deswal has been given additional charge of BSF. At present 80 thousand jawans are deployed in Delhi Police.
12. B
The House of Parliament has recently passed the Factoring Regulation Amendment Bill 2021 amidst the opposition’s opposition. The objective of which is to liberalize the Factoring Regulation Act, 2011 by increasing the scope of entities engaged in factoring business. Now this bill will be introduced in Rajya Sabha for consideration.
13. A
On 29th July, Mohun Bagan Day is celebrated all over India. This 131-year-old 1911 club became the only Indian club to win the prestigious IFA Shield tournament on this day. Actually, on this day 109 years ago, Mohun Bagan defeated the East Yorkshire Regiment in the IFA Shield final.
14. B
The United Nations General Assembly has recently approved the first ever resolution on vision. It aims to help about 1.1 billion people who suffer from vision loss by 2030. Along with this, the United Nations has asked its 193 member countries to ensure the care of the eyes of each of their citizens.
15. B
Google’s parent company Alphabet has recently announced the launch of a new robotics company “Intrinsic”. Which will focus on developing software for robots. This is done after years of working within “X”, a subsidiary of the intrinsic company Alphabet.
16. A
Priya Malik of India has won the gold medal in the 73 kg weight category in the World Cadet Wrestling Championship held in Hungary. She won this medal after defeating Ksenia Patapovich of Hungary in the final match. In the year 2019, he also won the gold medal in the Khelo India Games held in Pune.
17. D
Joint military exercise “Indra-2021” will be organized between India and Russia from 1 to 13 August in Volgograd. This joint military exercise will further strengthen and develop the bilateral security cooperation of the two countries. 250 personnel of both the countries will participate in this military exercise. This exercise will enhance the interoperability and mutual trust between the armies of the two countries.
18. D
Raksha Mantri Rajnath Singh is on a three-day visit to Dushanbe, Tajikistan from July 27-29, 2021 to attend the annual meeting of the Defence Ministers of Shanghai Cooperation Organisation (SCO) member states.
19. C
The Reserve Bank of India is currently working on a phased implementation strategy for its own digital currency, Central Bank Digital Currency (CBDC), and will launch it in the wholesale and retail segments soon.
20. D
The International Monetary Fund (IMF) has sharply cut India’s economic growth projection by 300 basis points, from 12.5 per cent to 9.5 per cent for the financial year 2021-22 (FY22).