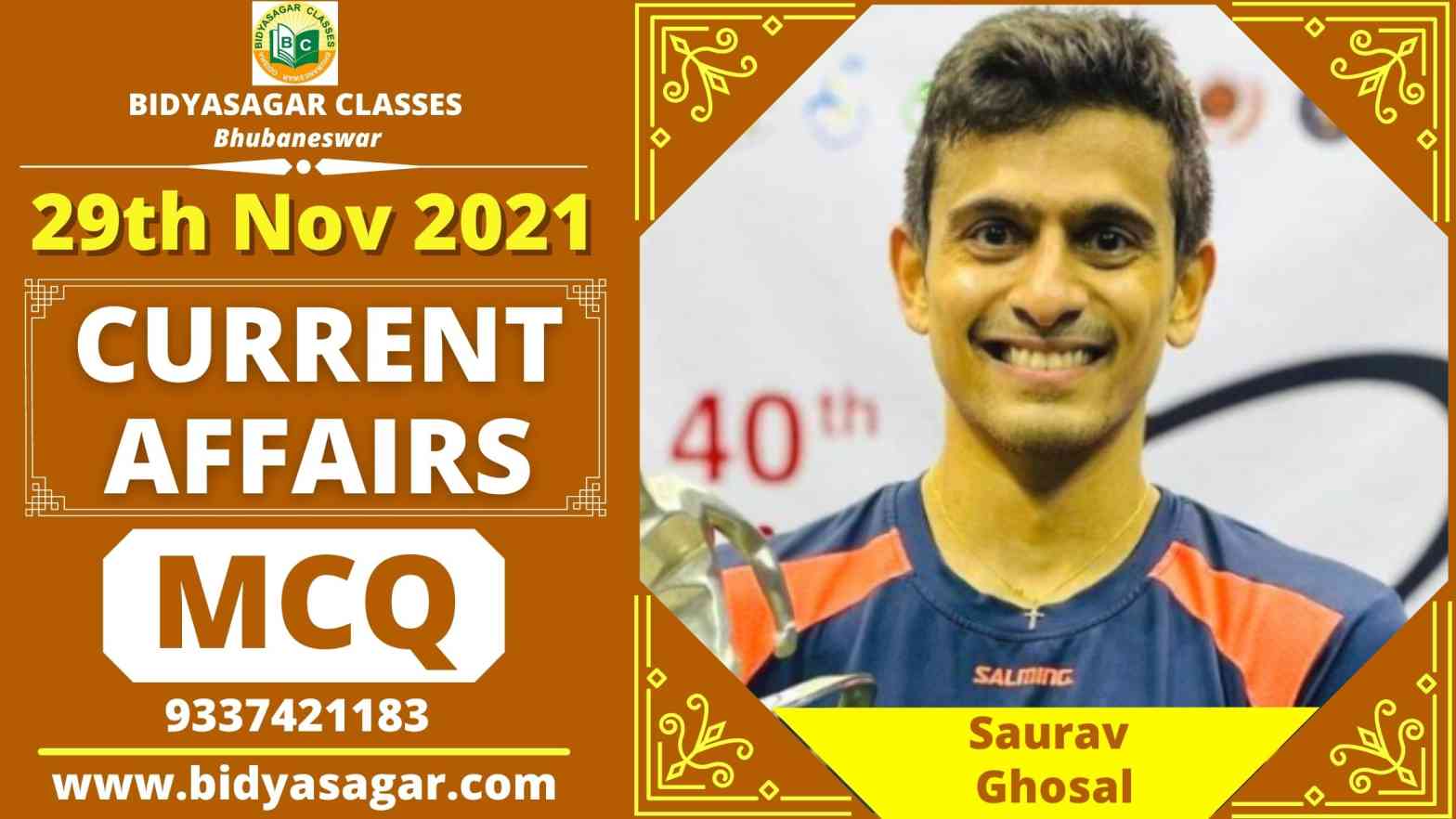 In this article, we will discuss MCQ on important current affairs of 29th November 2021 and their answers with explanations.

1. Matilda Kullu, a tribal woman and ASHA worker from which state of India has been included in the Forbes list of the most powerful women in the world?
A) Gujarat
B) Maharashtra
C) Punjab
D) Odisha
2. Ahmed Nasir Al Raisi of UAE has been appointed as the new chief of which police organization?
A) CBI
B) Narco Department
C) Interpol
D) SRB
3. Which of the following organizations has recently designated COVID-19 variant B.1.1529 as “of concern”?
A) Policy Organization
B) world bank
C) UNESCO
D) World Health Organization
4. Name the Minister of State for AYUSH, who has recently inaugurated the three day program ‘Ayurved Parv-2021’?
A) Piyush Goyal
B) Hardeep Singh Puri
C) Ajay Singh
D) Munjpara Mahedrabhai
5. Delhi government has recently announced the addition of Kartarpur Sahib in Pakistan and “Velankanni Church” located in which state in the “Mukhyamantri Teerth Yatra Yojana”?
A) Mumbai
B) Kerala
C) Gujarat
D) Tamil Nadu
6. Who among the following has recently published its report on “Multidimensional Poverty Index” of India?
A) Planning Commission
B) NITI Aayog
C) Education Commission
D) Labor Commission
7. When is the “International Day of Solidarity with the Palestinian People” observed?
A) 28 November
B) 29 November
C) 30 November
D) December 2
8. At which place did a group of companies working in the field of tourism safely land the Airbus A-340 for the first time?
A) Austria
B) Australia
C) Antarctica
D) Pacific Ocean
9. The data in the 5th National Family Health Survey (NFHS) has shown an increase in the number of women per men. The ratio of women to men is recorded at which of the following
A) 1025:1000
B) 1015:1000
C) 1020:1000
D) 1030:1000
10. Who is the head of the 5 member panel constituted by the Centre to oversee timely implementation of various projects under the Central Vista Redevelopment Plan?
A) Ratan P Watal
B) Ramesha Chandra
C) V K Saraswat
D) Rajiv Kumar
11. The Indian Railways is setting up the tallest pier railway bridge of the world in which state of the country?
A) Uttarakhand
B) Tamil Nadu
C) Gujarat
D) Manipur
12. Who has been appointed as the new Chairman of the Central Board of Indirect Taxes and Customs (CBIC)?
A) Om Prakash Dadhich
B) Vivek Johri
C) Sandeep Kumar
D) Sungita Sharma
13. The India International Science Festival (IISF) in 2021 will be held in which state?
A) Goa
B) Delhi
C) West Bengal
D) Kerala
14. Name the winner of the International Press Institute (IPI) India Award for Excellence in Journalism for 2021?
A) Lakshmi Subramanian and Bhanu Praksh Chandra
B) Sreenivasan Jain and Mariyam Alavi
C) Jointly by A & B
D) No award given in 2021
15. Which player has won the men’s single title at 2021 Malaysian Open Squash Championships?
A) Harinder Pal Sandhu
B) Ramit Tandon
C) Mahesh Mangaonkar
D) Saurav Ghosal
16. The National Cadet Corps (NCC) observed its which anniversary of raising day on November 28, 2021?
A) 70th
B) 73rd
C) 77th
D) 75th

1. D
Matilda Kullu, a 45-year-old tribal woman and ASHA worker from the state of Odisha, has been included in the Forbes list of the most powerful women in the world. He has put an end to the social curse like black magic in Gargadbahal village of Baragaon tehsil of Kullu Sundergarh district.
2. C
Ahmed Nasir Al Raisi of UAE has been recently appointed as the new Chief of International Criminal Police Organization (Interpol) for four years. Nasser has been elected Interpol President at a meeting of 140 member countries of Interpol in Istanbul, Turkey.
3. D
The World Health Organization has recently designated the Kovid-19 variant B.1.1529 as “of concern”. Which is named “Omicron”. This variant was first detected in the Botswana region of South Africa. The newly discovered variant contains a large number of mutations.
4. D
Minister of State for AYUSH Munjpara Mahedrabhai has recently inaugurated the Ayurveda Parv-2021 three-day program in New Delhi. Whose aim is to promote Ayurveda. In addition to the participation of pharmaceutical companies, an exhibition with 40 stalls has been organized as part of this event.
5. D
The Delhi government has recently announced the addition of Kartarpur Sahib in Pakistan and “Velankanni Church” in Tamil Nadu in the “Chief Minister’s Pilgrimage Scheme”. The first batch of senior citizens will go on a free pilgrimage to Kartarpur Sahib on January 5 and the first batch of pilgrims to Velankanni Church on January 7.
6. B
NITI Aayog recently prepared its report on “Multidimensional Poverty Index” of India for 2015-16 on the basis of National Family Health Survey. The report is published. According to which, in the year 2015-16, one out of every four people in India was multidimensionally poor. It states that, 25.01 percent of the population was multidimensionally poor.
7. B
November 29, “International Day of Solidarity with the Palestinian People” is celebrated by the United Nations around the world. The day commemorates the anniversary of Resolution 181, in which the General Assembly adopted the resolution on the Partition of Palestine on November 29, 1947.
8. C
A group of companies working in the field of tourism has recently landed the Airbus A-340 safely for the first time over Antarctica. This has been done by an aviation company named Hi Fly. The runway has been built on ice in Antarctica, which is 3000 feet long. Between 2019 and 2020, about 6 trials were conducted here before landing the 223 feet long aircraft with 290 passenger capacity.
9. A
The fifth edition of the National Family Health Survey (NFHS) released by the Ministry of Health and Family Welfare (MoHFW) shows the signs of a demographic shift in India. The NFHS-5 showed that the proportion of women exceeded men. There were 1,020 women for 1,000 men as per NFHS-5 report.
10. D
The Ministry of Housing and Urban Affairs has formed a five-member committee for timely completion of various projects executed under the Central Vista Redevelopment Plan. The committee will be headed by former finance secretary Ratan P Watal.
11. B
The Indian Railways is constructing the tallest pier railway bridge of the world in Manipur. The bridge is being built at a height of 141 metres.
12. A
Senior bureaucrat Vivek Johri has been appointed as the new Chairman of the Central Board of Indirect Taxes and Customs (CBIC).
13. D
The 7th edition of the four-day India International Science Festival (IISF) is scheduled to be held in Panaji, Goa, from December 10 to 13, 2021. The festival theme in 2021 is `Celebrating Creativity in Science, Technology and Innovation for Prosperous India’.
14. D
The International Press Institute (IPI) India Award for Excellence in Journalism 2021 has been awarded jointly to Sreenivasan Jain and Mariyam Alavi of NDTV, and Lakshmi Subramanian and Bhanu Praksh Chandra of The Week.
15. B
Indian Squash star Saurav Ghosal has scripted history as he has become the first Indian squash player to win the Malaysian Open Championships.
16. B
The youth wing of the Indian Armed Forces, National Cadet Corps (NCC) celebrated its 73rd Raising Day on November 28, 2021. NCC observes its Raising Day on the Fourth Sunday in November every year.