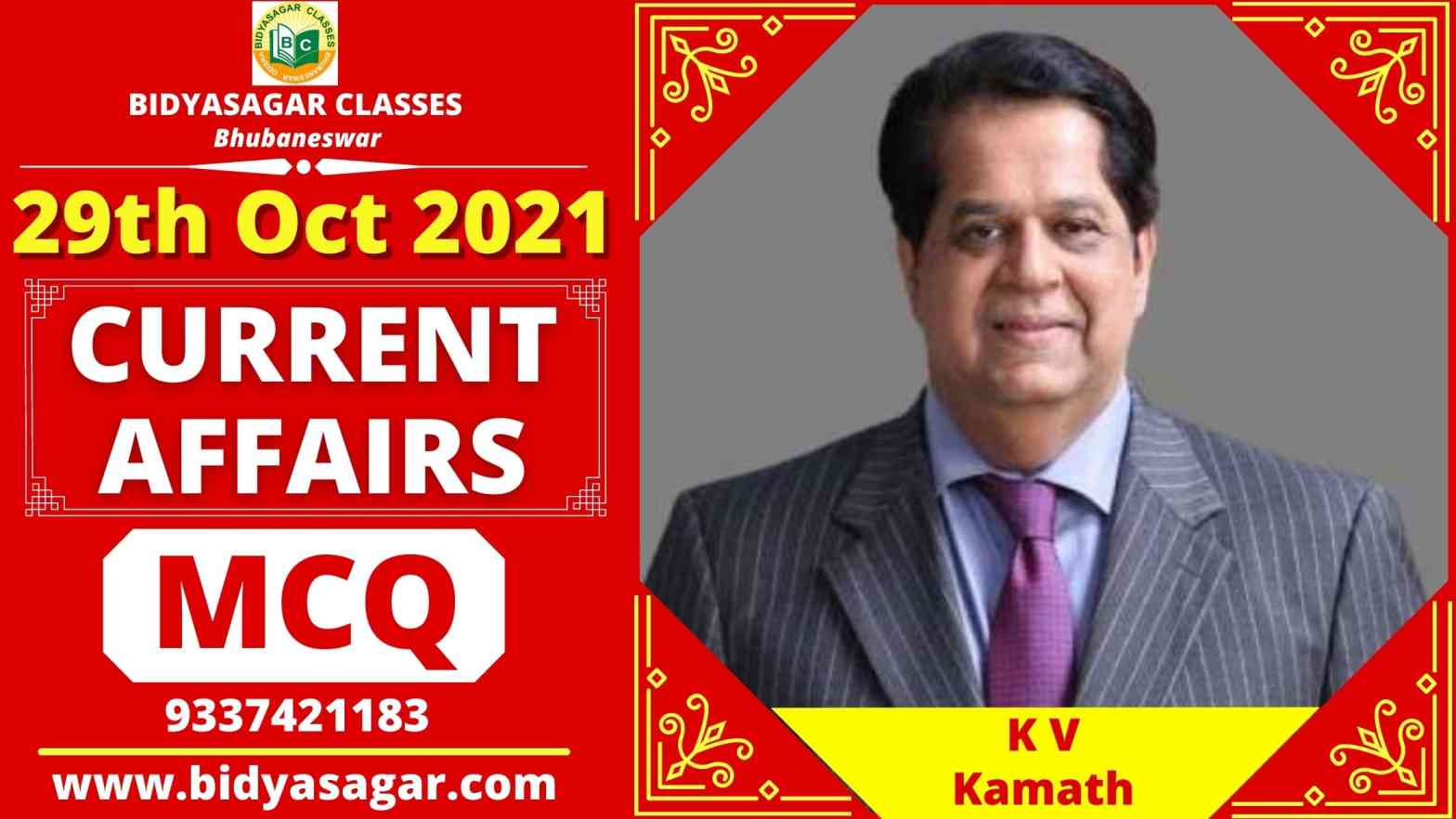 In this article, we will discuss MCQ on important current affairs of 29th October 2021 and their answers with explanations.

1. Who has been appointed as the Chairperson of the Economic Advisory Council to the PM (EAC-PM)?
A) Arvind Subramanian
B) Kaushik Basu
C) Viral Acharya
D) Bibek Debroy
2. PM Narendra Modi attended which edition of the annual ASEAN-India Summit in 2021?
A) 20th
B) 18th
C) 15th
D) 12th
3. The International Internet Day is marked every year on which day?
A) October 26
B) October 27
C) October 29
D) October 28
4. Who has been appointed as the Managing Director and CEO of J&K Bank by RBI?
A) Baldev Prakash
B) Rajeev Lochan Bishnoi
C) Atal Dulloo
D) Nitishwar Kumar
5. Shavkat Mirziyoyev has been re-appointed as the president of which country for second straight term?
A) Vietnam
B) Ukraine
C) Azerbaijan
D) Uzbekistan
6. The Syracuse 4A is a military communication satellite launched by which country in the orbit?
A) South Korea
B) France
C) Israel
D) Singapore
7. Who has been appointed as the Chairperson of the National Bank for Financing Infrastructure and Development (NaBFID)?
A) Aditya Puri
B) Kris Gopalakrishnan
C) K V Kamath
D) Nandan Nilekani
8. ICGS Sarthak is the new Offshore Patrol Vessels dedicated to the nation to boost maritime safety and security of India. The OPV has been developed by which company?
A) Goa Shipyard Limited
B) Hindustan Shipyard
C) Mazagon Dock Shipbuilders
D) Garden Reach Shipbuilders & Engineers
9. World Psoriasis Day is an annual observation held on which of these days every year?
A) 28 October
B) 27 October
C) 29 October
D) 26 October
10. Which state has launched the ‘Go-Green’ scheme to provide electric two-wheelers at subsidised rates to construction and industrial workers?
A) Uttar Pradesh
B) Madhya Pradesh
C) Rajasthan
D) Gujarat
11. The inaugural session of the Asia Health 2021 Summit was addressed by Union Minister for Health and Family Welfare, Dr. Mansukh Mandaviya. The Summit was organised by which organisation?
A) NASSCOM
B) Confederation of Indian Industry
C) FICCI
D) ASSOCHAM
12. Anita Anand is an Indian-origin politician who has been appointed as the Defence Minister of which country?
A) Mexico
B) Australia
C) Germany
D) Canada
13. How many members are there in the Economic Advisory Council to the PM (EAC-PM)?
A) 11
B) 7
C) 5
D) 9
14. Which country is the Chair for the 2021 ASEAN-India Summit?
A) Brunei
B) Indonesia
C) Thailand
D) Philippines
15. What is the authorised capital of National Bank for Financing Infrastructure and Development (NaBFID)?
A) Rs 75,000 crore
B) Rs 2 lakh crore
C) Rs 1 lakh crore
D) Rs 90,000 crore
16. Which mega vaccination campaign has recently been announced by the central government to start against the corona virus from next month?
A) State Campaign
B) Safety and Vaccine Rescue Campaign
C) Har Ghar Dastak Campaign
D) Har Ghar Vaccination Campaign
17. The Strategic Forces Command of the Indian Army has recently conducted the first successful user test of which ballistic missile?
A) Prithvi V
B) Samundr V
C) Vidhvansk V
D) Agni V
18. Which state of India has become the first open defecation free state recently?
A) Kerala
B) Gujarat
C) Madhya Pradesh
D) Goa
19. Which railway station has recently been renamed as “Ayodhya Cantt” by the Uttar Pradesh government?
A) Jhansi Railway Station
B) Kanpur Railway Station
C) Faizabad Railway Station
D) Gwalior Railway Station
20. “Healthy Women, Healthy Goa” initiative has been launched by which of the following foundation?
A) Unicorn Foundation
B) Moody’s Foundation
C) YouWeCan Foundation
D) Beng Human Foundation

1. D
Central Government has reconstituted the Economic Advisory Council to the PM (EAC-PM). Bibek Debroy continues to be the Chairman of the Council.
2. B
Prime Minister Shri Narendra Modi attended the 18th Association of Southeast Asian Nations (ASEAN)-India Summit virtually on October 28, 2021. This was the 9th ASEAN-India Summit attended by PM Modi.
3. C
The International Internet Day is celebrated on October 29 every year across the world to celebrate the usage of internet for the first time.
4. A
The Reserve Bank of India has approved the appointment of Baldev Prakash as Managing Director and CEO of J&K Bank for a period of three years from the date of taking charge or April 10, 2022, whichever is earlier.
5. D
Shavkat Mirziyoyev, the incumbent President of Uzbekistan has been re-elected for a second five-year term, after he won with landslide victory in 2021 Presidential election held on October 24, 2021.
6. B
France successfully launched a military communication satellite, named Syracuse 4A, into orbit recently from Kourou, in French Guiana. The state-of-the-art satellite was launched on Ariane 5 rocket.
7. C
Central Government has appointed K V Kamath as chairperson of the National Bank for Financing Infrastructure and Development (NaBFID).
8. A
A new Indian Coast Guard Ship (ICGS) ‘Sarthak’ has been dedicated to the nation on October 28, 2021. It will be based at Porbandar in Gujarat. ICGS Sarthak is fourth in the series of five Offshore Patrol Vessels (OPVs) being built by Goa Shipyard Limited for the ICG, to boost maritime safety and security of India.
9. C
The World Psoriasis Day is observed every year on 29 October by the International Federation of Psoriasis Associations (IFPA) to promote awareness, empowerment, and action for improving the quality of life for people with psoriasis and psoriatic arthritis. The theme for 2021 World Psoriasis Day is “Uniting for action”.
10. D
In Gujarat, Chief Minister Bhupendra Patel has announced the launch of a new scheme titled ‘Go-Green’, to provide electric two-wheelers at subsidised rates to construction and industrial workers of the state.
11. B
The Union Minister for Health and Family Welfare, Dr. Mansukh Mandaviya participated in the CII Asia Health 2021 summit on October 28, 2021 through video-conferencing. The theme of the two-day summit is ‘Transforming Healthcare for a better tomorrow’.
12. D
An Indian-origin Canadian politician Anita Anand has been appointed as the new Defence Minister of the country on October 26, 2021 in a Cabinet reshuffle by Prime Minister Justin Trudeau.
13. B
The seven-member EAC-PM has been reconstituted for a period of 2 years.
14. A
The Summit was held under the Chairmanship of Sultan of Brunei.
15. C
The authorized share capital of the NaBFID is Rs one lakh crore. The initial paid-up capital of NaBFID is Rs 20,000 crore. The headquarters of NaBFID is in Mumbai.
16. C
The central government has recently announced the launch of “Har Ghar Dastak Abhiyan” mega vaccination campaign against the corona virus from next month. Under which health workers will go door to door and apply the second vaccine of Kovid-19 to the eligible people.
17. D
The Strategic Forces Command of the Indian Army recently conducted the first successful user test of Agni V ballistic missile from APJ Abdul Kalam Island in Odisha. The missile was tracked by telemetry and radar ships of the Defense Research and Development Organization. The missile is capable of hitting a target up to 5,000 km away.
18. D
The state of Goa in India has recently become the first open defecation free state. Under the Har Ghar Jal Mission, Goa has become the first state to achieve this feat. PM Modi has said that Goa is successfully implementing many government schemes for the convenience and dignity of women.
19. C
Yogi Adityanath government of Uttar Pradesh has recently announced to change the name of Faizabad railway station to “Ayodhya Cantt”. Whereas it was earlier named Mughalsarai railway station by the Yogi government as Deen Dayal Upadhyay Nagar and Manduadih as Banaras railway station.
20. C
YouweCan Foundation in partnership with SBI Foundation and State Government of Goa has launched this initiative.