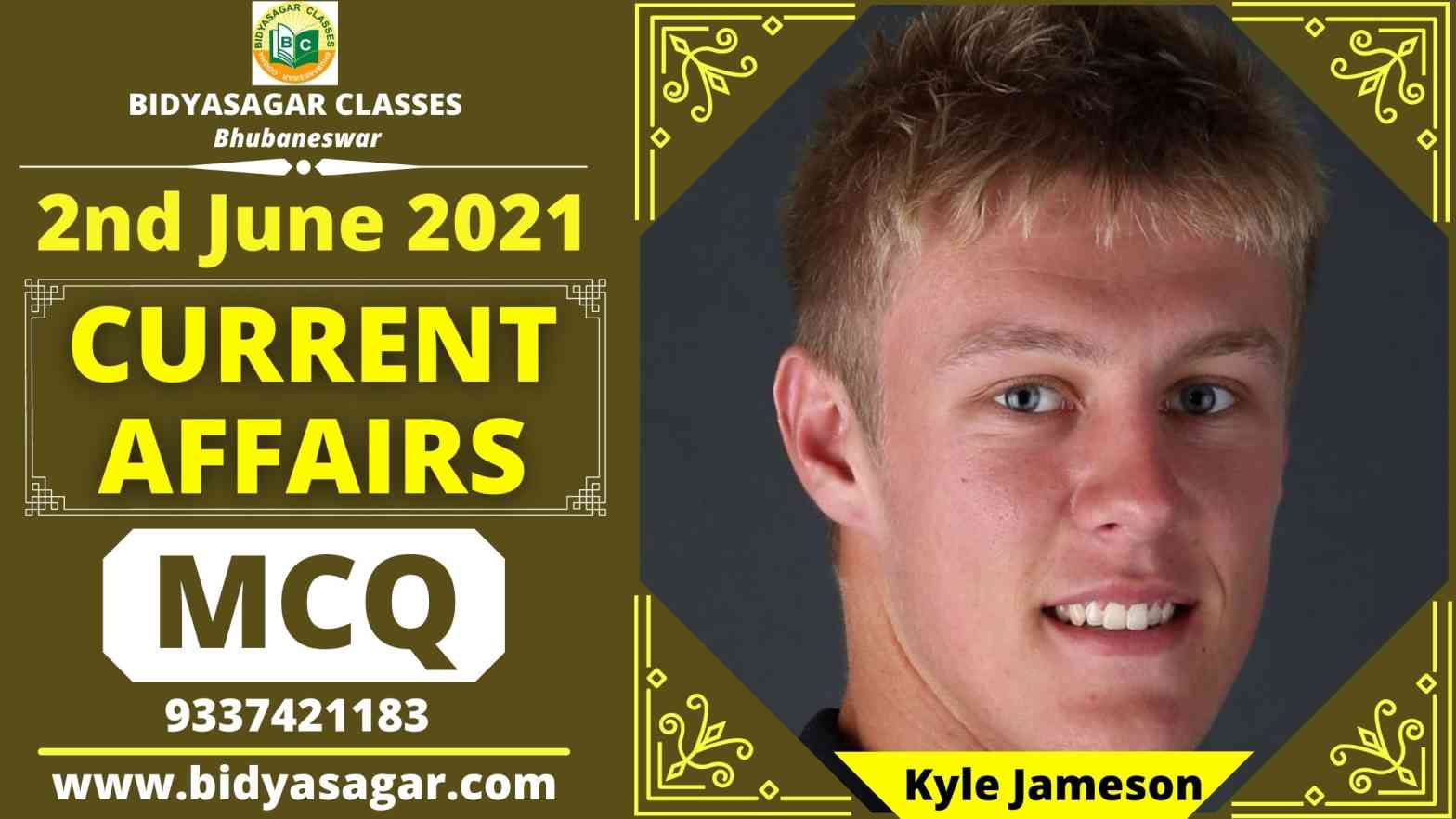 1. What is the projected GDP growth rate of the Indian economy for FY22 as per Moody’s latest report?
A) 8.1%
B) 9.3%
C) 10.7%
D) 11.2%
2. Name the Indian who has been awarded the ‘WHO Director-General Special Recognition Award’ for accomplishments in the area of tobacco control
A) Narendra Modi
B) Smriti Irani
C) Harsh Vardhan
D) Piyush Goyal
3. Which country has launched the world’s first Nano Urea, for the welfare of the farmers across the globe?
A) Japan
B) Malaysia
C) China
D) India
4. The multilateral military exercises, ‘Steadfast Defender 2021’, has been organized by which group of the intergovernmental organization?
A) G-20
B) NATO
C) OPEC
D) BRICS
5. What is the estimated GDP growth rate for India in the fiscal year 2021-22, as per SBI?
A) 7.9%
B) 8.7%
C) 9.9%
D) 10.4%
6. Jagannath Bidyadhar Mohapatra has been roped in as the new Chairman of which of these organizations?
A) CBDT
B) NITI Aayog
C) CBI
D) SIDBI
7. Kappa and Delta, which has been in news recently, is related to ________
A) Satellite launch
B) Covid variant
C) Cyclone
D) Food Production
8. Research Design and Standards Organisation (RDSO) is the standard body to join the ‘One Nation, One Standard’ scheme of the central government. The RDSO is based in which city?
A) Mumbai
B) New Delhi
C) Lucknow
D) Pune
9. For FY23 (2022-23), Moody’s has estimated the GDP growth rate of India at _______________
A) 9.4%
B) 6.2%
C) 8.5%
D) 7.9%
10. Which online medical platform has acquired Medlife, to become the largest online pharmacy in India?
A) Apollo247
B) NetMeds
C) Practo
D) PharmEasy
11. Who has been appointed as the new President of Confederation of Indian Industry (CII) for 2021-22?
A) Rajesh Gopinathan
B) T V Narendran
C) O. P. Bhatt
D) Cyrus Mistry
12. The Research report ‘Ecowrap’ is released by which organization?
A) Moody’s
B) CBDT
C) SBI
D) WHO
13. Who has launched the world’s first nano urea liquid for farmers?
A. FCCI
B. IFFCO
C. BCCI
D. NITI Aayog
14. Tsang Yin-hung has recently set the record for the fastest speed to climb Mount Everest?
A. 15 hours 50 minutes
B. 20 hours 50 minutes
C. 25 hours 50 minutes
D. 35 hours 50 minutes
15. Which state government has announced a 10 percent reservation for the Maratha community in EWS?
A. Government of Kerala
B. Government of Gujarat
C. Government of Tamil Nadu
D. Government of Maharashtra
16. Indian Railways has recently set the record for the highest freight movement of 114.8 MT in which month?
A. March
B. April
C. May
D. February
17. What is the name of Vice Admiral, he has taken over as the Chief of Materials by AVSM, VSM recently.
A. Suresh Nitha
B. Sandeep Naithani
C. Mishra Sanjeet
D. Sudeep Shekhar
18. RDSO under which of the following department has been declared as the first SDO institute of BIS?
A. Education Department
B. Security Department
C. Science Department
D. Department of Consumer Affairs
19. Which New Zealand player has been awarded the Kiwi Cricketer of the Year Award?
A. Devon Conway
B. Ken Williamson
C. Ross Taylor
D. Kyle Jameson
20. After coronavirus, which country recently the first case of bird flu H10N3 has been reported?
A. Japan
B. China
C. America
D. Australia

1. B
Moody’s Investors Service has projected the GDP growth rate of the Indian economy for 2021-22 (FY22) at 9.3%
2. C
The Union Minister of Health and Family Welfare, GoI, Dr. Harsh Vardhan has been awarded the ‘WHO Director-General Special Recognition Award’ for his accomplishments in the area of tobacco control.
3. D
Leading cooperative society, IFFCO has launched the world’s first ”Nano Urea” for farmers across the world. The indigenously developed ”Nano Urea” will be in liquid form. The production of urea will begin from June 2021.
4. B
The North Atlantic Treaty Organization (NATO) has organized three-part series of multilateral military exercises, dubbed as Steadfast Defender 2021, to test NATO’s readiness and military mobility. The exercise will be taking place in the Atlantic and Europe, and into the Black Sea region.
5. A
SBI economists, in its research report – Ecowrap, has sharply cut the GDP growth estimates for the Indian economy to 7.9 percent in FY22, compared to an earlier projection of 10.4 percent. This is the lowest growth rate estimate for India among all analysts.
6. A
Jagannath Bidyadhar Mohapatra, a member of the Central Board of Direct Taxes (CBDT), has been given the additional charge as the Chairman of CBDT, for a period of three months.
7. B
The UN health agency, World Health Organisation (WHO), has given easy-to-say labels to two variants of the Covid-19, first found in India. The two variants are B.1.617.1 and B.1.617.2. The B.1.617.1 variant of the Covid 19 has been named as ‘Kappa’ while the B1.617.2 variant is named as ‘Delta.’
8. C
Lucknow-based Research Design and Standards Organisation (RDSO), which sets standards for the Indian Railway Sector, has become the first standards body in the country to join the ‘One Nation, One Standard’ scheme of the central government. The RDSO, the sole R&D wing of the Railways Ministry, has now been recognized as a ‘Standard Developing Organisation’ by the Bureau of Indian Standards (BIS), for a three years period. BIS is the implementing agency for the ‘One Nation, One Standard’ scheme.
9. D
2022-23 (FY23) – 7.9%
10. D
PharmEasy, an online medical platform, has acquired its rival Medlife, to create India’s largest online pharmacy. Medlife has now ceased to operate with effect from May 25, 2021, following the merger with PharmEasy. With this acquisition, Medlife users will automatically become PharmEasy users. API Holdings, the parent of PharmEasy, has acquired 100 percent equity shares of Medlife in return for 19.59 percent equity share capital, estimated at $250 million.
11. B
T V Narendran, the Managing Director, and Chief Executive Officer of Tata Steel has been elected as the new President of the industry chamber, Confederation of Indian Industry (CII) for 2021-22.
12. C
State Bank of India (SBI)
13. B
The world’s first nano urea liquid for farmers across the world has been launched by Indian Farmers Fertilizer Cooperative Limited (IFFCO), this nano urea liquid has been developed after many years of research by scientists and engineers. Has been developed through indigenous technology.
14. C
Tsang Yin-hung recently set the record for the fastest summit of the world’s highest peak Mount Everest in 25 hrs 50 mins. She has become the first woman to scale Everest at the fastest speed. Before them, the record of conquering Everest in 39 hours and 6 minutes was in the name of Nepalese female mountaineer, Phunjo Zhangmu Lama.
15. D
The Maharashtra government has recently announced a 10 percent reservation for the Maratha community in EWS. According to the new order of the Government of Maharashtra, Maratha candidates can take advantage of EWS reservation in direct service.
16. C
Indian Railways has recently set the record for the highest freight movement of 114.8 MT in the month of May 2021 till date. The loading for May 2021 has been higher by 9.7 percent as compared to the highest loading of 104.6 MT in May 2019.
17. B
Vice Admiral Sandeep Naithani has recently taken charge of AVSM, VSM as Chief of Material. He graduated from National Defense Academy, Khadakwasla, Pune. He is a distinguished scholar of Defense Services Staff College and National Defense College.
18. D
Bureau of Indian Standards under the recently launched “One Nation One Standard” campaign to the RDSO i.e.Research Design and Standards Organization of Indian Railways under the Department of Consumer Affairs. The first SDO of the Institute has been declared.
19. D
New Zealand cricket team all-rounder Kyle Jameson has recently been awarded the Kiwi Cricketer of the Year Award. He has been given a player’s cap for 2021. Kyle Jameson made his international cricket debut against India in February 2020. He has been honored with the award by wicketkeeper-batsman BJ Watling.
20. B
After the coronavirus, recently the first case of bird flu H10N3 has been reported in China. The first person infected with the H10N3 strain has been found in China’s eastern Jiangsu province. H10N3 is a less pathogenic or less severe strain of the bird flu virus and the risk of its wide spread is much lower.