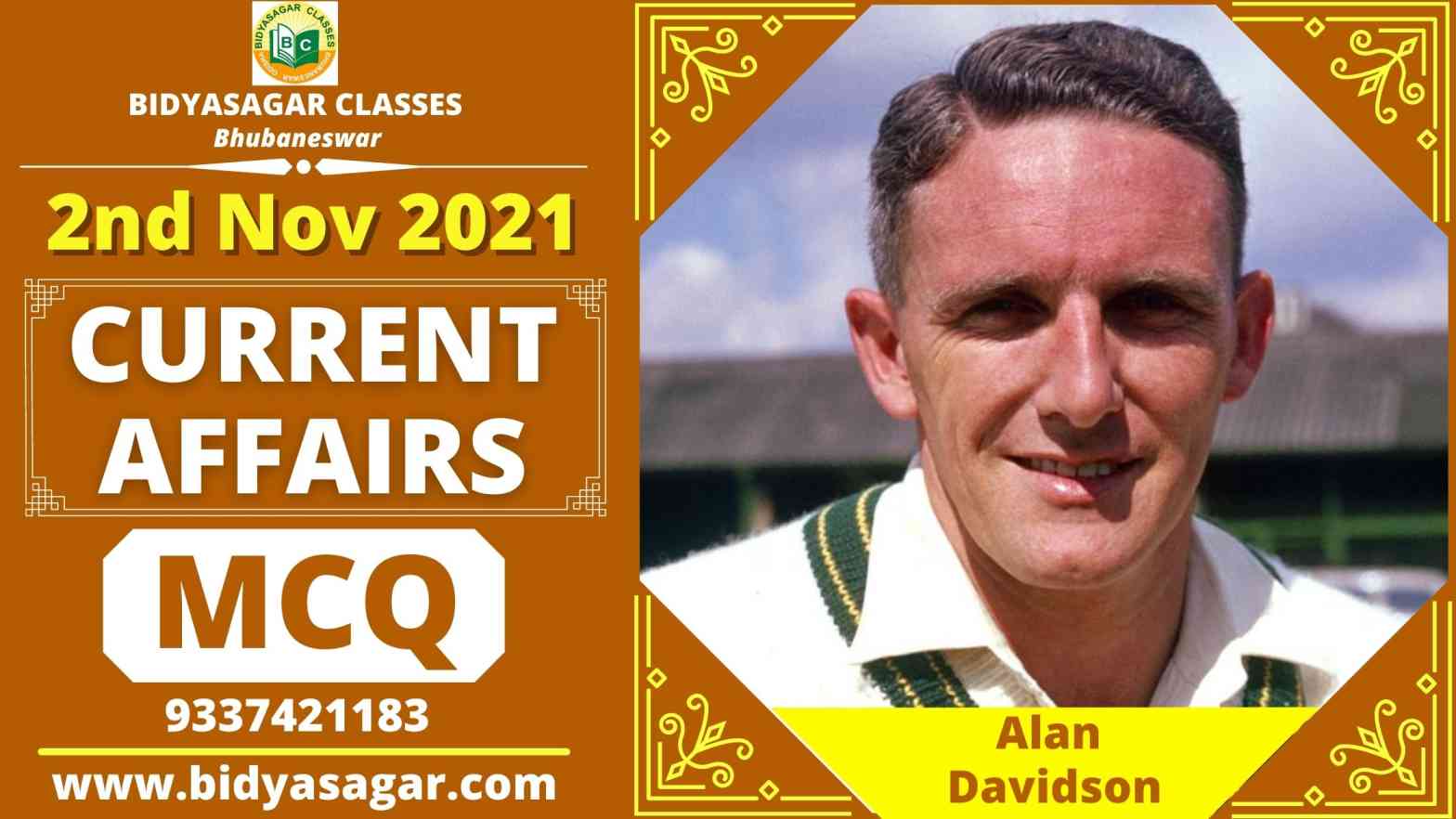 In this article, we will discuss MCQ on important current affairs of 2nd November 2021 and their answers with explanations.

1. Which country was the host nation for the G20 Summit 2021?
A) Scotland
B) Italy
C) Russia
D) UAE
2. The ‘Ganga Utsav 2021 – The River Festival’ is which edition of the annual Ganga festival?
A) 5th
B) 4th
C) 3rd
D) 6th
3. The Indian Navy frigate TUSHIL has recently been launched in which country?
A) United States
B) Israel
C) Russia
D) Japan
4. Sports Ministry has inaugurated three new Khelo India Sports Centres of Excellence (KISCE) at Delhi, Lucknow and Chennai. With this how many KISCE are now operational in India?
A) 21
B) 27
C) 18
D) 32
5. Which international financial institution has signed USD 40 million health project agreement with India for the state of Meghalaya?
A) UNDP
B) Asian Development Bank
C) World Bank
D) AIIB
6. The G20 Summit 2021 was which edition of the annual event?
A) 14th
B) 18th
C) 20th
D) 16th
7. Centre has formed an Empowered Group of Secretaries (EGoS) headed by Cabinet Secretary to review and monitor implementation of the PM Gati Shakti National Master Plan (NMP). The EGoS has how many members?
A) 20
B) 12
C) 15
D) 17
8. Which word has been chosen as the Word of the Year 2021 by Oxford English Dictionary ?
A) Jab
B) Immunity
C) Vax
D) None of these
9. Which day is celebrated as International Day to End Impunity for Crimes annually?
A) 01 November
B) 02 November
C) First Monday of November
D) First Tuesday of November
10. Which country has named its native long-tailed bat as the Bird of the Year 2021?
A) Sweden
B) Ireland
C) Australia
D) New Zealand
11. The G20 member nation leaders have committed to take action to limit global warming at what level above pre-industrial levels?
A) 1.5 degrees Celsius
B) 2 degrees Celsius
C) 3 degrees Celsius
D) 2.5 degree Celsius
12. Alan Davidson, who has passed away recently was the cricket all rounder of which country?
A) England
B) South Africa
C) Australia
D) New Zealand
13. Who among the following has sought exemption from data bill from the Government of India to avoid duplicity of laws?
A) NITI Aayog
B) Ministry of Information and Broadcasting
C) Unique Identification Authority of India
D) World Trade Organization
14. According to the latest report released by which of the following commission, 400 million people do not have any health insurance?
A) Planning Commission
B) Education Commission
C) NITI Aayog
D) Health Commission
15. Which of these ministries has recently launched India’s first manned ocean mission “Samudrayaan” in Chennai?
A) Ministry of Information and Broadcasting
B) Ministry of Earth Sciences
C) Ministry of Railways
D) Ministry of Education
16. Recently which ministry has started 3 nationwide competitions for patriotic song writing, lullaby writing and rangoli making?
A) Ministry of Education
B) Ministry of Sports
C) Ministry of Culture
D) Ministry of Information and Broadcasting
17. Which of the following state government has announced to set up a Center of Excellence for FinTech or Financial Technology in the state soon?
A) Government of Kerala
B) Government of Punjab
C) Gujarat government
D) Government of Karnataka
18. India and Israel have decided to constitute a new task force to promote defense cooperation during which meeting of the Working Group?
A) 11th meeting
B) 15th meeting
C) 18th meeting
D) 25th meeting

1. B
The 2021 G20 (Group of Twenty) Summit was held in Rome, Italy on October 30 and 31, 2021. It was the 16th meeting of G20 group. The meeting was held under the chairmanship of Italian Prime Minister Mario Draghi.
2. A
The 5th edition of the three day-long Ganga Utsav has been organised from November 01 to 03, 2021 in virtual format. The “Ganga Utsav 2021 – The River Festival “ will not only celebrate the glory of river Ganga but all the rivers of the country to promote the celebration of ‘Nadi Utsav’ (River Festival).
3. C
The seventh Indian Navy frigate of the P1135.6 class was launched at the Yantar Shipyard at Kaliningrad in Russia on October 28, 2021. The ship has been formally named as Tushil, a Sanskrit word which means protector shield.
4. B
The total number of KISCEs in India has increased to 27 spread across 26 States and Union Territories.
5. C
The Government of India and the World Bank have inked USD 40 million health project agreement for the state of Meghalaya on October 28, 2021.
6. D
It was the 16th meeting of G20 group. The meeting was held under the chairmanship of Italian Prime Minister Mario Draghi.
7. A
Centre has constituted an Empowered Group of Secretaries (EGoS) to review and monitor the mechanism for the development and implementation of the PM Gati Shakti National Master Plan (NMP). The Cabinet Secretary will be the Chairperson of 20-member EGoS.
8. C
‘Vax’ has been chosen as the word of the year by the Oxford English Dictionary (OED) in 2021. Vax derived from the Latin word vacca, which means cow.
9. B
The International Day to End Impunity for Crimes against Journalists is observed annually on 2 November.
10. D
The critically endangered New Zealand long-tailed bat has been named as the New Zealand Bird of the Year 2021.
11. A
The G20 leaders committed to take action to limit global warming at 1.5 degrees Celsius above pre-industrial levels.
12. C
The Australian and New South Wales cricket all-rounder Alan Davidson has passed away at the age of 92.
13. C
Unique Identification Authority of India has recently sought exemption from data bill from the Government of India to avoid duplication of laws. UIDAI is a statutory authority set up by the Ministry of Electronics and Information Technology under the Aadhaar Act, 2016.
14. C
According to the latest report released by NITI Aayog, 40 crore people do not have any health insurance. According to the report, at least 30 percent of the population or 400 million people, known as the ‘missing middle’, are deprived of any financial security for health.
15. B
Ministry of Earth Sciences has recently launched India’s first manned ocean mission “Samudrayaan” in Chennai. With this, India has joined the “elite club” in the Ocean Mission along with countries like the US, Russia, France, Japan and China.
16. C
Ministry of Culture has recently launched 3 nationwide competitions for Patriotic Song Writing, Lullaby Writing and Rangoli Making. This contest will run for a few months as “#UnityInCreativity” and the winners will be rewarded.
17. D
C.N. According to Ashwath Narayan, the Karnataka government has announced to set up a Center of Excellence for FinTech or Financial Technology in the state soon. The state government also plans to set up a software technology park in the city with the help of Karnataka State Electronics Corporation Ltd.
18. B
India and Israel recently decided to constitute a new task force to promote defense cooperation during the 15th working group meeting Is. They have also decided to form a sub-working group. This working group is an apex body between the “Ministry of Defence” of the two countries.