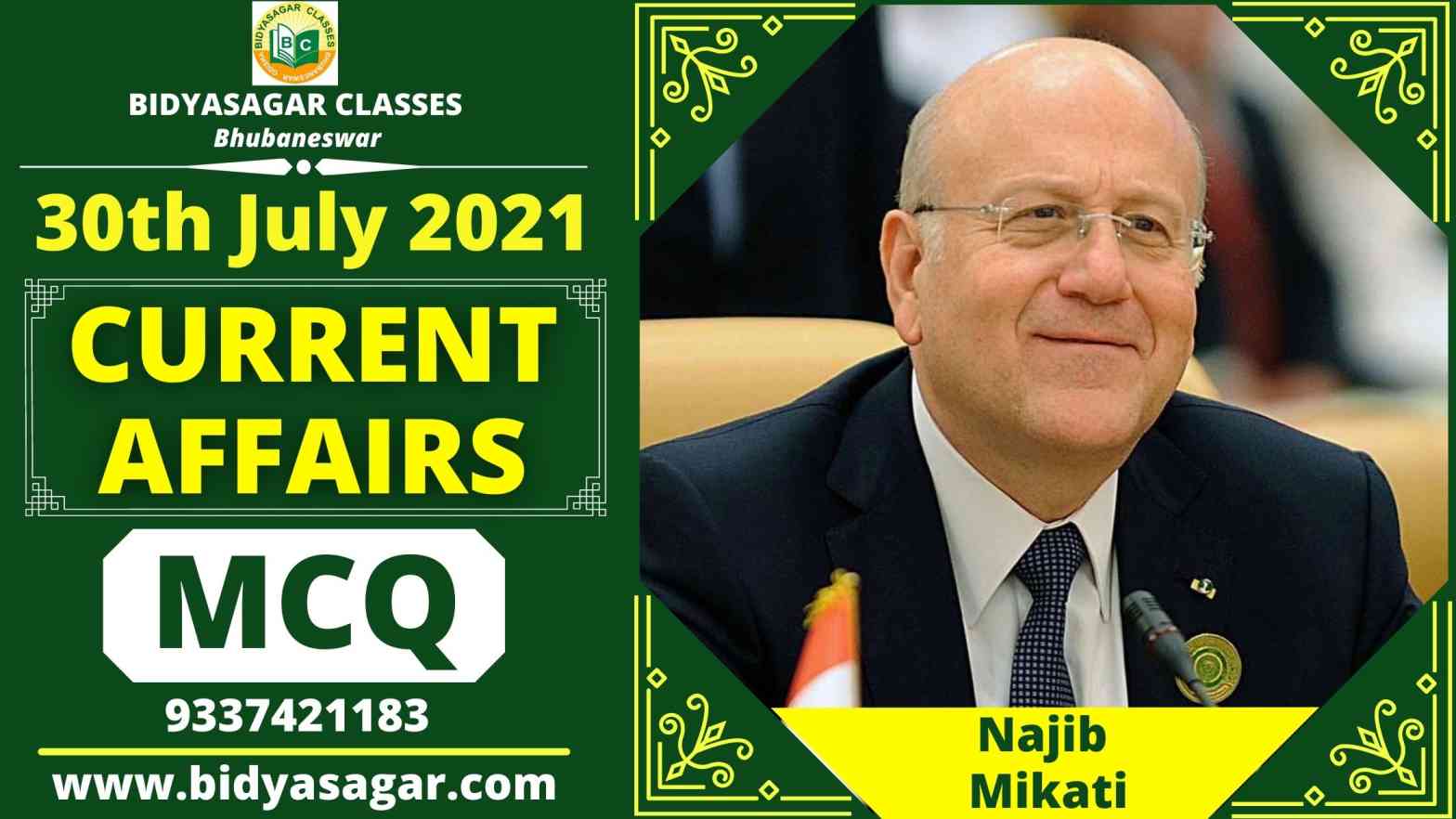 In this article, we will discuss MCQ on important current affairs of 30th July 2021 and their answers with explanations.

1. To mark the first anniversary of the National Education Policy (NEP), PM MODI launched a competency-based assessment program for grades 3, 5, and 8 introduced by the CBSE. What is the name of the program?
A) SIKSHA
B) NISHTHA
C) SAFAL
D) GYAN
2. The World Day Against Trafficking in Persons is observed every year on which day?
A) July 31
B) July 30
C) July 29
D) July 28
3. Which state in India has become the first to reserve government jobs in favor of transgender persons?
A) Karnataka
B) Uttar Pradesh
C) Haryana
D) Gujarat
4. RBI has recently imposed a monetary penalty of what amount on Axis Bank for non-compliance with certain provisions of the norms of the central bank including cybersecurity?
A) Rs 2 crore
B) Rs 12 crore
C) Rs 7 crore
D) Rs 5 crore
5. RBI has approved for the Government of the Union Territory (UT) of Ladakh to acquire _______ percent of the paid-up equity capital of Jammu and Kashmir Bank Ltd
A) 9.25%
B) 7.11%
C) 8.23%
D) 10.00%
6. Intrinsic is a new company launched by which organisation for building industrial robots software?
A) Microsoft
B) Alphabet
C) IBM
D) Apple
7. Najib Mikati has been elected as the Prime Minister of which country?
A) Lebanon
B) Turkey
C) Israel
D) Iran
8. What is the theme of the World Day Against Trafficking in Persons for 2021?
A) Working on the Frontline to End Human Trafficking
B) Human Trafficking: Call Your Government To Action
C) Let’s act now to protect and assist trafficking victims
D) Victims Voices Lead The Way
9. Recently who has approved the Insolvency and Bankruptcy Code (Amendment) Bill, 2021?
A. Rajya Sabha
B. Lok Sabha
C. NITI Aayog
D. Planning Commission
10. Scientists have discovered the first evidence of water vapor in the icy moon Ganymede of which planet with the help of the Hubble Space Telescope?
A. Mercury
B. Fri
C. Saturn
D. Jupiter
11. The Harappan city Dholavira located in which state of India has been included in the UNESCO World Heritage List?
A. Bihar
B. Gujarat
C. Maharashtra
D. Kerala
12. On its 15th Foundation Day, which ministry has recently launched Earth System Science Data Portal?
A. Ministry of Education
B. Ministry of Women and Development
C. Ministry of Earth Sciences
D. Ministry of Information and Broadcasting
13. Who has recently started a project on the exploration of Lithium as part of the government’s energy security plans?
A. NITI Aayog
B. Central Government
C. Planning Commission
D. Geological Survey of India
14. Which of the following country has decided to return 14 artifacts to India?
A. Japan
B. America
C. Australia
D. China
15. The government of Saudi Arabia has announced a travel ban of how many Years for the countries included in the ‘Red List’ including India?
A. 2 Years
B. 3 Years
C. 4 Years
D. 5 Years
16. Which of the following country’s Buen Retiro Park and Paseo del Prado have been added to the UNESCO World Heritage List?
A. Italy
B. America
C. Israel
D. Spain
17. Govt of UT of Ladakh gets RBI nod to acquire _____ stake in J&K Bank.
(a) 7.23%
(b) 8.23%
(c) 9.23%
(d) 10.23%
18. Which automobile company has announced a partnership with Maharashtra’s Savitribai Phule Pune University to train youth in automobile retail?
(a) Volkswagen India
(b) Tata Motors
(c) Maruti Suzuki India Limited
(d) Toyota Kirloskar Motor
19. The Reserve Bank of India has imposed a monetary penalty of Rs 5 crore on private sector lender __________.
(a) Axis Bank
(b) ICICI Bank
(c) Yes Bank
(d) HDFC Bank
20. Which of the following bank has become the first bank in the country to achieve the milestone of issuing 1 crore FASTags?
(a) IDBI Bank
(b) Central bank of India
(c) SBI Bank
(d) Paytm Payments Bank

1. C
Prime Minister Narendra Modi launched SAFAL initiative of Central Board of Secondary Education (CBSE), on July 29, 2021, on the occasion of the first anniversary of National Education Policy (NEP). SAFAL stands for Structured Assessment For Analysing Learning. SAFAL is a competency-based assessment programme for grades 3, 5 and 8 introduced by the CBSE, to assess the progress of foundational skills and basic learning outcomes among students.
2. B
The World Day Against Trafficking in Persons is observed every year on July 30.
3. A
Karnataka has become the first state in India to reserve jobs in public employment in favour of transgender persons. As per the information, the state government has approved 1% horizontal reservation for transgenders in government jobs.
4. D
The Reserve Bank of India (RBI) has imposed a monetary penalty of Rs 5 crore on Axis Bank on July 28, 2021, for non-compliance with certain provisions of the norms of central bank.
5. C
On July 26, 2021, the Government of the Union Territory (UT) of Ladakh has received the approval of the Reserve Bank of India (RBI) to acquire 8.23 percent of the paid-up equity capital of Jammu and Kashmir Bank Ltd.
6. B
Google’s parent company, Alphabet has announced that they will soon launch a new company, known as Intrinsic, which will focus on building industrial robots software.
7. A
Billionaire businessman Najib Mikati has been voted as the new prime minister of Lebanon in a Parliament election on July 26, 2021.
8. D
The 2021 theme for World Day Against Trafficking in Persons is “VICTIMS’ VOICES LEAD THE WAY”
9. B
Lok Sabha, the lower house of Parliament, has recently approved the Insolvency and Bankruptcy Code (Amendment) Bill, 2021. This bill became effective from 4 April 2021. Under which the debtor businessmen coming under the small and medium unit have got the facility of insolvency settlement process under the already prepared system.
10. D
Scientists have recently discovered the first evidence of water vapor in Jupiter’s icy moon Ganymede with the help of the Hubble Space Telescope. Researchers have discovered the thermal escape of water vapor from the icy surface of the Moon. Jupiter’s moon Ganymede is the largest moon and the 9th largest celestial body in our solar system.
11. B
Dholavira, a Harappan city located in the Kutch district of Gujarat state, has been included in the UNESCO World Heritage List. It is the 40th place in India to be included in the list of World Heritage Sites. The decision to include it in the prestigious list has been taken at the 44th UNESCO World Heritage Committee session in Fuzhou, China.
12. C
Ministry of Earth Sciences has recently launched Earth System Science Data Portal on its 15th Foundation Day. Which is an integrated digital web portal of the Ministry of Science Institutes. This web portal will make the data related to various disciplines of Earth System Science available for public use.
13. D
Geological Survey of India has recently started the project on exploration of Lithium under the energy security schemes of the government. GSI has started this project in the states of Andhra Pradesh, Arunachal Pradesh, Jharkhand, Chhattisgarh, Rajasthan and Jammu and Kashmir.
14. C
Australia has recently decided to return 14 artifacts to India, of which 6 are either stolen or illegally exported or whose existence is known to be I do not know. These include sculptures, photographs and a scroll. These collections of religious and cultural artifacts cost $2.2 million.
15. B
The government of Saudi Arabia has announced a travel ban of 3 Years for the countries included in the Red List including India in view of the new variant of Corona. The list included in this “Red List” includes many other countries including Afghanistan, Argentina, Brazil, Egypt, India, Indonesia, Lebanon, Pakistan, South Africa, Turkey and the United Arab Emirates.
16. D
The Buen Retiro Park and Paseo del Prado of Madrid, Spain have been added to the UNESCO World Heritage List. With this the total number of World Heritage Sites in Spain has gone up to 49, which is the third highest number globally after Italy and China. Prior to the addition of these two sites, no heritage site was located in Madrid, the capital of Spain.
17. B
The Reserve Bank of India has accorded its approval to the Government of the Union Territory (UT) of Ladakh to acquire 8.23 per cent of the paid-up equity capital of Jammu and Kashmir Bank Ltd as on the date of enforcement of Jammu and Kashmir Reorganisation Act, 2019 ( October 31, 2019).
18. C
Maruti Suzuki India Limited has announced a partnership with Maharashtra’s Savitribai Phule Pune University to train youth in automobile retail. The aim is to offer a customised three years “Bachelor of Vocational Studies in Retail Management” course to students.
19. A
The Reserve Bank of India has imposed a monetary penalty of Rs 5 crore on private sector lender Axis Bank. The penalty is for contravention of and non-compliance with certain provisions of directions issued by RBI on ‘Strengthening the Controls of Payment Ecosystem between Sponsor Banks and SCBs/UCBs as a Corporate Customer.
20. D
Paytm Payments Bank has become the first bank in the country to achieve the milestone of issuing 1 crore FASTags.