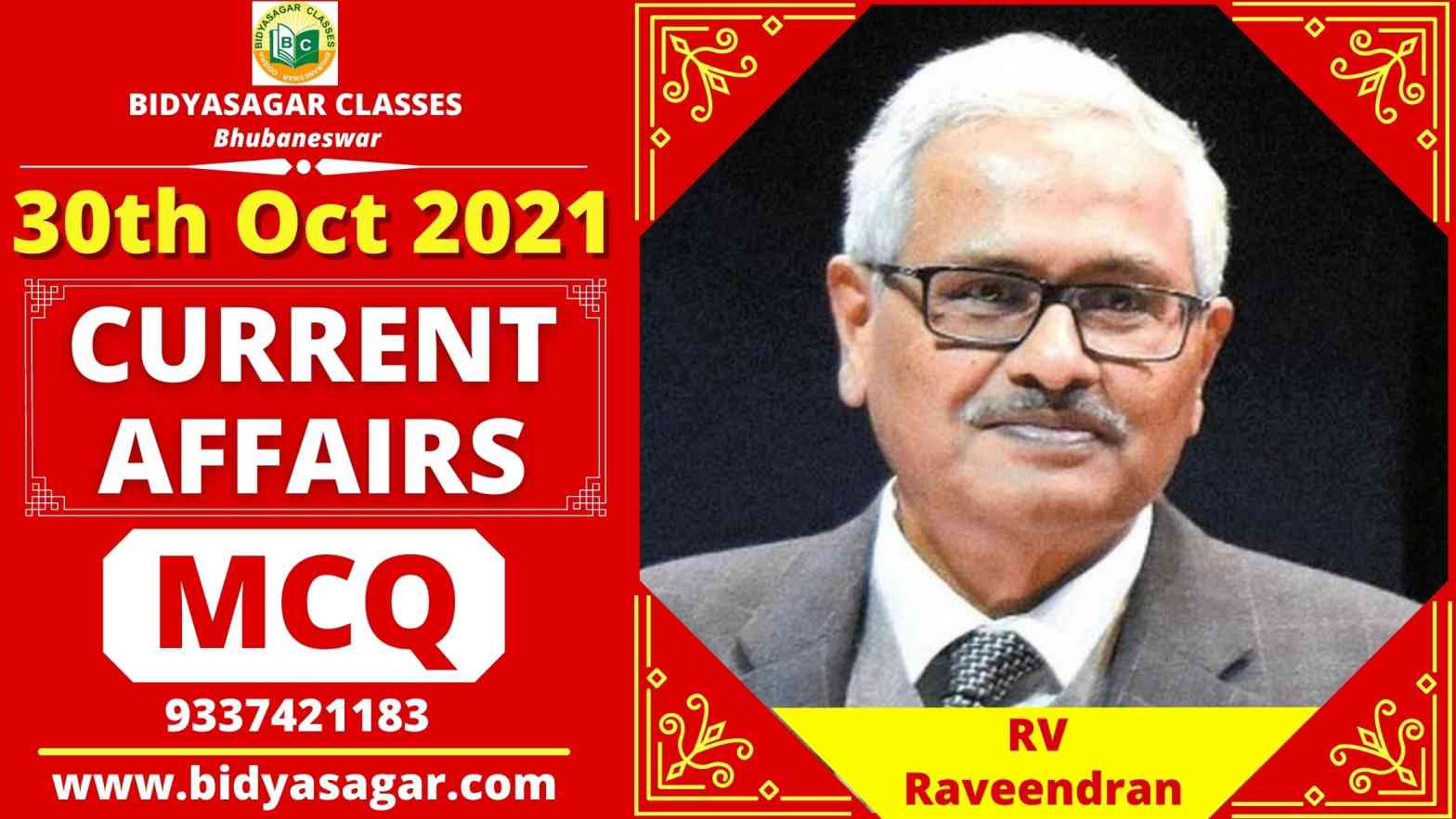 In this article, we will discuss MCQ on important current affairs of 30th October 2021 and their answers with explanations.

1. Which state has topped the State Energy Efficiency Index (SEEI) 2020?
A) Tamil Nadu
B) Madhya Pradesh
C) Maharashtra
D) Karnataka
2. Facebook Inc. has rebranded the company’s name. What is the new name of the social media network giant?
A) Meta
B) Zip
C) Lisa
D) Grep
3. Which Indian state has achieved the feat of becoming the first state of the country to have its own Wildlife Action plan (2021-30)?
A) Rajasthan
B) Gujarat
C) Maharashtra
D) Haryana
4. The ministry of Agriculture and Farmers Welfare is observing the year 2021 as __________ upon the recommendation of the UN-FAO?
A) International Year of Seeds
B) International Year of Fertilisers
C) International Year of Pulses and Cereals
D) International Year of Fruits and Vegetables
5. Who has been named as the Chairperson of the three-member independent expert committee constituted to investigate into Israeli spyware ‘Pegasus’ snooping?
A) K. C. Das Gupta
B) RV Raveendran
C) R. S. Bachawat
D) P. Satyanarayana Raju
6. The report titled “Health Insurance for India’s Missing Middle” highlights the gap in the health insurance coverage across the country. The report has been released by which body?
A) ASSOCHAM
B) Observer Research Foundation (ORF)
C) NITI Aayog
D) IRDAI
7. Shaktikanta Das has been re-appointed as the Governor of the RBI for three more years by the ACC. Mr Das is the _____________ Governor of RBI?
A) 21st
B) 25th
C) 27th
D) 22nd
8. Union Minister Shri Hardeep S. Puri inaugurated the 14th edition of Urban Mobility India (UMI) Conference 2021 through video conferencing. What was the theme of the conference?
A) Accessible and Liveable Cities
B) Mobility for All
C) Smart Cities
D) Green Urban Mobility
9. Cricket player Ryan ten Doeschate has announced his retirement from international cricket for which country?
A) South
B) Zimbabwe
C) Netherlands
D) West Indides
10. The sixth edition of the National Formulary of India (NFI) was recently released by which of these ministries?
A) Ministry of Health and Family Welfare
B) Ministry of Defence
C) Ministry of Finance
D) Ministry of Education
11. Which of the following ministry has recently launched a market segment named “Green Day Ahead Market (GDAM)”?
A) Ministry of Textiles
B) Ministry of Information and Broadcasting
C) Ministry of New and Renewable Energy
D) Ministry of Education
12. Which of the following cinema’s power star actor Puneet Rajkumar has passed away recently?
A) Hindi Cinema
B) English cinema
C) Tamil Cinema
D) Kannada Cinema
13. Which of the following organization has recently released “The Changing Wealth of Nations 2021” report?
A) NABARD
B) World Bank
C) Swiss Bank
D) UNESCO
14. The central government has extended the tenure of RBI Governor Shaktikanta Das by how many years?
A) 2 years
B) 3 years
C) 4 years
D) 5 years
15. Which day is celebrated around the world on 30th October?
A) World Money Day
B) World Post Day
C) World Savings Day
D) World Sports Day
16. India Post Payments Bank and which bank have signed an MoU for providing home loans to customers?
A) ICICI Bank
B) Bank of India
C) HDFC Bank
D) Canara Bank
17. Which of the following social media company has changed its corporate name to “META”?
A) Facebook
B) Twitter
C) Whatsapp
D) Snapchat
18. India has applied for loan from Asian Development Bank and which bank to buy Covid-19 vaccine?
A) Swiss Bank
B) World Bank
C) NABARD
D) Asian Infrastructure Investment Bank

1. D
Karnataka state has topped the State Energy Efficiency Index (SEEI) 2020. Rajasthan is on second rank followed by Haryana on third.
2. A
Mark Zuckerberg-owned Facebook Inc has changed the corporate name of the world’s largest social media platform to “Meta” to “reflect its emphasis on building the metaverse vision”. However, the names of the flagship social network will remain the same. With the change in the name, ‘Meta Platforms, Inc. will henceforth be called as the parent organisation of Facebook and its subsidiaries (Instagram, Messenger, Whatsapp, Oculus, Workplace, etc.)
3. C
Maharashtra has become the first state in the country to release its own Wildlife Action plan (2021-30).
4. D
The Union Minister for Agriculture & Farmers Welfare Shri Narendra Singh Tomar addressed a National Conference on “International Year of Fruits and Vegetables” on October 29, 2021. The conference was organised by the Ministry of Agriculture and Farmers’ Welfare in collaboration with the United Nations Food and Agriculture Organization (FAO).
5. B
The Supreme Court has set up a three-member independent expert committee to investigate into allegations of using Israeli spyware ‘Pegasus’ for surveillance of Indian citizens. The expert committee will be led by former SC judge RV Raveendran. Other two member of the committee are Alok Joshi and Dr Sundeep Oberoi.
6. C
NITI Aayog has released a comprehensive report titled “Health Insurance for India’s Missing Middle”, on October 29, 2021. The report highlights the gaps in the health insurance coverage across the country and offers solutions to address the situation.
7. B
The Appointments Committee of the Cabinet (ACC) has approved the reappointment of Shaktikanta Das as the Governor of Reserve Bank of India ( RBI) for a further period of three years with effect from December 10, 2021. Mr. Das assumed the charge as the 25th governor of RBI on December 12, 2018 for three years.
8. B
The 14th edition of Urban Mobility India (UMI) Conference 2021 was held through video-conferencing on October 29, 2021. The conference was inaugurated by Union Minister of Housing and Urban Affairs & Petroleum and Natural Gas Shri Hardeep S. Puri from New Delhi. The theme of the day long Conference “Mobility for All”.
9. C
Netherlands all-rounder Ryan ten Doeschate has announced his retirement from international cricket on October 28, 2021.
10. A
The Union Minister for Health and Family Welfare Dr. Mansukh Mandaviya launched the 6th edition of National Formulary of India (NFI) on October 28, 2021. NFI is published by Indian Pharmacopoeia Commission (IPC), under Ministry of Health and Family Welfare.
11. C
The Ministry of New and Renewable Energy has recently made a decision to enable power generation and distribution companies to buy or sell renewable energy through open access. has recently launched a market segment named “Green Day Ahead Market (GDAM)” for the purpose.
12. D
Actor Puneet Rajkumar, who is known as the power star of Kannada cinema, has recently passed away at the age of 46. People associated with the film industry across the country have mourned his death. High alert has been declared in Karnataka in view of the possibility of his fans coming on the streets.
13. B
The World Bank has recently released the report “The Changing Wealth of Nations 2021”. According to which, South Asia suffers the most in terms of loss of human capital due to air pollution. According to the report, human capital was the largest source of wealth in the world. In the year 2018, it comprised 64 percent of the total global wealth.
14. B
The Central Government has recently extended the tenure of Reserve Bank of India Governor Shaktikanta Das by 3 years till the year 2024. His term was ending on 10 December 2021. His tenure has been extended for a further period of three years or till further orders.
15. C
World Savings Day is celebrated across the world on 30 October. This day inspires to promote the savings and financial security of all individuals and all nations. World Savings Day is celebrated every year on 30 October across India due to the death of Mrs. Indira Gandhi on 31 October 1984.
16. C
Under this agreement, India Post Payments Bank will handle loan sourcing and HDFC will handle credit, technical and legal evaluation as well as processing and disbursement for all home loans.
17. A
Social media company Facebook has recently changed its corporate name to “META”. The company’s CEO Mark Zuckerberg has said that the company is focused on building its new metaverse. This change will bring together its various apps and technology. However, its corporate structure will not change.
18. D
India has applied for loan from Asian Development Bank and AIIB to buy Covid-19 vaccine. AIIB is a multilateral development bank and Asian Development Bank is a regional development bank.