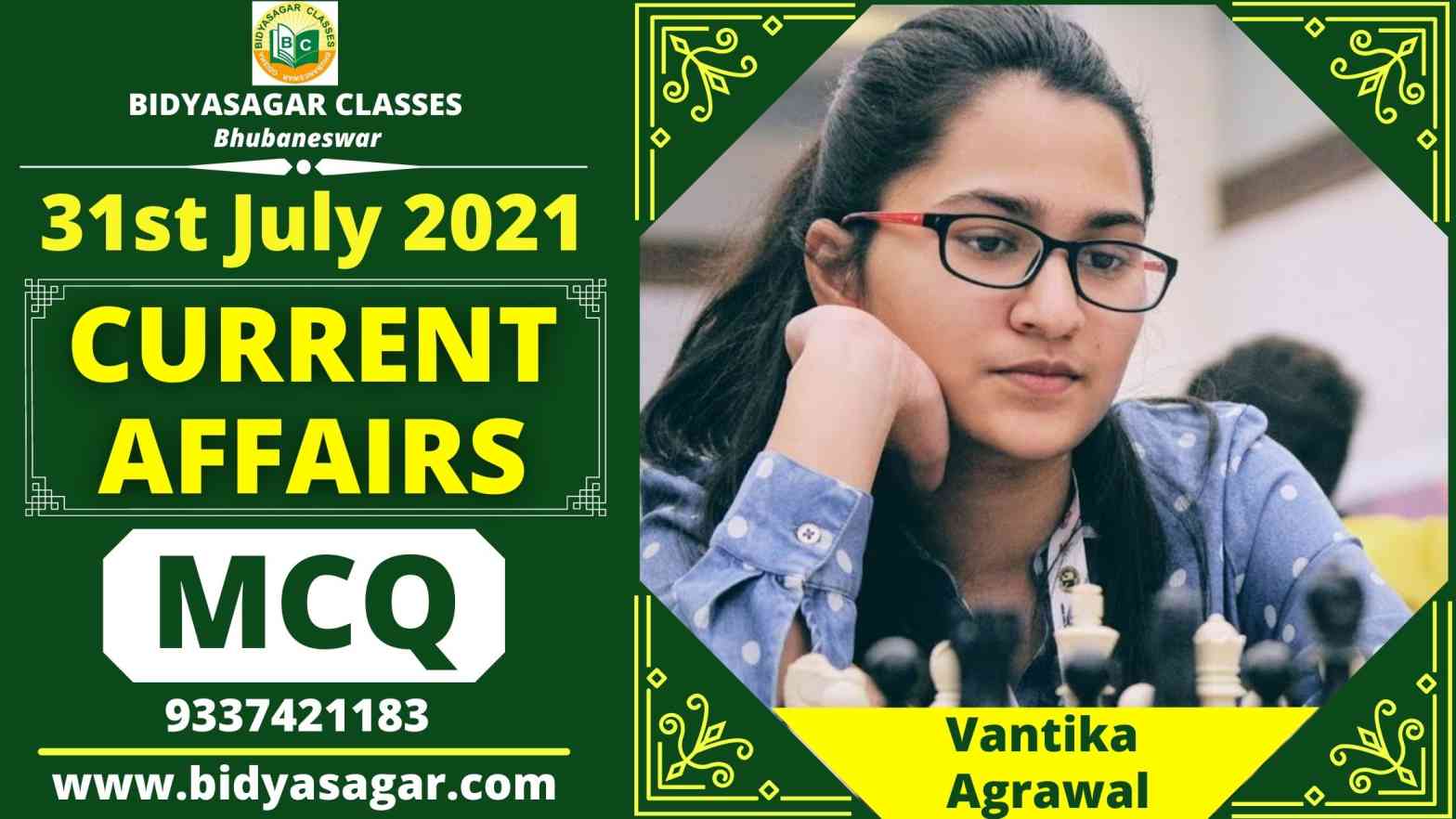 In this article, we will discuss MCQ on important current affairs of 31st July 2021 and their answers with explanations.

1. How many Tiger Reserves have received the accreditation of the Global Conservation Assured Tiger Standards (CA|TS) on the occasion of International Tiger Day 2021?
A) 14
B) 18
C) 20
D) 25
2. The World Ranger Day is observed on which day of the year annually?
A) 29 July
B) 31 July
C) 28 July
D) 30 July
3. For the first time, the Geographical Indications (GI) item ‘Raja Mircha’ (King Chilli) has been exported to London. The King Chilli is GI-tagged item of which state?
A) Haryana
B) Jammu & Kashmir
C) Kerala
D) Nagaland
4. Guido Bellido has been appointed as the new Prime Minister of which country?
A) Spain
B) Moscow
C) Peru
D) Cuba
5. Mike Hendrick who has passed away recently was the former cricket player of which country?
A) England
B) Australia
C) South Africa
D) New Zealand
6. The bilateral maritime exercise INDRA NAVY 2021 was held between Indian and Russian Navy in Baltic Sea. Which edition of the biennial exercise was this?
A) 18th
B) 12th
C) 9th
D) 15th
7. The International Day of Friendship is observed every year on____________
A) July 28
B) July 29
C) July 31
D) July 30
8. Which technology company has tied with the CBSE and Ministry of Education to launch ‘AI For All’ initiative?
A) Intel
B) Tata Consultancy Services
C) Microsoft
D) IBM
9. The All India Chess Federation (AICF) had recently organised the inaugural National women online chess championship.Who is the winner of the title?
A) Srija Seshadri
B) Arpita Mukherjee
C) Vantika Agarwal
D) Soumya Swaminathan
10. The 2021 India-Indonesia CORPAT which took place in July 2021 was which edition of the biannual event?
A) 42nd
B) 36th
C) 51st
D) 60th
11. Bhoot Jolokia chillies from Nagaland exported to ______ for the first time.
(a) Beijing
(b) Berlin
(c) New York
(d) London
12. In which education sector the central government has announced 27 percent reservation for OBCs and 10 percent reservation for EWS?
A. Technology Education
B. Science Education
C. Medical Education
D. Basic Education
13. How many tiger reserves have been given CA-TS recognition by the central government recently?
A. 7 Tiger Reserve
B. 14 Tiger Reserve
C. 20 Tiger Reserve
D. 25 Tiger Reserve
14. NABARD has approved Rs 445.89 crore for drinking water projects in the districts of which state?
A. Kerala
B. Gujarat
C. Punjab
D. Bihar
15. How many Cities have been awarded the prestigious title of 11 Cycling Pioneers of the country by the Government of India?
A. 5 Cities
B. 7 Cities
C. 11 Cities
D. 15 Cities
16. Which physiological parameter monitoring system “Covid Beep” has been launched by India?
A. First
B. Third
C. Fourth
D. Seventh
17. Recently who has launched Secured Logistics Document Exchange?
A. NITI Aayog
B. Planning Commission
C. Central Government
D. Supremecourt
18. In which of the following countries the world’s largest star sapphire cluster has accidentally been found?
A. Bangladesh
B. Sri Lanka
C. Philippines
D. Bhutan
19. Which country has registered the world’s first cheap and effective new drug for hepatitis C?
A. America
B. Maldives
C. China
D. Malaysia
20. Former England and Derbyshire bowler, ________ has passed away recently.
(a) Ben Aitchison
(b) Albert Alderman
(c) Paul Aldred
(d) Mike Hendrick

1. A
From India, 14 tiger reserves have received the accreditation of the Global Conservation Assured Tiger Standards (CA|TS), on the occasion of International Tiger Day on July 29, 2021.
2. B
World Ranger Day is celebrated every year on 31 July.
3. D
A batch of ‘Raja Mircha,’ also known as king chili, from Nagaland was exported to London through Guwahati by air for the first time on July 28, 2021, giving a big boost to exports of Geographical Indications (GI) items from the north-eastern region.
4. C
The newly sworn-in President of Peru, Pedro Castillo had appointed Guido Bellido, as the new prime minister of the country on July 29, 2021.
5. A
Former England fast bowler Mike Hendrick has passed away, due to health-related issues. He was 72 years of age.
6. B
The 12th edition of the biennial bilateral maritime exercise INDRA NAVY, between the Indian Navy and the Russian Navy was held in the Baltic Sea from 28 to 29 July 2021.
7. D
International Day of Friendship (World Friendship Day) takes place on July 30 every year to reserve a day for celebrating friendships and the exchange of gifts between friends.
8. A
Chipmaker company Intel has collaborated with the Central Board of Secondary Education (CBSE) and the Ministry of Education to launch the initiative called ‘AI For All’ with the purpose of building awareness and basic understanding of artificial intelligence (AI) among everyone in India.
9. C
In Chess, Vantika Agarwal of Delhi won the inaugural National women’s online chess championship title organized by the All India Chess Federation (AICF) from July 26-28, 2021.
10. B
The 36th edition of CORPAT between India and Indonesia is being held on 30 and 31 July 2021, in the Indian Ocean region. The Indian Naval Ship (INS) Saryu, an indigenously built Offshore Patrol Vessel and Indonesian Naval Ship KRI Bung Tomo is undertaking coordinated patrol (CORPAT).
11. D
A consignment of ‘Raja Mircha’, also referred to as King Chilli or Bhoot Jolokia, from Nagaland, has been exported to London for the first time.
12. C
The Central Government has recently announced 27 percent reservation for Other Backward Classes (OBC) and 10 percent for Economically Backward (EWS) category in Medical Education. The government has approved all India quota seats for undergraduate and post-graduate medical and dental courses. About 5,550 students will benefit from this decision of the government.
13. B
The Central Government has recently given CA-TS recognition to 14 tiger reserves of the country. These include Manas Tiger Reserve, Kaziranga Tiger Reserve, and Orang Tiger Reserve, Satpura Tiger Reserve, Kanha Tiger Reserve, and Panna Tiger Reserve in Madhya Pradesh. This CA-TS establishes best practices and norms for tiger management.
14. C
National Bank for Agriculture and Rural Development (NABARD) recently approved Rs 445.89 crore for drinking water projects under Nidhi Rural Infrastructure Development in Ferozepur, Fazilka, Hoshiarpur, and Rupnagar districts of Punjab. has given. Under this project, it has been planned to provide 70 liters of potable drinking water per person per day to the consumer through the domestic tap.
15. C
Recently 11 Cities of the country (Bengaluru, Bhubaneshwar, Chandigarh, Kohima, Nagpur, New Town Kolkata, Pimpri Chinchwad, Rajkot, Surat, Vadodara, and Warangal) have been declared by the Government of India. Has been awarded the prestigious title of Cycling Pioneers. Out of 25 Cities of the country, 11 Cities have been selected. Each of whom will be given a prize of Rs 1 crore.
16. A
Recently India’s first physiological parameter monitoring system “Covid Beep” has been launched. This is the first cost-effective system of the indigenously manufactured wireless physiological parameter monitoring system.
17. C
The Central Government has recently launched Secured Logistics Document Exchange to reduce logistics cost, improve logistics efficiency and sustainability and promote multi-modality in a big way. Also, a calculator for greenhouse gas emissions has also been launched.
18. B
The world’s largest star sapphire cluster has recently been accidentally found in the back of a house in the gem-rich area of Ratnapura, Sri Lanka. The new rock found has been named ‘Serendipity Sapphire’. The name Ratnapura means the city of gems and is also known as the gem capital of Sri Lanka.
19. D
The country of Malaysia has recently registered the world’s first cheap and effective new drug for Hepatitis C. This new drug offers hope of accessible treatment for millions of people around the world who are suffering from this disease. Hepatitis C is also called the silent killer. A medicine named Ravidasvir has been approved for use in the month of June along with an existing medicine named Sofosbuvir.
20. D
Former England and Derbyshire bowler, Mike Hendrick has passed away. He played a major role in two of England’s Ashes-series victories and took 87 wickets in 30 Tests for his country between 1974 and 1981.