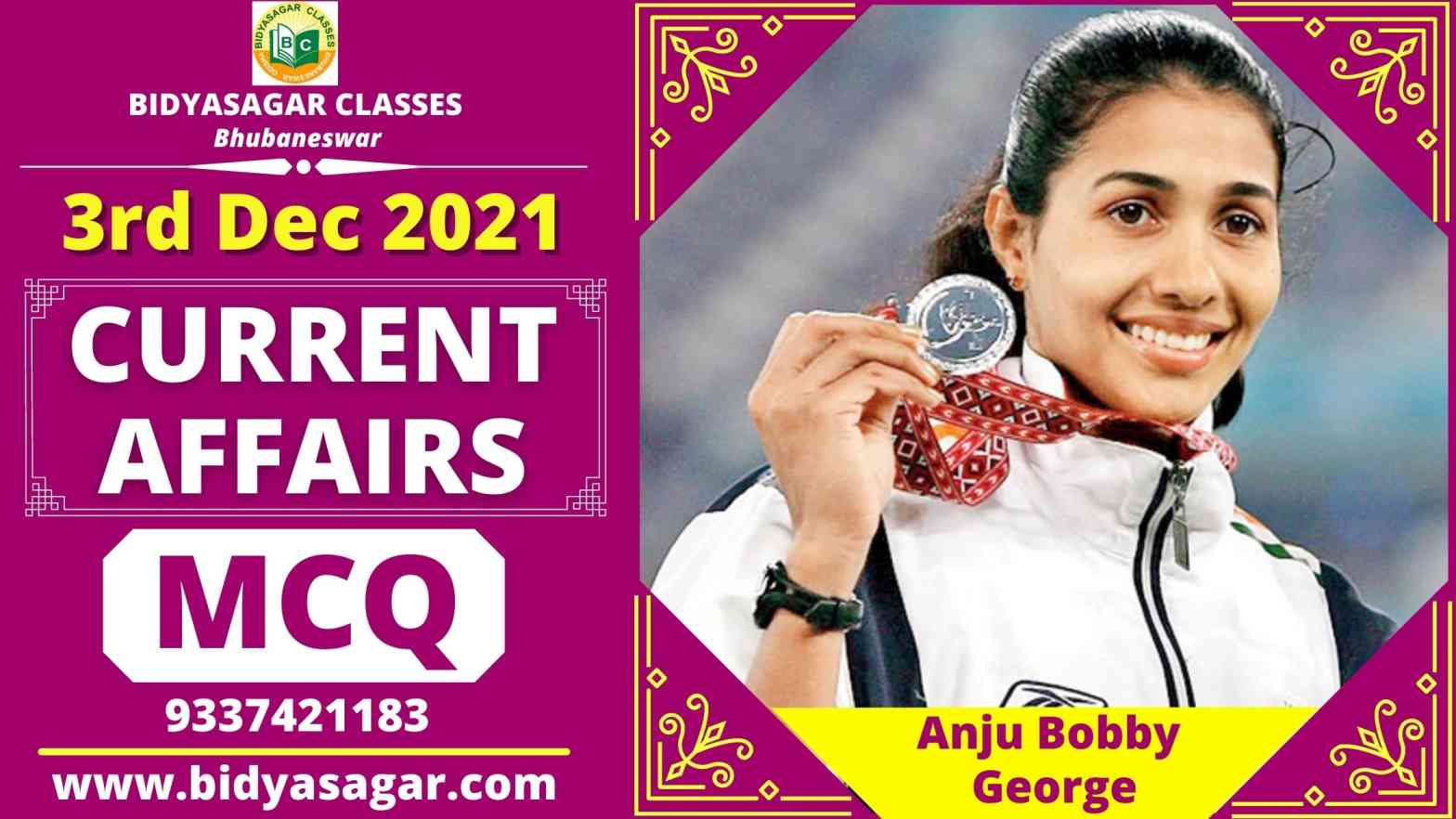 In this article, we will discuss MCQ on important current affairs of 3rd December 2021 and their answers with explanations.

1. Which Indian state has reported India’s first two cases of Omicron COVID variant?
a) Kerala
b) Tamil Nadu
c) Karnataka
d) Rajasthan
2. Which year did the tragic Bhopal gas disaster occur?
a) 1981
b) 1984
c) 1990
d) 1991
3. During a Solar Eclipse, what comes in front of the Sun and blocks its light?
a) Earth
b) Moon
c) Venus
d) Mars
4. Which former Indian President’s birth anniversary is observed on December 3rd?
a) Rajendra Prasad
b) Sarvepalli Radhakrishnan
c) V. V. Giri
d) K. R. Narayanan
5. When will the last Solar Eclipse of 2021 occur?
a) December 4th
b) December 5th
c) December 7th
d) December 9th
6. Who has topped the Fortune India 50 Most Powerful Women list?
a) Nirmala Sitharaman
b) Nita Ambani
c) Gita Gopinath
d) Priyanka Chopra
7. When is the International Day of Persons with Disabilities observed?
a) December 3rd
b) December 4th
c) December 5th
d) December 6th
8. Who will be appointed as IMF’s First Deputy Managing Director?
a) Gita Gopinath
b) Suchitra Ella
c) Soumya Swaminathan
d) Kiran Mazumdar-Shaw
9. Which athlete has been honored with the “Woman of the Year” award by World Athletics?
a) Geeta Phogat
b) Anju Bobby George
c) Dutee Chandra
d) Suman Bajaj
10. Mirzapur’s famous actor “Lalit” has passed away recently at the age of?
a) 32 years
b) 42 years
c) 52 years
d) 62 years
11. Which of the following state government has recently withdrawn the Char Dham Devasthanam Management Act?
a) Government of Kerala
b) Government of Punjab
c) Government of Maharashtra
d) Government of Uttarakhand
12. In which city of Uttar Pradesh has Shri Amit Shah recently laid the foundation stone of Maa Shakumbhari University?
a) Jhansi
b) Agra
c) Saharanpur
d) Hamirpur
13. Which tragedy day is celebrated in India on 3rd December?
a) Bhopal Gas Scandal Day
b) Aniyoga Movement Day
c) Science Day
d) Dandi Yatra Day
14. “Magdalena Anderson” has recently become the first female Prime Minister of which country?
a) Austria
b) Sweden
c) Spain
d) China

1. C
Two cases of Omicron were detected in Karnataka, India on December 2, 2021. One of the two patients is a 66-year-old male, who is fully vaccinated and had returned from South Africa via Dubai. The second infected person is a 46-year-old male, according to Bruhat Bengaluru Mahanagara Palike (BBMP).
2. B
The Bhopal gas tragedy had taken place on the night of 2–3 December 1984 when there was a gas leak at the Union Carbide India Limited (UCIL) pesticide plant in Bhopal, Madhya Pradesh. The disaster is considered as one of the world’s worst industrial disasters, as over 500,000 people were exposed to methyl isocyanate (MIC) gas.
3. B
A solar eclipse occurs when the Moon comes between the Sun and the Earth and partially or fully blocks the Sun’s light in some areas and casts a shadow on the Earth. A total solar eclipse occurs when the Sun, Moon, and Earth are in a direct line.
4. A
The birth anniversary of India’s first President, Dr. Rajendra Prasad is observed on December 3rd. The former President was born on December 3, 1884. He was in office from 1950 to 1962. Prime Minister Narendra Modi paid tribute to the first President and Bharat Ratna Rajendra Prasad on his birth anniversary.
5. A
The last Solar Eclipse of 2021 will occur on December 4, 2021. The Solar Eclipse will not be visible from India but people can watch it through NASA live stream. The total solar eclipse will be visible only from Antarctica while some other parts in the southern region will be able to witness a partial Solar Eclipse.
6. A
Finance Nirmala Sitharaman is ranked at the top on Fortune India 50 Most Powerful Women list while Reliance’s Nita Ambani has grabbed second place. WHO Chief Scientist Soumya Swaminathan is ranked third followed by Kiran Mazumdar-Shaw at the fourth place, Biocon Limited’s founder.
7. B
The International Day of Persons with Disabilities 2021 is observed every year globally on December 3. The day is dedicated to the people who have been living with disabilities of any form and aims to bring attention to the day-to-day challenges that they face.
8. A
The Chief Economist of the International Monetary Fund (IMF), Gita Gopinath will take up a new role as the First Deputy Managing Director of IMF. Gopinath will be the second-rank official at IMF. She will replace the First Deputy Managing Director Geoffrey Okamoto who plans on leaving the IMF early in 2022.
9. B
Anju Bobby George, who inspired women with efforts to take the sport forward in India, won a bronze medal in the long jump of the 2003 World Athletics Championships.
10. A
Mirzapur’s famous actor “Lalit” has recently passed away at the age of 32. His real name was Brahma Mishra. Brahma Mishra, who played the role of ‘Lalit’ in the webseries Mirzapur and a special friend of Munna Bhaiya, passed away. Brahma Mishra had worked in many films and serials, but he got recognition from the side role of Mirzapur-2.
11. D
The Government of Uttarakhand has recently withdrawn the Char Dham Devasthanam Management Act. This act was made law by the Uttarakhand state assembly in 2019. Which formed a board called Uttarakhand Char Dham Devasthanam Board. The board then brought the Char Dham and 49 other temples of Kedarnath, Badrinath, Gangotri and Yamunotri under its ambit.
12. C
Recently, Union Home and Cooperation Minister Shri Amit Shah has laid the foundation stone of Maa Shakumbhari University in Saharanpur city of Uttar Pradesh. From Maa Shakumbhari University, not only will there be arrangements for education and writing for the youth of three adjoining districts, but they will also be able to get higher education near their home.
13. A
Bhopal Gas Case Day is celebrated on 3rd December in India. On this day on December 3, 1984, a terrible industrial accident took place. A poisonous gas leak occurred from the factory of a company named Union Carbide in Bhopal, which killed more than 15000 people and many people were also victims of various types of physical disabilities to blindness.
14. B