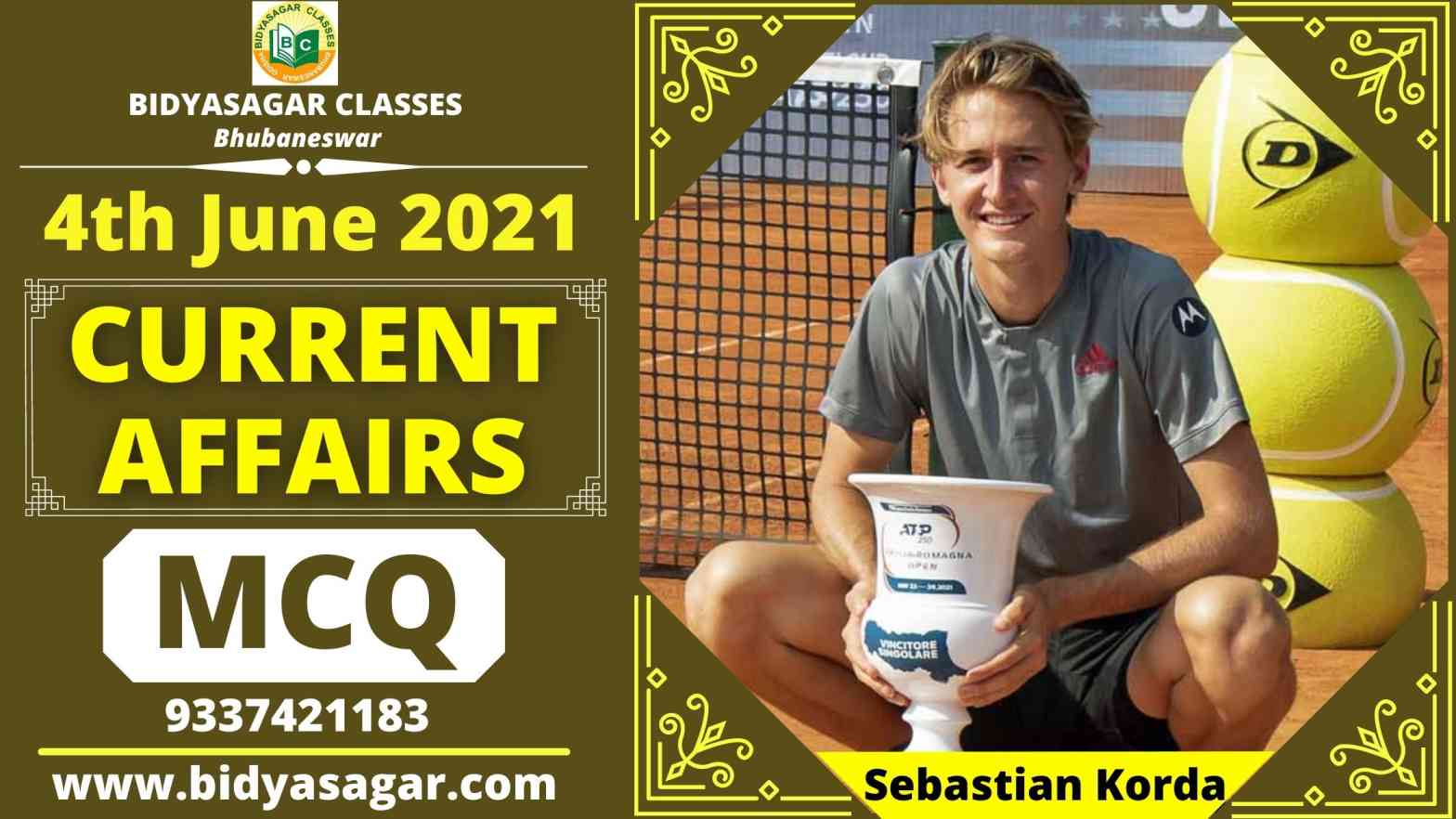 In this article, we will discuss MCQ on important current affairs of 4th June 2021 and their answers with explanations.

1. Who has been elected as the new President of Israel?

3. Who has been appointed as the CFO of Canara Bank?

4. Who announced the integration of the e-GOPALA app with the UMANG Platform?

8. Jammu & Kashmir government signs an MoU with ________ for transportation of agri-produce.

9. What was the name of the largest warship of Iran that sank recently after catching fire?

10. Which country has been suspended recently by the African Union?

12. Lieutenant Gen Pradeep Chandran Nair has been appointed as the Director-General of which of India’s oldest paramilitary forces?

13. The central government has recently tied up with Biological-E, a corona vaccine manufacturer based in which city, to buy 300 million doses?

14. Which of the following state government has recently launched a scheme named Ankur?

A) Government of Kerala

B) Government of Gujarat

15. Which retired Supreme Court Justice has recently been appointed as the chairman of the National Human Rights Commission?

16. Which program has recently been launched by Narendra Singh Tomar to promote the production of oilseeds and pulses?

17. Iranian Navy’s largest warship “Kharg” has recently sunk in which Gulf after a fire?

A) Bay of Bengal

B) Gulf of Oman

18. Which day is celebrated around the world on 4th May?

19. Hashmatullah Shahidi has been appointed as the new ODI and Test captain of which cricket team recently?

20. The Union Cabinet has approved the MoC between which country for sustainable urban development?

Issac Herzog has been elected as the new President of Israel. He is a veteran politician belonging to a prominent Israeli scion. He has served as the leader of Israel’s Labor Party.

Union Cabinet has approved MoU between India and Argentina in the field of mineral resources. The MoU will be signed between the Ministry of Mines of the Indian Government and the Secretariat of Mining Policy of the Ministry of Productive Development of the Argentine Republic.

SK Majumdar has been appointed as the Chief Financial Officer (CFO) of Canara Bank. He has been serving Canara Bank since January 2000.

Union Minister of Fisheries, Animal Husbandry & Dairying, Giriraj Singh has announced the integration of the e-GOPALA (Generation of wealth through Productive Livestock) app with Unified Mobile Application for New-age Governance. It was announced on the occasion of World Milk Day observed in 1st June.

Sebastian Korda has won the Emilia-Romagna Open Tennis Open 2021 Men’s title. With this feat he has become the 1st American to win a Male Championship in the European Clay Court in the past 10 years.

The largest warship of Iran was called Kharg that sank recently after catching fire. The warship sank in the Gulf of Oman during a training session.

African Union has suspended the membership of Mali citing the 2nd military coup and detention of its President and Prime Minister in the past nine months. The African Union has warned Mali regarding the ongoing political crisis in the country.

The government thinks tank NITI Aayog has recently released the Sustainable Development Goals Index third edition. This was first launched in the year 2018 in December. Kerala has topped the Sustainable Development Goals Index released this year with a score of 75. Kerala is followed by Himachal Pradesh and Tamil Nadu with a score of 74.

The Central Government has recently signed an agreement to buy 300 million doses from Biological-E, a corona vaccine manufacturer based in Hyderabad. All these 30 crore doses will be made between August and December 2021. For which the government has made an advance payment of Rs 1500 crore to the company.

The Government of Madhya Pradesh recently launched a scheme named Ankur under which citizens will be honored for planting trees during the monsoon. Citizens participating in this program will be honored with Pranavayu Puraskar for ensuring public participation.

Retired Supreme Court Justice Arun Kumar Mishra has recently been appointed as the chairman of the National Human Rights Commission. While Justice Mahesh Kumar Mittal and former IB Director Dr. Rajeev Jain have been made members of the commission.

Union Agriculture Minister Narendra Singh Tomar has recently launched “Mini-Kit” program to promote the production of oilseeds and pulses. Under this program, the government will provide mini kits to the farmers, which will contain seeds of high yielding varieties as well as chemicals to treat the seeds.

Iranian Navy’s largest warship “Kharg” has recently sunk in the Gulf of Oman after a fire. The reason for the fire in this warship is not known. The warship is named after Kharg Island, which is Iran’s main oil terminal.

The Union Cabinet has approved the MoC signed between Japan for Sustainable Urban Development. This is expected to create employment opportunities from MoC. The main objective of this MoC is to strengthen technical cooperation in the field of sustainable urban development between the two countries.