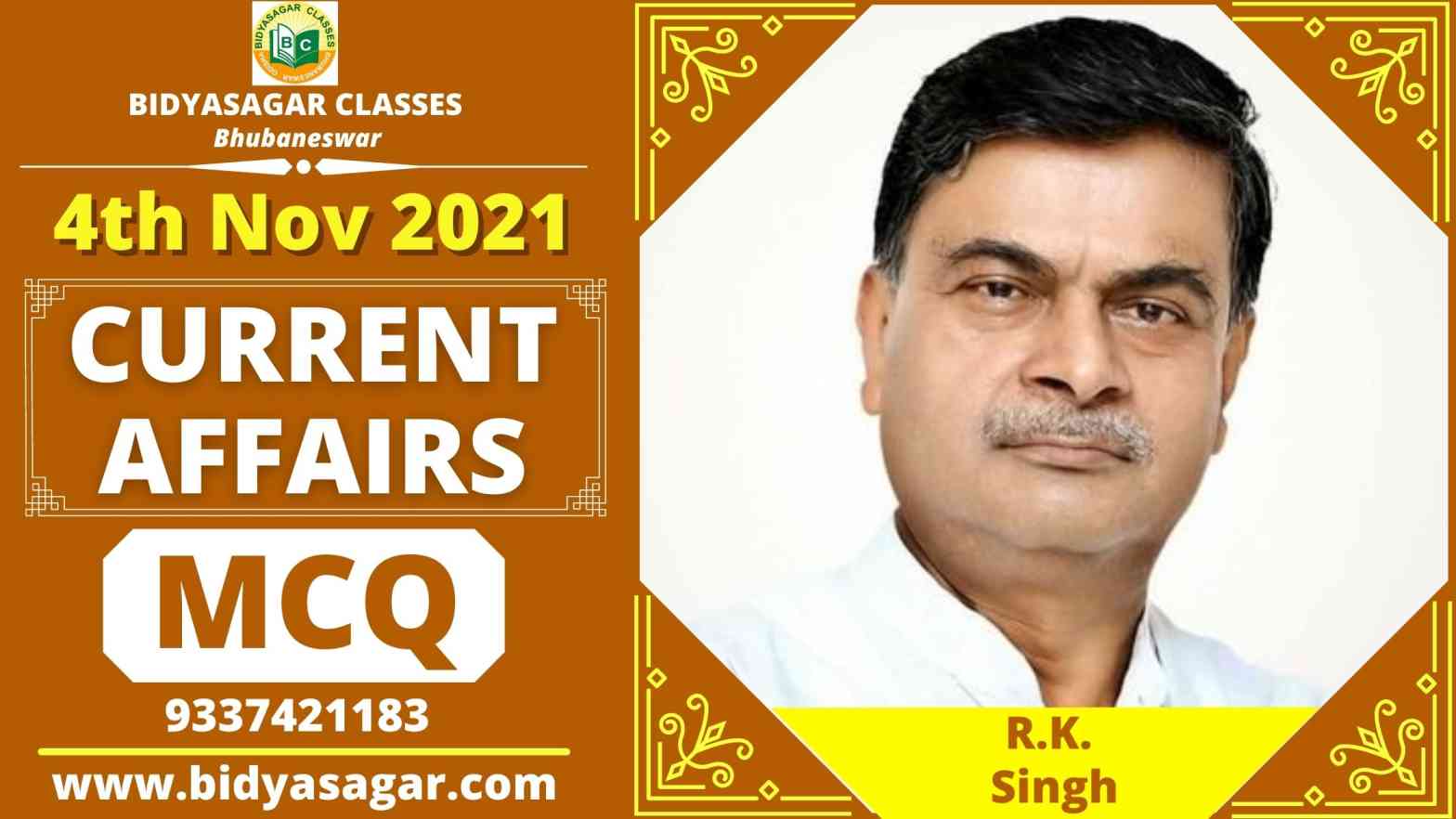 In this article, we will discuss MCQ on important current affairs of 4th November 2021 and their answers with explanations.

1. RBI has recently appointed _____ bank as an Agency Bank to conduct government business.
a) Federal Bank
b) Indian Overseas Bank
c) Bandhan Bank
d) State Bank of India
2. Which state’s CM has launched the ‘Uttam Beej portal’?
a) Karnataka
b) Madhya Pradesh
c) Uttar Pradesh
d) Chandigarh
3. Which university won Maulana Abul Kalam Azad (MAKA) Trophy 2021?
a) Panjab University, Chandigarh
b) Punjabi University, Patiala
c) Guru Nanak Dev University Amritsar
d) None Of The Above
4. Air Force of India and which country conducts the Joint Exercises?
a) France
b) Turkey
c) Egypt
d) Italy
5. How many sportspersons have been selected for the Major Dhyan Chand Khel Ratna Award 2021?
a) 7
b) 12
c) 17
d) 8
6. Ministry of Rural Development signs MoU with ____.
a) Flipkart
b) Amazon
c) Both a & b
d) None of the above
7. Who is the new Director-General of the Federation of Indian Chambers of Commerce & Industry (FICCI)?
a) Shyam Srinivasan
b) Arun Chawla
c) Prashant Kumar
d) Shaktikanta Das
8. Prime Minister Modi visits Kedarnath Temple it is located in which state?
a) Kerala
b) Karnataka
c) Uttarakhand
d) Assam
9. West Indies Dwayne Bravo announces retirement from which sport?
a) Swimming
b) Wrestling
c) Hockey
d) International Cricket
10. What is the Theme of Diwali 2021?
a) All Faith
b) Brave
c) Defeat Evil
d) None of the above
11. Which of the following social media company has decided to discontinue the face recognition system “Face Recognition System”?
a) Facebook
b) Snapchat
c) Twitter
d) Tinder
12. Who among the following has recently cleared acquisition proposals worth Rs 7,965 crore for the modernization and operational needs of the armed forces?
a) NITI Aayog
b) Supremecourt
c) Defence Acquisition Council
d) Ministry of Tribals
13. Which state has been invited to participate in the Virtually International Seed Conference organized by the Food and Agriculture Organization?
a) Ladakh
b) Telangana
c) Karnataka
d) Gujarat
14. Name the Minister of Renewable Energy, who has recently inaugurated the Diversion of Marusudar River in Pakal Dul Hydroelectric Project?
a) Hardeep Singh Puri
b) Rajnath Singh
c) Nirmala Sitharaman
d) RK Lion
15. Union Home Minister Amit Shah has launched “Ayushman CAPF Health Card” for which of the following?
a) Central Armed Police Forces personnel
b) Judge
c) Railway Employees
d) all
16. Recently which country has approved the Pfizer vaccine for children aged 5 to 11?
a) China
b) Cuba
c) Israel
d) America
17. Which player has topped the recently released ICC T20 batting rankings with 834 ratings?
a) Kevin William
b) Babar Azam
c) Virat Kohli
d) Rohit Sharma
18. Which of these countries has recently announced a ban on the use of foreign currencies?
a) Pakistan
b) Afghanistan
c) Japan
d) China

1. C
The Reserve Bank of India has now appointed Bandhan Bank as an Agency Bank of the RBI to conduct government business. Bandhan Bank will now be authorised to handle transactions related to GST, VAT and the collection of state taxes. Aside from that, it can also look after the collection of stamp duty and pension payments on behalf of central and state governments, among others.
2. D
Fulfilling the farmer’s expectations, Haryana Chief Minister, Sh. Manohar Lal launched “Uttam Beej Portal” in Chandigarh. The portal will benefit lakhs of farmers of the State. This portal will provide transparency in the seed production programme arranged by Government as well as private seed producing agencies and will ensure a better quality of certified seed.
3. A
The Maulana Abul Kalam Azad Trophy, abbreviated as MAKA Trophy is a sports honour of the Republic of India. The award is named after Abul Kalam Azad commonly referred to as Maulana Azad, one of the senior leaders of the Indian independence movement. It is awarded annually by the Ministry of Youth Affairs and Sports.
4. C
Air forces of India and Egypt conducted a two-day exercise at the latter’s El Berigat airbase to enhance mutual understanding and share the operational experience. The exercise is called ‘Desert Warrior’. In December 2019, then Air Chief Marshal RKS Bhadauria had visited Egypt and met Air Marshal Mohamed Abbas Helmy, the Commander-in-Chief of Egypt Air Force, to boost cooperation between the two services.
5. B
Major Dhyan Chand Khel Ratna Award will be given to 12 sportspersons including Neeraj Chopra, who won gold for India at the 2020 Tokyo Olympics. National Sports Award will be given in New Delhi on November 13.
6. A
Ministry of Rural Development signs MoU with Flipkart. Extending support towards the Prime Minister’s vision of ‘Atmanirbhar Bharat’, Flipkart joins hands with Govt of India’s National Rural Livelihood Mission. Rural products from SHGs have a huge potential for acceptance among the masses in India and abroad.
7. B
The industry chamber Federation of Indian Chambers of Commerce & Industry (FICCI) named Arun Chawla as its new director-general. He will assume charge with immediate effect. He joined FICCI in 2011 and is currently the deputy secretary-general of the chamber.
8. C
Preparations underway at Kedarnath shrine in Uttarakhand ahead of PM Narendra Modi’s visit. PM will offer prayers at the shrine, inaugurate Adi Shankaracharya Samadhi & unveil their statue.
9. D
West Indies all-rounder Dwayne Bravo confirmed that he will retire from international cricket at the end of their T20 World Cup campaign that concludes with the match against Australia. The defending champions were knocked out of the ongoing tournament after defeating Sri Lanka.
10. A
The main theme of the festival relates to “All Faith” as it symbolizes the victory of light over darkness, knowledge over ignorance, good over evil and hope over despair. To some, Deepavali is the counterpart of the New Year celebration in the Western region of the world.
11. A
The social media company Facebook has recently decided to shut down the face recognition system “Face Recognition System”. Facebook will delete the faceprints of over a billion people.
12. C
The Defense Acquisition Council has recently cleared acquisition proposals worth Rs 7,965 crore for the modernization and operational needs of the armed forces. All these proposals are under the “Make in India” initiative by which the focus is on design, development and manufacturing in India.
13. B
Telangana State has been invited to participate in the Virtually International Seed Conference organized by the Food and Agriculture Organization. This conference will be held in Rome.
14. D
Union Power, New and Renewable Energy Minister R.K. Singh inaugurated This project will help in meeting the target of 450 GW of renewable energy by 2030.
15. A
Union Home Minister Amit Shah has recently given “Ayushman CAPF Health Card” to the personnel of Central Armed Police Forces. This will benefit 35 lakh CAPF personnel and their family members. This plan will be available across India by the end of December.
16. D
America has approved the Pfizer vaccine for children aged 5 to 11 years to protect children from corona. This Pfizer vaccine has been approved by the US Food and Drug Administration. With this approval, Pfizer has become the first vaccine to be administered to children in America.
17. B
With 834 ratings in the recently released ICC T20 Batting Rankings, Pakistan captain Babar Azam has surpassed England batsman David Malan in the first place, while captain Virat Kohli 5th and opener Batsman KL Rahul is in 8th place.
18. B
After the Taliban regime, recently the Taliban in Afghanistan has announced a ban on the use of foreign currencies. While at the same time the Afghan currency is devaluing rapidly. At present the country of Afghanistan is on the verge of shortage of cash and starvation.