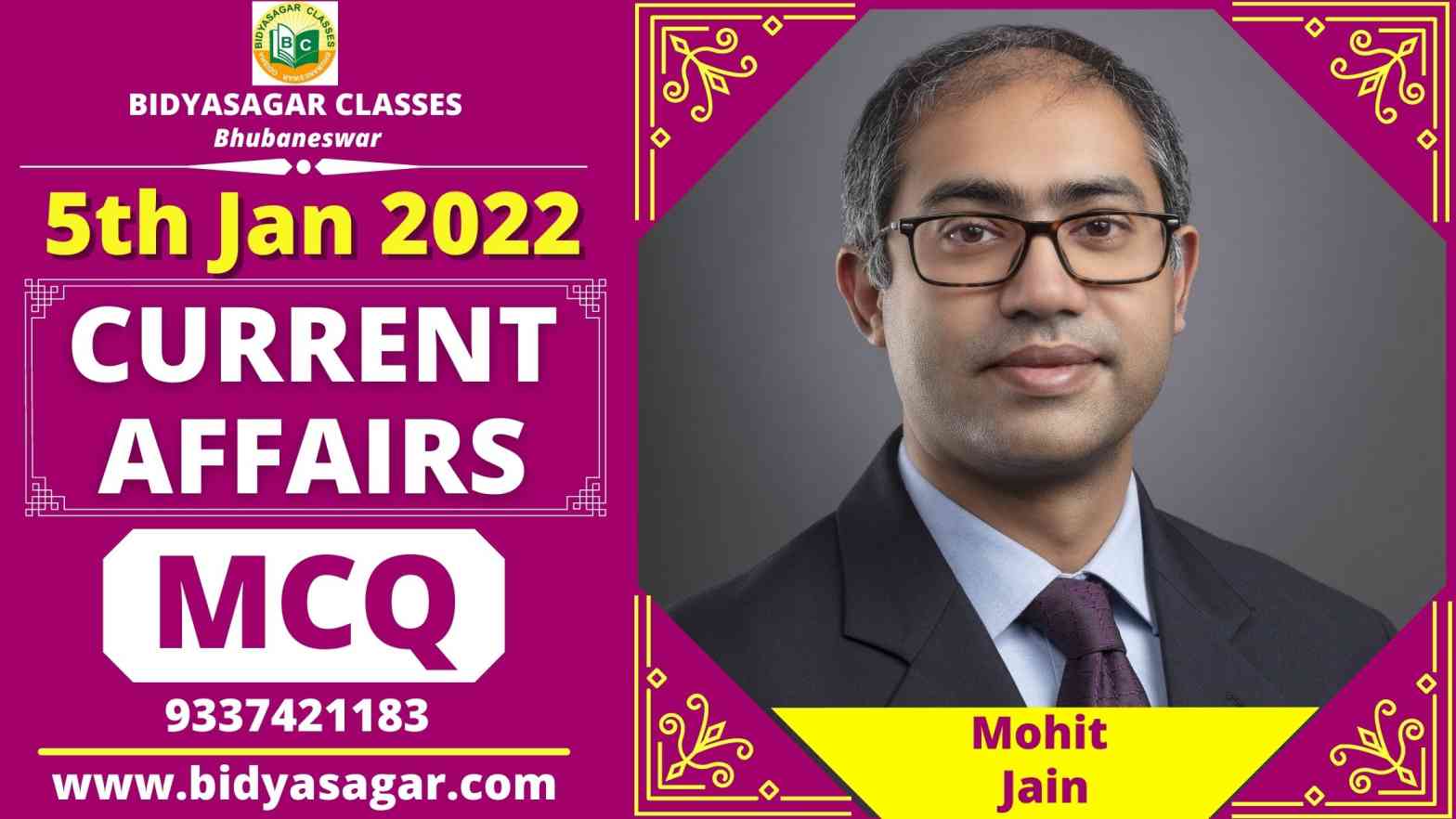 In this article, we will discuss MCQ on important current affairs of 5th January 2022 and their answers with explanations.

1. What is the interest rate applicable on the Public Provident Fund Account (PPF)?
(a) 7.7%
(b) 7.5%
(c) 7.1%
(d) 7.3%
2. What was the profession of Vijay Galani who has passed away recently?
(a) Film Producer
(b) Lyricist
(c) Musician
(d) Scriptwriter
3. Which country has taken over the rotating presidency of the Council of the European Union for six months beginning January 2022?
(a) Germany
(b) Italy
(c) Netherlands
(d) France
4. What percent stake will be acquired by NTPC in Power Exchange of India Ltd (PXIL)?
(a) 3%
(b) 6%
(c) 4%
(d) 5%
5. Cricket all-rounder Mohammad Hafeez has announced his retirement from international cricket for which country?
(a) Afghanistan
(b) South Africa
(c) Pakistan
(d) West Indies
6. Who among the following is the only female representative in the parliamentary standing committee constituted to examine “The Prohibition of Child Marriage (Amendment) Bill, 2021?
(a) Anjana Kumari
(b) Sushmita Dev
(c) Sarojini Singh
(d) Vimla Kashyap
7. Which state having the highest number of villages as ODF plus under the Swachh Bharat Mission (Gramin) phase II programme?
(a) Gujarat
(b) Haryana
(c) Punjab
(d) Telangana
8. Which electric vehicle company’s autopilot team was hired Indian-origin Ashok Elluswamy as it’s first employee?
(a) Rivian
(b) Lucid Motors
(c) NIO
(d) Tesla
9. SEBI’s market data advisory committee will now be chaired by ______.
(a) Prithvi Haldea
(b) S Sahoo
(c) Anuj Kumar
(d) Reena Garg
10. Which of the following nation has successfully conducted a series of tests of the hypersonic Zirkon missile recently?
(a) Russia
(b) Japan
(c) China
(d) USA
11. Which of the following airline has appointed Vinod Kannan as the chief executive officer?
(a) Emirates
(b) Indigo
(c) Vistara
(d) AirAsia
12. Information Technology Minister Ashwini Vaishnaw has launched the India Semiconductor Mission (ISM). The fiscal support of up to ________ percent of the project.
(a) 30%
(b) 40%
(c) 50%
(d) 60%
13. What is the theme of Naval Exercise Milan 2022?
(a) Synergy Across the Seas
(b) Camaraderie, cohesion and collaboration
(c) In Pursuit of Maritime Good Order
(d) Regional cooperation in recent years
14. Name the Former British Prime Minister, to be appointed as members of the Order of the Garter, England’s oldest and most senior order of chivalry.
(a) John Major
(b) Gordon Brown
(c) David Cameron
(d) Tony Blair
15. Which of the following bank has released the Framework on Offline Digital Payments?
(a) Indian Bank
(b) Union Bank
(c) State Bank Of India
(d) Punjab National Bank
16. VS Pathania has recently taken over as the Director General of which Indian Coast Guard?
(a) 20th Director General
(b) 22nd Director General
(c) 24th Director General
(d) 27th Director General
17. For which of the following water metro project the first battery operated electric boat has been manufactured?
(a) Pune Water Metro Project
(b) Chennai Water Metro Project
(c) Delhi Water Metro Project
(d) Kochi Water Metro Project
18. Prime Minister Narendra Modi has recently announced to lay the foundation stone of Major Dhyan Chand Sports University in which city?
(a) Lucknow
(b) Meerut
(c) Kanpur

1. C
7.1%. is the interest rate applicable on the Public Provident Fund Account (PPF) for 15-Year.
2. A
Bollywood film producer Vijay Galani has passed away due to organ failure. He was in his late 50s. Vijay Galani was suffering from blood cancer and was in London for seeking treatment.
3. D
France has assumed the rotating presidency of the Council of the European Union with effect from January 01, 2022.The country will continue to hold the EU presidency for the next six months till June 30, 2022.
4. D
State-owned power generation company NTPC Ltd. is set to acquire 5 percent equity stake in Power Exchange of India Ltd (PXIL).
5. C
Pakistani all-rounder Mohammad Hafeez has announced his retirement from international cricket on January 03, 2022, to end his career spanning more than 18 years.
6. B
Sushmita Dev was in news recently for being the only female representative in the parliamentary standing committee constituted to examine “The Prohibition of Child Marriage (Amendment) Bill, 2021”.
7. D
Telangana tops other states in the country in having the highest number of villages as ODF plus under the Swachh Bharat Mission (Gramin) phase II programme.
8. D
Tesla founder and CEO Elon Musk, disclosed that Indian-origin Ashok Elluswamy was the first employee to be hired for his electric vehicle company’s Autopilot team.
9. B
SEBI has restructured its advisory committee on market data that recommends policy measures pertaining to areas like securities market data access and privacy. Rejigging its market data advisory committee, Sebi has said the panel will now be chaired by S Sahoo
10. A
Russia had confirmed that the military successfully fired a simultaneous salvo of its Zircon hypersonic missiles. Russia has carried out a number of successful tests of its Zircon hypersonic cruise missile.
11. C
Vinod Kannan took over as the Chief Executive Officer (CEO) of Vistara airline. Kannan replaced Leslie Thng who was the CEO from July 16, 2017 to December 31, 2021.
12. C
The fiscal support of up to 50 percent of the project cost (ceiling of Rs 12,000 crore per fab) will be provided for the scheme for setting up display fabs.
13. B
The theme of this 11th edition of exercise Milan is camaraderie, cohesion and collaboration. This exercise was initiated in 1995 and held biennially and conducted with friendly navies.
14. D
Former British Prime Minister Tony Blair, the Duchess of Cornwall, and Baroness Amos are to be appointed as members of the Order of the Garter, England’s oldest and most senior order of chivalry.
15. C
State Bank of India has recently released a framework for small value offline transactions in digital mode. Accordingly, offline payments can be made using any channel or means such as wallet, mobile device or card.
16. C
V.S. Pathania has recently assumed charge as the 24th Director General of the Indian Coast Guard. VS Pathania In a career spanning over 36 years, Pathania has held many important appointments ashore and ashore.
17. D
The recently built first battery operated electric boat for Kochi Water Metro Project has been given to Kochi Metro Rail Limited. This fully air-conditioned boat is one of the 23 boats being built by Cochin Shipyard for the Rs 747 crore Kochi Water Metro project.
18. B
Prime Minister Narendra Modi has recently announced to lay the foundation stone of Major Dhyan Chand Sports University in Meerut with an estimated cost of about Rs 700 crore. This university will be established in Salwa and Kali villages of Sardhana town of Meerut. The university will have a training capacity of 1080 players, including 540 female and 540 male players.
19. B
France has recently taken over the rotating presidency of the Council of the European Union for 6 months. Who will continue to preside over the European Union until June 30, 2022. France will work to put the continent’s digitization and climate protection at the forefront.
20. B
Vinay Kumar Tripathi, of the 1983 batch of the Indian Railway Service, has recently been appointed as the new Chairman and Chief Executive Officer of the Railway Board. He is currently working as the Chairman, Railway Board, as General Manager, North Eastern Railway.