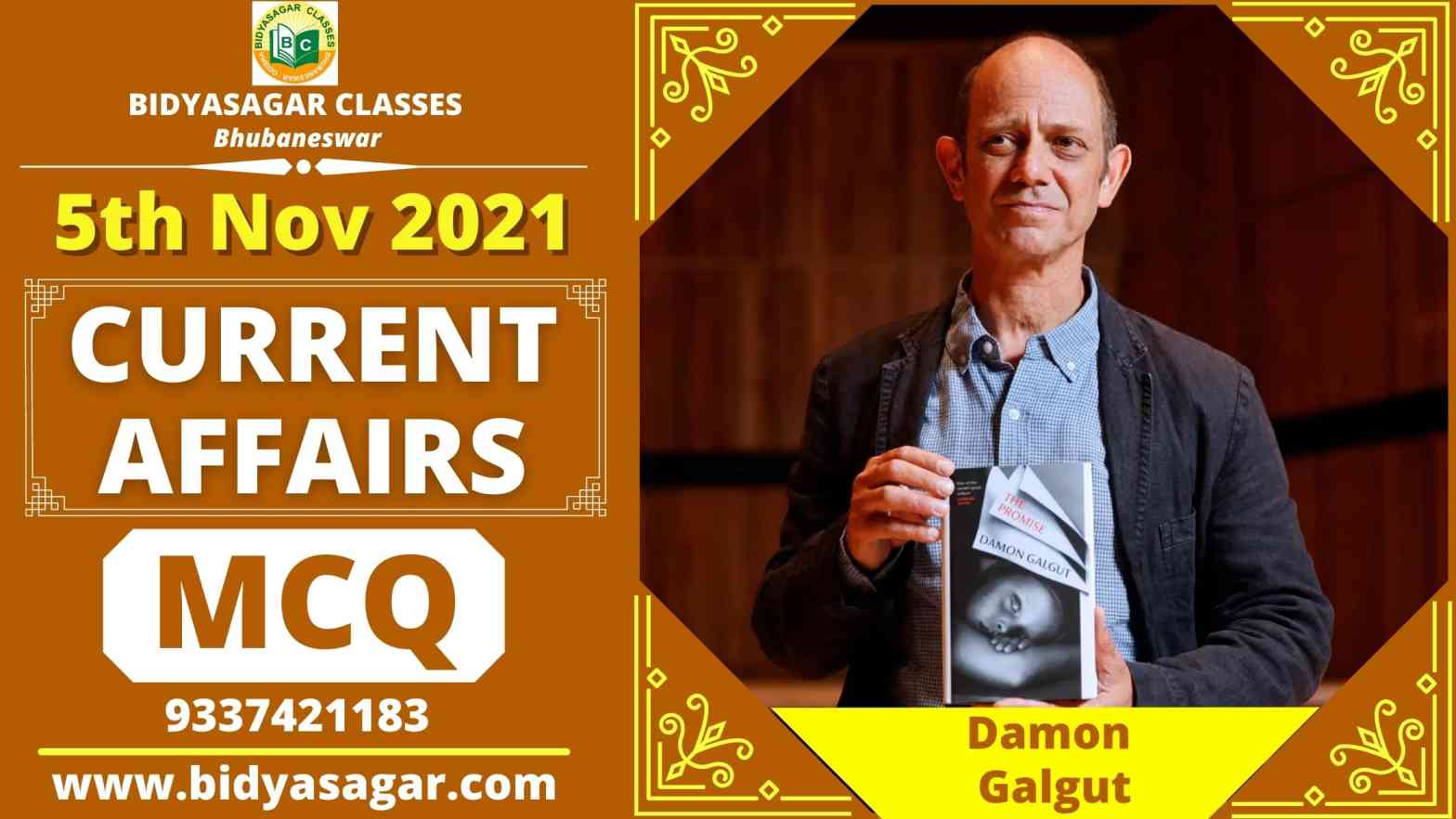 In this article, we will discuss MCQ on important current affairs of 5th November 2021 and their answers with explanations.

1. When is World Tsunami Awareness Day?
a) November 3rd
b) November 4th
c) November 5th
d) November 6th
2. Who has won 2021 Booker Prize?
a) Khaled Hosseini
b) Paulo Coelho
c) Nguyen Phan Que Mai
d) Damon Galgut
3. Which country has become the first one to approve oral Covid pill?
a) US
b) UK
c) Canada
d) India
4. Who has become the seventh male boxer to win a medal at World Boxing Championships?
a) Vikas Krishnan
b) Shiva Thapa
c) Akash Kumar
d) Amit Panghal
5. Senior political leader Subrata Mukherjee passed away on November 4, 2021. He was a part of which political party?
a) TMC
b) INC
c) BJP
d) RJD
6. Which veteran cricketer has announced that he will retire from international cricket after the ongoing T20 World Cup?
a) Dwayne Bravo
b) Kane Williamson
c) Quinton de Kock
d) Aaron Finch
7. Who won Nizami Ganjavi Award?
a) Tedros Ghebreyesus
b) Jim Yong Kim
c) Antonio Guterress
d) Kristalina Georgieva
8. Which company has recently announced the closure of its business from China due to the increasingly challenging business and legal environment?
a) Facebook
b) Twitter
c) Yahoo Inc
d) Google
9. Which of the following ministry and Flipkart have signed MoU to empower local businesses?
a) Ministry of Education
b) Ministry of Sports
c) Ministry of Information and Broadcasting
d) Ministry of Rural Development
10. The Cook Strait separating the North and South islands of which of the following countries has been in news recently?
a) England
b) Ireland
c) New Zealand
d) Australia
11. Which of these state government has recently launched two new schemes?
a) Government of Kerala
b) Gujarat government
c) Government of Maharashtra
d) Government of Karnataka

1. C
World Tsunami Awareness Day is observed every year on November 5, 2021 to raise tsunami awareness and share innovative approaches to risk reduction. In the past 100 years, tsunamis have killed more than 2,60,000 people.
2. D
South African novelist Damon Galgut won the 2021 Booker Prize for his novel ‘The Promise’ on November 3, 2021. It was one of the six shortlisted novels for the Booker Prize and stood out for its artistry and scope.
3. B
The United Kingdom on November 4, 2021, became the first country in the world to approve a potentially game-changing COVID-19 anti-viral pill. It has been jointly developed by the U.S.-based Merck and Ridgeback Biotherapeutics, in a boost to the fight against pandemic.
4. C
Akash Kumar has become the seventh Indian male boxer who won a medal at the World Boxing Championships. He won a bronze medal in the 54-kg category at the 2021 AIBA Men’s World Boxing Championships in Belgrade, Serbia on November 4, 2021.
5. A
West Bengal Minister and senior TMC leader, Subrata Mukherjee passed away at the age of 75 in Kolkata on November 4, 2021. He was an MLA from Ballygunge constituency. He passed away at the age of 75 years after a cardiac arrest.
6. A
The International Cricket Council informed on November 5, 2021 that West Indies all-rounder Dwayne Bravo has confirmed that he will retire at the end of the ICC Men’s T20 World Cup. Bravo said that he will retire from international cricket after the ongoing T20 World Cup as “time has come” to leave the stage after a career he can be proud of.
7. A
World Health Organisation (WHO) Director-General Tedros Ghebreyesus and UN Geneva Office Director-General Tatiana Valovaya were honoured with the Nizami Ganjavi International Award on November 4, 2021.
8. C
Yahoo Inc. has recently announced the closure of its business from China due to an increasingly challenging business and legal environment. Yahoo has taken in line with its commitment to the rights of users and a free and open Internet.
9. D
Ministry of Rural Development, Government of India and e-commerce company Flipkart have signed MoU to empower local businesses under Deendayal Antyodaya Yojana – National Rural Livelihoods Mission. The MoU will help empower local businesses and self-help groups by bringing them under the ambit of e-commerce.
10. C
The Cook Strait separating New Zealand’s North and South Islands has been in the news recently. Friedman, who recently founded the ElectricAir company, has crossed this strait for the first time in an electric plane.
11. D
The Government of Karnataka has recently launched two new schemes “Jansevak” and “Jansapandana”. Out of which one scheme is to bring government services to the doorsteps of citizens and the other scheme has been started for redressal of public grievances.