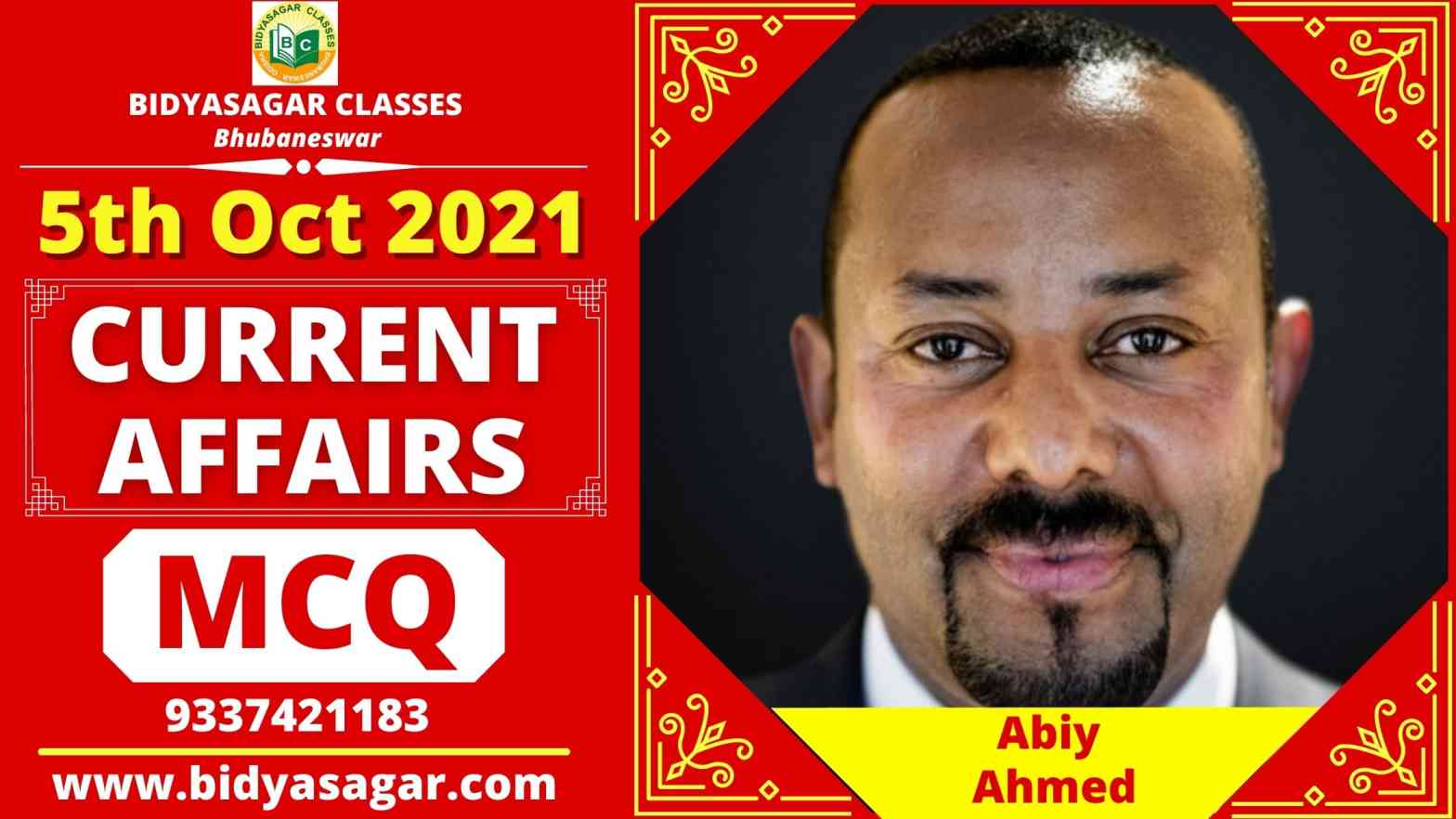 In this article, we will discuss MCQ on important current affairs of 5th October 2021 and their answers with explanations.

1. Name the winner of the 2021 Nobel Prize for Medicine ?
A) Harvey J. Alter and Michael W. Young
B) William C. Campbell and Edvard Moser
C) David Julius and Ardem Patapoutian
D) Mario Capecchi and Richard Axel
2. When is the World Teachers’ Day observed globally?
A) October 02
B) October 03
C) October 04
D) October 05
3. Who has been appointed as the new Prime Minister of Japan, to succeed Yoshihide Suga?
A) Fumio Kishid
B) Taku Yamamoto
C) Toshihiro Nikai
D) Nobuo Kishi
4. Which team has won the Durand Cup 2021?
A) FC Bengaluru
B) FC Army Red
C) FC Goa
D) FC Mohammedan
5. The World Expo 2020 has been organised in Dubai. What is the theme of the expo?
A) Culture and Education
B) Connecting Minds, Creating the Future
C) Live Green, Live Better
D) Building The World of Tomorrow
6. Name the Prime Minister of Ethiopia who has been elected for second five year term?
A) Abiy Ahmed
B) Jawar Mohammed
C) Meles Zenawi
D) Recep Tayyip Erdoğan
7. Colonel Mamady Doumbouya has been sworn in as the Interim President of which country?
A) Liberia
B) Guinea
C) Senegal
D) Morocco
8. Which day of the year is observed as “Ganga River Dolphin Day” in India?
A) 01 October
B) 03 October
C) 04 October
D) 05 October
9. What is the theme of the 2021 International Teachers Day?
A) Teachers at the heart of education recovery
B) Teachers: Leading in crisis, reimagining the future
C) Young teachers: The future of the profession
D) The right to education means the right to a qualified teacher
10. What is the theme of the India Pavilion at the Dubai Expo 2020?
A) Man, Nature, Technology
B) Progress and Harmony for Mankind
C) Openness, Opportunity and Growth
D) Leisure in the Age of Technology
11. Vice President M Venkaiah Naidu has recently distributed the popular Gopinath Bordoloi Award in which state?
A) Kerala
B) Assam
C) Bihar
D) Arunachal Pradesh
12. Which of the following international organization has recently released a report “Global Financial Stability Report” on cryptocurrencies?
A) world bank
B) Moody’s
C) International Monetary Fund
D) World Health Organization
13. Union Environment Minister Bhupendra Yadav has recently started tiger rallies in how many reserves?
A) 22 Reserve
B) 35 Reserve
C) 51 Reserve
D) 67 Reserve
14. Kamdhenu Deepawali 2021 campaign has been launched under the guidance of Gau Vrati Dr. Vallabhbhai Kathiriya, former cabinet minister and first chairman of which commission?
A) NITI Aayog
B) Planning Commission
C) National Kamdhenu Commission
D) National Human Rights Commission
15. Which actress has been made the brand ambassador of “One District One Product (ODOP)” of Uttar Pradesh?
A) Katrina Kaif
B) Kareena Kapoor
C) Kaira Advani
D) Kangana Ranaut
16. Vada Kolam, a widely grown rice variety in which state of India has been given GI tag?
A) Bihar
B) Jharkhand
C) Maharashtra
D) Kerala

1. C
Two American scientists David Julius and Ardem Patapoutian have jointly won the 2021 Nobel Prize for Medicine on October 04, 2021.
2. D
World Teachers’ Day, also known as International Teachers Day, is held annually on October 5 since 1994.
3. A
On October 04, 2021, the Parliament of Japan voted for former Foreign Minister Fumio Kishida to become the new Prime Minister of the country.The 64-year-old Kishida received 257 votes, from 249 parliament members to be sworn in as the 100th Prime Minister of the country.
4. C
FC Goa beat Mohammedan Sporting to win their maiden Durand Cup football title, 1-0, in the final, held at Vivekananda Yuba Bharati Krirangan, Kolkata on October 03, 2021.
5. B
The World Expo 2020 has been organised at Dubai in the United Arab Emirates from 1 October 2021 to 31 March 2022. The main theme of the Dubai Expo 2020 is “Connecting Minds, Creating the Future”
6. A
The Prime Minister of Ethiopia, Abiy Ahmed has been sworn in for a second five-year term on October 04, 2021.
7. B
Colonel Mamady Doumbouya has been sworn in as the Interim President of coastal West African country of Guinea on October 01, 2021.
8. D
In India, the ‘Ganga River Dolphin Day’ is observed every year on October 5, to raise awareness and encourage conservation of Ganga River Dolphins.
9. A
The Theme for 2021 International Teachers Day is “Teachers at the heart of education recovery”.
10. C
Prime Minister Shri Narendra Modi participated at the launch of India Pavilion at Dubai Expo 2020 through video conferencing on October 01, 2021. He invited global investors to invest in India and be a part of India’s growth story. The theme of India pavilion at the Expo is “Openness, Opportunity and Growth”
11. B
Vice President M Venkaiah Naidu has recently distributed the popular Gopinath Bordoloi Award for National Integration and National Contribution for the year 2021 in Assam. The award has also been given to “Shillong Chamber Choir”, the Assam branch of Kasturba Gandhi National Memorial Trust along with author Nirod Kumar Barua.
12. C
International Organization The International Monetary Fund has recently released a report “Global Financial Stability Report” on cryptocurrencies. According to this report, technological innovation is ushering in a new era of making payments and other financial services faster, cheaper, more accessible.
13. C
Union Environment Minister Bhupendra Yadav has recently started tiger rallies in 18 tiger range states in 51 reserves of the country. Over the course of 7 days, these rallies will cover a distance of approximately 7,500 km and will explore the diverse and picturesque landscapes of the country.
14. C
Kamdhenu Deepawali 2021 campaign has been launched recently under the guidance of Gau Vrati Dr. Vallabhbhai Kathiriya, former cabinet minister and first chairman of Rashtriya Kamdhenu Aayog. Under which the manufacturing and marketing of about 100 crore lamps and Laxmi-Ganesh idols made of cow dung will be started.
15. D
The Uttar Pradesh government has recently appointed actress Kangana Ranaut as the brand ambassador of “One District One Product (ODOP)”. The Government of Uttar Pradesh has started this ODOP program with an aim to create product-specific traditional industrial centers in 75 districts.
16. C
Vada Kolam, a rice variety widely produced in Wada in Palghar district of Maharashtra state, India, has been given GI tag. This Vada Kolam is commonly known as Jini or Jhini Chawal all over Maharashtra.