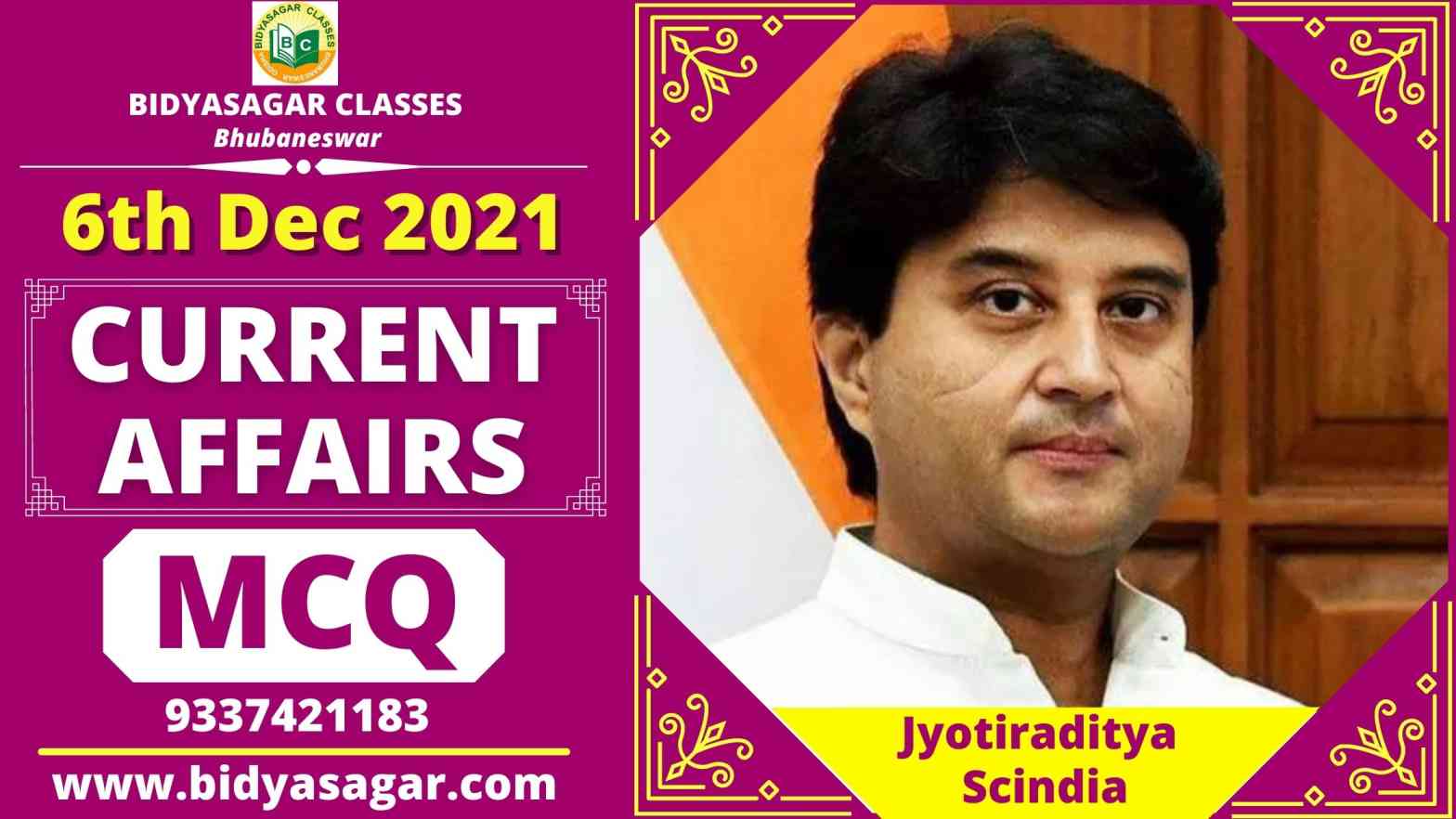 In this article, we will discuss MCQ on important current affairs of 6th December 2021 and their answers with explanations.

1. In which state the 22nd Hornbill Festival begins?
a) Gujarat
b) Nagaland
c) Kerala
d) Maharashtra
2. Who announced the new Helicopter Policy to Set Up Dedicated Hubs & Corridors?
a) Dharmendra Pradhan
b) Nirmala Sitharaman
c) Jyotiraditya Scindia
d) None of the above
3. Who received the 2021 Badminton World Federation (BWF) Player of the Year?
a) Viktor Axelsen and Tai Tzu-ying
b) Jae-Eun Noh and Peter Gade
c) Mia Blichfeldt and Min Tae-zing
d) None of the above
4. Former Tamil Nadu Governor & Andhra Pradesh CM Konijeti Rosaiah Passed Away at the age of ___.
a) 77
b) 82
c) 78
d) 88
5. Assam’s highest civilian award was conferred on Ratan Tata for his contribution to which of the following services?
a) Nursing Service
b) Heart Service
c) Diabetes Care
d) Cancer care
6. Which cooperative company has been ranked 1 out of 300 in the 2021 edition of the 10th Annual World Cooperative Monitor (WCM) report?
a) IFFCO
b) KRIBHCO
c) GNFC
d) Fertilizer Corporation of India
7. Which bank has recently listed its USD 650-million green bonds simultaneously on the India INX and the LuxSE?
a) RBI
b) SBI
c) Yes Bank
d) HDFC Bank
8. What is the name of India’s first biometric-based digital processing system in Airports?
a) Bio-Tech
b) Tech Yatra
c) Digi Yatra
d) None of the above
9. ‘SRESHTA’ scheme is set to be launched by which Union Ministry?
a) Ministry of Tribal Affairs
b) Ministry of Social Justice and Empowerment
c) Ministry of Minority Affairs
d) None of the above
10. Who has been awarded Woman of the Year by World Athletics?
a) Anju Bobby George
b) Dutee Chand
c) Saikhom Mirabai Chanu
d) Mary Kom
11. Who is the new Twitter Chief Executive Officer?
a) Nikesh Arora
b) Sundar Pichai
c) Parag Agrawal
d) None of the above
12. Union Ayush Minister Shri Sarbananda Sonowal has recently inaugurated 50 bedded Integrated AYUSH Hospital in which state?
a) Kerala
b) Gujarat
c) Sikkim
d) Manipur
13. The economic research team of which bank based in Singapore has revised the growth forecast for FY2023 to 7 per cent?
a) Dena Bank
b) Yes Bank
c) Swiss Bank
d) DBS Bank
14. Who has been ranked first among the world’s top 300 cooperatives in the 10th Annual World Cooperative Monitor Report 2021?
a) Ministry of Power
b) Ministry of Sports
c) Indian Farmers Fertilizer Cooperative Limited
d) Planning Commission
15. Shri Anurag Singh Thakur and Yogi Adityanath have inaugurated Doordarshan Kendra’s Earth Station in which city?
a) Lucknow
b) Kanpur
c) Gorakhpur
d) Hamirpur
16. Which of the following IIT institute has appointed Smriti Mandhana as the brand ambassador of incubated startup GUVI?
a) IIT Delhi
b) IIT Mumbai
c) IIT Pune
d) IIT Madras
17. Private sector lender which bank has launched a feature-rich savings bank product “Mitra Plus” for women?
a) ICICI Bank
b) Bank of Baroda
c) Federal Bank
d) Canara Bank
18. Scientists at Indiana University in which of the following countries have discovered in a study that the cause and treatment of mental health and depression can be detected through blood tests?