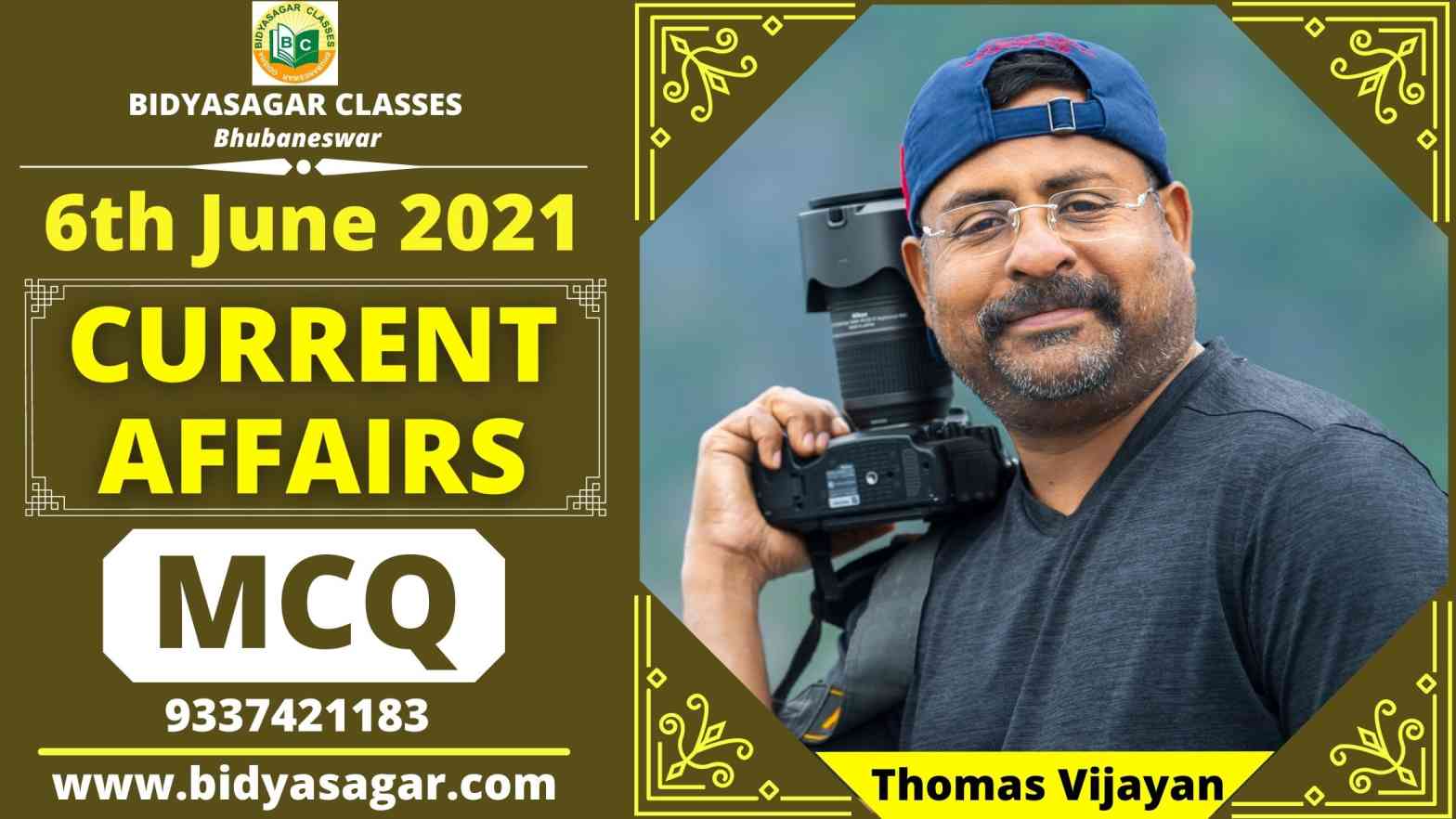 In this article, we will discuss MCQ on important current affairs of 6th June 2021 and their answers with explanations.

1. On the occasion of World Environment Day, PM Modi has launched three E 100 ethanol dispensing stations under a pilot project in which city?

2. Which bank in India has tied with SWIFT to launch ‘SWIFT gpi Instant’, for cross border inward payments?

B) State Bank of India

3. The Government of India has made it mandatory for all Oil Companies to sell ethanol blended petrol with percentage of ethanol up to _________ from April 01, 2023

4. When is the World Pest Day observed?

5. Who is the winner of the 2021 International Booker Prize?

6. Which player has won the inaugural edition of 2021 Belgrade Open Tennis Tournament?

7. Which day has been declared by the UN-FAO as International Day for the Fight Against Illegal, Unreported and Unregulated (IUU) Fishing?

B) First Sunday of June

8. The Central Government has set the target to achieve 20 percent ethanol blending in petrol by which year?

9. Air Marshal Vivek Ram Chaudhari has been appointed as the next Vice Chief of the Air Staff. He will succeed whom to take over the charge from July 2021?

11. Name the winner of the prestigious 2021 Nature TTL Photography Awards?

12. June 6 is dedicated to celebrating which official language recognized by the United Nations?

13. Which year has been declared by UN to be commemorated as the International Year of Artisanal Fisheries and Aquaculture?

14. India has signed a loan agreement with ADB for upgrading major district roads in ________.

16. Which campus of IIT has developed oral tablets of Amphotericin B?

17. Which scheme has been launched in Ladakh for encouraging students to adopt digital learning?

19. Who has become the Chairman of WHO Executive Board?

Pilot Project of E 100 ethanol dispensing stations has been launched by PM Modi at three locations in Pune, for the production and distribution of ethanol across the country, because ethanol has a better impact on the environment as well as on the lives of farmers.

As a part of WED 2021, the Government of India has released an E-20 notification, directing Oil Companies to sell ethanol-blended petrol with the percentage of ethanol up to 20% from April 01, 2023; and BIS Specifications for higher ethanol blends E12 & E15.

Veteran French novelist David Diop has won the prestigious International Booker Prize for the year 2021. He has been chosen for his book translated into English as “At Night All Blood is Black” based on World War I. The Paris-born writer is the first French novelist to win the prize.

In Tennis, the world No. 1 Novak Djokovic (Serbia) defeated world No. 255 Alex Molcan (Slovakia), 6-4, 6-3, in the final to win the men’s singles final of Belgrade Open tournament and eventually lift his 83rd ATP trophy. This was the first edition of the tournament.

The International Day for the Fight Against Illegal, Unreported and Unregulated (IUU) Fishing is organized every year on 5 June by the UN Food and Agriculture Organization (FAO).

Government has reset the target to achieve 20 percent ethanol blending in petrol by 2025. Earlier this target was to be met by 2030.

The Appointments Committee of the Cabinet (ACC) has appointed ace fighter pilot Air Marshal Vivek Ram Chaudhari as the next Vice Chief of the Air Staff. Chaudhari will replace incumbent Air Marshal Harjit Singh Arora who will superannuate on June 30, 2021.

The World Day Against Speciesism is marked on June 5 every year, to stop discrimination based on species membership.

Kerala-based Thomas Vijayan, who is now settled in Canada, has won the 2021 Nature TTL Photography Awards for his photo of an Orangutan clinging to a tree. The photograph is titled ‘The World is Going Upside Down’.

The UN Russian Language Day is observed annually on 06 June. It is one of the six official languages used by the United Nations throughout the Organization.

UN has declared the year 2022 as the International Year of Artisanal Fisheries and Aquaculture, to help focus attention on the small-scale fishermen and women who comprise 90 percent of the world’s fisheries workforce.

India has signed a loan agreement with Asian Development Bank (ADB) for upgrading major district roads in Sikkim. The estimated cost of the project to be supported by ADB is US $ 2.5 million.

Indian Institute of Technology (IIT) Hyderabad has developed oral tablets of Amphotericin B. The nano-fiber technology-based tablets will be given to patients with Black fungus disease (Mucormycosis).

YounTab scheme has been launched in Ladakh for encouraging students to adopt digital learning. This will benefit around 12,300 students of Class 6th to 12th.

International Chess Federation (FIDE) has signed an MoU with Tech Mahindra for organizing the Global Chess League. Vishwanathan Anand has also joined the partnership as a mentor and a partner.

Dr. Patrick Amoth (Director-General for Health, Kenya) has become the Chairman of World Health Organization (WHO) Board. He is succeeding Dr. Harsh Vardhan (Union Minister of Health and Family Welfare of India).

PharmEasy has acquired the online medicine platform Medlife. With this acquisition, PharmEasy has become the biggest e-Pharma company in India.