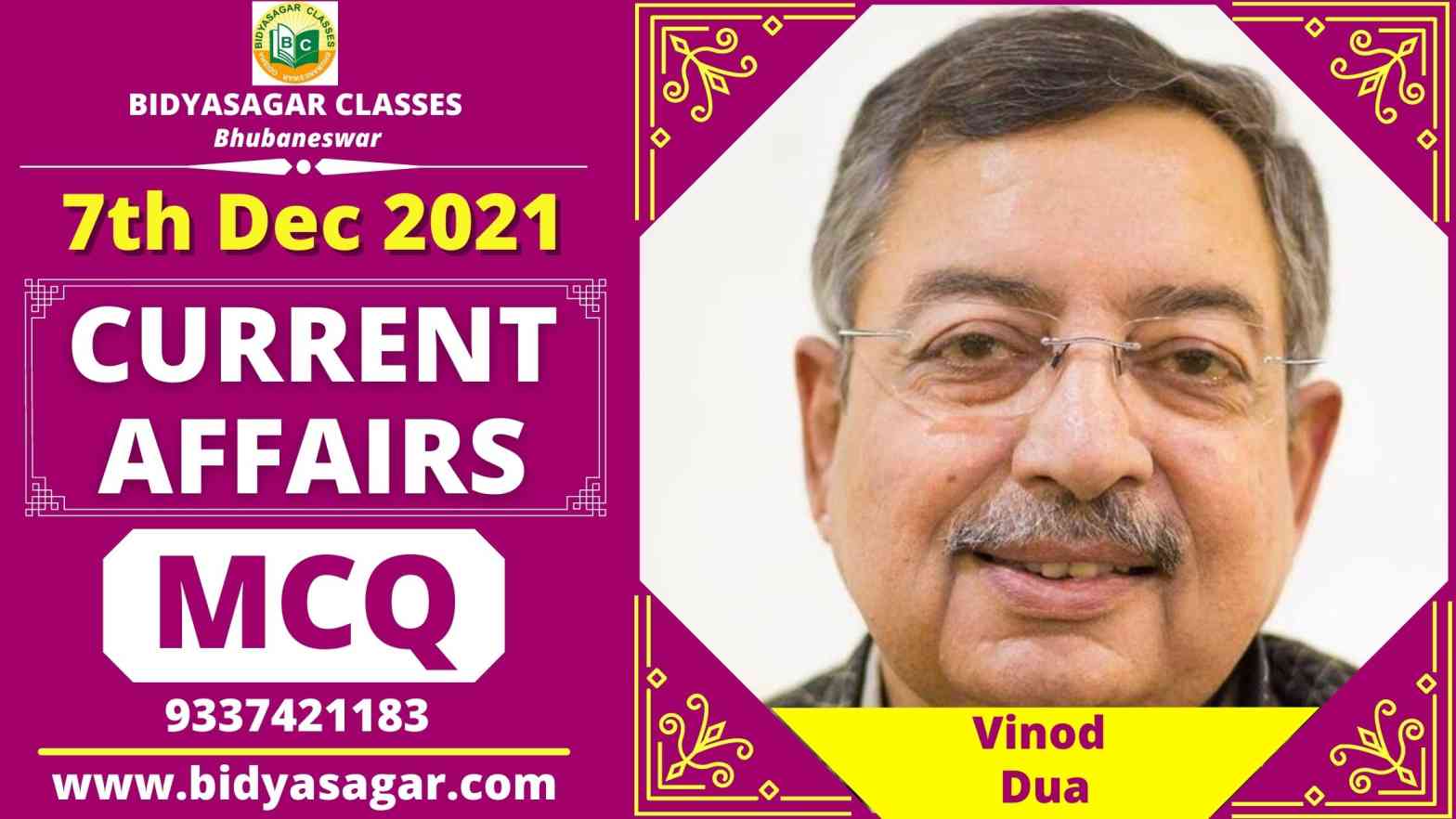 In this article, we will discuss MCQ on important current affairs of 7th December 2021 and their answers with explanations.

1. Which state’s Chief Minister has launched a web portal named ‘Hamar Apan Budget’ and a mobile application prepared by the state finance Department?
(a) West Bengal
(b) Jharkhand
(c) Karnataka
(d) Chhattisgarh
2. S&P Global Ratings has projected India’s GDP for FY22 at __________.
(a) 7.1%
(b) 8.2%
(c) 9.5%
(d) 10.3%
3. Which project has won 2 UNESCO Asia-Pacific Awards for Cultural Heritage Conservation 2021?
(a) Baan Khun Phithak Raya, Pattani, Thailand
(b) Doleshwar Hanafia Jame Mosque, Dhaka, Bangladesh
(c) Mrigadayavan Palace Woodshop, Phetchaburi, Thailand
(d) Nizamuddin Basti, New Delhi, India
4. Every year, the World Soil Day is celebrated on ______________.
(a) 5 December
(b) 6 December
(c) 7 December
(d) 8 December
5. What was the theme for International Volunteer Day 2021?
(a) Volunteer for an inclusive future
(b) Volunteer now for our common future
(c) Volunteers build Resilient Communities
(d) #VolunteersActFirst
6. Konijeti Rosaiah passed away recently. He was former Chief Minister of which state?
(a) Tamil Nadu
(b) Karnataka
(c) Madhya Pradesh
(d) Andhra Pradesh
7. Alka Upadhyaya has been appointed chairperson of which institution?
(a) DRDO
(b) ISRO
(c) NHAI
(d) State Bank of India
8. New Zealand’s Ajaz Patel created history by becoming ______ bowler in Test cricket to claim all 10 wickets in an innings.
(a) 3rd
(b) 4th
(c) 7th
(d) 2nd
9. Vinod Dua recently passed away at 67. He was associated with which field?
(a) Politics
(b) Architecture
(c) Journalism
(d) Administrator
10. OYO company has appointed whom as its strategic group advisor?
(a) B Srinivasan
(b) Nandan Nilekani
(c) Vishnu Shekhar
(d) Rajnish Kumar
11. Which bank has announced the launch of FIRST Private Infinite, the country’s first-ever standalone metal debit card, in partnership with Visa?
(a) SBI
(b) PNB
(c) Axis Bank
(d) IDFC First
12. Cambridge Dictionary has recently named which among the following as the Word of the Year 2021?
(a) Perseverance
(b) Clarity
(c) Vision
(d) NFT
13. Goldman Sachs has estimated India’s GDP growth at _______ in 2022.
(a) 6.1 per cent
(b) 7.1 per cent
(c) 8.1 per cent
(d) 9.1 per cent
14. India and European Union (EU) have agreed to step up their Clean Energy and Climate Partnership. They jointly agreed on a detailed work program until ______.
(a) 2022
(b) 2023
(c) 2024
(d) 2025
15. What was the theme for World Soil Day 2021?
(a) Stop Soil Erosion, Save our Future!
(b) Be the Solution to Soil Pollution
(c) Halt soil salinization, boost soil productivity
(d) Keep Soil Alive, Protect Soil Biodiversity
16. Which of the following ministry will launch “Shreshtha” scheme for students in high schools in targeted areas?
(a) Ministry of Tribals
(b) Planning Commission
(c) Ministry of Social Justice and Empowerment
(d) Ministry of Education
17. Which state of India has become the first state in the country to get 100% Covid-19 vaccination?
(a) Madhya Pradesh
(b) Maharashtra
(c) Kerala
(d) Himachal Pradesh
18. Which of the following language’s famous journalist Vinod Dua, one of the pioneers of broadcast journalism, has passed away recently?
(a) Hindi
(b) Urdu
(c) English
(d) Punjabi
19. Which of these worlds has been chosen as Cambridge Dictionary’s “Word of the Year 2021”?
(a) Clearence
(b) Fastly
(c) Perseverance
(d) Successful
20. Which day is celebrated all over India on 7th December?
(a) Armed Forces Flag Day
(b) Army Service Day
(c) Science Day
(d) Safety Day

1. B
Jharkhand Chief Minister Hemant Soren launched a web portal named ‘Hamar Apan Budget’ and a mobile application (app) prepared by the state finance Department from the Chief Minister’s residential office in Ranchi.
2. C
S&P Global Ratings has retained the Gross Domestic Product (GDP) growth forecast of India unchanged at 9.5 percent for the financial year 2021-22 (FY22) and 7.8 percent for the year ending FY23.
3. D
Nizamuddin Revival Project, India’s project on the holistic urban revitalisation of the historic Nizamuddin Basti community, in New Delhi, Delhi has won the UNESCO Asia-Pacific Awards for Cultural Heritage Conservation 2021 under 2 categories: Award of Excellence and Special Recognition for Sustainable Development.
4. A
World Soil Day (WSD) is held annually on 5 December as a means to focus attention on the importance of healthy soil and to advocate for the sustainable management of soil resources.
5. B
International Volunteer Day or International Volunteer Day for Economic and Social Development Theme 2021: “Volunteer now for our common future”.
6. D
Former Governor of Tamil Nadu and former Chief Minister of the unified State of Andhra Pradesh Konijeti Rosaiah (89-years) passed away in Hyderabad.
7. C
Alka Upadhyaya has been appointed as the chairperson of the National Highways Authority of India (NHAI). #Sanjay Bandopadhyay has been named chairman, Inland Waterways Authority of India.
8. A
New Zealand spinner Ajaz Patel achieved the rarest of rare feats as he took all 10 wickets to fall in India’s first innings in Mumbai.
9. C
Veteran journalist Vinod Dua passed away recently. He was 67. His daughter Dua confirmed it on a social media post.
10. D
PO-bound hospitality unicorn Oyo Hotels and Homes (Oyo) said that it has appointed Rajnish Kumar, former Chairman of State Bank of India (SBI) as Strategic Group Advisor.
11. D
IDFC FIRST Bank announced the launch of FIRST Private Infinite, the country’s first-ever standalone metal debit card, in partnership with Visa. FIRST Private Infinite is a lifetime free card designed specifically for customers who are part of the Bank’s FIRST Private program, a premium savings and wealth offering.
12. A
Perseverance, a word which captures the undaunted will of people across the world to never give up, despite the many challenges of the last 12 months, is Cambridge Dictionary’s Word of the Year 2021.
13. D
Wall Street brokerage, Goldman Sachs has estimated India’s GDP growth at 9.1 per cent in 2022.
14. B
India and European Union (EU) have agreed to step up their Clean Energy and Climate Partnership. They jointly agreed on a detailed work program until 2023 to implement the 2016 India-EU Clean Energy and Climate Partnersh ip.
15. C
World Soil Day 2021 is “Halt soil salinization, boost soil productivity”.
16. C
“Shreshtha” scheme will be launched by the Ministry of Social Justice and Empowerment for the students in high schools in the targeted areas. Under this scheme, students of scheduled caste students of selected areas will be prepared for better skills.
17. D
Himachal Pradesh of India has become the first state in the country to get 100% Covid-19 vaccination. In this state, 100% population (18+) has been vaccinated. In Himachal Pradesh, 53,86,393 lakh people have been given the second dose.
18. A
Vinod Dua, a famous journalist, one of the pioneers of Hindi-language broadcast journalism, has passed away recently. Most recently, he was known for his political commentary on web shows for digital media platforms The Wire and HW News.
19. C
Perseverance has been voted Cambridge Dictionary’s Word of the Year 2021. Perseverance has over 243,000 views on the website in 2021, marking the first time it has made a noticeable presence.
20. A
Armed Forces Flag Day is celebrated all over India on 7th December. This day is a day dedicated to the collection of funds from the people of India for the welfare of the personnel of the Indian Armed Forces. It is celebrated annually in India on 7th December since 1949.