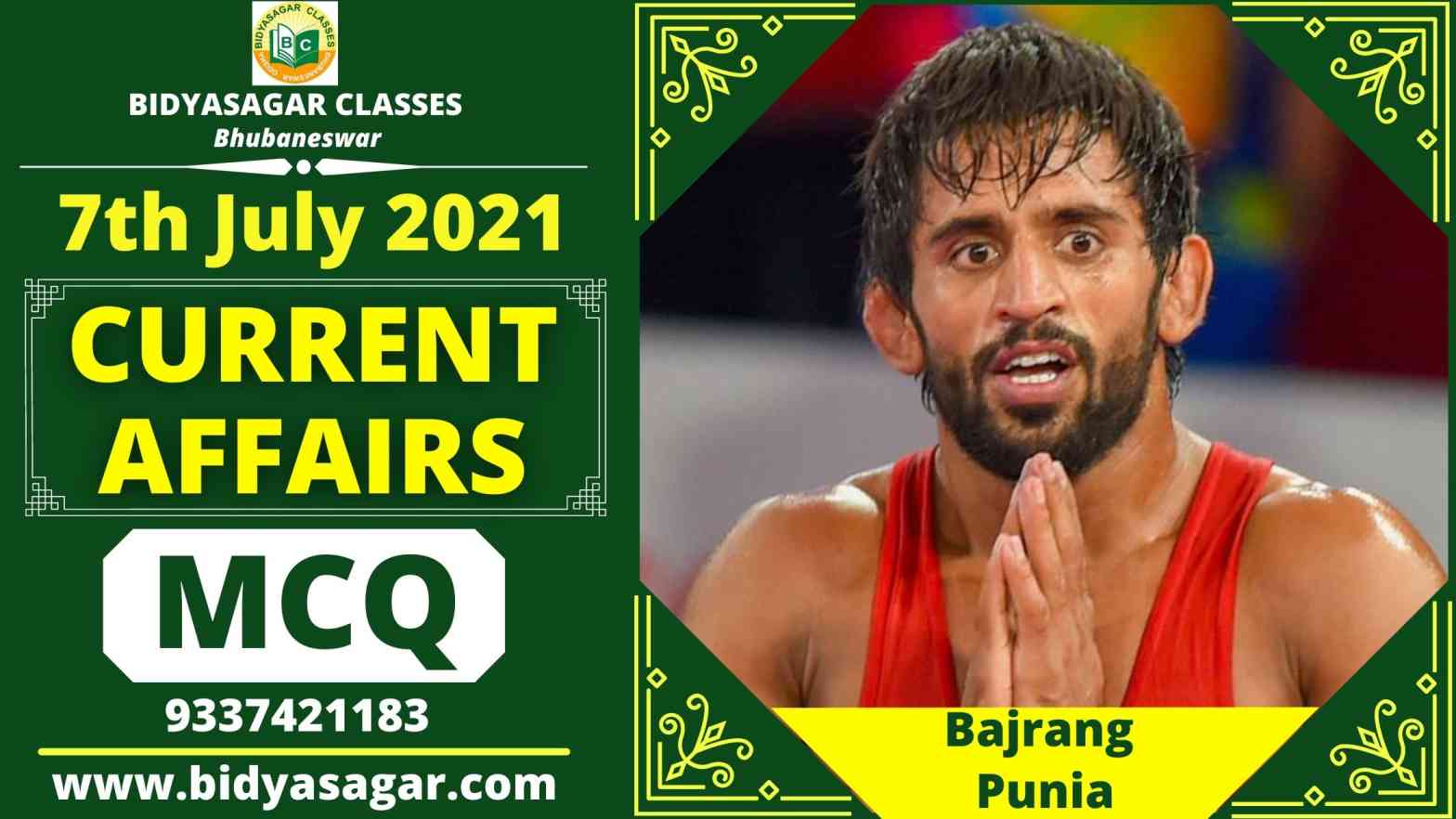 In this article, we will discuss MCQ on important current affairs of 7th July 2021 and their answers with explanations.

1. Union Minister Thawar Chand Gehlot has been appointed as the new governor of which state recently?
A. Gujarat
B. Kerala
C. Bihar
D. Karnataka
2. Which of the following space agency has recently received the first sample of asteroid 162173 Ryugu?
A. ISRO
B. DRDO
C. NASA
D. Christ
3. Recently who has changed the G-Sec auction method after reviewing the market conditions and the government’s market borrowing program?
A. Ministry of Finance
B. NITI Aayog
C. Reserve Bank of India
D. Planning Commission
4. Which of the following company’s founder Jeff Bezos has recently retired as the company’s CEO?
A. Paytm
B. Amazon
C. Flipkart
D. ShopClues
5. Men’s hockey team captain Manpreet Singh and who will be India’s flag bearer at the opening ceremony of Tokyo Olympics 2021?
A. Queen Ramphal
B. Mary Kom
C. Sachin Tendulkar
D. Gagan Narang
6. After black fungus, which state of India has reported the first case of disease named “Bone Death”?
A. Bihar
B. Maharashtra
C. Punjab
D. Gujarat
7. In which of the following cities will the world’s third-largest cricket stadium be built?
A. Pune
B. Jaipur
C. Chennai
D. Delhi
8. Which day is celebrated around the world on 7th July?
A. World Chocolate Day
B. World Coffee Day
C. World Post Day
D. World Science Day
9. Recently, which one of the following gave license to Laurus Labs for manufacturing and marketing Covid-19 drug 2-Deoxy-D-Glucose (2-DG) in India?
A. AIIMS
B. ICAR
C. DRDO
D. IMA
10. Recently, the first production lot of 12 numbers of Short Span Bridging System (SSBS)-10 m designed and developed by _________.
A. BARC
B. IIT Kharagpur
C. CSE
D. DRDO
11. Flipkart partners with _____ to digitize cash-on-delivery payment.
A. Paytm
B. PhonePe
C. Mobikwik
D. PayUBiz
12. The Project BOLD (Bamboo Oasis on Lands in Drought) was recently launched from which state in India recently?
A. Gujarat
B. Haryana
C. Madhya Pradesh
D. Rajasthan
13. The 52nd edition of the International Film Festival of India (IFFI) will be held in __________.
A. Uttar Pradesh
B. Gujarat
C. Maharashtra
D. Goa
14. What is the auction mechanism for 14-year tenor government securities?
A. Open Price Auction
B. Security Price Auction
C. Single Price Auction
D. Uniform Price auction
15. Who among the following is the author of the book ‘The Fourth Lion: Essays for Gopalkrishna Gandhi’?
A. Arun Tiwari
B. Venu Madhav Govindu
C. M. K. Gandhi
D. Amish Tripathi
16. Which of the following ministry recently launched NIPUN Bharat programme?
A. Ministry of Social Justice and Empowerment
B. Ministry of Tribal Affairs
C. Ministry of Education
D. Ministry of Science and Technology
17. Who among the following has claimed 1000th wickets in first-class cricket?
A. Mitchell Starc
B. James Anderson
C. Wahab Riaz
D. Pat Cummins
18. Name the India’s flag-bearers at the closing ceremony of the Tokyo Olympics.
A. Yogeshwar Dutt
B. Bajrang Punia
C. Geeta Phogat
D. Babita Kumari
19. Who has inaugurated and addressed the CoWin Global Conclave, virtually?
A. Rajnath Singh
B. Amit Shah
C. Narendra Modi
D. Ramnath Kovind
20. Name the male India’s flag-bearers at the opening ceremony of the Tokyo Olympics.
A. Manpreet Singh
B. Rohan Bopanna
C. Sunil Chhetri
D. Akhil Kumar

1. D
President Ram Nath Kovind has recently appointed 8 governors simultaneously. In which Union Minister Thawar Chand Gehlot has been appointed as the new Governor of Karnataka. The central government has removed Thawar Chand from the cabinet to give place to Jyotiraditya Scindia. Thawar Chand, 73, has been a part of Modi’s cabinet continuously since he became prime minister in 2014.
2. C
American space agency NASA has recently received a sample from the asteroid 162173 Ryugu, brought to Earth by the Hayabusa 2 spacecraft of the Japan Aerospace Exploration Agency, in December 2020. It is provisionally designated as 1999 JU3.
3. C
Recently the Reserve Bank of India has changed the G-Sec auction method after reviewing the market conditions and the government’s market borrowing program. The Bank has decided that the benchmark securities of 2 year tenor, 3 year tenor, 5 year tenor, 10 year tenor and 14 year tenor and floating rate bonds will be issued using a uniform price auction method.
4. B
Jeff Bezos, the founder of Amazon company, has recently retired from the post of CEO of the company. Now Andy Jesse has been appointed as CEO in his place. Bezos will continue to be the executive chairman of the company. Jeff Bezos announced his retirement in May 2021.
5. B
Men’s hockey team captain Manpreet Singh and six-time world champion boxer Mary Kom will be India’s flag bearers at the Tokyo Olympics 2021 opening ceremony. While wrestler Bajrang Punia will play the role of the Indian flag bearer in the closing ceremony.
6. B
Recently the first case of disease named “Bone Death” has been reported in the state of Maharashtra. According to doctors, steroids are being said to be the main cause of cases of black fungus and avascular necrosis. Three patients under the age of 40 were treated at Hinduja Hospital in Mumbai.
7. B
Rajasthan Cricket Association President Vaibhav Gehlot has recently announced to build the world’s third largest cricket stadium in Jaipur. It will be the second largest stadium in India and the third largest in the world. The stadium will be constructed on about 100 acres of land and will be completed in two-and-a-half-three years with an investment of about Rs 650 crore.
8. A
World Chocolate Day is celebrated all over the world on 7th July. This day was first celebrated in 2009. On this day people give chocolates and gifts to their friends and relatives. But densely, other countries like the United States do not celebrate Chocolate Day on this date, as their own dates are dedicated to special treats.
9. C
Hyderabad-based pharma player Laurus Labs has received a licence from the Defence Research & Development Organisation (DRDO) for manufacturing and marketing Covid-19 drug 2-Deoxy-D-Glucose (2-DG) in India.
10. D
Army inducts 10m bridging system developed by DRDO. The first production lot of 12 numbers of Short Span Bridging System (SSBS)-10 m designed and developed by Defence Research Development Organisation (DRDO) has been inducted into Indian Army.
11. B
Digital payments platform PhonePe has partnered with Flipkart to launch a contactless ‘Scan and Pay’ feature for Flipkart’s pay-on-delivery orders.
12. D
The Project BOLD (Bamboo Oasis on Lands in Drought) is a project of Khadi and Village Industries Commission (KVIC) that seeks to create bamboo-based green patches in arid and semi-arid land zones. It was launched on July 4, 2021 from tribal village Nichla Mandwa in Udaipur, Rajasthan.
13. D
The 52nd edition of the International Film Festival of India (IFFI) will be held in Goa from 20th -28th November 2021.
14. D
Auction method for benchmark securities of tenor 2-year, 3-year, 5-year, 10-year, 14-year tenor and Floating Rate Bonds (FRBs): Uniform price auction method.
15. B
A book titled ‘The Fourth Lion: Essays for Gopalkrishna Gandhi’ authored by Venu Madhav Govindu and Srinath Raghavan. The book consists of twenty-six essays contributed by individuals drawn from various walks of life and from across the globe.
16. C
Union Minister for Education, Ramesh Pokhriyal ‘Nishank’ has launched NIPUN Bharat programme. The aim of the NIPUN programme is that every child in India gets foundational literacy and numeracy (FLN) by the end of Grade 3, by 2026-27.
17. B
Veteran England fast bowler James Anderson has added another feather to his cap as he completed 1000 wickets in first-class cricket.
18. B
Bajrang Punia, a silver medallist at the 2018 World Wrestling Championships, will be the flag-bearer at the closing ceremony on August 8.
19. C
The Prime Minister of India Narendra Modi inaugurated and addressed the CoWin Global Conclave, virtually. The global meet was participated by representatives from 142 countries.
20. A
Manpreet Singh, the men’s hockey team skipper, will be India’s flag-bearers at the opening ceremony of the Tokyo Olympics, announced Indian Olympic Association (IOA).