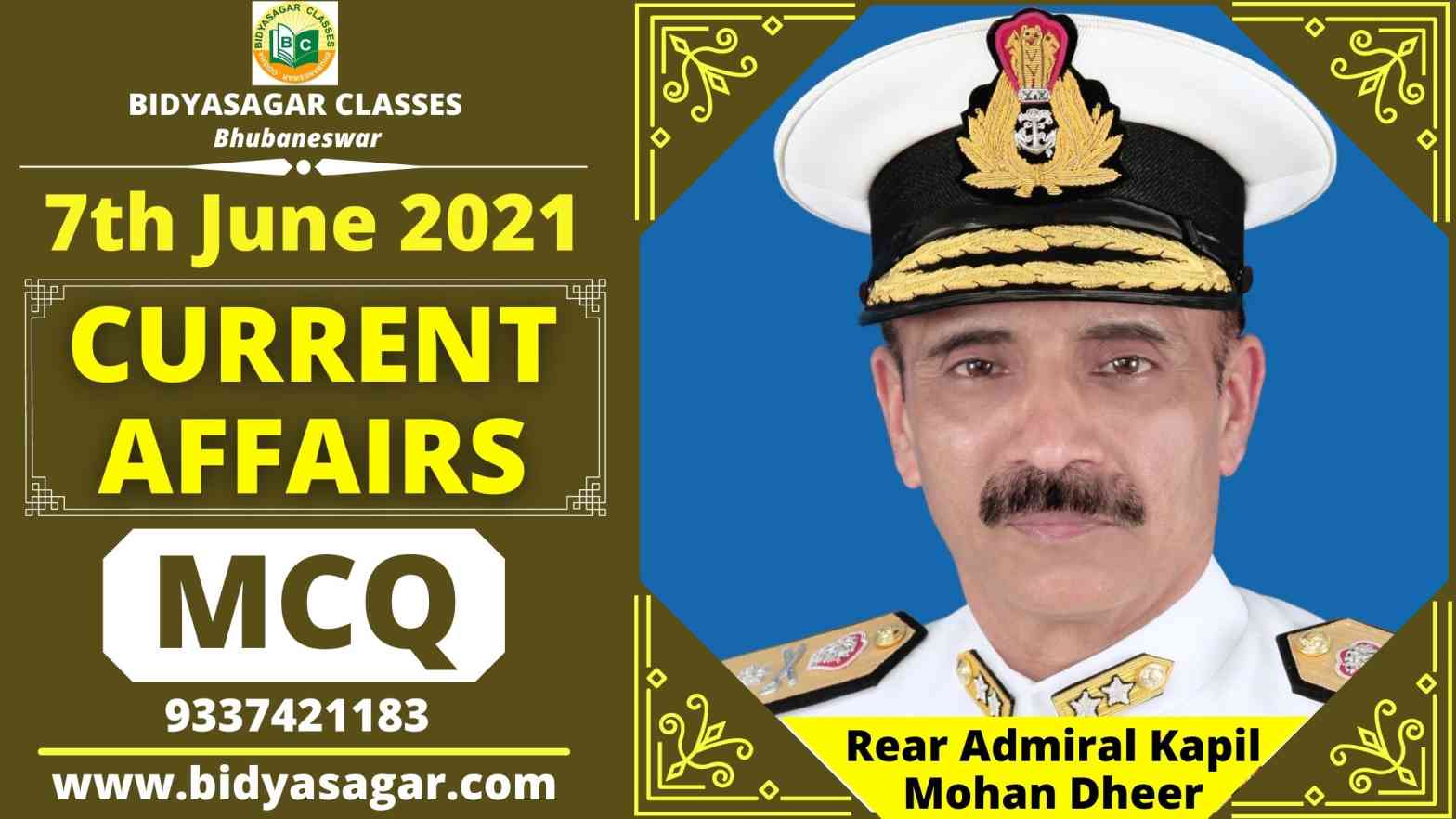 In this article, we will discuss MCQ on important current affairs of 7th June 2021 and their answers with explanations.

1. What is the rank of India in the latest rank of 17 Sustainable Development Goals adopted by 193 countries of the United Nations?

2. Which power company of the Ministry of Power has recently signed e-mobility agreements with Convergence Energy Services Limited?

3. Which of the following department has recently launched its new e-filing portal?

4. NMPB and who has recently signed MoU to provide cultivation and production of medicinal plants and herbs in India?

5. Recently who has launched SAGE program and SAGE portal for India’s elders?

6. Which Rear Admiral has recently taken over as Joint Secretary in the Department of Military Affairs?

7. Which of the following Indian Army’s oldest hydrographic survey ship INS Sandhayak has been decommissioned?

D) none of these

9. Who has been appointed as the World Bank Education Advisor?

10. Which Indian PSU has joined UN’s CEO Water Mandate to ramp up the work on water conservation?

11. CBSE has collaborated with _________ for introducing Coding curriculum for classes 6th to 8th.

12. Which operation has been started by the Indian Coast Guard and Sri Lankan authorities for firefighting a chemical-laden vessel anchored off Colombo?

13. Which state government has announced 33.3 % reservation for girl students in engineering and medical colleges?

15. Government of India has assured safe potable tap water in every household of North Western states by _____.

17. Facebook India has launched Tech Scholars Programme for the ____ students for research and mentorship.

NHPC Limited, a power company of the Ministry of Power recently entered into a partnership with Convergence Energy Services Limited, a wholly owned subsidiary of Energy Efficiency Services Limited, for leasing and installation of 25 electric vehicles. E-mobility agreements have been signed.

Income Tax Department has recently launched its new e-filing portal. The aim of which is to provide modern and seamless experience along with convenience to the taxpayers of the country. A new call center number has also been given on this portal to help the taxpayers.

National Botanical Research Institute (CSIR-NBRI) and National Board of Medicinal Plants recently signed MoU for cultivation and production of medicinal plants and herbs in India. have done.

Minister of Social Justice and Empowerment, Shri Thaawarchand Gehlot has recently launched the SAGE (Senior Care Aging Growth Engine) program and SAGE portal for the elderly. Through which products and services for the elderly will be made available from SAGE.

Indian Navy’s oldest hydrographic survey ship INS Sandhyak was recently decommissioned at the Naval Dockyard, Visakhapatnam after serving the nation for 40 glorious years. The ship INS Sandhayak has been an active participant in many important missions such as Operation Pawan, assisted by Indian peacekeeping forces in Sri Lanka in 1987.

Famous singer Saeed Sabri has recently passed away at the age of 85. He has brought laurels to Rajasthan in Bollywood by singing the superhit songs “Ik Mulaqat Zaroori Hai Sanam” in the movie “Sirf Tum” and “Der Na Ho Jaye” in the movie Hina.

NTPC Ltd has joined UN Global Compact’s CEO Water Mandate. It is an initiative of United Nations for demonstrating the commitment & efforts of companies towards improving water and sanitation.

Central Board of Secondary Education (CBSE) has collaborated with Microsoft for introducing the Coding curriculum for classes 6th to 8th. The curriculum for Data Science will be introduced in classes 8th to 12th from the academic session of 2021-22.

Operation SAGAR AARAKSHA II has been started by the Indian Coast and Sri Lankan authorities for firefighting a chemical laden vessel anchored off Colombo. The container vessel MV X-Press Pearl left Colombo on 25th May, 2021.

IPL 2021 has been rescheduled to September-October, 2021. The rest of the matches of the tournament will be held in United Arab Emirates (UAE).

The government of India has assured safe and potable tap water in every household of North-Western states and UTs by 2022. The target states and UTs are- Ladakh, Jammu & Kashmir, Himachal Pradesh, Haryana, and Punjab.

Bill Gates and European Union have pledged support of $1 billion for green technology. Low-Carbon technologies will be rolled out in Europe for meeting its climate change goals.

Facebook India has launched Tech Scholars Programme for law students for research and mentorship. Shardul Amarchand Mangaldas & Co will be the knowledge partner of the program.

Merapi volcano has recently erupted in Indonesia. It is located on the border of Central Java and Yogyakarta and is the most active volcano of Indonesia that has erupted 4 times in the past.