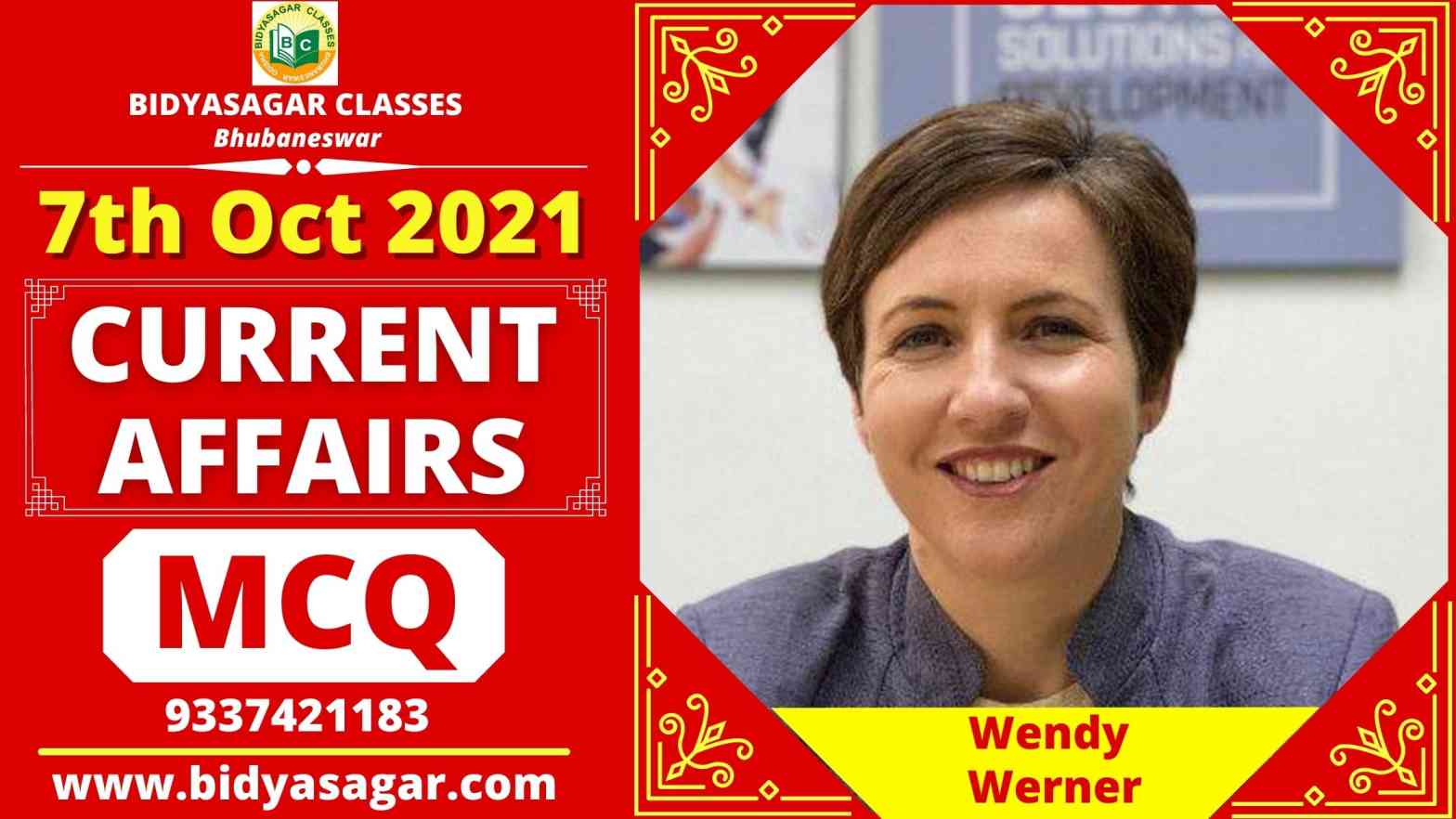 In this article, we will discuss MCQ on important current affairs of 7th October 2021 and their answers with explanations.

1. Name the winners of the 2021 Nobel Prize in Chemistry
A) Richard Henderson and Ben Feringa
B) Jennifer Doudna and Akira Yoshino
C) Benjamin List and David MacMillan
D) William E. Moerner and Paul L. Modrich
2. Which bank has launched NAV-eCash card for Indian Navy on INS Vikramaditya?
A) Punjab National Bank
B) State Bank of India
C) Canara Bank
D) Bank of Baroda
3. Which Section of SARFAESI Act states that a company can carry the business of asset reconstruction only after obtaining a certificate of registration from RBI in addition to having prescribed limit of minimum net owned fund requirement ?
A) Section 3
B) Section 5
C) Section 2
D) Section 4
4. The Ministry of Textile has extended the Comprehensive Handicrafts Cluster Development Scheme (CHCDS) upto what period?
A) March 2026
B) March 2022
C) March 2024
D) March 2025
5. RBI has recently superseded the Board of Directors of Srei Infrastructure Finance Limited (SIFL) and Srei Equipment Finance Limited (SEFL) under which Section of RBI Act, 1934?
A) Section 54-EE (1)
B) Section 45-IE (1)
C) Section 35-BE (1)
D) Section 42-AE (1)
6. The World Cotton Day is observed annually on which day?
A) October 07
B) October 06
C) October 05
D) October 04
7. How many PM MITRA mega textile parks have been approved by the government to be set up in 5 years?
A) 5
B) 15
C) 7
D) 10
8. The Moody’s Investor Service has recently revised the sovereign rating outlook of India to_______
A) Stable
B) Negative
C) Neutral
D) Prime
9. What was the profession of Arvind Trivedi who has passed away recently?
A) Litterateur
B) Economist
C) Actor
D) Sportsperson
10. The Mahabahu Brahmaputra River Heritage Centre has been inaugurated in which city recently?
A) Itanagar
B) Guwahati
C) Gangtok
D) Shillong
11. Who have been honoured with the the 2021 Yidan Prize?
A) Usha Goswami and Sir Fazle Hasan
B) Carol S. Dweck and Vicky Colbert
C) Anant Agarwal and Larry Hedges
D) Eric A. Hanushek and Dr Rukmini Banerji
12. The Alibaug white onion of which state has recently received the GI tag?
A) Assam
B) Maharashtra
C) West Bengal
D) Bihar
13. In the Comprehensive Handicrafts Cluster Development Scheme (CHCDS) handicraft cluster having more than ____ artisans will be selected for the scheme?
A) 20,000
B) 12,000
C) 5,000
D) 10,000
14. What is the minimum net owned fund requirement for a company to operate as an Asset Reconstruction Company?
A) Rs 1 crore
B) Rs 3 crore
C) Rs 2 crore
D) Rs 4 crore
15. Who has been appointed as the new administrator of Srei Infrastructure Finance Limited (SIFL) and Srei Equipment Finance Limited (SEFL)?
A)Debadatta Chand
B) Sanjiv Chadha
C) Ajay K Khurana
D) Rajneesh Sharma
16. Which of the following Indian female player has won the best female player award?
A) Savita Poonia
B) Gurjit Kaur
C) PR Sreejesh
D) Suman Verma
17. Which state has become the first Indian state to start organized cultivation of cinnamon?
A) Gujarat
B) Himachal Pradesh
C) Punjab
D) Bihar
18. The International Finance Corporation has recently announced who among the following has been appointed as its new head in India?
A) James Warner
B) Corey James
C) Ros Calvin
D) Wendy Werner
19. Bangladesh High Commissioner has honored the ex-servicemen of 1971 war on BNS Somudra Avijan in which city?
A) Pune
B) Sikkim
C) Visakhapatnam
D) Kolkata
20. The Commonwealth Games to be held next year at which place has been withdrawn from the hockey competition from 2022?
A) Washington
B) Dubai
C) Birmingham
D) London

1. C
The Nobel Prize in Chemistry for the year 2021 has been awarded jointly to Benjamin List (Germany) and David MacMillan (the USA) “for the development of asymmetric organocatalysis”.
2. B
The State Bank of India (SBI) has partnered with the Indian Navy to launch NAV-eCash card for the naval personnel onboard the country’s largest Naval Aircraft carrier INS Vikramaditya.
3. A
As per Section 3 of the SARFAESI Act, a company can carry the business of asset reconstruction only after obtaining a certificate of registration from RBI and,having the owned fund of not less than Rs 2 crore
4. A
Ministry of Textiles has approved the continuation of the Comprehensive Handicrafts Cluster Development Scheme (CHCDS) up to March 2026. The total outlay of CHCDS will be Rs 160 crore.
5. B
The Reserve Bank of India has superseded the Board of Directors of Srei Infrastructure Finance Limited (SIFL) and Srei Equipment Finance Limited (SEFL) under Section 45-IE (1) of the Reserve Bank of India Act, 1934. These both are NBFCs.
6. A
The WHO-recognised World Cotton Day (WCD) is observed every year on October 07 since 2019 to celebrate the international cotton industry and its contribution to communities and the global economy..
7. C
The Centre has approved the setting up of seven new mega textile parks, or PM MITRA (पीएम मित्र) parks across the country in an effort to help furthering the growth of textile sector in the economy and position India strongly on the Global textiles map. The total outlay for the project has been set at Rs 4,445 crore for five years.
8. A
Rating agency Moody’s Investors Service has upgraded India’s sovereign rating outlook to ‘stable’ from ‘negative’ , on October 05, 2021, following an improvement in the financial sector and faster-than expected economic recovery across sectors.
9. C
Veteran television actor Arvind Trivedi, who is famously known for his iconic role of demon-king Raavan in Ramanand Sagar’s TV serial Ramayan, has passed away suffering from age-related issues. He was 82.
10. B
Vice-President of India, Shri M. Venkaiah Naidu inaugurated the Mahabahu Brahmaputra River Heritage Centre at Panbazar in Guwahati, Assam recently.
11. D
US-based Stanford University’s Professor Eric A. Hanushek and Mumbai-based Dr Rukmini Banerji have been felicitated with the 2021 Yidan Prize, the world’s highest education accolade. The coveted award is given by the Yidan Prize Foundation, Hong Kong.
12. B
The famous Alibaug white onion from Maharashtra’s Raigad district has received the Geographical Indication (GI) tag on September 29, 2021.
13. D
The mega handicraft clusters having more than 10,000 artisans will be selected for overall development under this scheme.
14. C
having the owned fund of not less than Rs 2 crore or such other amount not exceeding 15% of total financial assets acquired or to be acquired by the securitisation company or reconstruction company.
15. D
RBI has appointed Shri Rajneesh Sharma as the Administrator of SIFL and SEFL under Section 45-IE (2) of the RBI Act
16. B
Indian hockey player Gurjit Kaur has recently won the Best Female Player Award. While in the men’s category, the captain of the team Harmanpreet Singh has won the best player award. Also, Savita Poonia and PR Sreejesh have won the Best Goalkeeper Award.
17. B
Himachal Pradesh state has recently become the first Indian state to start organized cultivation of cinnamon. State Agriculture Minister Virendra Kanwar has planted the first sapling in Una district. India currently imports cinnamon annually from Sri Lanka, China, Indonesia, Vietnam and Nepal.
18. D
The International Finance Corporation has recently announced the appointment of Wendy Werner as its new head in India, replacing Jun Zhang. Wendy Werner will focus on the growth and diversification of India’s portfolio from an office in New Delhi.
19. C
The High Commissioner of Bangladesh, His Excellency Mr. Muhammad Imran, remembering the contribution of Indian Marines in Bangladesh’s independence in 1971, during a ceremony on BNS Somudra Avijan in Visakhapatnam, joined the war from across the country. 10 Ex-Servicemen of the Indian Navy have been honored.
20. C
Hockey has been withdrawn from the Commonwealth Games 2022 to be held in Birmingham next year. While England had also pulled out of the Junior Men’s World Cup to be held in Bhubaneswar a day earlier, citing the same reasons.