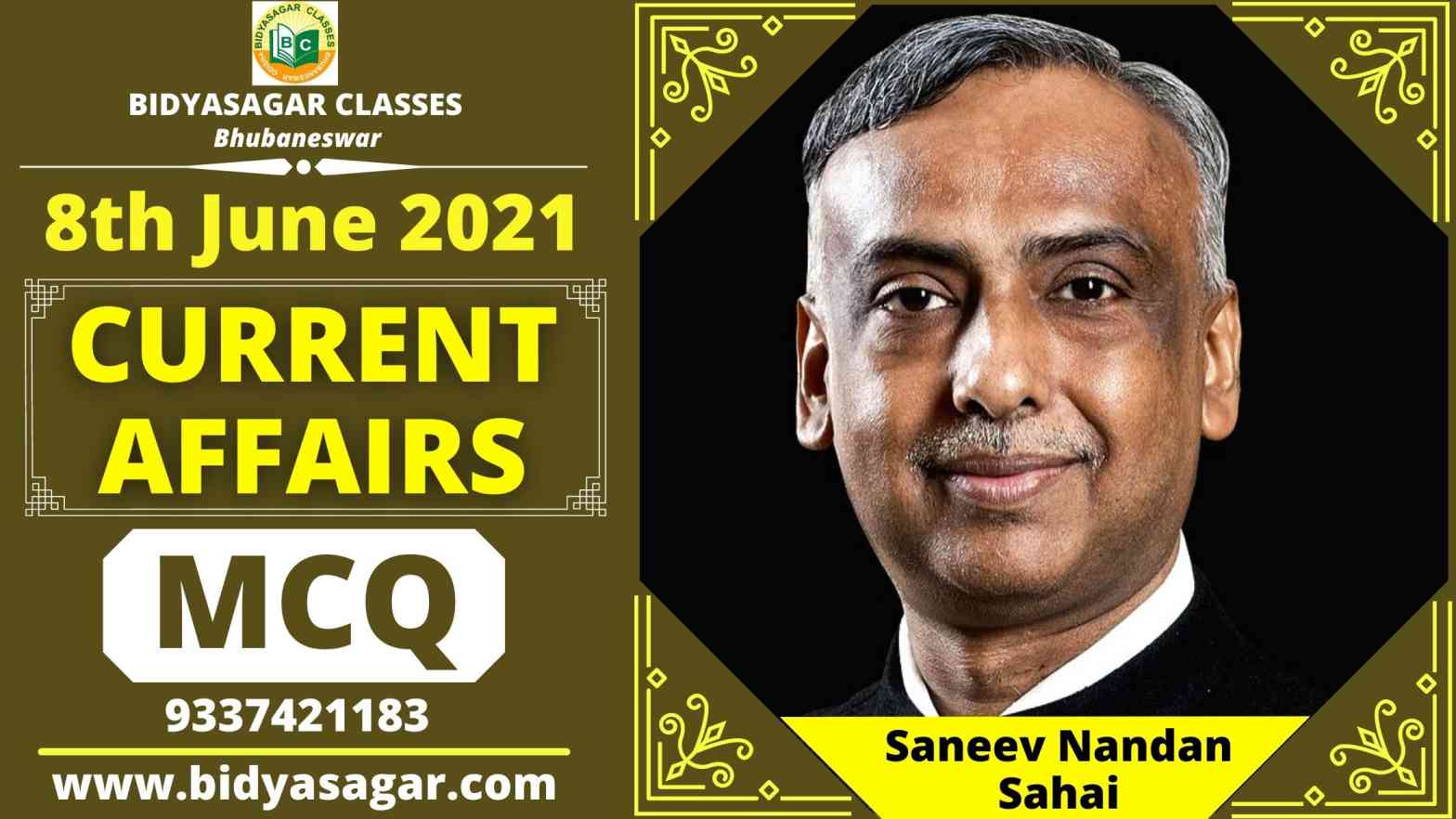 In this article, we will discuss MCQ on important current affairs of 8th June 2021 and their answers with explanations.

1. PM Modi has launched three E 100 ethanol dispensing stations under a pilot project in which city?

2. Name the winner of the prestigious 2021 Nature TTL Photography Awards.

4. Who among the following has been appointed as the World Bank Education Advisor?

5. Sami Khedira announced his retirement. He belongs to which of the following sports?

6. Who among the following has been appointed as the Managing Director and CEO of RBL Bank?

7. Which of the following States/UT has launched the YounTab scheme for students to encourage digital learning?

8. Which state/UT has launched ‘Knowledge Economy Mission’ to boost job prospects in the state by supporting knowledge workers?

9. What was the Revenue collected from Goods and Services Tax (GST) in May 2021?

10. What is India’s rank on the 17 Sustainable Development Goals (SDGs) adopted as 2030 agenda, according to the State of India’s Environment Report 2021?

B) Safe food today for a healthy tomorrow

D) Our Actions are Our Future

13. Who among the following has won the Azerbaijan Grand Prix 2021?

14. June 6 is dedicated to celebrate which official language recognised by the United Nations?

15. Who has been appointed as the Chairman of the Natural Gas Regulatory Board?

17. Which film has won the ‘Best Film’ award on environmental conservation at the 67th National Films Awards 2021?

18. Who has been appointed as the CEO of HSBC India?

19. Which state has topped the National Performance Grading Index of School Education 2019-20?

20. Which university has topped in ‘THE Asia University Ranking 2021’?

Pilot Project of E 100 ethanol dispensing stations has been launched by PM Modi at three locations in Pune, for the production and distribution of ethanol across the country, because ethanol have a better impact on the environment as well as on the lives of farmers.

Kerala-based Thomas Vijayan, who is now settled in Canada, has won 2021 Nature TTL Photography Awards for his photo of an Orangutan clinging to a tree. The photograph is titled ‘The World is Going Upside Down’.

A new book ‘1232 km: The Long Journey Home’ by filmmaker Vinod Kapri chronicles the journey of seven migrant workers from Bihar, who journeyed back home on their bicycles and reached their destination after seven days. The book is published by Harper Collins.

Ranjitsinh Disale has been appointed as the World Bank Education advisor, starting from June 2021 to June 2024. Disale is the first Indian to have been awarded the Global Teacher Award in 2020, will now be working on the Coach Project, launched by The World Bank in March 2021.

The Reserve Bank of India has approved the appointment of Vishwavir Ahuja as the Managing Director and CEO of RBL Bank for a one-year period with effect from June 30, 2021.

Ladakh Lt Governor has launched the YounTab scheme for students in the Union Territory. It is formulated to encourage digital learning, bridge the digital divide between connected and unconnected and mitigate the Covid pandemic disruptions.

GST collections at Rs 1.03 lakh crore for May. The goods and service tax collections for May clocked Rs 1,02,709 crore, making it the eighth straight month of collections crossing Rs 1 lakh crore mark.

This year’s theme is “Safe food today for a healthy tomorrow”. It discusses the fact that the production and consumption of safe food have immediate and long-term benefits.

The Central Board of Secondary Education (CBSE) has collaborated with Microsoft to introduce Coding as a new subject for students of Class 6-8 and Data Science as new subject for Class 8-12 in the 2021-2022 academic session.

The UN Russian Language Day is observed annually on 06 June. It is one of the six official languages used by the United Nations throughout the Organization.

Senior administrator, Sanjay Nandan Sahai has been appointed as the Chairman of Natural Gas Regulatory Board (PNGRB). He has also served as power secretary. He was appointed by the Search Committee headed by VK Saraswat.

Bengaluru International Airport has achieved net energy neutral status in FY21. It has also saved around 22 lakh units of energy in the previous year.

‘Water Burial Bags’ has won the ‘Best Film’ award on environmental conservation at the 67th National Films Awards 2021. It has been directed by Shantanu Sen.

Hitendra Dave has been appointed as the Chief Executive Officer (CEO) of Hongkong and Shanghai Banking Corporation (HSBC). He has assumed the post on 7th June.

Punjab has topped the National Performance Grading Index of School Education 2019-20. Chandigarh and Tamil Nadu have been placed at 2nd and 3rd position respectively.