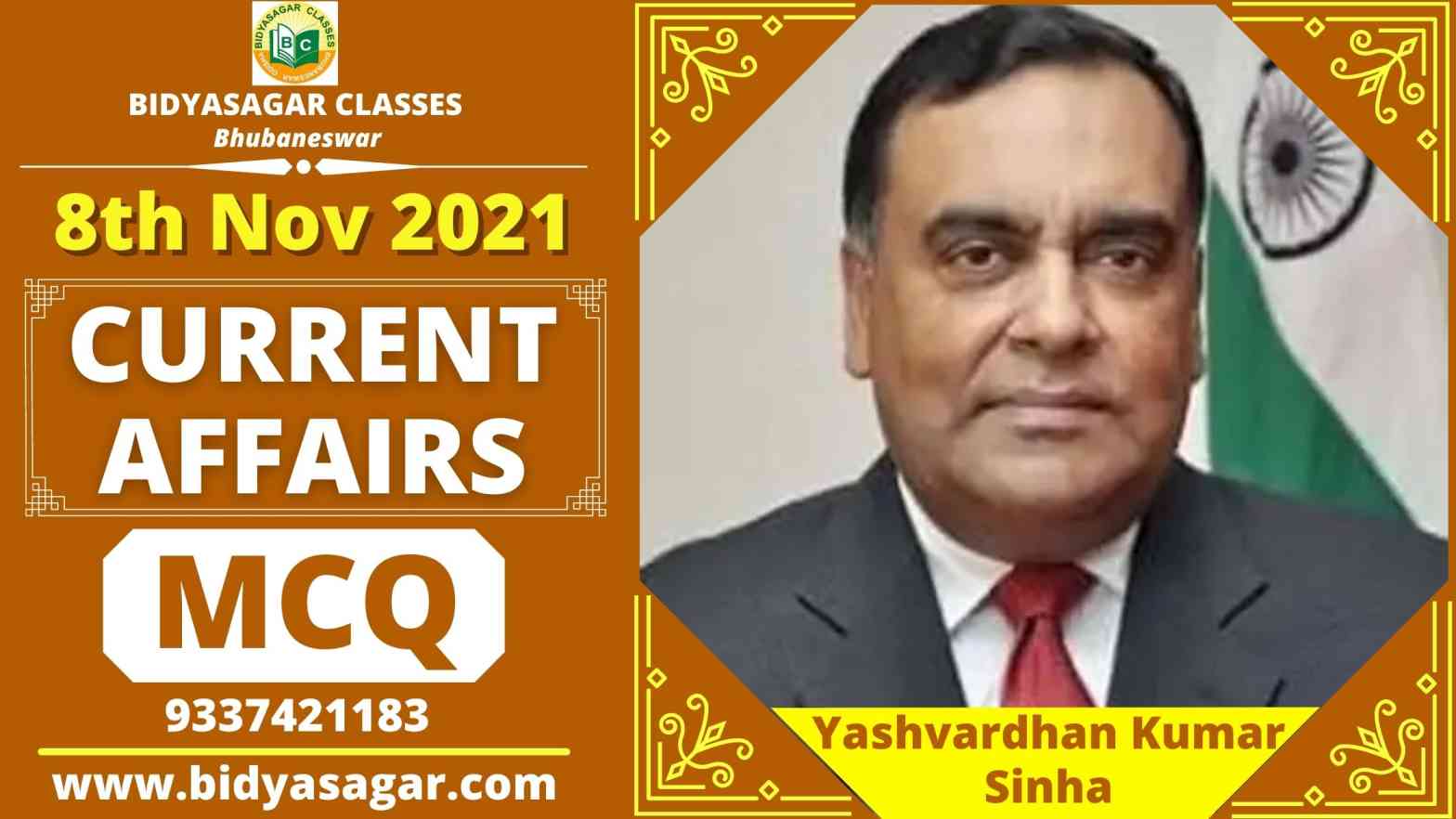 In this article, we will discuss MCQ on important current affairs of 8th November 2021 and their answers with explanations.

1. Who among the following has won the 2020 Presidential election of the United States?
A) Bernie Sanders
B) Donald Trump
C) Kamala Harris
D) Joe Biden
2. Who has been appointed as the new Chief Information Commissioner (CIC)?
A) Heeralal Samariya
B) Saroj Punhani
C) Yashvardhan Kumar Sinha
D) Uday Mahurkar
3. Name the latest earth observation satellite launched by ISRO in 2020
A) EOS-01
B) EOS-XX
C) EOS-IS
D) EOS-20
4. The Atal Innovation Mission (AIM) has collaborated with which country to launch ‘AIM–Sirius Innovation Programme 3.0’?
A) United States
B) Russia
C) France
D) Japan
5. When is the International Day of Radiology (IDoR) observed?
A) 5 November
B) 7 November
C) 6 November
D) 8 November
6. India’s first solar-based Integrated Multi-Village Water Supply Project (IMVWSP) has been launched in which state?
A) Aruanchal Pradesh
B) Haryana
C) West Bengal
D) Karnataka
7. Which state has launched the eco-sustainable programme ‘Parivarthanam’ for the fishing community?
A) West Bengal
B) Gujarat
C) Kerala
D) Assam
8. Who has been appointed as the President of Hockey India in 2020?
A) Mushtaque Ahmad
B) Tapan Kumar Das
C) Rajinder Singh
D) Gyanendro Ningombam
9. Which of the following state government has made a law to give 75 percent reservation to local people in private jobs?
A) Government of Kerala
B) Government of Punjab
C) Gujarat government
D) Government of Haryana
10. India’s foreign exchange reserves have recently reached $ 642 billion. Along with this, which place is India in the world with the most foreign exchange reserves?
A) First
B) Second
C) Third
D) Fourth
11. The Ministry of Railways and which ministry have recently formed “Single Window Filming Mechanism”?
A) Ministry of Education
B) Ministry of Sports
C) Ministry of Information and Broadcasting
D) NITI Aayog
12. Researchers from which of these IIT institutes have detected the presence of Bridgmanite mineral in Katol L6 chondrite meteorite?
A) IIT Delhi
B) IIT Mumbai
C) IIT Kanpur
D) IIT Kharagpur
13. Which of the following Vice Admiral has taken over as the Chief of Staff of the Western Naval Command?
A) Sanjay Mehta
B) Sandeep Lakhtakia
C) Krishna Swaminathan
D) Rangnath Harrat
14. CS Venkatakrishnan has been appointed as the new CEO of which bank recently?
A) Swiss Bank
B) Bank of India
C) Barclays
D) NABARD
15. South African author Damon Galgut has recently won which award for “The Promise”?
A) Oscar Awards
B) BAFTA Awards
C) Booker Prize
D) Noble Prize

1. D
Joe Biden has defeated President Donald Trump to become the 46th president of the United States.
2. C
Yashvardhan Kumar Sinha took oath as the new Chief Information Commissioner (CIC) on 07 November 2020.
3. A
The Indian Space Research Organisation (ISRO) successfully launched its latest earth observation satellite (EOS-01), along with nine other satellites from customer nations on 07 November 2020.
4. B
The Atal Innovation Mission (AIM), a flagship initiative by the NITI Aayog, and Russia’s Sirius (Scientific International Research in Unique Terrestrial Station) has jointly launched ‘AIM–Sirius Innovation Programme 3.0’, a 14-day virtual programme for Indian and Russian schoolchildren.
5. D
The International Day of Radiology (IDoR) is held annually on November 8 to promote the role of medical imaging in modern healthcare.
6. A
The Union Jal Shakti Minister Gajendra Singh Shekhawat launched India’s first solar-based Integrated Multi-Village Water Supply Project (IMVWSP) in Arunachal Pradesh on 06 November 2020.
7. C
The government of Kerala has launched a pioneering eco-sustainable programme called ‘Parivarthanam’, to improve the livelihood of the fishing community.
8. D
The Hockey India Executive Board has appointed Manipur’s Gyanendro Ningombam, as the President of Hockey India, on 06 November 2020, during the 10th Hockey India Congress and Elections in New Delhi.
9. D
The Haryana government has recently made a law to give 75 percent reservation to local people in private jobs in Haryana. In Haryana, this law will come into force from January 15, 2022. Haryana government has also issued a notification regarding this on 06 November 2021.
10. D
India’s foreign exchange reserves have recently increased by $1.919 billion to $642 billion. With this, India ranks fourth in the list of countries with the most foreign exchange reserves in the world. Whereas China ranks first in this list. This foreign exchange reserve is also called forex reserve or reserve of reserves.
11. C
Ministry of Information and Broadcasting and Ministry of Railways have recently introduced “Single Window Filming Mechanism” with an aim to make filming permissions easier and more efficient in railway premises.
12. D
Researchers from IIT Kharagpur have recently detected the presence of the bridgmanite mineral in the Katol L6 chondrite meteorite. Which is the most abundant mineral in the Earth’s interior.
13. C
Vice Admiral Krishna Swaminathan has recently taken over as the Chief of Staff of the Western Naval Command. He joined the Indian Navy on 01 July 1987, Admiral Swaminathan is an expert in communication and electronic warfare.
14. C
CS Venkatakrishnan has recently been appointed as the new CEO of Barclays. He is an Indian-American and the first person of color to hold that position.
15. C
South African author Damon Galgut has recently won the Booker Prize 2021 for “The Promise”. Which is his third shortlisted novel, which chronicles his homeland from the late apartheid era to the presidency of Jacob Zuma.