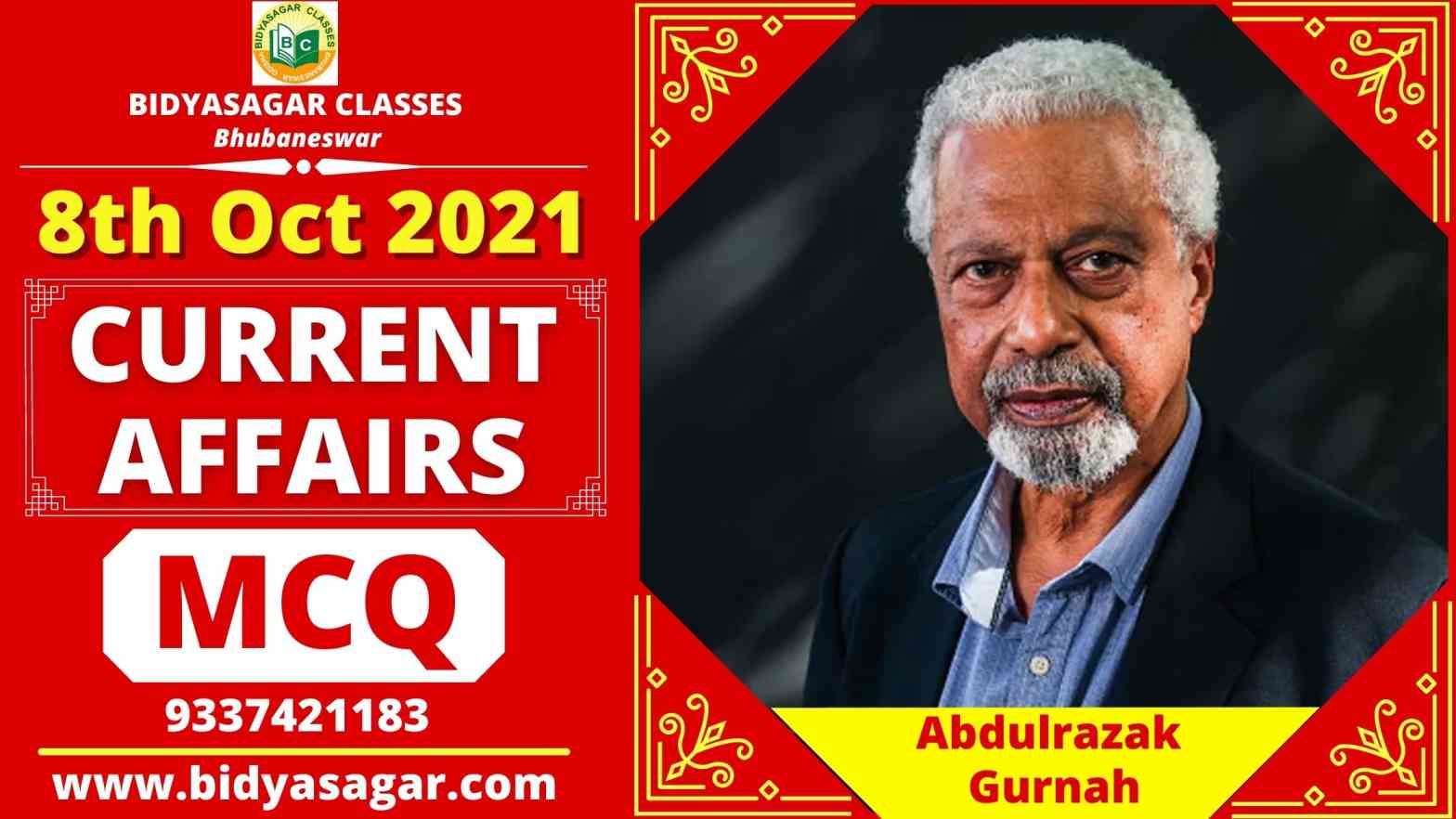 In this article, we will discuss MCQ on important current affairs of 8th October 2021 and their answers with explanations.

1. What is the estimated GDP growth rate of Indian economy as per the World Bank in the fiscal year 2021-22?
A) 7.2%
B) 9.1%
C) 7.5%
D) 8.3%
2. Prime Minister Narendra Modi recently dedicated 35 Pressure Swing Adsorption (PSA) Oxygen Plants to the nation. These plants have been developed under which fund?
A) PM CARES
B) India Infrastructure Project Development Fund (IIPDF)
C) Prime Minister’s National Relief Fund (PMNRF)
D) None of the above
3. In India the Air Force Day is marked every year on October 08. In 2021, which edition of the Air Force Day is being celebrated?
A) 72
B) 65
C) 91
D) 89
4. Who has won the 2021 Nobel Prize in Literature?
A) Kazuo Ishiguro
B) Abdulrazak Gurnah
C) Louise Gluck
D) Peter Handke
5. P L Haranadh has been appointed as the Chairman of which of these major ports?
A) Jawaharlal Nehru Port Trust
B) Deendayal Port Trust
C) Paradip Port Trust
D) Syama Prasad Mookerjee Port Trust
6. Which state has received the GI Tag for the Palghar’s Wada Kolam rice?
A) Maharashtra
B) West Bengal
C) Uttar Pradesh
D) Gujarat
7. Which company has recently launched the ‘postpe’ solution based on ‘Buy Now Pay Later’ (BNPL) platform?
A) Paytm
B) BharatPe
C) Whatsapp
D) PhonePe
8. Mukesh Ambani has topped the Forbes India Rich list in 2021, to retain his position as the wealthiest Indian for the ________consecutive year
A) 17th
B) 12th
C) 14th
D) 9th
9. The Second Friday of October is dedicated to the celebration of which day annually?
A) World Banana Day
B) World Vegan Day
C) World Coffee Day
D) World Egg Day
10. Which bank has become the first scheduled private sector bank to receive approval from the Government of India for collection of direct and indirect taxes?
A) Federal Bank
B) Kotak Mahindra Bank
C) IndusInd Bank
D) Bandhan Bank
11. Name the author of the book titled “Economist Gandhi: The Roots and the Relevance of the Political Economy of the Mahatma”?
A) Sanjeev Bikhchandani
B) Ashish Dhawan
C) Deep Kalra
D) Jaithirth Rao
12. In 2021, the World Investor Week (WIW) has been organised from October 04 to 10, 2021. Which organisation organises the annual event?
A) International Organization of Securities Commissions (IOSCO)
B) Financial Stability Board (FSB)
C) Financial Action Task Force (FATF)
D) Organisation for Economic Co-operation and Development (OECD)
13. Recently who has recommended the widespread use of the world’s first malaria vaccine on children?
A) World Bank
B) World Health Organization
C) IMF
D) NITI Aayog
14. Which organization has recently released its new report titled “The State of Climate Services 2021: Water”?
A) World Health Organization
B) World Meteorological Organization
C) World Bank
D) Ministry of Finance
15. For which year has Japan been ranked first in the Henley Passport Index’s Passport Ranking 2021?
A) First
B) Third
C) Fourth
D) Fifth
16. National Tiger Conservation Authority has declared Guru Ghasidas National Park and Tamor Pingla Wildlife Sanctuary of which state as new tiger reserves?
A) Kerala
B) Punjab
C) Chhattisgarh
D) Bihar
17. Anshu Malik has recently become which Indian woman to reach the finals of the World Championships?
A) First
B) Second
C) Third
D) Fourth
18. Prime Minister Narendra Modi has recently dedicated how many Pressure Swing Absorption Oxygen Plants to the nation at a program in Uttarakhand?
A) 12
B) 24
C) 35
D) 47
19. Mr. P.L. Harnadh has recently taken over as the chairman of which port trust?
A) Shyama Prasad Mukherjee Port Trust
B) Paradip Port Trust
C) Mumbai Port Trust
D) Chennai Port Trust
20. Which of the following has recently started transmission system for Rajasthan solar power sector?
A) NITI Aayog
B) Planning Commission
C) Powergrid Khetri Transmission System Ltd
D) World Bank

1. D
The World Bank has estimated India’s real Gross Domestic Product (GDP) in the current fiscal year 2021-22 to grow by 8.3% in its latest economic update for South Asia.
2. A
Prime Minister Narendra Modi dedicated 35 Pressure Swing Adsorption (PSA) Oxygen Plants to the nation on October 07, 2021 through video-conferencing, during an event at AIIMS Rishikesh, Uttarakhand. These 35 PSA Oxygen Plants have been established under PM CARES, across 35 States and Union Territories.
3. D
The Air Force Day is observed every year on 8 October in India.The Air Force Day 2021 marks the 89th anniversary of the official foundation day of the Indian Air force.
4. B
Abdulrazak Gurnah, a Tanzanian novelist has been awarded the 2021 Nobel Prize in Literature. Abdulrazak Gurnah writes in English and is based in the United Kingdom.
5. C
Shri P L Haranadh, an Indian Railway Traffic Service (IRTS) officer of 1994 batch, has been appointed as the new Chairman of Paradip Port Trust (PPT).
6. A
Wada Kolam, a rice variety widely grown in Palghar district in Maharashtra has received the ‘Geographical Indication’ (GI) tag, which means the product now gets unique identity as well as wider market base.
7. B
Fintech company BharatPe has launched ‘PostPe’, a new solution to provide credit to customers on the ‘Buy Now Pay Later’ (BNPL) platform.Using the postpe solution, customers can avail interest-free credit limit of up to Rs 10 lakh.
8. C
The Reliance Industries Limited (RIL) Chairman Mukesh Ambani has topped the Forbes India Rich list for 2021, released on October 07, 2021. The list ranks India’s 100 richest Indians.He has retained his position as the wealthiest Indian for the 14th consecutive year on Forbes India list, since 2008.The tycoon added $4 billion to his net worth in 2021, to bring his total fortune to $92.7 billion.
9. D
The World Egg Day is celebrated worldwide on the ‘Second Friday of October’ month each year since 1996.In 2021, the day is being observed on October 08, 2021.The theme for 2021 World Egg Day is “Eggs for all: Nature’s perfect package”
10. B
The Kotak Mahindra Bank (KMBL) has received approval from the Government of India for collection of direct and indirect taxes, such as income tax, Goods and Services Tax (GST) etc, through its banking network. Following the announcement, the KMBL has become the first scheduled private sector bank to receive permission to take part in government-related business.
11. D
Indian Entrepreneur and writer Jaithirth Rao, popularly known as Jerry Rao, has come out with a book on Mahatma Gandhi titled “Economist Gandhi: The Roots and the Relevance of the Political Economy of the Mahatma”
12. A
The World Investor Week (WIW) is an initiative promoted by the International Organization of Securities Commissions (IOSCO) to raise awareness about the importance of investor education and protection and highlight the various initiatives of securities regulators in these two critical areas.In 2021, the 5th annual WIW is being observed between October 04 and October 10, 2021.
13. B
The World Health Organization has recently recommended the widespread use of the world’s first malaria vaccine on children. Which has been called a great achievement for science, children’s health and malaria control. This vaccine is the world’s first vaccine against mosquito-borne disease.
14. B
The World Meteorological Organization has recently released its new report titled “The State of Climate Services 2021: Water”. In which information has been given about the world’s climate as well as water and water pollution. According to the report, climate change increases water-related threats such as floods and droughts.
15. B
Japan has been ranked first for the third year in a row in the Henley Passport Index’s passport ranking 2021. The Henley Passport Index lists the world’s most travel-friendly passports annually. Whereas Japan and Singapore have the most powerful passports in this year’s ranking. Also, South Korea and Germany are in second place.
16. C
The National Tiger Conservation Authority has recently declared Guru Ghasidas National Park and Tamor Pingla Wildlife Sanctuary of Chhattisgarh government as new tiger reserves. It is also the fourth tiger reserve of Chhattisgarh. The Guru Ghasidas National Park and Tamor Pingla Wildlife Sanctuary in Chhattisgarh is spread over an area of 1,44,000 hectares and 60,850 hectares.
17. A
Anshu Malik recently became the first Indian woman to reach the finals of the World Championships. With this, he has secured a medal by winning the semi-finals in the 57 kg category. She achieved this feat by defeating Junior European Champion Solomia Vink.
18. C
Prime Minister Narendra Modi has recently dedicated 35 Pressure Swing Absorption Oxygen Plants to the nation during the program at AIIMS Rishikesh, Uttarakhand. PM Modi has said that 4,000 new oxygen plants will be set up in India under the PM Cares Fund.
19. B
An IRTS officer of 1994 batch Shri P.L. Harnadh has recently taken over as the chairman of Paradip Port Trust. Mr. P.L. Harnadh holds MSc and PhD degrees from the Indian Agricultural Research Institute, Pusa, New Delhi. He has served in the Indian Railways for 22 years and 5 years in the Ministry of Shipping during tenure of 27 years.
20. C
POWERGRID KHETRI TRANSMISSION SYSTEM LIMITED has recently introduced transmission system for Rajasthan Solar Energy Sector. The transmission project includes a new 765 kV sub-station at Khetri.