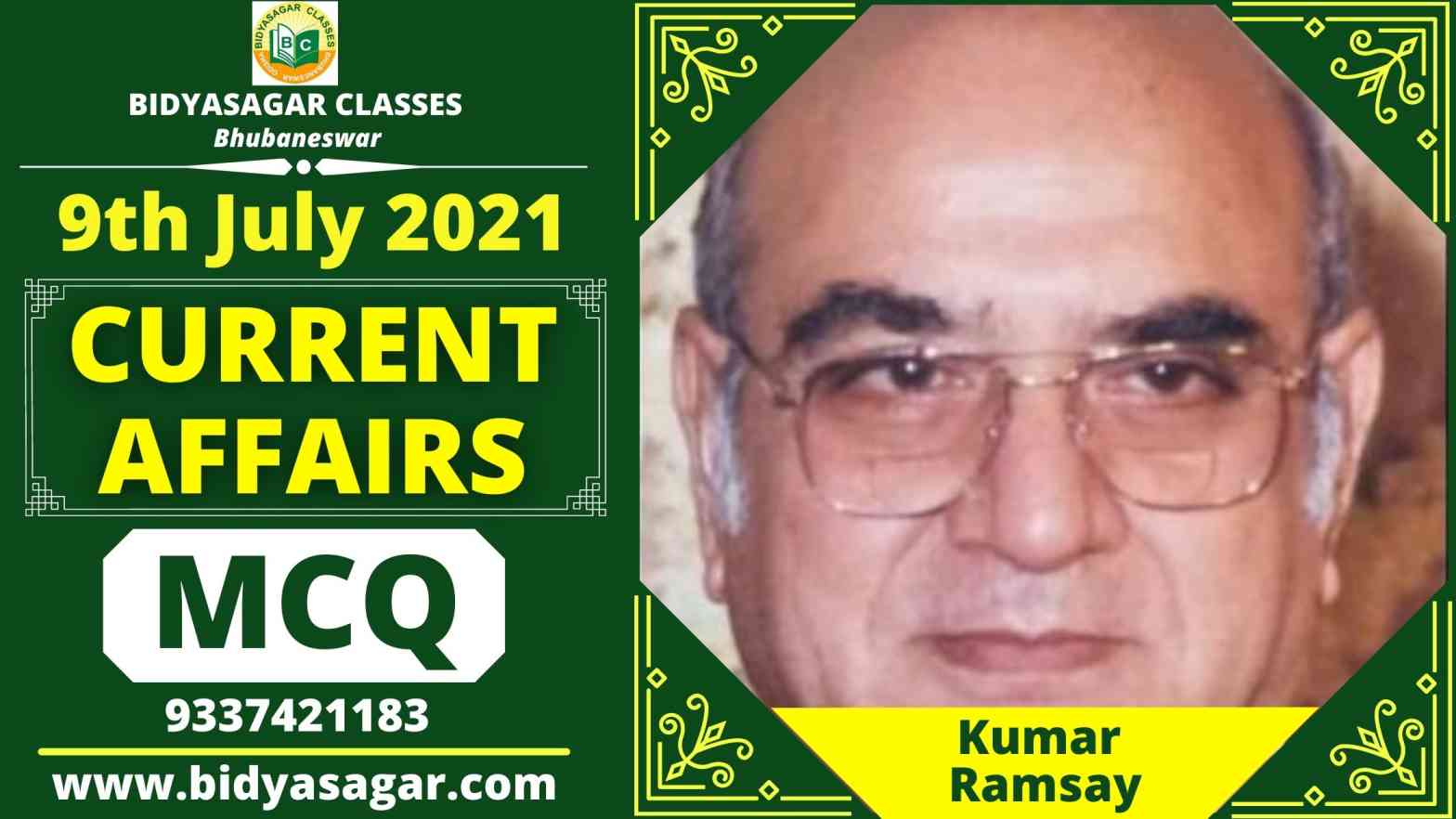 In this article, we will discuss MCQ on important current affairs of 9th July 2021 and their answers with explanations.

1. What is the estimated GDP growth rate of the Indian economy for fiscal 2021-22 as per Fitch Ratings latest prediction?
A. 11 percent
B. 12 percent
C. 10 percent
D. 9 percent
2. ______ has partnered with Mastercard to launch ‘MandateHQ’.
A. PhonePe
B. Instamojo
C. BillDesk
D. Razorpay
3. Which among these sectors have recently been included as MSMEs sector by government for purpose of Priority Sector Lending?
A. Retail and Wholesale trade
B. Forestry and logging
C. Fishing and aquaculture
D. Bee- keeping and production of honey and beeswax
4. Indian Army has recently inaugurated a war memorial of Capt Gurjinder Singh Suri(who died during 1999 ‘Birsa Munda’ operation) near__________________.
A. Srinagar
B. Sonmarg
C.Drass
D. Gulmarg
5. Which of the following designation is associated with N Venudhar Reddy?
A. Director-General of PIB
B. CEO of NITI Aayog
C. Chief Information Commissioner
D. Director-General of All India Radio
6. Keshav Datt passed away recently. He was associated with which sport?
A. Shooting
B. Hockey
C. Badminton
D. Tennis
7. Which of the following two cities of India ready to host Women’s Asian Cup 2022?
A. Mumbai and Pune
B. Bhubaneswar and Ahemdabad
C. Chandigarh and Gandhinagar
D. Mumbai and Delhi
8. Who has been awarded the Humboldt Research Award for Economics?
A. Amartya Sen
B. Kaushik Basu
C. Raghuram Rajan
D. Jagdish Bhagwati
9. Which of the following metro rail corporation has launched India’s first FASTag or Unified Payments Interface (UPI)-based parking facility?
A. CMRL
B. MMRC
C. DMRC
D. NMRC
10. Haiti President Jovenel Moise assassinated at his home. What is the currency of Haiti?
A. Florin
B. Gourde
C. Boliviano
D. Colón
11. The Indian Army has named one of its firing ranges in Kashmir after Bollywood actress _______.
A. Aishwarya Rai Bachchan
B. Priyanka Chopra
C. Deepika Padukone
D. Vidya Balan
12. Name the newly appointed cabinet minister for Health and Family Welfare?
A. Sarbananda Sonowal
B. Narayan Rane
C. Piyush Goyal
D. Mansukh Mandaviya
13. Who among the following takes oath for the new minister for Education?
A. Dharmendra Pradhan
B. Pralhad Joshi
C. Mukhtar Abbas Naqvi
D. Dr. Virendra Kumar
14. Name the new cabinet minister for Information and Broadcasting.
A. Mahendra Nath Pandey
B. Parshottam Rupala
C. G. Kishan Reddy
D. Anurag Singh Thakur
15. Bajaj Allianz General Insurance and __________ have entered into a corporate agency agreement for the distribution of Bajaj Allianz General Insurance’s products.
A. Canara Bank
B. State Bank of India
C. Bank of India
D. Bank of Baroda
16. Which of the following state’s former Chief Minister and Congress leader Virbhadra Singh has passed away recently at the age of 87?
A. Uttarakhand
B. Kerala
C. Gujarat
D. Himachal Pradesh
17. Prime Minister Narendra Modi has given the responsibility of Railway Ministry in the cabinet instead of Piyush Goyal?
A. Rajnath Singh
B. Ashwini Vaishnav
C. Nirmala Sitharaman
D. Hardeep Singh Puri
18. Aditya Mittal of India has recently become the Chess Grandmaster at the age of?
A. 12 Years
B. 14 Years
C. 16 Years
D. 18 Years
19. The Chief Minister of which of the following state Naveen Patnaik has recently approved 5 major steelmaking projects worth Rs 1.46 lakh crore?
A. Kerala
B. Gujarat
C. Maharashtra
D. Odisha
20. Who has been given the charge of the recently constituted Ministry of Cooperation?
A. Piyush Goyal
B. Amit Shah
C. Rajnath Singh
D. Hardeep Singh Puri

1. C
Fitch Ratings has revised its GDP growth projection for India in 2021-22 (FY22) to 10%. Earlier it has projected the same at 12.8%.
2. D
Razorpay has partnered with Mastercard to launch ‘MandateHQ’. It is a payment interface that will help card-issuing banks to enable recurring payments for their customers.
3. A
Ministry of Micro, Small and Medium Enterprises has decided to include Retail and Wholesale trade as MSMEs but only for the limited purpose of Priority Sector Lending.
4. D
Indian Army inaugurated war memorial of Capt Gurjinder Singh Suri who died during 1999 ‘Birsa Munda’ operation. On the occasion of the birthday of Captain Gurjinder Singh Suri, who died during the operation “Birsa Munda” in 1999, the Indian Army inaugurated a war memorial in memory of Captain in Gulmarg near the Line of Control (LOC).
5. D
N Venudhar Reddy, an Indian Information service, IIS Officer of 1988 batch today took charge as Director General of All India Radio.
6. B
India’s one of finest hockey players, a double Olympic gold medalist Keshav Datt passed away on 7 July at 95.
7. A
Women’s Asian Cup in India will be held in Mumbai and Pune after the Asian Football Confederation dropped Bhubaneswar and Ahemdabad as venues to minimise the travelling time for participants and ensure an “optimum environment” for a bio-secure bubble.
8. B
Indian economist Kaushik Basu has been awarded the Humboldt Research Award for Economics. The award was conferred on him by Professor Dr Hans-Bernd Schäfer of Bucerius Law School in Hamburg, Germany.
9. C
Delhi Metro Rail Corporation (DMRC) has launched India’s first FASTag or Unified Payments Interface (UPI)-based parking facility to reduce the time for entry and payment.
10. B
Haitian gourde is the currency of North American country, Haiti.
11. D
The Indian Army has named one of its firing ranges in Kashmir after Bollywood actress Vidya Balan. The Vidya Balan firing range is situated at Gulmarg in the Baramulla district of Jammu & Kashmir.
12. D
Mansukh Laxmanbhai Mandaviya is the Union Minister of Health & Family Welfare India and Chemical and Fertilizers.
13. A
Dharmendra Pradhan is an Indian politician and the Minister of Education and Minister of Skill Development and Entrepreneurship in the Government of India.
14. D
Anurag Singh Thakur is a member of the Lower House of Parliament in India from Hamirpur in Himachal Pradesh, and the current Minister of Sports, Youth Affairs and Minister of Information and Broadcasting.
15. C
Bajaj Allianz General Insurance and Bank of India have entered into a corporate agency agreement for the distribution of Bajaj Allianz General Insurance’s products.
16. D
Former Himachal Pradesh Chief Minister and Congress leader Virbhadra Singh has passed away recently at the age of 87. He got corona twice. He was born on 23 June 1934. His father Padam Singh was the king of Bushahr princely state. He won the Lok Sabha elections for the first time in the year 1962 from Mahasu seat. After this he was also elected to the Lok Sabha in 1967, 1971, 1980 and 2009.
17. B
Prime Minister Narendra Modi has recently made the biggest expansion in the cabinet so far. They have divided their portfolios to all the ministers. In the new cabinet list, the responsibility of the Ministry of Railways has been given to Ashwini Vaishnav instead of Piyush Gayle. A total of 36 new faces have got a place in the cabinet.
18. B
India’s Aditya Mittal has recently become the Chess Grandmaster at the age of 14. He has achieved this title in the Serbian Open. According to Chess.com, Aditya secured the first position with a score of 7/9. Along with this, he has also defeated 3 Grand Masters.
19. D
Odisha Chief Minister Naveen Patnaik recently approved 5 major steelmaking projects worth Rs 1.46 lakh crore, to make Odisha a ‘Steel Hub of India’ under “Vision 2030”. has given. The 26th High Level Sanctioning Authority of Odisha has given its in-principle approval to the projects.
20. B
The charge of the recently formed cooperative ministry has been entrusted to Union Home Minister Amit Shah. This Ministry of Cooperation will provide a separate administrative, legal and policy framework to strengthen the cooperative movement.