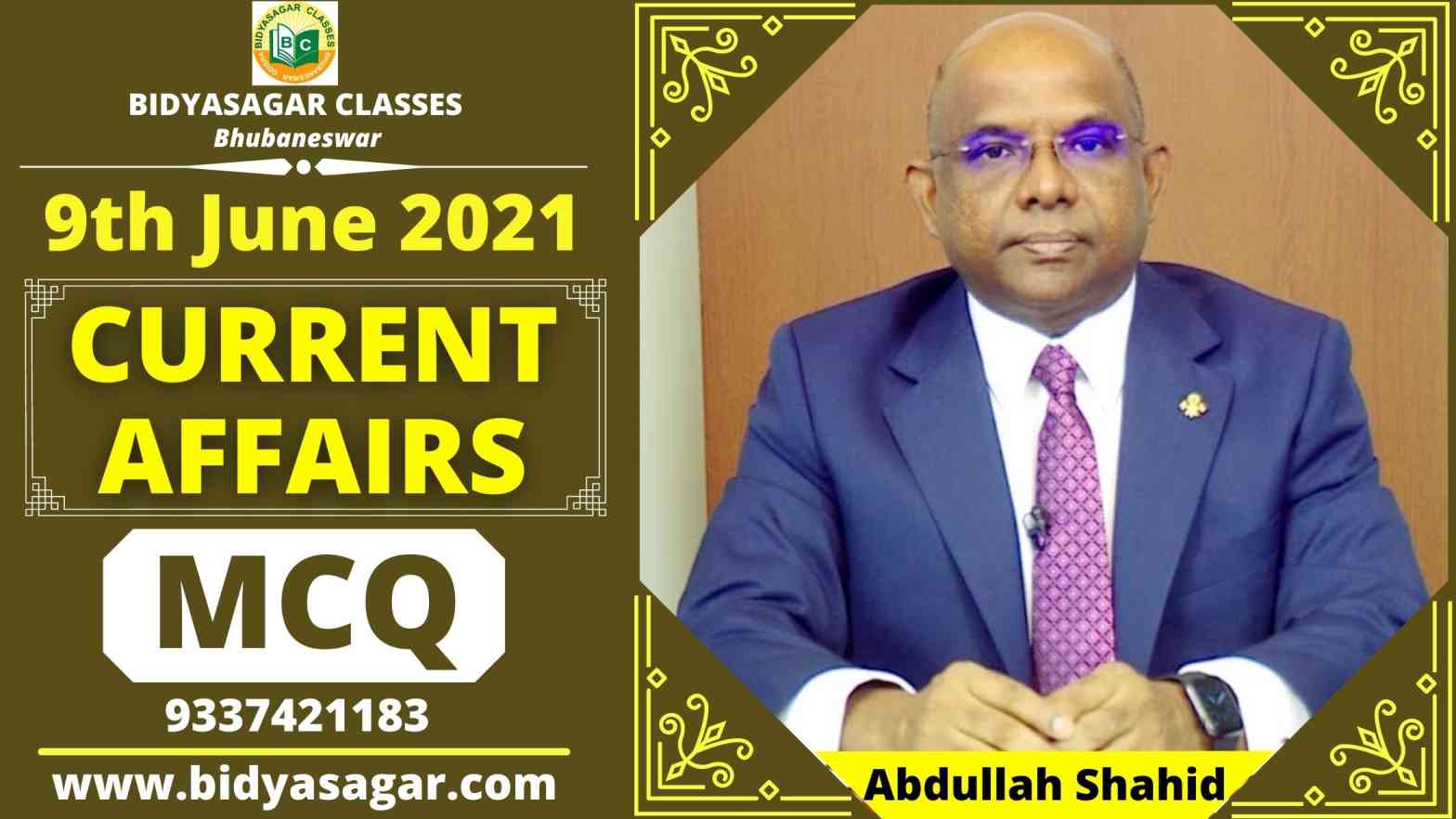 In this article, we will discuss MCQ on important current affairs of 9th June 2021 and their answers with explanations.

1.United Nations Decade on Ecosystem Restoration 2021-30, will be led by UNEP jointly with which organization?

A) Food and Agriculture Organization

B) World Wide Fund for Nature

2. Name the Indian organization which has recently become the signatory to the prestigious UN Global Compact’s CEO Water Mandate, which focuses on efficient water management.

3.Who among the following has approved the $500 million program to help boost India’s MSME sector?

4. Which Institute is at the top among the Indian institutes in the Top 100 of “THE Asia University Ranking 2021”?

6.Which of the following movie has won the best film award on environment conservation at the 67th National Films Awards 2021?

8. Which state has recently topped in the national performance grading index of school education for 2019-20 that released by the Centre?

9. Who among the following has appointed as the new chairman of the Petroleum and Natural Gas Regulatory Board (PNGRB)?

10.Which of the following international airport achieved a net energy neutral status in FY 2020-21?

11. __________ was elected President of the 76th United Nations General Assembly (PGA) with an overwhelming majority.

A) Innovation for a Sustainable Ocean

B) Gender and the Ocean

D) The Ocean: Life and Livelihoods

16. Recently Abdulla Shahid has been elected as the President of which session of the United Nations General Assembly?

17. Recently who has released an e-book on 20 reforms made in the Ministry of Defense in the year 2020?

18. Recently Bombay Stock Exchange has crossed the mark of how many crore registered users?

19. Which company has been fined by a French authority for misusing its market power in its online advertising business?

India’s largest power utility, NTPC Ltd, under the Ministry of Power, has become a signatory to the prestigious UN Global Compact’s CEO Water Mandate, that focus on efficient water management.

The World Bank’s Board of Executive Directors has approved a USD 500 million programs to support India’s nationwide initiative to revitalize the MSME sector, which has been heavily impacted by the COVID-19 crisis.

World Ocean Day is observed globally on 8th June every year. This day is observed to raise global awareness about the importance of the ocean in our lives and the ways through which we can protect it.

Punjab topped the national performance grading index of school education for 2019-20 released by the Centre.

The Kempegowda International Airport here has achieved net energy neutral status in the Financial Year 2020-21 as part of its sustainability goals.

Oman has been named as the host of the inaugural International Hockey Federation (FIH) Hockey5s World Cup.

“The Ocean: Life and Livelihoods” is the theme for World Oceans Day 2021, as well as a declaration of intentions that launches a decade of challenges to get the Sustainable Development Goal 14, “Conserve and sustainably use the oceans, seas and marine resources”, by 2030.

The Indian Navy is set to receive its first set of multi-role helicopters as America is set to hand over three MH-60 Romeo helicopters to the force in the United States in July.

Maldives Foreign Minister Abdulla Shahid has recently been elected as the President of the 76th United Nations General Assembly. His term will be 2021-22. He defeated Dr. Zalmay Rasool Ho, former Foreign Minister of Afghanistan, in the election of the President of the 193-member General Assembly. In the election, Abdullah Shahid got 143 votes while Rasool got 48 votes.

Defense Minister Shri Rajnath Singh has recently released an e-book on 20 reforms made in the Ministry of Defense in the year 2020. In this e-book, the government’s resolve to make the defense sector stronger and more efficient has been told.

The French authorities recently investigated Google’s Mountain View California company, in which it found that Google misused its market power in its online advertising business. For which the authority has fined Google 220 million euros.

Recently India defeated Bangladesh 2-0 and registered their first win in the combined qualifiers of FIFA World Cup 2022 and Asia Cup 2023, Sunil Chhetri scored 79th and 92nd in this match. Scored a goal in minutes. Along with this, Sunil Chhetri has recently overtaken Lionel Messi to reach 10th place with 74 goals in international matches, while Messi is in 12th place with 72 goals.