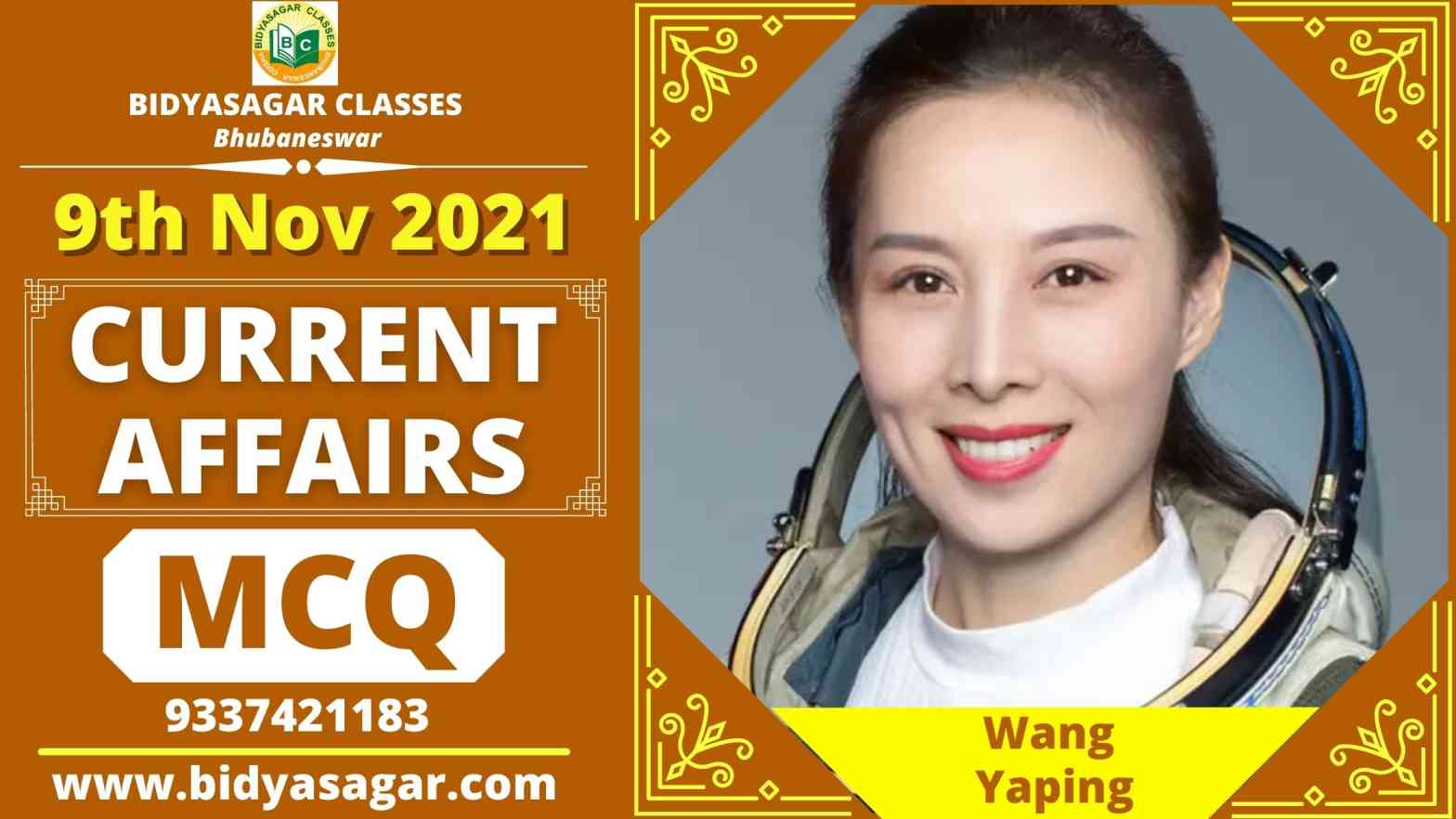 In this article, we will discuss MCQ on important current affairs of 9th November 2021 and their answers with explanations.

1. Which Indian city has joined UNESCO’s Creative Cities Network 2021?
a) Lucknow
b) Bodh Gaya
c) Srinagar
d) Jaipur
2. Which state retained its top spot in the National Logistics Index – LEADS 2021?
a) Assam
b) Tamil Nadu
c) Odisha
d) Gujarat
3. Astronaut Wang Yaping became the first woman from which country to walk in space?
a) South Korea
b) China
c) Japan
d) Malaysia
4. When is National Legal Services Day observed?
a) November 8th
b) November 9th
c) November 10th
d) November 11th
5. Who will become the first Indian celebrity to have his own digital avatar in a game-based metaverse?
a) Rajinikanth
b) Akshay Kumar
c) Shah Rukh Khan
d) Kamal Haasan
6. Which state government has launched the ‘Shramik Mitra’ scheme to provide benefits to construction workers?
a) Delhi
b) Maharashtra
c) Uttar Pradesh
d) Madhya Pradesh
7. What is the name of the Eiffel Tower-sized asteroid that is heading towards Earth in December?
a) Apophis
b) 1996 VB3
c) 2021 UA12
d) 4660 Nereus
8. Which nation has delivered the largest and most advanced warship to Pakistan?
a) US
b) Russia
c) China
d) France
9. “Wang Yaping” has recently become which Chinese female astronaut to walk in space?
a) First
b) Second
c) Third
d) Fourth
10. President Ram Nath Kovind has recently honored how many people with Padma Awards for the year 2020?
a) 55 people
b) 85 people
c) 141 people
d) 212 people
11. According to the 12th biennial environmental performance index, what is the rank of India?
a) 72nd place
b) 112th place
c) 168th place
d) 212th place
12. Recently famous singer and host Aditya Narayan has been honored with the honorary doctorate of which award?
a) Mahatma Gandhi Award
b) Jawaharlal Nehru Award
c) Padma Award
d) Nelson Mandela Peace Prize
13. Which day is celebrated all over the world on 9th November?
a) World Hindi Day
b) World Tamil Day
c) World English Day
d) World Urdu Day
14. Which of the following state government has set up the first special purpose vehicle to manage natural conservation missions?
a) Government of Punjab
b) Government of Maharashtra
c) Government of Kerala
d) Government of Tamil Nadu
15. Which of the following state’s cabinet has approved the “Industrial Relations Rules, 2021” to protect the rights of employers and employees?
a) Bihar
b) Gujarat
c) Delhi
d) Assam

1. C
Srinagar joined the UNESCO Creative Cities Network 2021 on November 8, 2021 under the Crafts and Folk Arts category. This is a major recognition of the arts and crafts of Jammu & Kashmir.
2. D
Gujarat retained its top rank among 21 states on the National Logistics Index – LEADS 2021 due to well-developed infrastructure and services. The state was ranked number one in the LEADS 2019 index as well. There was no ranking in 2020 due to the COVID-19 pandemic.
3. B
Astronaut Wang Yaping became the first Chinese woman to walk in space on November 7, 2021, during her first extravehicular operation on the Shenzhou-13 mission. The 41-years-old was a crewmember of China’s Shenzhou-13 mission. She carried out extravehicular activities for over 6.5 hours along with her colleague Zhai Zhigang.
4. B
The National Legal Services Day is observed annually in India on November 9th to commemorate the enactment of the Legal Services Authorities Act 1987. The day aims to create awareness among people regarding various provisions under the Legal Services Authorities Act as well as the rights osf the litigants.
5. D
Megastar Kamal Haasan has announced his plans to become the first Indian celebrity to have his own digital avatar in a game-based metaverse. The actor announced he will enter into digital space with the Non-Fungible Tokens (NFTs) collection and later launch his personal museum as well in an upcoming game-based metaverse from Fantico.
6. A
Delhi Government on November 8, 2021 launched the ‘Shramik Mitra’ scheme to ensure benefits of government schemes reach construction workers in the national capital. Under the scheme, a total of 800 Shramik Mitras will reach out to the construction workers on their doorstep and make them aware regarding the schemes.
7. D
An asteroid the size of the Eiffel Tower is heading towards Earth in December, according to NASA. According to NASA, the asteroid called 4660 Nereus will be 2.4m miles away from the Earth on December 11, which is a close pass but distant enough to not hit the planet.
8. C
China has delivered the largest and most advanced warship to Pakistan. Designed and built by China State Shipbuilding Corporation Limited (CSSC), the ship is technologically advanced and a highly capable platform with enormous surface-to-surface, surface-to-air and underwater firepower. It also has extensive surveillance potentials.
9. A
Recently “Wang Yaping” has become the first Chinese female astronaut to walk in space. Because she left the under-construction space station and participated in extracurricular activities with her male colleague Zhai Zhigang for more than six hours.
10. C
President Ram Nath Kovind has recently honored 141 people with Padma Awards for the year 2020 in the historic court of Rashtrapati Bhavan. This year it was announced to give Padma Vibhushan to 7 personalities, Padma Bhushan to 16 and Padma Shri to 118. This year 33 women have been honored with Padma Awards.
11. C
According to the 12th biennial Environmental Performance Index, India is in worse condition than its neighbors with 168th rank. According to the World Health Organization and UNICEF, any type of pollutant attacks children the most because their bodies are not fully developed.
12. D
Recently, famous singer and host Aditya Narayan has been awarded the honorary degree of Nelson Mandela Peace Prize Doctorate for playback singing and acting. He has hosted 4 season of “Sa Re Ga Ma Pa” which is 170 episodes.
13. D
World Urdu Day is celebrated all over the world on 9th November. On this day, Urdu Development Organization based in Delhi and some welfare organizations of the country give awards to Urdu poets, writers and teachers on that day.
14. D
Government of Tamil Nadu has recently set up the first special purpose vehicle “Tamil Nadu Green Climate Company” to manage natural conservation missions. The company will manage three important natural conservation missions (Tamil Nadu Climate Change Mission, Tamil Nadu Wetlands Mission and Tamil Nadu Green Movement Mission).
15. D
In order to protect the rights of employers and employees, the Assam cabinet has approved the “Industrial Relations Rules, 2021”. The Industrial Relations Rules have been framed to amalgamate, simplify and rationalize the provisions of the three Central Labor Codes relating to industrial relations.