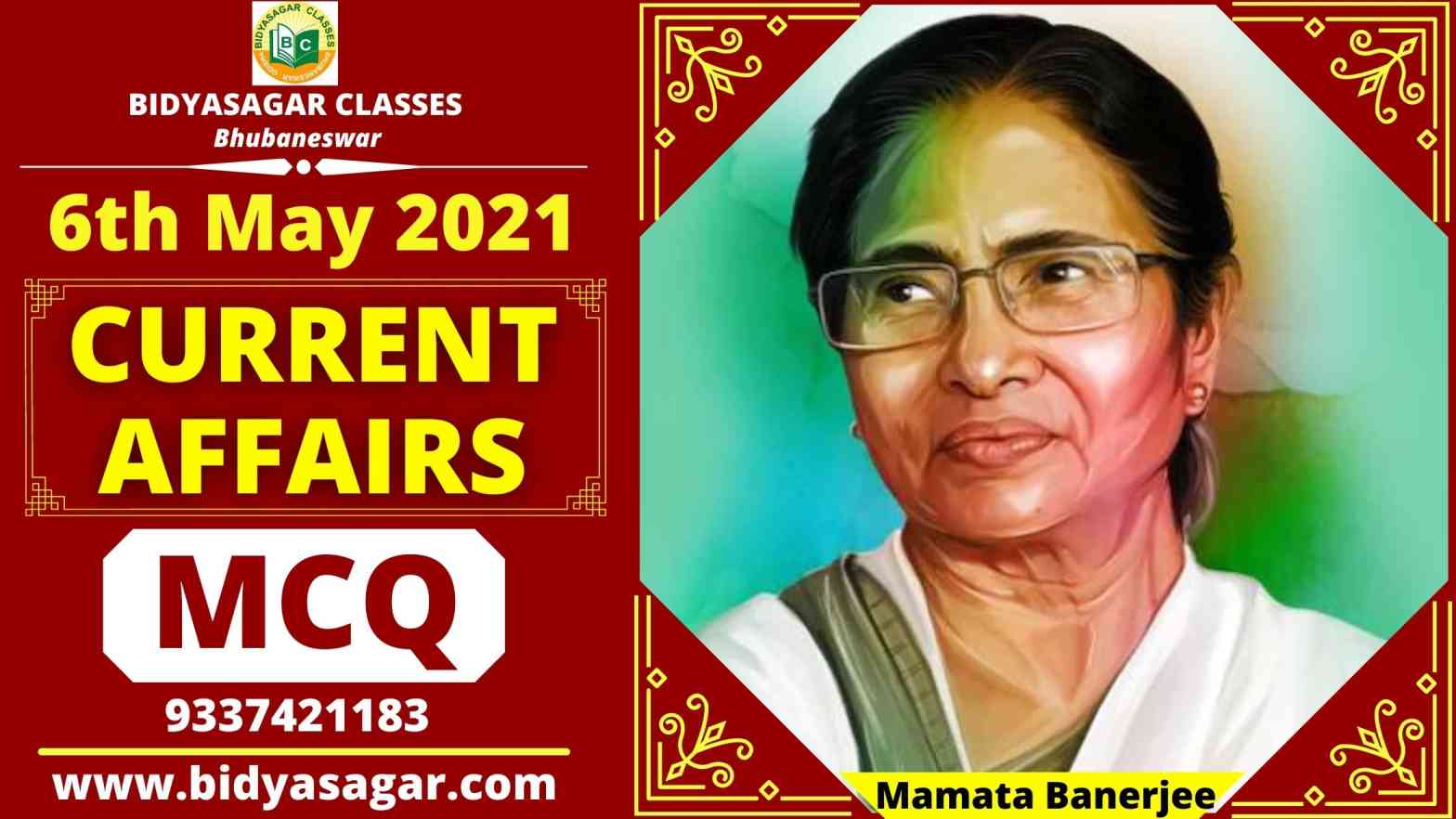 1. The Cabinet Committee on Economic Affairs has recently given in-principle approval for strategic disinvestment of which bank?

2. Which of the following times has Mamata Banerjee recently taken over as the Chief Minister of Bengal?

3. Recently who has announced to give 2 months free ration to 72 lakh poor people of Delhi?

4. Dr. Manas Bihari Verma, who played a key role in making which Indian fighter aircraft, has passed away recently?

5. Indian Army has recently started the first green solar energy plant in the northern part of which state?

6. RBI has recently announced a loan of how many crores to cover emergency health services in the Corona era?

7. Recently under which scheme the first supply of used cooking-oil-based biodiesel has been launched?

B. Expression of Interest Scheme

8. Recently which bank has been fined by RBI for violating prudential norms?

9. How much amount has been allocated by RBI towards a special on-tap liquidity facility announced for banks to lend to entities for access to emergency health security during the second wave of Covid-19?

10. Mamata Banerjee has been sworn in as the Chief Minister of West Bengal after a massive win in the 2021 Assembly election. This win is her __________ consecutive win as the head of the state

11. What is the estimated GDP growth rate of India as per S&P Global Ratings for the financial year 2021-22?

12. When is the International No Diet Day celebrated?

A) First Thursday of May

13. The world’s largest aircraft by an American company ‘Stratoluanch’ successfully completed the second test flight recently. What is the name given to this massive aircraft?

14. Who is the winner of the 2021 UNESCO/Guillermo Cano World Press Freedom Prize?

15. India has recently launched an ambitious 10-year road map, with which country, to elevate the bilateral relationship to a comprehensive strategic partnership and more than double bilateral trade by 2030?

B) the United States

16. Cricket player Nuwan Zoysa has been banned by ICC for 6 years from all forms of the game for violating ICC’s anti-corruption code. Did he play for which country?

17. What amount of liquidity support has been announced by RBI for the small finance banks (SFBs) under a special long-term repo operation (LTRO)to lend to MFIs amid the COVID-19 crises?

18. The Reserve Bank of India has announced a restructuring of loan resolution frame 2.0, for individual borrowers and small businesses, who did not take restructuring earlier and the loan were standard as of March 2021. The outstanding loan of these borrowers must be up to ___________ to avail the facility

19. Recently Samsung pledged how much amount to India to fight against Covid 19?

20. Recently MK Stalin was sworn in as Chief Minister of which state?

Delhi Chief Minister Arvind Kejriwal has recently announced to give 2 months free ration to 72 lakh poor people of Delhi. Along with this, he has announced to provide assistance of Rs 5000 to the auto and taxi driver of Delhi. The government of Delhi has announced to help registered laborers in Delhi.

Dr. Manas Bihari Verma, who played a key role in making India’s fighter aircraft Tejas, recently passed away at the age of 78. He was an ally of former President Kalam. The Padma Shri was awarded for this matchless contribution.

The Indian Reserve Bank (RBI) has recently announced a loan of 50000 crores for the completion of emergency health services in the Corona era in the country. In addition, the bank has announced Resolution Framework 2.0 to provide relief to various sectors.

Petroleum Minister Dharmendra Pradhan recently launched the first supply of used cooking oil-based biodiesel blended diesel from Hut Indian Oil under the Expression of Interest scheme. The purpose of which is to boost the biodiesel supply manufactured in the country and reduce import dependence.

Reserve Bank of India recently imposed a fine of Rs 3 crore on ICICI Bank for violating prudential norms. ICICI Bank has been fined for not following the rules of “classification, valuation and prudential norms of investment portfolios of banks”.

The Reserve Bank of India (RBI) Governor Shaktikanta Das has announced a Covid-19 healthcare package of Rs 50,000 crore on May 05, 2021, for lending to entities such as vaccine makers, medical equipment suppliers, hospitals, and related sectors, besides the patients in need of funds for treatment. The new on-tap special liquidity facility of Rs 50,000 crore will be made available to the banks at the repo rate, for access to emergency health security amid the economic stress due to the second wave of Covid-19 in India. Banks can give loans under this facility till March 31, 2022. This Covid loan will be provided for a tenure of up to 3 years and will be classified as a priority sector loan till repayment or maturity.

Mamata Banerjee has been sworn in as the Chief Minister of West Bengal on May 05, 2021, for the third consecutive term, after a massive win in the state assembly elections 2021. The ruling All India Trinamool Congress (TMC) supremo was administered the oath of office and secrecy by state Governor Jagdeep Dhankhar.

The US-based S&P Global Ratings has lowered the GDP growth forecast of the Indian economy to 9.8 percent for the financial year 2021-22 (FY22).

International No Diet Day is observed on May 6, and its symbol is a light blue ribbon.

The world’s largest plane ‘Stratoluanch Roc’ successfully completed a test flight for a second time recently over the Southern California desert. The test flight lasted for about three hours and 14 minutes and the vehicle reached an altitude of 14,000-feet (about 2.6 miles) at a top speed of 199 mph.

Investigative journalist and media executive Maria Ressa of the Philippines has been named as the winner of the 2021 UNESCO/Guillermo Cano World Press Freedom Prize. The award carries prize money of $25,000. Presently Ressa is the CEO of the Rappler, a Philippine online news website.

The Prime Minister of India, Shri Narendra Modi, and his British counterpart Boris Johnson held a virtual Summit meeting on May 04, 2021. During the Summit meeting, both the leaders unveiled an ambitious 10-year road map to elevate the India-UK bilateral relationship to a comprehensive strategic partnership. The UK prime minister Boris Johnson announced a new India-UK trade investment worth £1 billion. Apart from this, India and the UK inked nine pacts.

The former Sri Lanka cricketer and coach Nuwan Zoysa has been banned from all cricket for six years by the International Cricket Council (ICC). The ICC Anti-Corruption Tribunal found him guilty of breaching the ICC anti-corruption code

A special long-term repo operation (LTRO) has been announced for small finance banks (SFBs) worth Rs 10,000 crore, to provide further lending support to NBFC-microfinance institutions (MFIs) and other MFIs (Societies, Trusts,  etc.) which are members of RBI recognized ‘Self-Regulatory Organisation’.

RBI has also opened up the second round of restructuring of loans mechanism for individual and small borrowers for up to two years. Individual borrowers and small businesses with loan outstanding of up to Rs 25 crore, who have not taken restructuring earlier and were standard as of March 2021, will be considered for restructuring till September 30, 2021.

Tech giant Samsung said it has pledged $5 million (Rs 37 crore), while Paytm Foundation intends to set up oxygen plants in 12-13 cities as part of efforts to support India’s battle against the COVID-19 pandemic.

Tamil Nadu Governor Banwarilal Purohit appointed DMK president M.K. Stalin as the Chief Minister and invited him to form the government in the State on May 7.