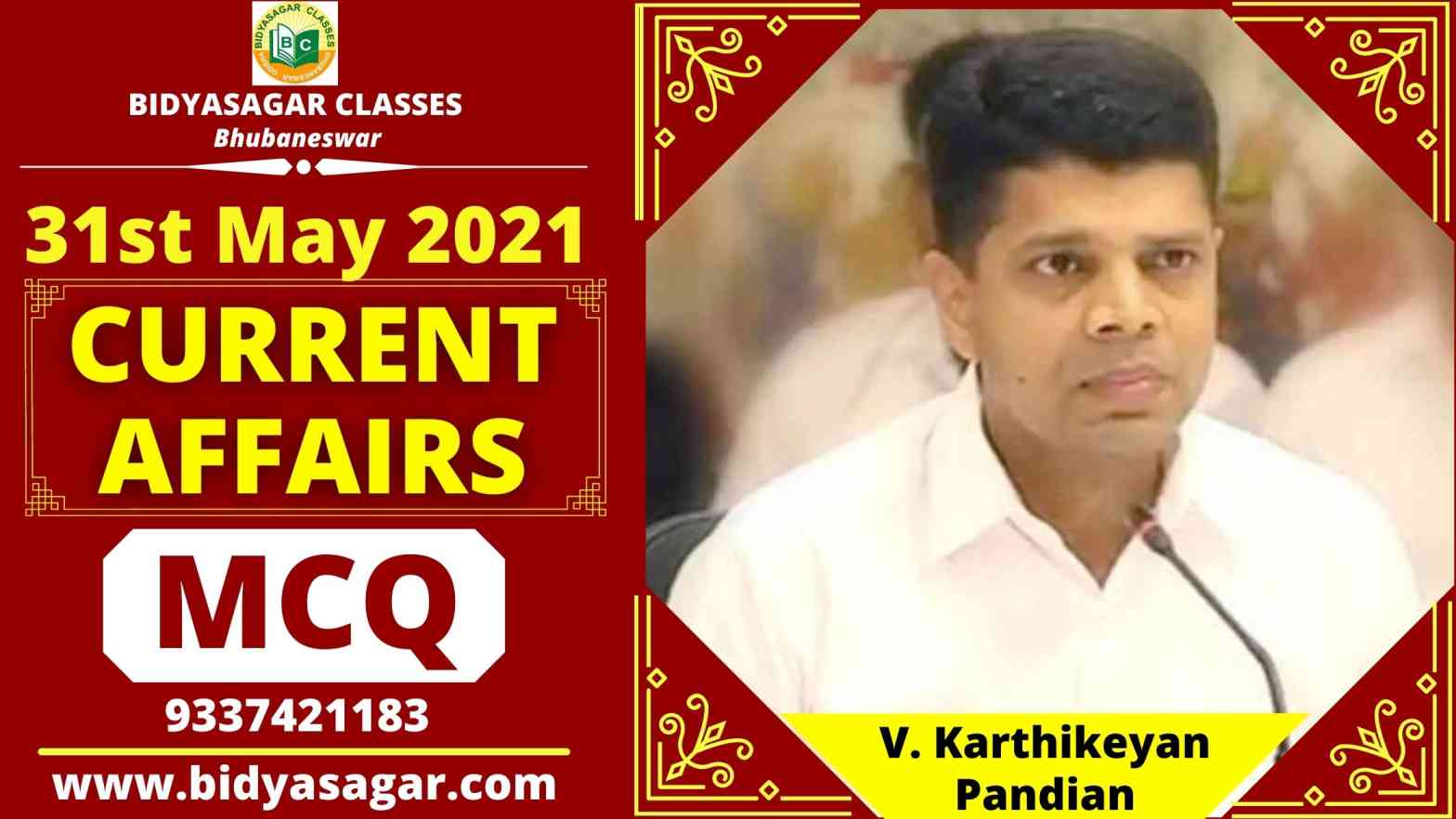 1.What is the total corpus of the “PM-CARES for Children” scheme, announced by the government for children who lost their parents to COVID-19?

2. World No Tobacco Day is observed on which day?

B) Last Monday of May

D) Last Sunday of May

3. Etienne Glichitch Award has been awarded to India for outstanding contribution to which sports?

5. Poul Schlueter, who has passed away recently was the former Prime Minister of which country?

6. Which state has launched the ‘Ankur Scheme’ to encourage citizens for planting trees during the monsoon?

7. Mary Kom has won a silver medal in the 2021 ASBC Asian Boxing Championships. She was competing in which category event?

8. Who is the author of the book ‘Stargazing: The Players in My Life’?

A) Tobacco : a threat to development

B) Commit to quit

12. Name the Indian who has been awarded the FIH Presidents Award for a contribution towards the development and promotion of hockey.

13. Which scheme has been launched by the Ministry of Education for mentoring young authors?

15. Which volcano has recently erupted in the Democratic Republic of Congo?

16. Which state has announced a Fixed Deposit of INR 5 lakhs for the children who lost their parents due to COVID-19?

17. Which state government has launched ‘Bal Seva’ Yojana for children who lost their parents due to COVID-19?

18. Which state has announced CM-Sishu Sewa Scheme for the children who lost their parents due to COVID-19?

19. Which campus of IIT has designed the ‘Smart Window’ material for cutting down carbon emissions?

The government has announced the “PM-CARES for Children” scheme under which fixed deposits will be opened in the names of such children from the PM-CARES fund. The total corpus of funds will be Rs 10 lakh for each child.

World No Tobacco Day (WNTD) is observed every year on 31 May, globally to inform the public of the dangers of using tobacco and to discourage the use of tobacco in any form.

Hockey India has been honored with FIH Honorary Awards by the International Hockey Federation (FIH) as part of its 47th FIH Congress, for its outstanding contributions to the sport of hockey. Hockey India won the Etienne Glichitch Award in recognition of its remarkable contribution to the growth and development of Hockey.

Poul Schlueter, the former Prime Minister of Denmark, has passed away. He was 92.

In Madhya Pradesh, Chief Minister Shivraj Singh Chouhan government has launched a scheme named ‘Ankur’ under which citizens will be awarded for planting trees during monsoon. Citizens taking part in this initiative will be given the Pranvayu Award, to ensure public participation in the program.

Indian pugilist Mary Kom, lost to two-time world champion Nazym Kyzaibay of Kazakhstan, to settle for a silver medal at the 2021 ASBC Asian Boxing Championships in Dubai on May 30, 2021. The five-time Asian Championships gold medallist Mary Kom was competing in a high-octane 51kg final.

Cricket all-rounder, commentator and coach, Ravi Shastri is now making his publishing debut, as he has penned a book titled ‘Stargazing: The Players in My Life’.

Chelsea defeated Manchester City 1–0 in the final, to lift the 2020-21 UEFA Champions League title, on May 29, 2021, played at the Estádio do Dragão in Porto, Portugal.

Decorated historian and author Vikram Sampath has come out with the second and concluding volume of the book on the life and works of Veer Savarkar titled “Savarkar: A contested Legacy (1924-1966)”. The book will hit the stands on July 26, 2021, under the publication of Penguin Random House India.

Apart from this, V. Karthikeyan Pandian, the IAS officer and Private Secretary to Chief Minister of Odisha Naveen Patnaik, has been recognized with FIH Presidents Award during the Congress

YUVA-Prime Minister’s Scheme has been launched by the Ministry of Education for mentoring young authors. Under this scheme, authors below the age of 30 years will be trained. It is a part of the India@ 75 Project.

RBI has imposed a penalty of INR 10 crores on HDFC Bank for irregularity in automobile loans. RBI found irregularities in the marketing and sale of third-party non-financial products.

Mount Nyiragongo has recently erupted in the Democratic Republic of Congo. The volcano is located in the Virunga National Park. It is responsible for around 40 % of the historical volcanic eruptions in Africa.

Tamil Nadu has announced a Fixed Deposit of INR 5 lakhs for the children who lost their parents due to COVID-19. Families left with only a single parent due to COVID-19 will be given immediate financial assistance of INR 3 lakhs.

Indian Institute of Technology (IIT), Guwahati has designed a ‘Smart Window’ material for reducing CO2 emissions. The material is capable of controlling the amount of heat and light passing through it. This property of the material will help in developing automatic climate control systems for the buildings.