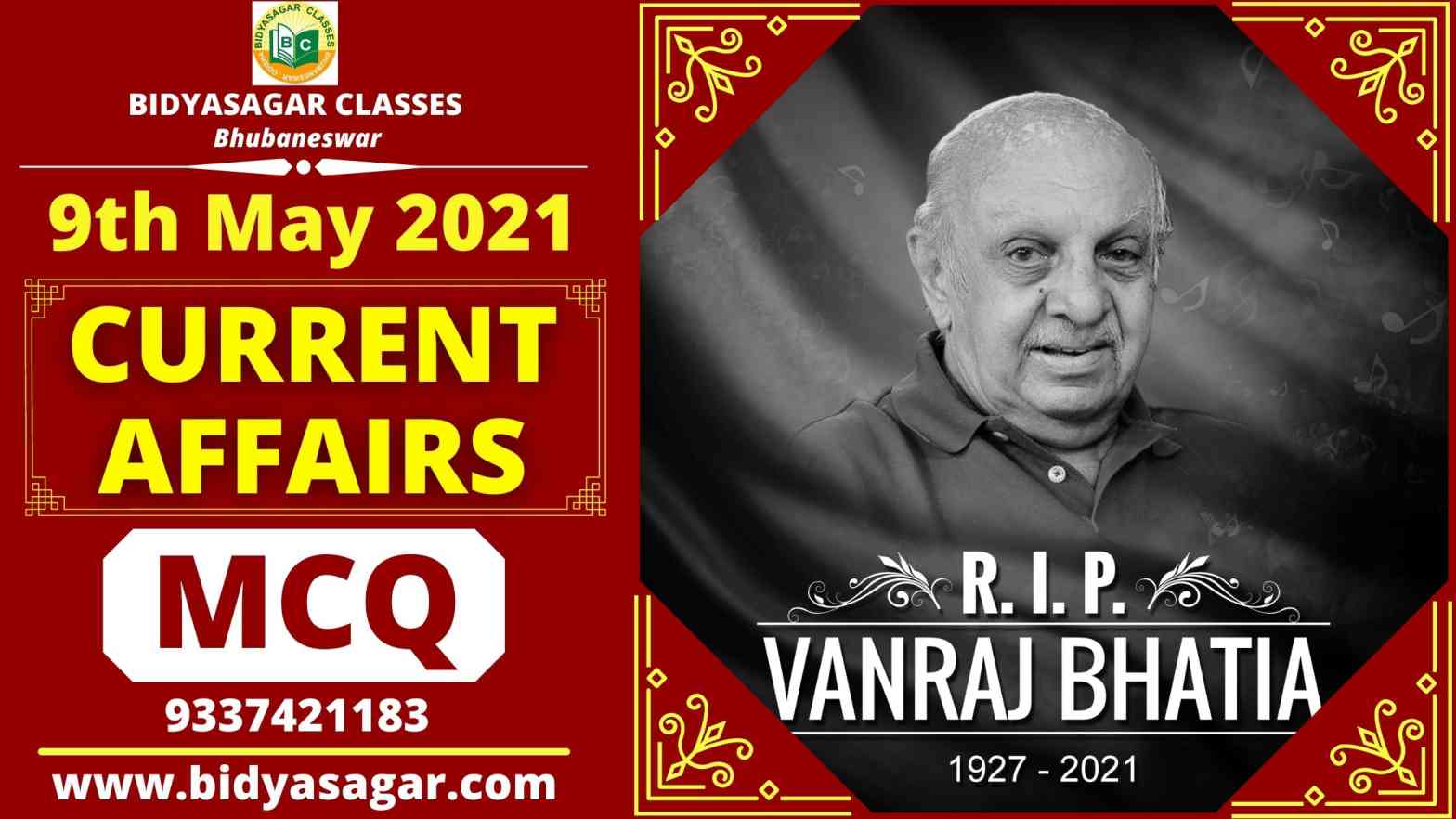 1. Who has recently given emergency approval to Corona’s drug 2-deoxy-D-glucose?

2. Who among the following has recently constituted a task force in India for the supply of medicines and oxygen?

3. Which of these education boards has recently launched the mobile app “Dost for Life”?

4. Which player has been honored with the Laureus World Sportsman of the Year 2021 award?

5. Renowned music composer Vanraj Bhatia has passed away recently at how old?

6. Who has recently launched an app to identify stolen cultural property around the world?

7. Legislation Which country has recently passed a law to lay off external FDI dangerous to national security?

8. In which country is an Israeli company, Ecopia producing solar technology in India for a historic project?

10. Which state has launched an Ayurvedic telemedicine facility for COVID patients?

11. N Rangasamy has sworn in as the Chief Minister of Puducherry for ____ time.

13. Who has been appointed as the Director of ICAR-IIRR?

14. Which state has recently declared ‘Journalists’ as frontline COVID warriors?

15. World Red Cross Day is globally observed in ____ May every year.

17. Who flagged the 1st consignment of UCO-based Bio-Diesel blended Diesel?

Recently DRDO’s Lab Institute of Nuclear Medicine created with the help of Dr. Reddy’s Laboratory, Corona’s Drug 2-Deoxy-D-Glucose was created as Drug Controller General of India has given emergency approval. The oxygen level of the patient has also improved in the trial of this drug.

Supreme Court has recently constituted a task force on the supply of medicines and oxygen in India. Which will tell about the measures needed for the availability of medicines and will also prepare a scientific and practical formula to supply oxygen to the states of the country.

Central Board of Secondary Education (CBSE) has recently launched a mobile app “Dost for Life” for students to help in the problems related to mental health. Which is available on Google’s Play Store for students from 9th to 12th. While the board had already issued a toll-free number for the students.

Well-known music composer Vanraj Bhatia has recently passed away at the age of 93 due to medical problems. He was awarded the National Award for Best Music Director for the 1988 film ‘Tamas’. While in the year 2012, he was given the Padma Shri, India’s highest honor.

Interpol has recently launched an app to identify stolen cultural property around the world. The name of this app is “ID-Art” which is on Google’s Play Store. is available.

Denmark has recently passed a law for the layoffs of external FDI dangerous to national security in the coming future of the country. Denmark’s law was made following security concerns over China’s Huawei bid to build a 5G network.

an Israeli company, Ecopia is producing solar technology in India for a landmark project in the United Arab Emirates. Which was started in partnership with the International Federation of Indo-Israel Chambers of Commerce. The tripartite partnership between the three countries was started for this project.

World Migratory Day 2021 was globally observed on 8th May to emphasize the need of conserving migratory birds and their habitats for protecting the environment. It is observed across the globe on the second Saturday in May and October bi-annually.

Haryana government has launched an Ayurvedic telemedicine facility for the COVID-19 patients. The facility will enable telephonic consultation with Ayurveda doctors by simply dialing 1075.

N Rangasamy has sworn in as the Chief Minister of Puducherry for the 4th time. He is also the Chief of All India NR Congress (AINRC).

India has begun the exports of organic millets to Denmark. The organic millets have been grown by the farmers of Uttarakhand. The millets will be exported by Just Organik.

Dr. R M Sundaram has been appointed as the Director of the Indian Council of Agricultural Research- Indian Institute of Rice Research, Hyderabad (ICAR-IIRR). He is currently serving as a scientist in rice biotechnology and molecular breeding.

The government of Odisha has recently declared ‘Journalists’ as frontline COVID warriors. A total of 6944 journalists are active in the state who will be covered under Gopabandhu Sambadika Swasthya Bima Yojana.

Haryana Police have launched ‘COVID-19 Hospital Transport Service’ for the needy patients who have got a severe infection of COVID-19. A total of 440 vehicles will be designated for the service.

Rupsi Airport is located in Assam. It has been made operational under Regional Connectivity Scheme- Ude Desh Ka Aam Nagrik (RCS-UDAAN). It is the 7th airport of Assam