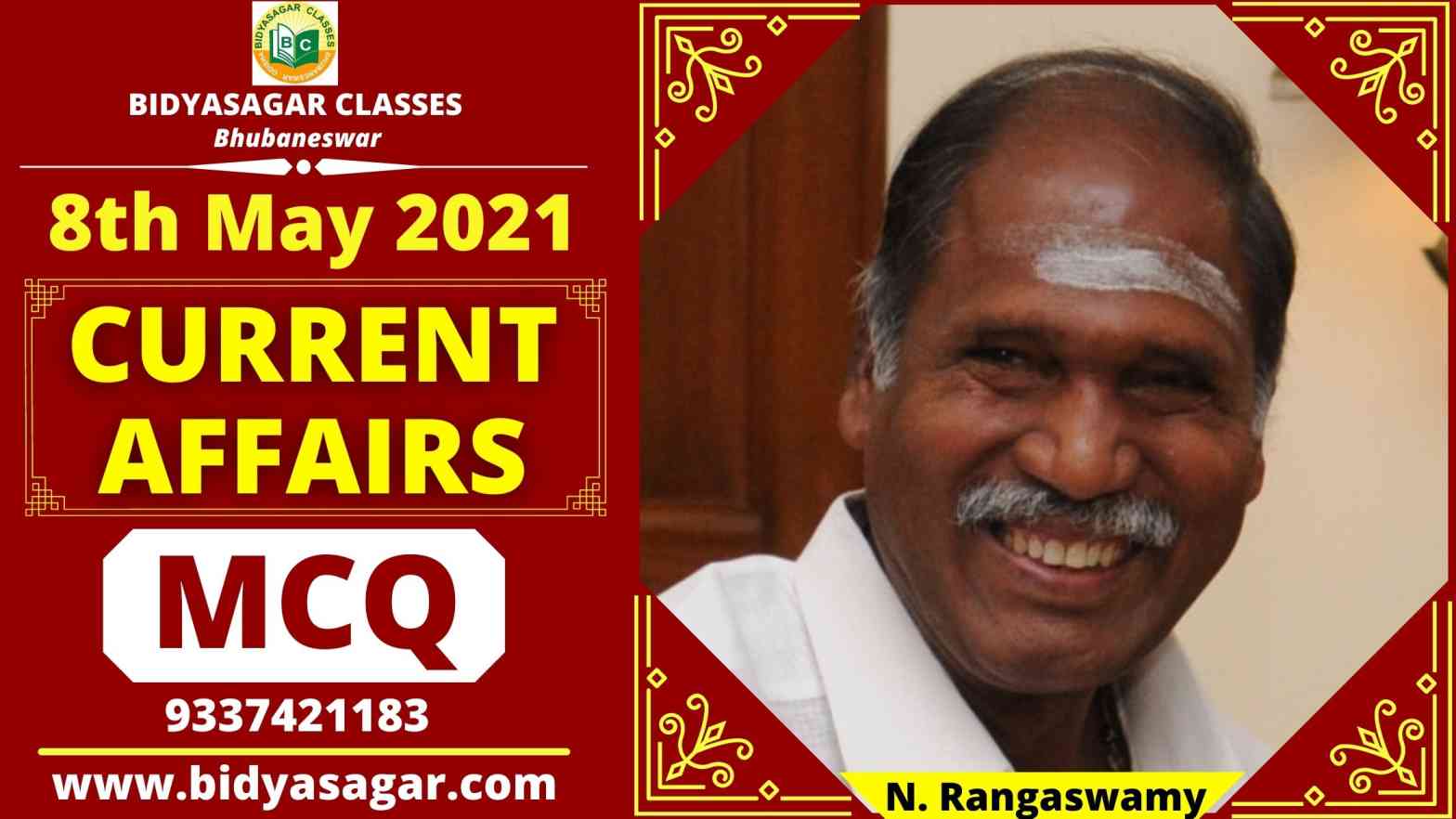 1. Indian Railways has recently included, how many horsepower railway engines to the country’s most powerful electric locomotive “12B”?

2. Which of the following aerospace company has successfully landed the starship SN15 without explosion for the first time?

3. AINRC leader N. Rangaswamy has recently sworn in as the Chief Minister of which union territory?

4. Which country has recently succeeded in making a single-dose vaccine for Corona?

5. Government of which state of India has recently launched Ayurvedic Telemedicine facility for Corona patients?

6. Kerala has recently submitted its annual action plan under which scheme to provide 30 lakh new connections by 2021-22?

7. Ipe Mini and BC Patnaik have been recommended by the Bank Board Bureau for the posts of two new MDs of which of the following companies?

8. China has recently banned all “trade agreements” with which country?

9. RBI has constituted an advisory group to assist the Regulatory Review Authority (RRA 2.0). Who is the head of this advisory group?

10. Who has been sworn in as the new Chief Minister of Tamil Nadu after the 2021 Assembly election?

11. The World Red Cross and Red Crescent Day is observed annually on which day?

12.When is World Thalassemia Day observed?

14. The Time of Remembrance and Reconciliation for Those Who Lost Their Lives during the Second World War, is an UN-recognised day, observed every year on__________

15. Who is the author of the new children’s book titled ‘The Bench’?

16. Vanraj Bhatia who has passed away recently was related to which profession?

17. The Border Roads Organisation (BRO) observes its Raising Day every year on 7 May. In 2021, the BRO is celebrating which edition of its raising day?

18. What was the profession of Shesh Narayan Singh, who has passed away recently?

19.What is the theme of the 2021 World Red Cross and Red Crescent Day?

20.The 2021 World Thalassemia Day is observed on which day?

A. Thalassaemia past, present, and future: Documenting progress and patients’ needs worldwide

B. The dawning of a new era for thalassemia

Indian Railways has included 12000 horsepower engine “12B engine”, India’s most powerful electric engine under Made in India. Which has been made under the Make in India program. This locomotive has been constructed by Madhepura Electric Private Limited.

SpaceX Aerospace company successfully landed the starship SN15 without detonation for the first time. The Starship SN15 became the world’s first such starship prototype that has not been destroyed during its test flight.

Russia has recently succeeded in making a single-dose vaccine (Sputnik Light) of Corona. This vaccine from Sputnik Family is 79.4 percent effective. Sputnik Family Vaccine is currently being used in 60 countries of the world except for Europe and America.

The government of Haryana has recently launched an Ayurvedic Telemedicine facility for Corona patients. Under this, the state health minister Anil Vij has also released the number 1075. By calling, the people of the state can take advice over the phone from Ayurvedic medicine.

Kerala has recently submitted its annual action plan to provide 30 lakh new connections by 2021-22 under the scheme of Jeevan Jeevan Mission (JJM). At present, there are 67.15 lakh, rural families, in the state out of which about 21.55 lakh families have a domestic tap water supply.

Ipe Mini and BC Patnaik have been recommended by the Bank Board Bureau for the posts of two new MDs of the Life Insurance Corporation of India. The post of MD, which will become vacant after Mohanty becomes chairman on 1 July.

China has recently banned all “trade agreements” with Australia. At the same time, China has also stopped the import of many goods including coal, iron, wheat, wine from Australia.

The Reserve Bank of India (RBI) has constituted an advisory group to assist the second Regulatory Review Authority (RRA 2.0), which was set by the central bank on May 01, 2021, to streamline regulations and reduce the compliance burden of regulated entities. The Advisory Group will be headed by SBI Managing Director S Janakiraman.
10. B
Muthuvel Karunanidhi Stalin has been sworn in as Chief Minister of Tamil Nadu on May 07, 2021. Stalin was administered the oath of office and Secrecy by state Governor Banwarilal Purohit.
11. A

The World Red Cross and Red Crescent Day are observed every year on 8 May.
12. B

World Thalassemia Day is celebrated on May 8 every year to commemorate Thalassemia victims and to encourage those who struggle to live with the disease.

The All India NR Congress (AINRC) founder leader N Rangasamy has been sworn in as the Chief Minister of the Union Territory of Puducherry, for a record fourth time, on May 07, 2021.

The United Nations (UN) General Assembly has declared 8–9 May as Time of Remembrance and Reconciliation for Those Who Lost Their Lives during the Second World War.

Meghan Markle, the Duchess of Sussex, is about to release her first children’s book titled ‘The Bench’ in June 2021.

The veteran Music Composer Vanraj Bhatia, who was the best-known composer of Western classical music in India, has passed away after a brief illness. He was 93-year-old.

Veteran senior journalist Shesh Narayan Singh has passed away while undergoing treatment for COVID-19. He was 70.

The theme for 2021 World Thalassemia Day is “Addressing Health Inequalities Across the Global Thalassaemia Community”.