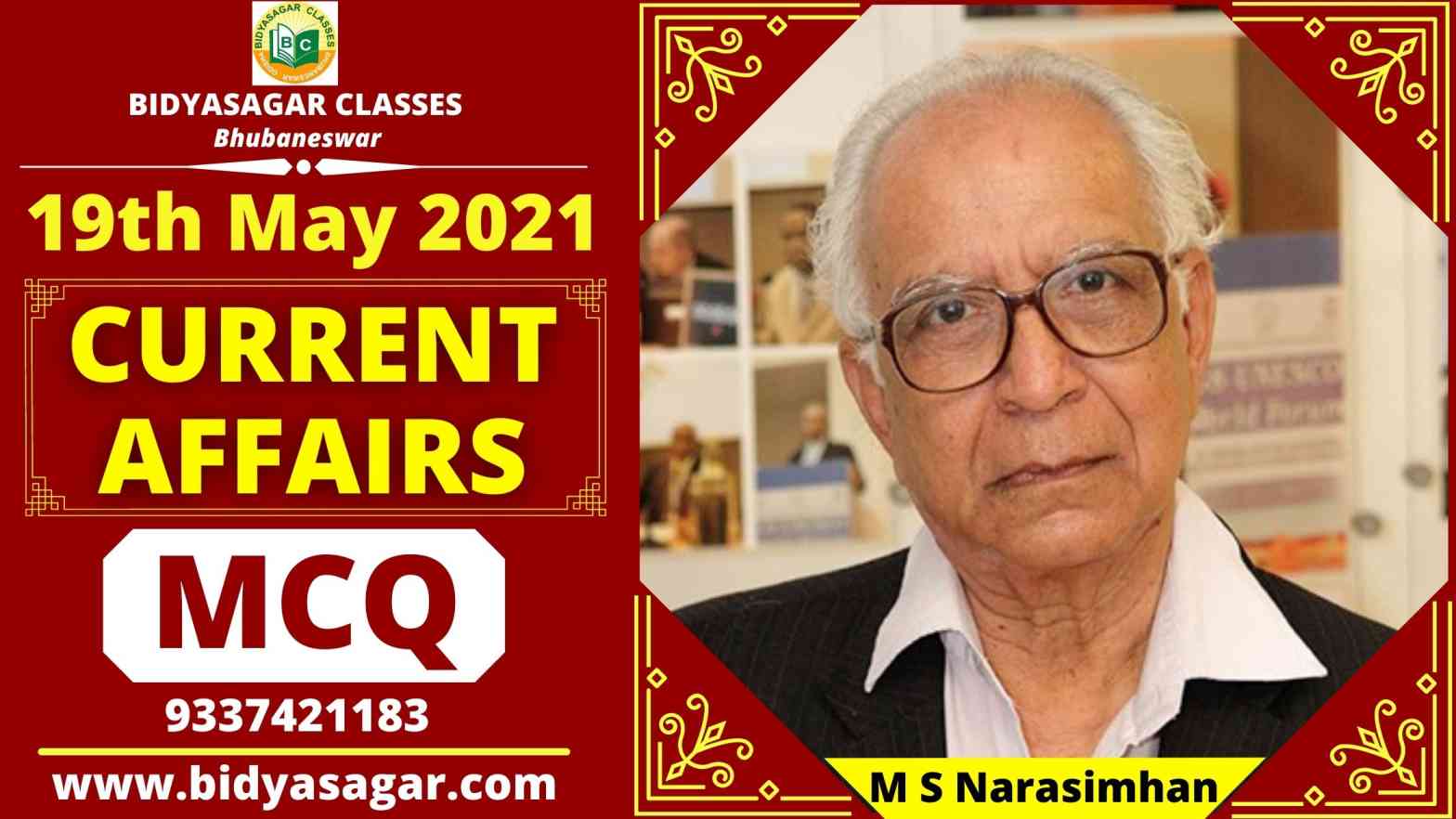 1. Former IMA Chairman and Dr. KK Aggarwal, who has been honored with which award, has recently passed away due to Corona?

2. Which 39-year-old man has recently been appointed as Pakistan’s new National Security Advisor?

3. Recently, the central government has released Rs 5,968 crore for how many states of the country under the Jal Jeevan Mission?

4. In which of the following cities, the National Museum of Modern Art has recently launched the Audio-Visual Guide app?

5. Ministry of Tribal Affairs and which company has signed a memorandum of understanding for the digital transformation of tribal schools?

6. Which ministry has recently started a toll-free helpline Elderline for the elderly in the Corona era?

A. Ministry of Sports

B. Ministry of Information and Broadcasting

7. Who has recently launched an innovation challenge in collaboration with the Department of Higher Education to create an app to learn the Indian language?

8. Secretary of which of the following departments Mr. Anshu Prakash has recently inaugurated an online certificate course on Network Security?

9. Which of the following entity has acquired Indiabulls?

10. Who has become the 1st fighter of India-origin to win a world title in a top-level MMA Championship?

12. Which Indian telecom has joined the global consortium to build undersea cable network?

13. Who has been named as one of the Vice Presidents of the International Council for Advertising Self Regulation (ICAS)?

14. As per the State of Indian Healthcare, _______ ranks 1st among the urban cities of India with adequate health infrastructure.

15. Who has been appointed as the Prime Minister of Mali?

16. Which country will host the 2021 Men’s World Boxing Championship?

18. Which state government has launched ‘My Village-Corona Free Village’ Campaign?

Former President of the Indian Medical Association (IMA) and Padma Shri Awardee Dr. KK Aggarwal has recently passed away due to corona at the age of 62 years. He was awarded the Padma Shri in the year 2010. He completed his MBBS from Nagpur University in the year 1979.

39-year-old Moeed Yusuf has recently been appointed as Pakistan’s new National Security Advisor. He was the special adviser to Prime Minister Imran Khan from the year 24 December 2019. Moeed Yusuf has been the Vice President of the Asia Center at the United States Institute of Peace.

The Central Government has recently released Rs 5,968 crore for 15 states under the Jal Jeevan Mission. While the proposal has been sent to release the funds to the remaining 17 states and union territories. This is the first installment out of 4 installments to be released in this financial year.

The National Museum of Modern Art located in New Delhi has recently launched the audio-visual guide app of NGMA. Through which valuable anecdotes and stories related to the precious Indian modern art displayed in the gallery can be heard anywhere for the visitors of the museum.

Recently the Ministry of Social Justice and Empowerment has started a toll-free helpline Alderline (14567) to address the problems of the elderly during the Kovid epidemic. This facility is currently in 5 states of the country, Uttar Pradesh, Madhya Pradesh, Rajasthan, Tamil Nadu, and Karnataka, which will soon be started in the entire country.

The Government of India’s platform for citizen engagement “MyGov” has recently launched an innovation challenge in collaboration with the Department of Higher Education to create an Indian language learning app. This innovation challenge aims to carry forward the Prime Minister’s dream of promoting India’s cultural diversity.

Mr. Anshu Prakash, Secretary, Department of Telecommunications, Ministry of Communications and Chairman of Digital Communications Commission has recently inaugurated an online certificate course on Network Security. The course has been organized by the training institute National Telecommunication Institute for Policy Research, Innovation, and Training (NTIPRIT).

Andrea Meza of Mexico has become the Miss Universe 2020. She has also won the crown of Miss Mexico. India’s Adeline Castelino finished 4th in the contest.

Arjan Bhullar has become the 1st fighter of Indian origin to win a world title in a top-level MMA Championship by defeating Brandon Vera. Arjan Bhullar has also won Gold medals in Commonwealth games in 2010 and 2012.

Reliance Jio has joined the global consortium to build an undersea cable network. It is currently setting up the largest international submarine cable system in collaboration with Subcom.

Manisha Kapoor has been appointed as one of the Vice Presidents of ICAS. She is currently serving as the General Secretary of the Advertising Standards Council of India (ASCI). She will hold the post of VP of ICAS till 2023.

As per the State of Indian Healthcare, Pune ranks 1st among the urban cities of India with adequate health infrastructure. Ahmadabad has been ranked 2nd followed by Bengaluru. The report has been prepared by Housing.com.

Moctor Ouane has been re-appointed as the Prime Minister of Mali by President, Bah Ndaw. Moctor’s Interim Government will hold a constitutional referendum on 31st October 2021 followed by elections in February 2022.

Serbia will host the 2021 Men’s World Boxing Championship. The tournament has been scheduled from 26th October to 6th November 2021 at Belgrade.

Prof. M S Narasimhan was a renowned Mathematician. He was only India to be conferred with the King Faisal International Prize in Science. He gave the Narasimhan-Seshadri theorem while working with C S Seshadri.

The government of Gujarat has launched the ‘My Village- Corona Free Village’ (Maru Gam Corona-Mukt Gam) Campaign. The objective of the campaign is to stop the spread of the COVID-19 pandemic in the rural areas of Gujarat.