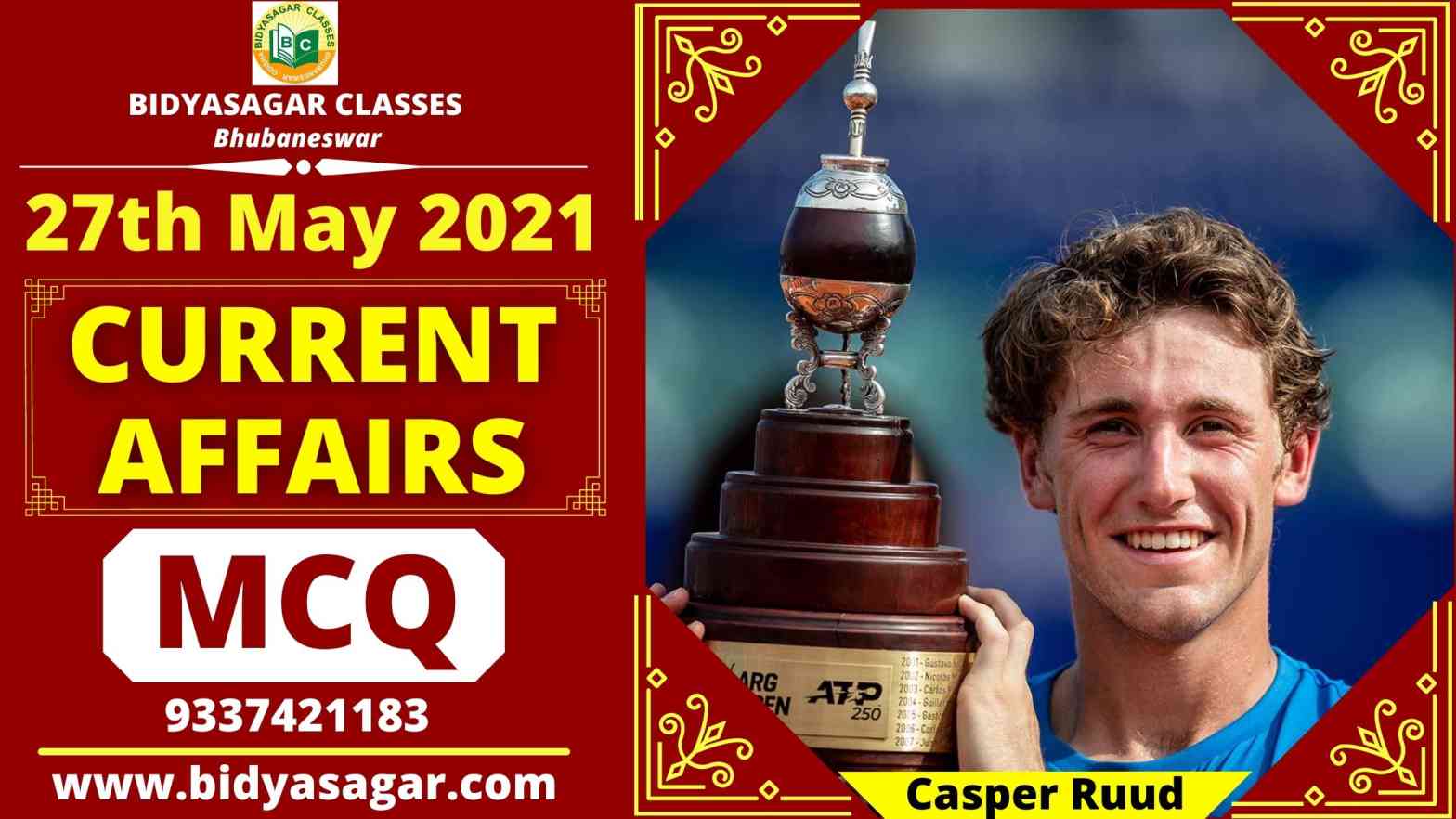 1. Recently, David Barnea has appointed as the head of Mossad. Which of the following nation’s spy agencies is Mossad?

2. Who among the following has clinched the Geneva Open 2021?

5. Who among the following has chaired the 74th World Health Assembly?

6. Which country, India has signed a 3-year program for Cooperation in Agriculture?

9. Who has been appointed Director of the Central Bureau of Investigation (CBI).

10. Which of the following company has bagged the Gold Stevie Award 2021?

12. What is the new name of Mohali International Hockey Stadium?

14. According to SBI research, what is India’s economy may have contracted in FY21?

16. Which animal will be re-introduced in India from Africa in November?

17. Which campus of IIT has developed a ‘FakeBuster’ detector for finding the imposters attending a virtual conference?

19.Who has become the 1st Indian to win Rudolf V Schindler award?

20. Who has been appointed as the Director of CBI?

Casper Ruud won the ATP Geneva Open final with a 7-6 (8/6), 6-4 victory over Denis Shapovalov. Victory in Geneva means the Norwegian world number 21 is going to be among the top 16 seeds in Paris.

The President of the Republic of Congo, Denis Sassou Nguesso has appointed Anatole Collinet Makosso as the country’s Prime Minister.

Foreign direct investments (FDI) into the country grew 19 percent to USD 59.64 billion during 2020-21 on account of measures taken by the government on the fronts of policy reforms, investment facilitation, and ease of doing business.

Barclays has pegged India’s economic growth for fiscal 2021-22 (FY22) – as measured by gross domestic product (GDP) – at 7.7 percent in the bear-case scenario if the country is hit by the third wave of the Covid pandemic going ahead.

IPS officer, Subodh Jaiswal has been appointed Director of the Central Bureau of Investigation (CBI). He was the most senior officer among the three shortlisted for the post of CBI Director.

SpiceHealth, a healthcare company founded by the promoters of SpiceJet, has won the Gold Award at the 2021 Asia-Pacific Stevie Awards for ‘Most Valuable Medical Innovation’ under coronavirus disease (Covid-19) response category.

Vesak, the Day of Full Moon is the most sacred day to Buddhists all over the world. Vesak Day 2021 is observed globally on 26 May.

The National Payments Corp. of India (NPCI) has partnered with Turkey’s global payment solutions company PayCore as one of the certified partners for RuPay SoftPOS to drive cashless payments across the country.

India’s GDP is likely to have grown at 1.3% in the fourth quarter of 2020-21 and may have contracted by about 7.3% for the full financial year, according to an SBI research report ‘Ecowrap’.

Union Cabinet, chaired by Prime Minister Narendra Modi has approved the opening of a new Consulate General of India in Addu City, the Maldives in 2021.

Cheetah will be re-introduced in India from Africa in November. It got extinct in India in 1952. It will be brought to Kuno National Park in Madhya Pradesh.

Indian Institute of Technology (IIT) Ropar has developed a ‘FakeBuster’ detector in collaboration with the Monash University of Australia for detecting the imposters attending a virtual conference. The detector can also detect manipulated pictures of faces on social media used for defaming someone.

Ana is the first named Atlantic storm of 2021 forming near Bermuda. Ana has been located 270 miles away from the northeast of Bermuda with a maximum wind speed of 45 mph.

Dr. Nageshwar Reddy has become the 1st Indian to win the Rudolf V Schindler award. He is a noted gastroenterologist who has also been awarded Padma Bhushan.

Subodh Jaiswal has been appointed as the Director of the Central Bureau of Investigation (CBI). He was serving as the Chief of Central Industrial Security Force (CISF). He will hold the post of CBI Director for two years.